Ok, so the Hi-Point .45 is not going to win any beauty contests.

It’s a big, heavy lump of a gun that looks and feels pretty cheap. In terms of accuracy, a gun at this price point is never going to be up there with a Glock.

But for some purposes, the Hi-Point .45 does just fine. Ultimately, the best gun is the one you have easily to hand, and as a self- and home-defense weapon this pistol does the job.

When you factor in that it is cheaper than almost any other pistol on the market, it actually starts to look like a pretty attractive firearm.

It’s not, of course, going to suit the needs of everyone. If you are looking for a pistol to shoot in competitions, move along.

Similarly, if you regularly visit the range, and want a pistol that you can put thousands of rounds through comfortably, the Hi-Point is not for you.

Background of the Hi-Point 45

I have to say, when I first got this gun for review, I was skeptical.

Even though I had read lots of comments from some pretty serious enthusiasts, saying that the Hi-Point is a surprisingly good gun, it just looks cheap. This is why it’s so surprising that it turned out to be a pretty good gun.

First, a bit of background. The Hi-Point .45 was never designed to take on the best Glocks on the market.

Instead, the designers focused on making a reasonably powerful pistol for the lowest possible price. This philosophy is reflected in everything about the gun, from the alloy used on the outside to the basic equipment it comes with.

They certainly achieved their aim in terms of price. Even the most expensive Hi-Point pistols can be had for under $200, and some can be picked up for a lot less.

The gun is also rated for +P ammunition, meaning that it potentially has a lot of stopping power. The accuracy when using this ammo is not the best – I’ll come onto that shortly – but hitting an intruder with a +P bullet is a sure way of getting them to pay attention. 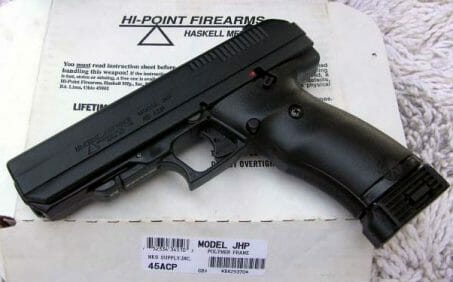 In truth, my very first impressions of this gun were all related to its weight. It is super heavy. I mean, I know some Glocks and other premium pistols can be quite bulky, but the Hi-Point is something else.

There are a couple of reasons for this. First, the slide is made of some dense Zinc alloy, and I guess it needs to be bulky to counter the fact that this alloy is not as strong as that on some more expensive pistols.

In addition, the slide is so big because the gun uses a slightly different mechanism than most other pistols – a blowback system. Instead of a bullet’s inertia pushing the slide back, the hot expanding gases from the bullet do this.

Whilst the weight of the gun has some significant disadvantages – you are not going to want to carry this pistol around for very long, and forget about concealed carry – it does have some upsides.

Prime among these is recoil. The heavy slide absorbs a significant amount of the recoil, meaning that the gun can comfortably be used by those who are not so used to firing full .45 pistols.

This makes it a great home-defense weapon, and a great one for keeping in the bedside cabinet. This also has the advantage of nobody being able to see this gun, because the second thing I want to mention about my first impressions was just how ugly this pistol is. And trust me, if you think it looks bad in the pictures, just wait until you’ve got it in front of you.

That said, we can’t all be beautiful, and while it’s nice to have a good-looking gun, here at GND our focus has always been on how well things work. With that in mind, let’s look at some of the more technical aspects of the Hi-Point .45.

Well, you’re going to need tools to strip this pistol down. This, in itself, marks it out as slightly inferior to many other pistols.

Nowadays, it’s possible to get a decent pistol that requires just your hands to take apart, but not this one.

If you’ve got the correct tools, however, it’s not too hard. Pick out the right sized punch, and gently hammer the pin out. If you take your tools to the range, great. If, like the rest of us, you leave them at home, any faults with this gun are going to get seriously annoying.

Once broken down, however, the gun is pretty easy to clean. The fact that this is such a simple pistol means that there are no interesting nooks inside the barrel or elsewhere, so a standard cleaning kit will do the job well.

This is where the chunky, bulky design of that slide comes into its own. With such an over-sized gun, you can literally put whatever trashy ammo you want through it.

We tested the Hi-Point .45 with a bunch of cheap bullets, and it managed to get through them all without raising a fuss.

We can’t really speak, at the moment, about the long-term reliability of the gun, having only put a few hundred rounds through it.

However, I reckon that most people who buy this pistol are just looking for a cheap and powerful bedside gun, and so the pistol is unlikely to see many more rounds than that over its lifetime.

While the safety features on this gun are pretty minimal, those that are included feel really solid.

In line with a lot of budget pistols, you get a frame-mounted safety catch that’s pretty easy to use with your thumb. In addition, the magazine disconnect means that the gun is unable to shoot unless a magazine is connected.

It’s also got a couple of safety catches to keep you (and everyone else) safe if you drop the weapon.

And that’s it. Notable by its absence is a trigger safety, a feature I know that a lot of people feel more comfortable having on their pistols.

Trigger discipline is therefore a must, though in truth it’s unlikely you are going to be carrying this gun around much. The same can be said for the lack of a firing pin block – whilst this could be a problem for those carrying the pistol with a round in the tube, in reality no-one is going to do that.

This, as I said above, is more of a night-stand gun. It will be able to hit intruders at short range with a powerful round, but is not the kind of weapon you want to be carrying around all day. This is also a great choice to put in a bedside gun safe.

When you first pick the Hi-Point .45 up, the first thing that strikes you is that the grip on this pistol is a little strange.

I’m not sure if Hi-Point designed the pistol like this, or it is an accident, but you will have to modify your grip if you are used to Glocks. Or, in fact, any other type of pistol.

If you hold your thumbs in the “normal” position, they cover the slide. This is obviously not ideal, because as each round goes off your thumbs are in the way. This will hurt.

Apart from this slightly freaky grip, the performance of the pistol on the range is pretty good. The recoil, as I’ve already said, is actually quite minimal. The trigger is a bit stiff, but the pull is not very long, and after some practice you can get pretty effective with this pistol.

Well, technically the Hi-Point .45 can be modified quite a lot, in that it incorporates a rail for lasers and flashlights. The catch is that only Hi-Point accessories will work with the gun, giving you pretty limited options.

There are a few third-party magazines made for the gun, but in truth this is not a gun that you are going to mess around with, and so the lack of accessories is not such a big problem.

When I first got the Hi-Point .45 and started to write this review, I thought I was going to be able to make a lot of jokes at its expense.

Whilst this review would have been funnier if the gun was bad, it is actually surprisingly good.

I’m not going to head down the range with this weapon any more than is strictly necessary to get used to it, though.

It remains a really ugly gun, no matter how useful in some other respects. While the accuracy is not going to be good enough for competition shooting, it will be enough to protect you in a home-defense situation.

Overall, then, I would recommend this pistol for those who want a reasonably powerful night-stand gun.

The light recoil means that even those unfamiliar with .45s will be able to use it with a little practice, and the bulky design promises many years of reliable service in this limited role.