The Taurus Curve pistol is an epitome of the rapid innovations taking place in the firearm arena. The manufacturer adopted a simple design that also enhances its concealability. Being a “pocket pistol” the Curve requires a holster that enhances its incredible features.

The best Taurus Curve holster with the current options in the market is the Custom Kydex holster. The holster is advantageous in that it is made of durable Kydex material. Also, the holster provides different carry mode options including appendix and inside waistband carry styles.

Design of the Taurus Curve

Just like its name, the gun’s frame housing has a curved feature that allows it to hug the contours of the user’s body. The pistol has no corners as the edges are arched. The feature makes it easy to conceal the weapon, as it prints on clothes like a smartphone in the pocket.

The Taurus Curve is simply comfortable and reliable for anyone looking for a self-defense gun. It is also among the lightest firearms. The magazine catch is a paired button on either side of the magazine extending up to the grip area.

The user has to punch the magazine using the left hand to remove it. There are non-slip panels on the front and back of the grip area. The other sides of the frame are made from matte-finish polymer.

There are also two dished-in areas on the right side for the trigger finger and the left end of your thumb. Other incredible features in the design of the Curve are the built-in light and laser. The laser acts as the primary sighting system, which would be helpful for anyone with poor vision.

Things to Consider when Choosing a Holster

Choosing the most appropriate holster should not be a difficult task if one has the right information. While price is a major consideration when buying a holster for a gun, comfortability, durability, and ease of use should also be considered.

The factors will inform your preferences and ultimately your choice. The following are five main things to consider when choosing a holster.

Primarily, a firearm should comfortably fit in the holster. A tight holster may hamper efficient drawing when the need arises or may result in accidental discharge. Where the gun is smaller than the holster, it may fall out during movement or when in a particular posture.

An improper fit will certainly lead to risks, such as losing your firearm, having the weapon being accessed by unauthorized people like children, or even exposing it in a public setting.

Therefore, one should ensure that the holster not only protects the gun from physical damage but also protects the trigger from the accidental pull. All users should visit a credible store to try out the available options.

Any buyer wishes to go for a product that does not compromise comfort. It is no exception when shopping for a holster. Simply, if a holster creates any discomfort, you will have no business having it on.

Any gun owner understands the importance of moving around with it without drawing any attention. The design of Taurus Curve has made it easier to conceal the weapon at any setting, whether in public or private gatherings. The Holster should not result to print concerns or exposure the firearm.

To some extent, the ability to successfully conceal a weapon is influenced by choice of clothing. Some guns require a particular way of dressing to enhance their concealment. Your wardrobe and dressing should also be considered when shopping for a holster.

The primary aim of having a gun is personal protection. The choice of a holster should, therefore, reinforce this primary use. A holster should allow the user to draw the weapon within the shortest time possible when the need arises.

Although the speed at which one can draw a weapon varies with experience or practice, an improper holster will aggravate the situation. Another essential element under this factor is choosing the right position for your gun. Some people may consider having it on the back or beneath their shoulders.

The choice of a holster should reinforce your most preferred position to keep your gun. Also, the holster should allow the user to gain a firm grip on the weapon and at the same time release any retention devices. Mainly, the draw stroke should provide the user with a straight-line draw for natural pointing towards the target.

Holsters now come with retention devices to help the user retain the firearm even in deadly attacks. Some of them include straps or simple thumb breaks. Based on the use of your firearm, a poorly fitting holster poses the risk of dislodging the pistol or slipping away from the user.

Although the Taurus Curve has a good retention, its complementary holster should enhance this feature.

Another key element to consider is the durability of the holster. While this may vary with the manufacturer, it would be advisable to consider the materials used. The materials should be durable and also enhance the holster’s ability to meet the factors mentioned above.

It would also be crucial to consider the maintenance requirements of a holster. For instance, plastic based holsters require less maintenance when compared to leather holsters. A gun owner should, therefore, go for a holster they are willing and able to take care.

The types of holsters suited to a Taurus Curve pistol varies with the manufacturer, material, or position of the firearm. The main materials used in the modern manufacturing of holsters are leather and plastics.

The primary classification of holsters is based on the mode of carrying, such as cross draw, back, appendix, or ankle positions.

Ankle holsters just like their name are placed on the ankle area of a user’s foot. The method relies on a pull-through type of retention straps. Ankle holsters are usually used for backup weapons. One shortcoming of ankle holsters is that they can be quite uncomfortable, especially for people who move around a lot.

The additional weight on the leg may hamper normal walking. In addition to this, the weapon can only be accessed if one kneels or bends. It takes a lot of practice for gain speed to draw out the weapon.

Appendix carry refers to the mode of carrying a weapon in the front part of your pants. Simply, it is between the first and second belt-loops from the zipper. The style is highly concealable as potential imprints remain hidden.

It’s a suitable carry position due to its natural hand placement, making it easier and quicker to reach your firearm. The only disadvantage with appendix holsters is that it can be uncomfortable if the user is a little thicker during bending or sitting.

Shoulder holsters are carried beneath the shoulder on either side of the chest. It can allow a user to carry several firearms at a time. Besides being adjustable owing to its multiple points, the holsters are highly concealable.

Below are some common holsters for the Taurus Curve.

The holster is made from leather and Neoprene, a synthetic rubber produced through polymerization. The holster has two different types of holsters, namely thumb break and exclusive molding process.

The thumb break moves over the rear of the weapon’s grip while the latter where duplicate firearm features secure the gun in the holster. To allow easy adjustment, the holster has two fasteners with an allowance that can accommodate different body sizes.

Although ankle holsters may be uncomfortable for users who move around a lot, this product is comfortable and concealable.

• The holster is very comfortable.
• The thumb break style allows for better retention.
• The holster fits well as it is has been customized for the curve
• The product is durable considering it is made from 100% cowhide and Neoprene.

• It is relatively difficult to draw the weapon, especially for inexperienced users.
• Drawing of the gun is limited to use under certain postures, that is, kneeling or bending.
• Restricted for concealing backup weapons only.
• Limited to right-handed users only.

The holster is widely known for being simple with no additional straps or clips. It derives its name from the fact that it is made of gripping material. The holster’s gripping material relies on the waistband or pocket friction for an efficient drawing of the weapon.

The product is ambidextrous thus friendly to any user, as one can position it on the most preferred or stronger side. The holster is suited to both pocket and waistband placement. With a closed end, the trigger is fully covered when the weapon is holstered.

The padded sides make the holster comfortable a feature that complements its high concealability.

• The holster is comfortable and also affordable.
• It does not have clips or snaps which may affect its efficiency when the break.
• It is highly concealable.
• Suitable for both right-handed and left-handed users.

• The holster relatively less durable when compared to leather-based and Kydex products. 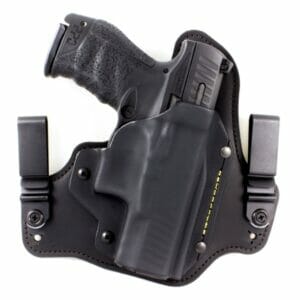 The holster is mainly made from Kydex, a thermoplastic based material. The material is known to be durable, scratch resistant, and waterproof. It also has low friction and maintains its shape as it does not stretch or shrink due to change in environmental factors.

The belt clips for the holster are injection molded nylon that offers maximum strength hence enhancing its long lasting capability. The clips allow a user to either stuff it in the appendix carry mode or inside-the-waistband carry method.

• The holster maintains its shape over an extended period.
• The Kydex material ensures the holster is durable.
• The holster has minimal maintenance requirements.
• Water and scratch resistant

• Prone to breaking due to the hardness of Kydex material.
• The hard material makes the holster less concealable as a result of imprints.

It is evident that the Taurus Curve is relatively new in the arena of pistols thus the small number of available holsters. The Curve traditionally comes in Kydex holsters that are long lasting. 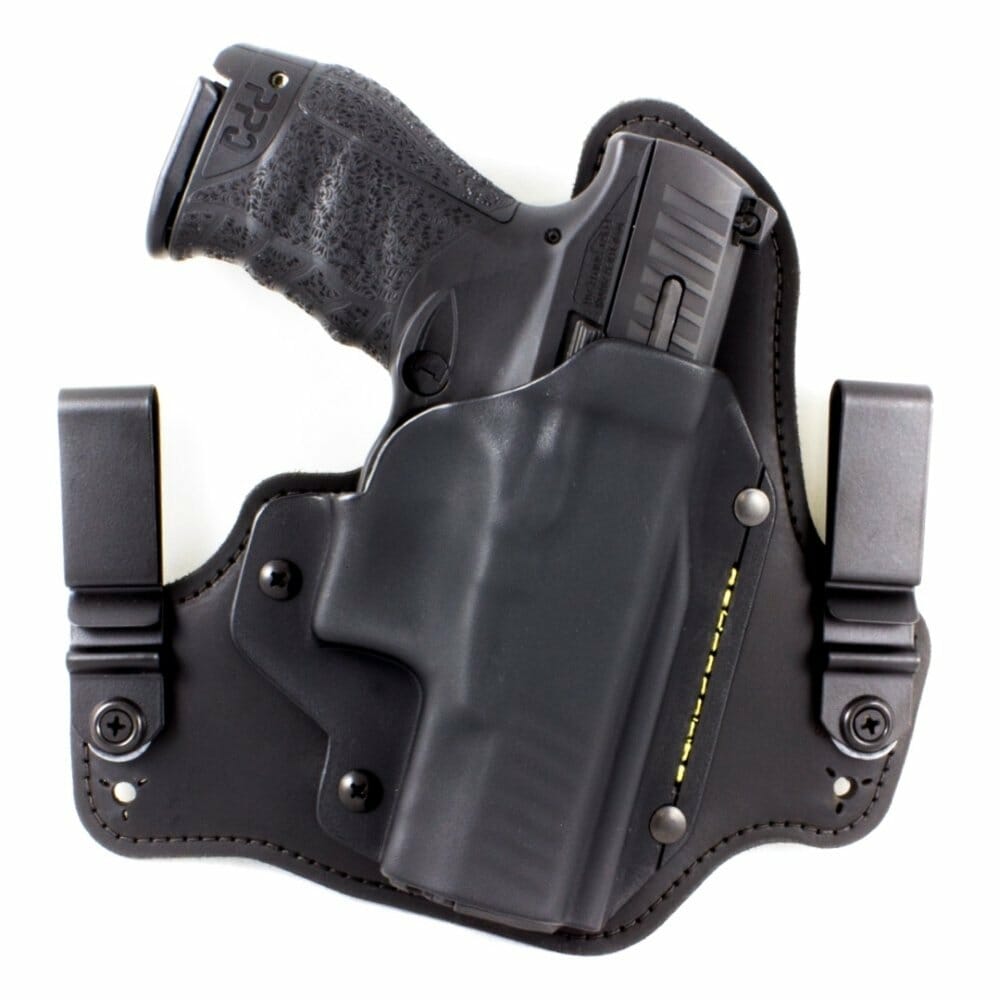 The holster is mainly made from Kydex, a thermoplastic based material. The material is known to be durable, scratch resistant, and waterproof.

The Custom Kydex holster is suitable for Taurus Curve, as it has the option of appendix carry or inside-the-waistband carry mode. The holster requires less maintenance when compared to leather-based holsters and more durable than holsters made from gripper material.

Unlike the ankle holster that is limited to use as a backup firearm, the Custom Kydex holster can be utilized as both the main or backup gun.