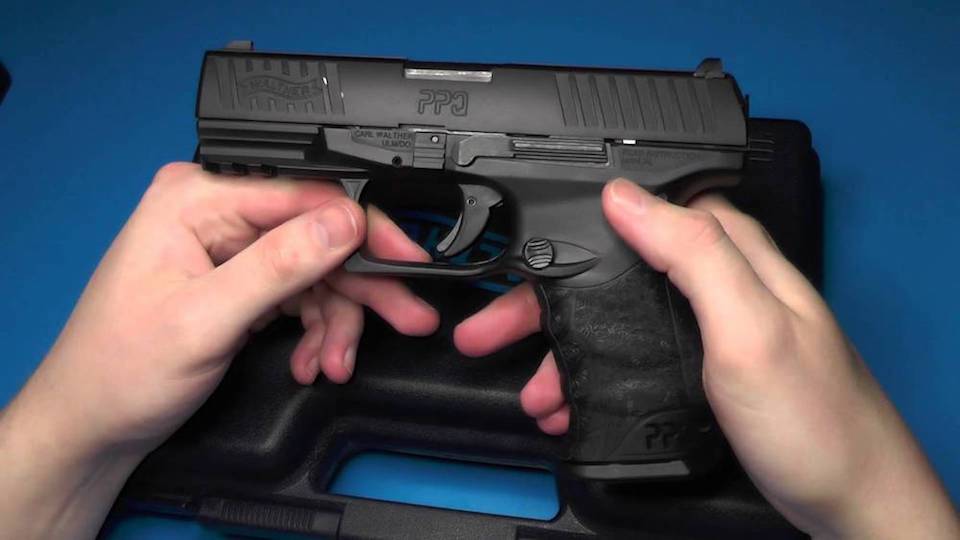 Out of all the handgun manufacturers in the world, perhaps none is as overlooked or underrated as Walther.

Walther has consistently been producing high quality firearms since 1886 and many of their pistols are among the most iconic in the world, including the PPK, P38, and the P99.

Their pistols serve as the sidearms for numerous militaries and law enforcement agencies across the globe, but through it all, Walther never seems to be held in as high regard as other companies such as Glock, Smith & Wesson, HK, or SIG Sauer.

Why is this? Who knows.

But one thing is for certain: Walther makes good stuff and their products really deserve more attention. One such product is their PPQ pistol.

The PPQ caused quite a stir back when it was first released in 2011 for one simple reason: the trigger.

We’ll talk about the PPQ’s trigger and its many other features and uses in this article.

What Is The PPQ?

In a nutshell, the PPQ is a development of the P99 pistol. The P99 was first released in the mid-late 1990s and was unique because it essentially combined the DA/SA trigger mode with the striker fired pistol. In other words, it was like merging the trigger system of a SIG P226 or Beretta 92 with a Glock. 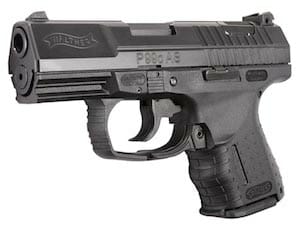 To this end, the P99 was one of the most innovative pistols of all time. The first shot was long like a DA trigger pull, while all subsequent shots were short.

If you desired your first shot to be short, rather than manually cock a hammer, you would instead pull the slide rearward by a quarter of an inch. To decock the weapon, you would simply press a button on the top of the slide.

The P99 is a truly excellent weapon built to the same standards as Glock, and it was adopted by many European militaries and police forces as their standard sidearm.

But in the United States, the P99 just never took hold. Glocks had taken over and people were wanting striker fired guns with a single action only trigger. 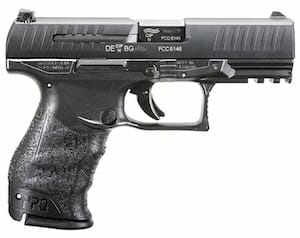 In 2011, Walther sought to change this by developing the P99 into the PPQ (called the P99Q in Europe). The PPQ is simply a P99 with improved ergonomics and with a Glock style trigger, only it was much lighter and crisper in comparison to other guns on the market.

The PPQ with the paddle release (called the PPQ M1) will even accept the same magazines as the P99, and the two pistols are compatible with holsters and many other accessories.

The PPQ is much like a Glock in terms of its design. It lacks an external safety (except for the bladed safety in front of the trigger that must be depressed in order for the trigger to be pulled), is striker fired, and takes down largely the same way. 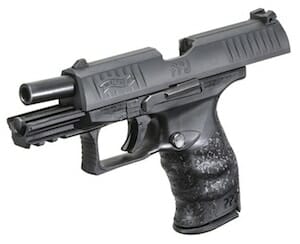 But the PPQ has many other features as well. For one thing, it has an extended and ambidextrous slide release lever for convenience and to accommodate both right handed and left handed shooters.

It also sports a red loaded chamber indicator on the right hand side of the slide, and a Picatinny rail on the bottom of the frame, which makes it easy to add lights or lasers.

The ergonomics are also excellent, and while this is largely subjective, the grips do have aggressive texturing and are designed to be extremely comfortable to hold in the hand with their three finger grooves and natural grip angle. Walther pistols are well-known across the board for being some of the most ergonomic in existence.

Three back straps are sold with the gun: small, medium, and large. Swapping out the back straps is simple and will require you to pop out a pin at the base of the grip with a screwdriver or something similar.

But by way and large, the most prominent feature of the PPQ and the feature that has caused it to stand out among its competitors is the trigger. The five pound trigger pull is very light and crisp, with a nice break and very short reset. Walther markets it as being the lightest trigger pull of any striker fired pistol on the market. 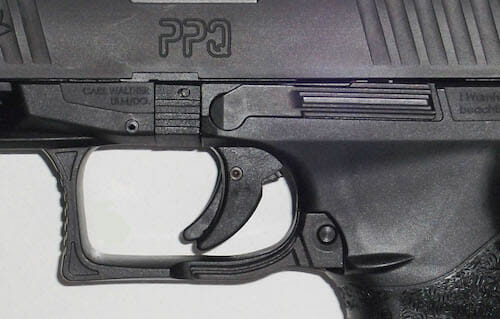 There’s no denying that the trigger pull on the PPQ is lighter and crisper than the one on the Glock or the M&P, both of which can honestly be a little mushy. Examples of other striker fired guns with trigger pulls that are comparable to the PPQ include the CZ-P10C, HK VP9, and the Canik TP9SA/SF (which is basically a Walther clone).

Two aspects of the PPQ that should be noted, and many people will perceive these aspects as being negative, are polymer guide rod and plastic factory sights. Both can easily be replaced, but it will be an added expense and is something you need to know about.

The PPQ is an excellent quality pistol. Both the P99 and the PPQ have been put through numerous extreme torture tests by militaries and law enforcement units all over the globe and have performed very well on them. 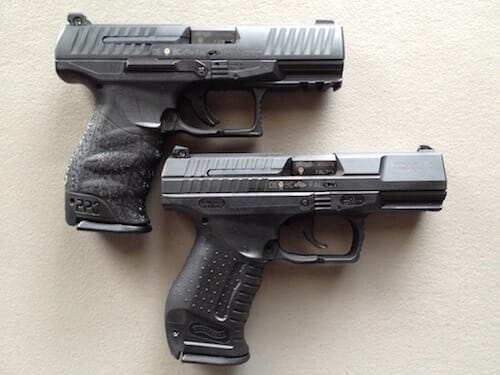 The PPQ is a reliable handgun that will feed just about anything you put through it. The slide is steel and built with a very durable Tenifer finish, which is the same finish that Glock uses and is extremely rust and corrosion resistant.

Customization is one area where the PPQ falls a little short, at least in comparison to more popular guns such as the Glock, S&W M&P, or the Beretta 92. 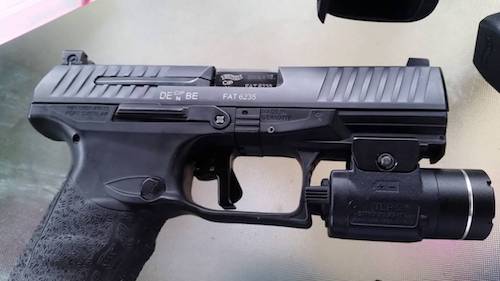 That being said, this is going to change as the gun becomes more popular, and there are already more customization options for the PPQ now that there were just last year or the year before and earlier.

As far as aftermarket support goes, you will have no trouble finding extra sights, triggers, guide rods, or holsters to use for your gun. The guide rod and sights in particular are two things that you would be wise to replace with metal ones.

The Walther PPQ is available in four different calibers and many different variants. The calibers are .22 LR, 9mm Luger, .40 S&W, and .45 ACP. Out of these, the 9mm is by far the most popular option. 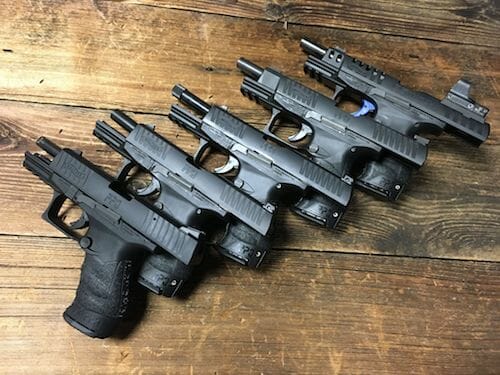 Besides the caliber differences, the PPQ is also available in different sizes. The standard model features a barrel length of 4 inches (4.25 inches with the .45 ACP version). Walther also makes versions of the PPQ that have longer barrels, target features, as well as an SC (subcompact) version that is roughly the same size of a Glock 26.

In summary, here is a list of the current production variants of the Walther PPQ: 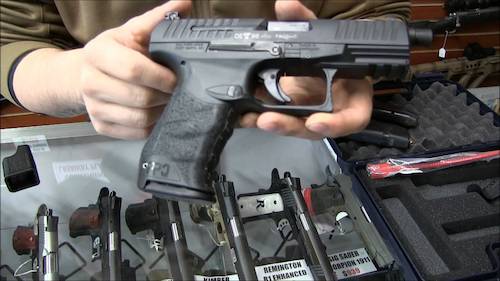 In summary, here is a list of advantages that the PPQ provides:

The PPQ is commonly available in the $500 to $600 range, which is about the same price you can expect to pay for a comparable Glock or Smith & Wesson M&P.

At that price point, you’re getting a lot of gun for the money with the PPQ. It’s reliable, accurate, and has some of the best ergonomics and trigger pull of any striker fired pistol that you can currently buy.

4 thoughts on “Walther PPQ: The World’s Most Underrated Pistol”