As anyone who hunts can tell you, stealth is the name of the game. This is especially true in a SHTF situation where you need to cover your butt in a timely fashion without drawing a lot of attention to yourself.

I can tell you from experience just how much it sucks when you’ve announced yourself to any or all inhabitants of the forest and you’ve shown up to your surrounds ill-prepared.

For this reason alone, it’s worth getting your hands on an air rifle or two. They’ll never disappoint and I’ll tell you why.

For starters, they beat the traditional BB or pellet gun every time because of their power and performance. But let’s get into the four major reasons why owning an air rifle will give you the edge you need in a post-SHTF scenario.

Your biggest disadvantage as a hunter is the noise that you and your gun make. Whether it’s the crackle of branches under foot when you’ve got boots on the ground or the commotion of pulling back your slide or cocking your lever action rifle, hunting can become a whole lotta cacophony.

The number one benefit to buying an air rifle is that they can be as loud or as quiet as you want them to be with some being almost completely silent and others issuing a formidable boom. You won’t be needing high quality ear protection when shooting air rifles.

Hands down, my absolute favorite air rifle is the Gamo Silent Cat, an impressive break barrel weapon that operates on a spring powerplant which compresses an air chamber. 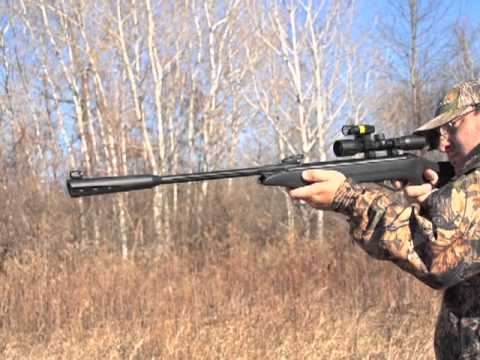 It’s extremely user-friendly and can be loaded and reloaded quickly and with ease. Chambered for .177 cal., this sucker packs some serious heat and comes equipped with a deluxe recoil pad. You get all the bells and whistles with this one, including a 4×32 scope and adjustable 2-stage SAT (Smooth Action Trigger).

Cock Til You Drop

As I mentioned earlier, you can easily give up your position when reloading or cocking your firearm. Many rifles are cumbersome to cock and can have you struggling when you’d rather be narrowing in on a kill.

The aforementioned air rifle and many fine air rifles like it feature break barrels which enable you to easily cock your weapon by breaking the barrel down on its hinge, loading your match grade .177 ammo and simply returning the barrel to its upright position.

This can take the headache out of the cocking and loading process and typically prevents against the gun getting jammed because it’s damn near impossible to load your pellets the wrong way.

Variety is the Spice of Life

In this way, you get to tailor your gun to the situation at hand, not to mention give yourself an additional option if you should see fit to do so. 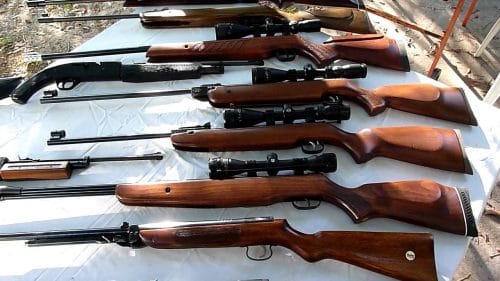 There has been much debate among the gun loving community as to which is better—the .177 or the .22. IMO, I think the .22 blows the .177 right outta the water every time. But you may feel differently. I always say, “Don’t knock it til you try it.”

With that in mind, I recommend you give each caliber its day in court and see what you think.

22 cal ammo usually makes for a heavier pellet which means that it can do much more damage than the .177. But that’s a subjective take on the matter, I’ll admit.

However, one irrefutable fact about the .22 is that it can be more accurately and easily inserted into your rifle than the .177 because it’s not so small (be honest, if you’ve ever handled a BB or pellet gun, you’ve doubtlessly spilled the little buggers all over the ground at some point). 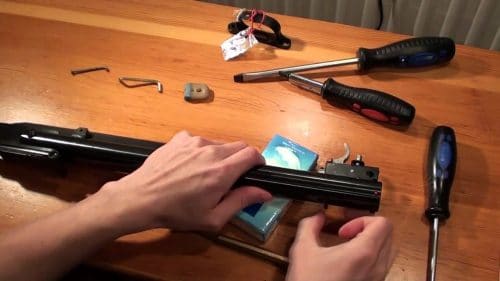 That brings us to the best part of all. By now, you’re already planning on purchasing an air rifle. Maybe you’re canceling vacation plans so you can afford a top of the line rifle. Perhaps you’ve even worked a gun safe and/or gun safe dehumidifier into your budget.

So why should you have to pay for ammo on top of all the other crap necessary for a proper hunting experience? You shouldn’t.

Which is why I’m gonna lay out a simple, easy way you can make your own ammo at home from a cast of your existing pellets.

For a more detailed variation on this method, you can check out YouTube where some smart dudes have posted some informative videos showing you how to make premium ammunition in your own backyard.

Step One: First, you’ll need to assemble the following items:

Step Two: Once you have all these items in place, you want to clamp the pliers in the maw of your vice. From there, you make a punch on the desired area of the pliers.

Step Three: Drill the pliers using the smaller of the two drill bits. Make sure you don’t drill all the way through the pliers or you might as well throw the whole heap in the trash and start over.

Step Four: Clamping down again on the post-drilled pliers, you’re gonna drill the opening with the larger drill bit, making for a depth of 1mm minimum.

Congrats, hombre. You’ve got your pellet cast. Now all you’ll need is some molten lead.

In summary, there are a lot of great air rifles out there and it’s in every shooter’s best interest to have one when hunting. In life, it’s always good to be prepared ’cause you never known when push will come to shove.