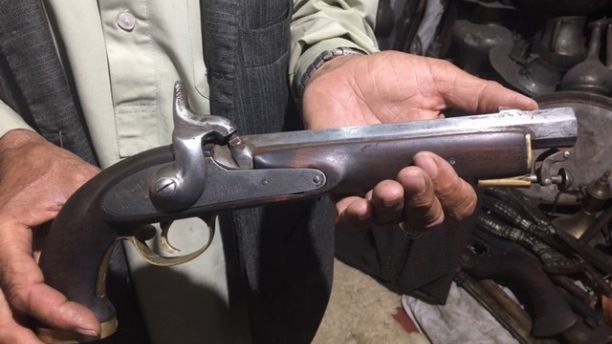 In the place you might least expect, the basement of the Mullah Shams market on Kabul’s Chicken Street in Afghanistan. Store owner, 69-year-old Tawakal has spent decades collecting and restoring ancient weapons, some hundreds of years old, from all over Afghanistan. The modest store, called simply Tawakal, has nearly 200 weapons in stock.

These weapons are too old to be operational, but Tawakal says he sometimes lends them to museums. “We have guns, knives, swords. Everything is historical,” he says.

Tawakal says his favorite of all the weapons is a handmade flintlock, a “Chaq maki”, that he says is hundreds of years old. The muzzle loader is on sale for $1,000, but Tawakal believes if he could export it, the firearm would fetch 10 times that amount.

Speaking Farsi, he says, “Before this gun, Afghans had to fight by the sword. This is what was used to push back the British Army.” When speaking of fighting, Tawakal references three different wars fought between Afghanistan and Britain in the 19th and 20th centuries.

The shop also has a British-made 1863 Tower rifle made for artillery gunners, an 1860 Lee-Enfield, an antique Belgian Martini Muscat and a Martini-Henry. The Enfield rifles were produced in the late 1800’s, and around 1895 were redesigned to accommodate smokeless powder. The Martini-Henry, first used by British forces in 1871, and the Enfield were used by cavalry, artillery, and special troops.

The smallest gun in Tawakal’s collection is a Safavid that might date back several hundred years. Tawakal says it has “a story that goes back a long, long, time. This was used by the Safavid army when they had no other fun for fighting.” They ranged throughout Persia in the 18th century.

A “Sachma” gun selling for $250 is a black powder, and he demonstrates how a soldier would load gunpowder, called “barood” in Urdu, and light the match to shoot the lead ball, or “sachmah”.

Also in his collection is an Afghanmade “Sorbi Yak Taka”, a single shot firearm. It might be a clone of the British Martini-Henry rifle, a big part of the British Empire around the world until the 1800’s, when cartridge firearms slowly replaced muzzle loaders. Tawakal claims it was used by the Amanullah army about 100 years ago, and has the matching sword, both for $600.

And his store isn’t just about firearms. Tawakal has a vast number of antique swords, many of which hang on the walls of the shop. Some of his oldest swords were handmade and used over three centuries ago but the Mughals, Safavid, and Changez armies.

An Afghan tulwar or Pushtun short sword, resembling the Roman gladuis, is weighted to properly balance the weapon.

Tawakal opened his shop during Operation Enduring Freedom, but today, sales have slowed. He says, “No one comes to Kabul anymore because of the explosions. I used to love it when people from all over the world came in here.”

Guns aren’t uncommon in Afghanistan, they’re simply a way of life. Often, talk is of war or war history, and what guns people want or need. “I have known guns all my life,” Tawakal says. “This is my life, my work.”