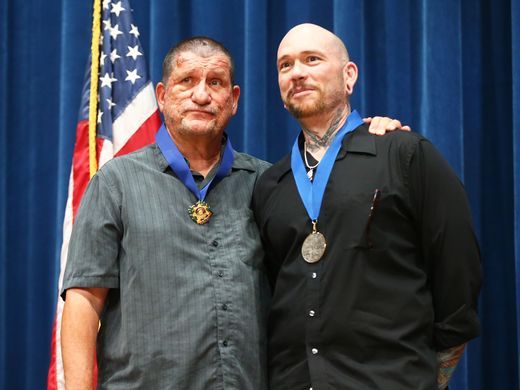 It happened at around 4am on January 12, 2017 off Interstate 10 near Tonopah, Arizona. DPS Trooper Ed Anderson came upon a rollover accident at mile marker 89, 40 miles west of Phoenix. The Trooper was placing flares around the accident scene when a gunman ambushed him, shooting him in the hand.

Anderson continued to struggle with the suspect, and that’s where Thomas Yoxall came to the rescue. 44-year-old Yoxall, a resident of El Mirage, Arizona, pulled his car over when he saw Anderson struggling with another man in the dark. The man drew his firearm and cautiously approached the scene.

Yoxall yelled at the assailant to step back; instead, the suspect raised both fists in the air. Yoxall seized his opportunity and fired three times. He said he had no doubt of his accuracy as he watched two shots hit the man.

The heavily tattooed Good Samaritan said, “You always hope that at that moment, that critical moment, you can be able to perform based on what your convictions are. You never know until that moment of truth.”

To Yoxall, the moment occurred in slow motion. He saw a woman’s body on the side of the highway; he also saw a loose gun, slide locked open, indicating it was empty. A man held the trooper to the ground, pummeling him with blows from fists. Yoxall called to the trooper asking if he needed assistance. Anderson replied, “Help me!”

When Yoxall saw an opportunity to safely fire, he shot three times in quick succession. The third shot struck the suspect in the head, killing him.

Yoxall was driven to a police station in nearby Buckeye, where he gave his statement to a detective. It was the first time he grew emotional about the incident. In fact, Yoxall was so upset as he described the trooper’s struggle on the side of the highway, that tears ran from his eyes.

After interviewing him, the detective told Yoxall he would face no charges in the incident. Other officers called him a hero. “I’m an ordinary person,” Yoxall said at a press conference. “I was put in extraordinary circumstances. I may have acted heroically. I don’t consider myself a hero.”

He also mentioned that carrying a firearm was a right, and he acted responsibly by training in the use of that firearm. “I have taken the time to make sure, several times a year, to go out and practice those safety techniques to make sure I’m always responsible.”

Yoxall’s story demonstrates that the idea of an armed citizen preventing a tragedy is not a fantastical theory. While he supports the second amendment rights of citizens to “keep and bear arms”, Yoxall also believes there should be some government regulations for those citizens. He suggests in addition to background checks, citizens should undergo some training in the proper use of firearms.

“I believe most educated common-sense gun owners feel the same way, too,” he said.

Trooper Anderson, who had just become a grandfather for the second time just two weeks before the incident, said he was grateful Yoxall drove by when he did. “For me, he was there that one day, those few seconds, those few minutes,” he said. He and Yoxall have become good friends since the shooting.

Beginners Guide to Buying Your First Gun – 5 Things to Consider