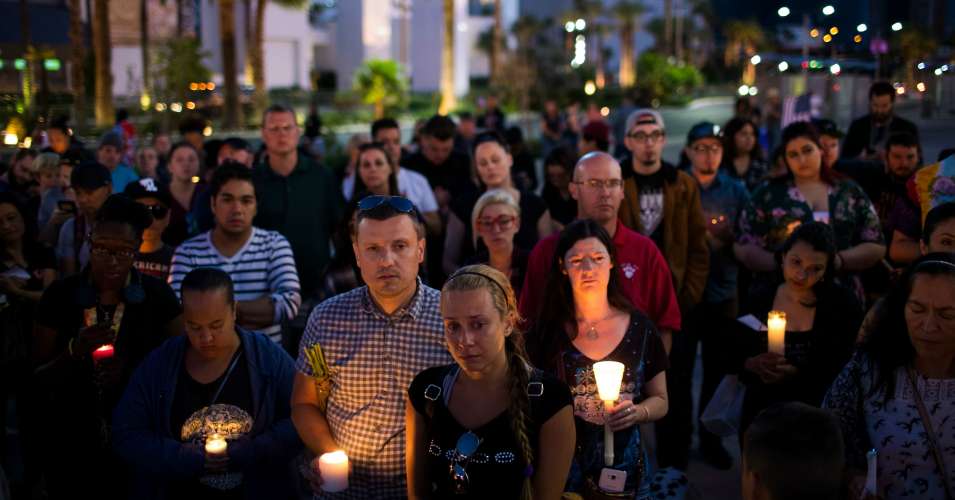 Much has yet to be revealed about the October 1st shooting in Las Vegas, NV, but as the death toll rises to 59, we here at Gun News Daily press our hats to our chests and bow our heads in prayer for the victims, their families, those injured and everyone else who scrambled in terror in the wake of what is being referred to as the deadliest mass shooting in modern US history.

Some are speculating that there may have been multiple shooters involved. Thus far, all that we know for sure is that 64-year old North Texas resident Stephen Paddock has been identified by law enforcement as being the lone gunman responsible for killing 59 and injuring 527 others.

Paddock allegedly shattered the windows of his 32nd floor suite at the Mandalay Bay Hotel & Casino and proceeded to fire into a massive crowd of 22,000 who were gathered at the Route 91 Harvest country music festival.

The Clark County Sheriff’s Office has reported that they recovered no less than 23 firearms from his two-room suite including an assault rifle with a mounted scope and a handgun.

The casualties have been devastating with a special ed teacher, an emergency room nurse who was in Vegas for a wedding anniversary, a 29-year old military veteran, a school superintendent and a police department records technician among those who perished in the attack.

Mothers, sons, husbands and wives were all felled by the assault which remains unmotivated at this time. What is perplexing people the most is Paddock’s supposed lack of experience with firearms. When interviewed, Paddock’s brother told reporters that he was not an “avid gun guy.”

Eric Paddock went on to say that his brother had “no affiliation, no religion, no politics.”

This didn’t stop a slew of misinformation about both the shooter and his victims from spreading like a disease online. The Israel National News briefly claimed that Paddock was a convert to Islam. The Islamic State militant group ISIS even took credit for the attack, writing, “Attacked of the #Las_Vegas shooting is a soldier of the Islamic State and carried out the operation in response to targeting coalition countries.”

This claim, and others like it, were ultimately debunked, but not before far-Right talk show host Alex Jones placed the blame on the antifa movement, suggesting that Paddock had antifa literature in his backpack at the time of the shootings.

Despite the high volume of fatalities and grave injuries, the attack was over and done with in 20 minutes thanks to concerted efforts by Las Vegas Police who did their absolute best to manage the chaos and quickly zero in on Paddock’s location.

It was a situation that could have gotten far more out of control what with Paddock utilizing a bump-stock to fire rapidly into the giant crowd fleeing in all directions.

While country music fans ducked down and ran low to the ground, one police officer sent out a call on his radio, saying that he was pinned down against a wall with 40 to 50 people. Another officer took cover behind a police vehicle.

SWAT teams were then deployed, relying on explosives to gain purchase to the gunman’s suite. By the time they’d achieved access to Paddock’s room, he had already taken his own life.

In the aftermath of this national tragedy, it will be easy for gun control advocates to go on the offensive, using the shooting as a means of justifying their efforts to trample on Americans’ Second Amendment freedom. But it is times like these when everyone needs to be able to protect themselves, particularly those law enforcement officials who shoulder the difficult task of protecting the public in a world gone mad.

In a high risk active shooter scenario, our police should have all of the tools at their disposal necessary to protect and prevent. This includes self-protection such as shooting glasses, head gear, shields and tactical weaponry.

Back in August, many members of the press criticized US President Donald J. Trump for his plan to lift the ban on giving local police surplus military gear. But in light of the recent onslaught of violence in our country, the Mandalay Bay shooting and the Charlottesville protest in particular, it seems only appropriate to properly outfit our boys and girls in blue with the gear to get the job done.

2 thoughts on “Country Mourns in the Wake of Vegas Massacre”