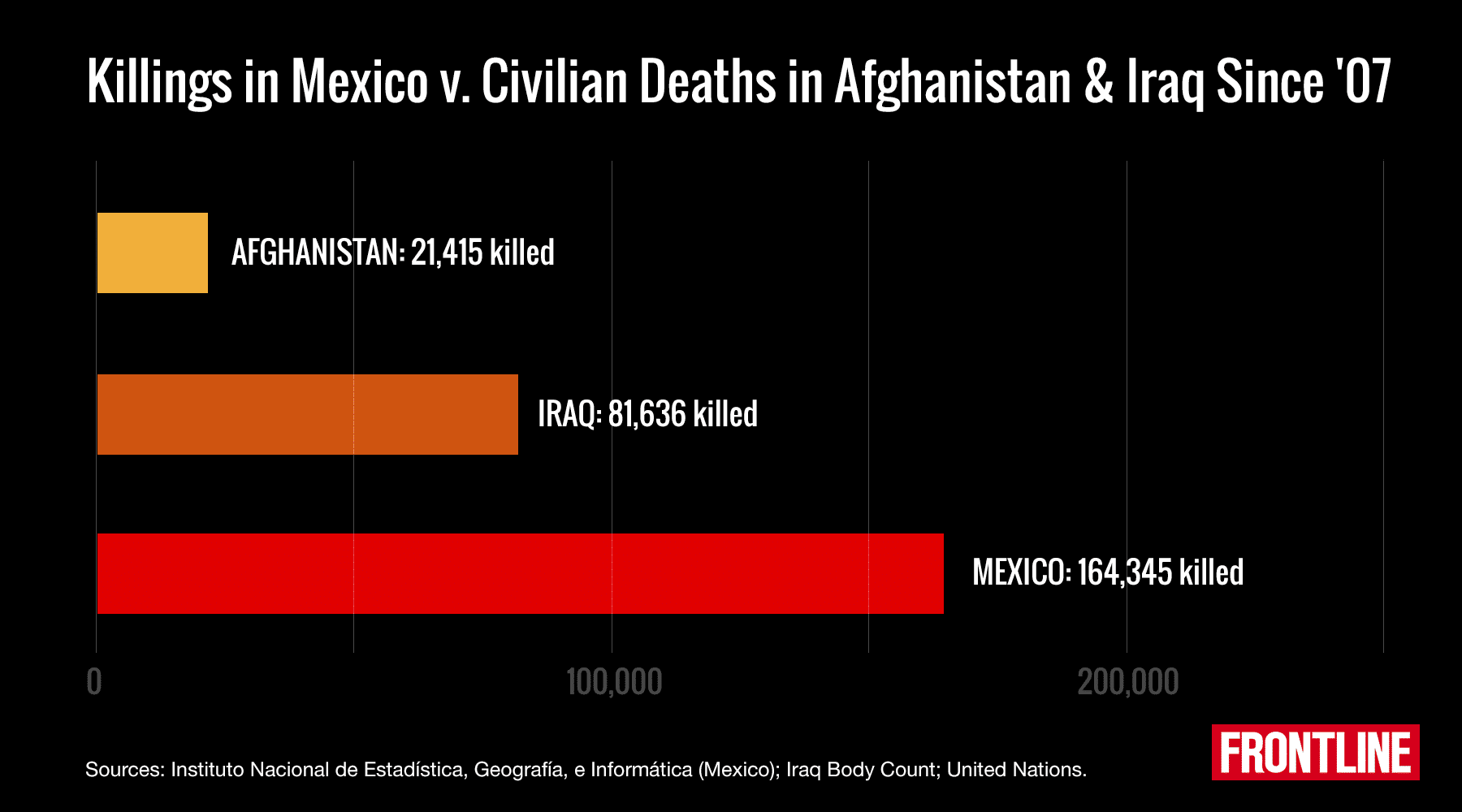 Mexico had the second-highest number of murders last year among countries considered in “armed conflict,” according to a report published on Tuesday.

With nearly 23,000 intentional homicides in 2016, Mexico’s murder tally was second only to war-torn Syria’s 60,000, said Antonio Sampaio, one of the authors of the International Institute for Strategic Studies’ “Armed Conflict Survey 2017.”

The report deals a blow to to President Enrique Peña Nieto’s efforts to end Mexico’s deadly drug war, which has dragged on for more than a decade.

Over the last 10 years, the military’s expanding law-enforcement duties have put it in closer contact with the public, especially in places like Ciudad Juarez, were military patrols have been a common sight on city streets. The military has also put its firepower on display in gun battles with suspected criminals, sometimes dueling it out in the middle of neighborhoods.

Although the 2016 homicide data has been around for a few months, the IISS report’s conclusion that Mexico’s murder tally was second only to Syria’s could end up being a massive setback for Peña Nieto, who is struggling with tense negotiations with US President Donald Trump, rising inflation, and low approval ratings.

Peña Nieto’s office did not immediately respond to a request for comment from Reuters.

While homicides are generally reported at a rate per 100,000 people, Sampaio said many countries in armed conflict lack reliable population data.

“We think absolute numbers are a good way of measuring intensity,” he said. “Plus 23,000 is a huge number; no doubt about that.”

The number of homicides in Mexico has risen considerably in recent years — though it has not affected the entire country and not all deaths are attributable to organized crime — and Latin America is home to many of the most violent cities in the world.

Other data suggests that countries in the region may rival Mexico’s tally, though they don’t appear on IISS’ ranking.

A Venezuelan NGO reported that country saw 28,479 “violent deaths,”though the government only classified 18,230 of them as homicides. Brazil recorded nearly 60,000 homicides in 2014, and violence there continues.

“It is very rare for criminal violence to reach a level akin to armed conflict. But this has happened in the Northern Triangle of Central America (Honduras, Guatemala and El Salvador) and, especially, Mexico,” IISS said in a statement. “In all four countries, armed forces have been deployed for many years specifically to fight criminal gangs and, in the case of Mexico, transnational drug-trafficking cartels, with military-grade weapons and vast financial resources.”

Since taking office in 2012, Pena Nieto has sought to cast Mexico’s as a modern economy, pushing through energy, telecommunications, and labor laws aimed at kick-starting growth.

Nonetheless, his administration has been scarred by stubbornly weak growth (which has been further stalled by violence), a perception of corruption, and confused tactics on how to end a decade of drug violence that has killed well over 100,000 people.

The 2016 murder tally rose to its highest level since Peña Nieto became president, and the first few months of 2017 have shown no signs that the violence has stopped.

In January, Reuters reported that Mexico’s declining security budget could help drive the 2017 murder tally to its highest level ever.

“If the government doesn’t have any money for security measures … it’s going to be terrible. (The number of murders) is probably going to get to the worst level it’s ever been,” Leo Silva, who led the Drug Enforcement Administration office in the northern Mexican city of Monterrey until 2015, told Reuters at the time.

“The inability of the Mexican economy to grow by significant rates … is a reason why the state is incapable of implementing a nationwide, significant security strategy to the same level that other Latin American countries have,” Sampaio said.

The Mexican government’s efforts to reduce the bloodshed have been hindered by ongoing clashes between the country’s cartels and criminal organizations. Deep-rooted corruption in state and local police forces has been exploited by criminal groups. In some places, the federal government has dissolved local security forces.

A split within the Sinaloa cartel, which was run by kingpin Joaquin “El Chapo” Guzman until his arrest last year and has long been considered the country’s most powerful cartel, and the continued ascent of fearsome newcomers the Jalisco New Generation cartel, also contributed to the rise, Sampaio said.