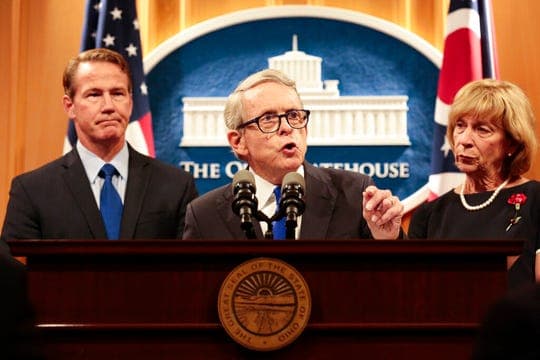 In early October, Republican Ohio Governor Mike DeWine formally announced his gun control plan to try and reduce gun violence in the state. Known as The STRONG Plan, the 17 Point legislation will require numerous changes in Ohio law in order to enact.

The proposals come after the Dayton shooting that occurred in Ohio on August 4th, in which ten people were killed (including the shooter) and another seventeen were wounded. At the time, Governor DeWine announced his support for expanded background checks and red flag laws, while opposing ‘high capacity magazine’ and ‘assault weapons’ bans. During a vigil for the victims, the crowd famously shouted “Do Something!” at Governor DeWine as he addressed the crowd.

The STRONG Plan, however, represents a significantly different version from the red flag laws and universal background checks that DeWine had proposed earlier. This came as somewhat of a relief to gun rights supporters, but attracted the ire of gun control advocates.

DeWine argued that while he was still personally supportive of background checks on private gun sales and red flag laws, he did not believe the proposals would pass the Ohio Legislature, which is dominated by the Republican Party. DeWine does, however, believe The STRONG Plan has very good odds of making it through the legislature before coming to his desk for a signature.

“This is something that we believe can pass, will pass, and will make a big difference,” said the Governor at the announcement of the proposals.

The term STRONG is actually an acronym for:

The STRONG Bill would create a new process in Ohio law, which would allow hospitals and courts a better ability to help those who are declared to be danger either themselves or to others. It will ensure that such individuals who are declared by a judge to be a danger to themselves or to others will not have access to firearms. It would give the family members of those who could be a danger to themselves the ability to more easily petition the courts for treatment.

Additional things The STRONG Bill would do includes:

The DeWine administration has argued that The STRONG Bill will help to reduce gun violence in the state of Ohio while still being acceptable to 2nd Amendment advocates.

Gun control advocates have argued that the bill does not do enough to stop gun violence in the state. Everytown For Gun Safety, the largest gun control group in the nation, stated that “The Safety Protection Order in this bill is not a red flag proposal or anything that even remotely resembles it.”

It remains yet to be determined as to whether The STRONG Bill will pass the Ohio Legislature in order to be signed by Governor DeWine and become law.