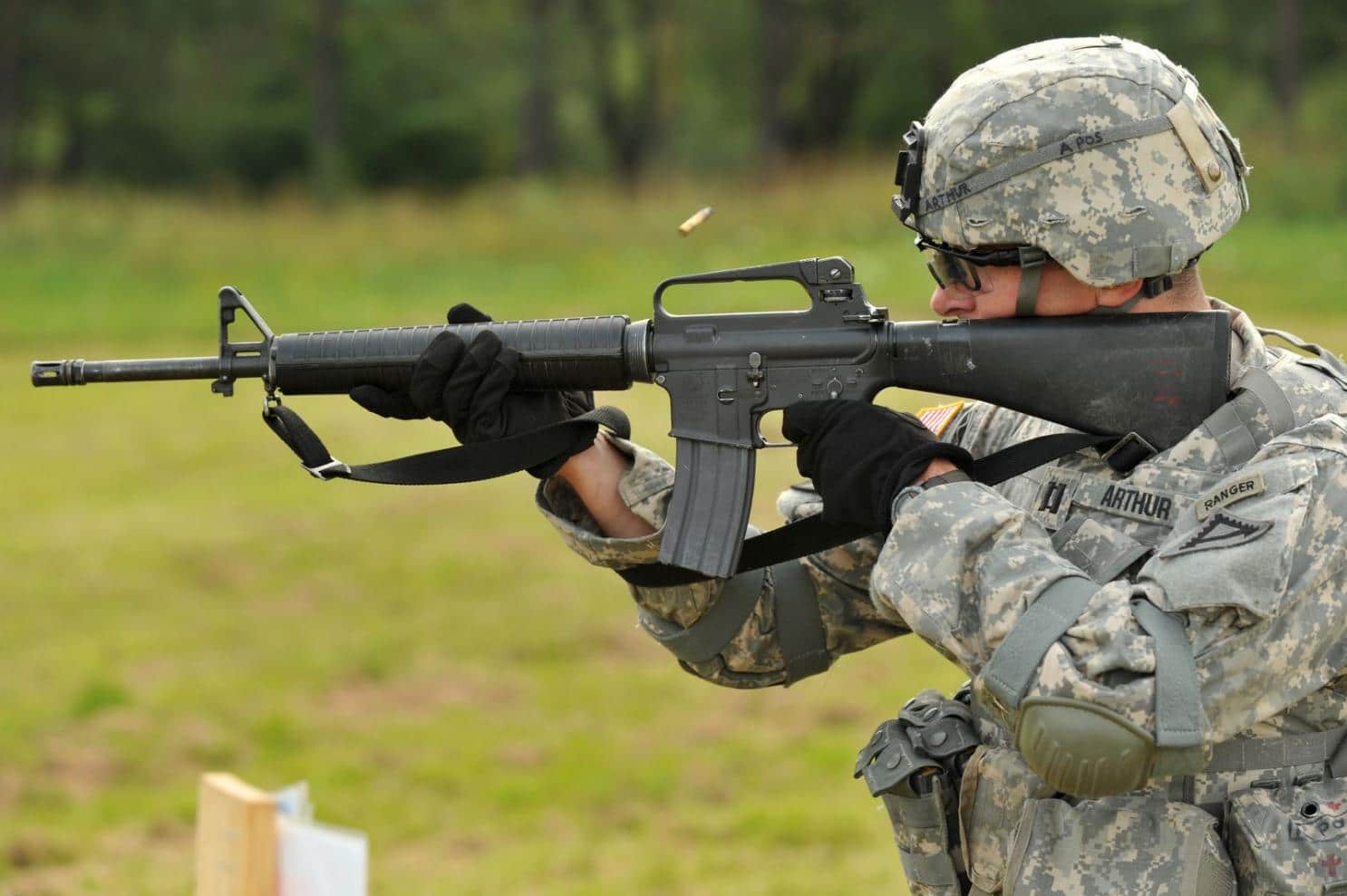 The M-16 Assault Rifle: The Gun Born in North Korea

The M16 rifle is one of the most iconic weapons of the post-World War II era. American fighting men have carried the M16 in one form or another into combat for more than fifty years, from Vietnam to the present day. The story of the original M16, whose descendants the M16A4 and M4 carbine today fight in Syria and Iraq against the Islamic State, goes all the way back to the 1950s and the institutional soul-searching that came after another war—Korea.

In the aftermath of the Korean War, the U.S. Army took stock of its small arms arsenal. The Army’s M1 carbine, M1 Garand rifle, Browning Automatic Rifle squad automatic weapon and machine guns were all some variation on .30 caliber. The Army needed a new rifle and carbine, ideally a single weapon, but the data suggested that the lighter, slower .30 caliber round of the M1 carbine was less useful than the .30 and .30-06 rounds used in other small arms.

At the same time, influential studies by Army ordnance engineers suggested that a soldier using a small caliber, high-velocity rifle of about .21 caliber would expect to kill 2.5 times more targets than with the M1 rifle. The average infantry engagement took place at 300 yards or less, and the average expert rifleman’s marksmanship declined sharply beyond 100 yards. Therefore the utility of a heavier round requiring heavier bullets and a heavier recoil—but capable of killing targets at 500 yards—was questionable.

If the studies were true, a smaller, lighter round fired from a lighter rifle was the future. Although smaller, such a bullet would be more practical at realistic engagement ranges. Soldiers would find a small caliber weapon, with its lighter recoil, easier to shoot prompting them to shoot more often. Soldiers could also carry more of the lighter cartridges than the big .30-06 rounds of the M1 Garand.

The reports also suggested that a weapon that fired a slightly dispersed pattern of bullets—or projectiles—could compensate for near-misses on the battlefield. An infantryman might miss an enemy soldier’s head by two inches, but if his weapon fired multiple projectiles that fell into a tight pattern around the aiming point, that infantryman might still hit his target. Hence, the armed services plowed considerable effort into exploring weapons that had multiple barrels, cartridges that held multiple bullets, and steel dart “flechettes” that could solve the dispersion problem, but after seven years the research bore no operational weapon. The simplest, most obvious way to achieve a slightly dispersed pattern was through burst fire from a small-caliber, high-velocity weapon.

Meanwhile, a new rifle design from the ArmaLite corporation was gaining a lot of attention. Developed by small arms designer Eugene Stoner, the AR-10 rifle was a lightweight rifle that fired the 7.62-millimeter NATO cartridge. The 7.62 cartridge (.308) was similar to but less powerful than the .308 Winchester hunting cartridge. The weapon featured a pistol grip, carrying handle, and loaded from a twenty-round magazine. The weapon used a novel gas operated, direct impingement design, in which gunpowder gasses were diverted via a tube to push the bolt carrier group, unlocking the bolt from the breech face and sending it rearward to eject the empty casing and chamber a fresh cartridge.

The AR-10 experienced considerable teething problems but the sleek, space-age design still had its backers. The AR-10 lost the competition for the next U.S. Army rifle to the T-44 rifle—later designated the M-14 battle rifle. Despite this, on May 1, 1957, ten days after the M-14 was chosen the U.S. Army ordered ten AR-15 rifles—virtually the same rifle but ported to the smaller .222 Remington round—for testing and evaluation.

The AR-15 design was purchased from Fairchild/Armalite in 1959 by legendary arms maker Colt. In the early 1960s, the AR-15 design was refined, the cartridge renamed .223 Remington, and the cocking lever relocated from the top of the rifle to behind the carry handle. Tests in Asia proved the lighter, smaller caliber weapon was popular with shorter-statured Asians, but buyers could not qualify for U.S. military aid funding because the U.S. military did not use the AR-15.

Recommended: What Will the Sixth-Generation Jet Fighter Look Like?

Recommended: Imagine a U.S. Air Force That Never Built the B-52 Bomber

In 1962, the U.S. Air Force purchased 8,500 AR-15s, but the rapidly escalating situation in Vietnam saw many of these rifles diverted to arm South Vietnamese Army, as well as U.S. Navy SEALs and U.S. Special Forces operating in Vietnam. The encouraging feedback from these units, fighting enemies armed with the AK-47 assault rifle at close range, led the Army to a “one-time” purchase of 104,000 rifles, renamed the M16 and M16E1, in November 1963. The obvious advantages of the M16 over the larger, heavier M14 in Vietnam, as well as the large number of U.S. troops deployed to Southeast Asia, led to further purchases and eventually the M16 overtook the M14 completely.

A comparison between the M14 and M16 is illustrative. The M14 rifle weighed 9.32 pounds unloaded to the AR-15/M-16’s 6.35 pounds. An M14 rifle with 120 rounds loaded in magazines weighed 18.93 pounds, while the M16 weighed just 11.04 pounds. The M16 was also nearly six inches shorter. Furthermore, thanks to its smaller cartridge, the M16 in automatic fire mode produced shot groups half the size of the bigger rifle.