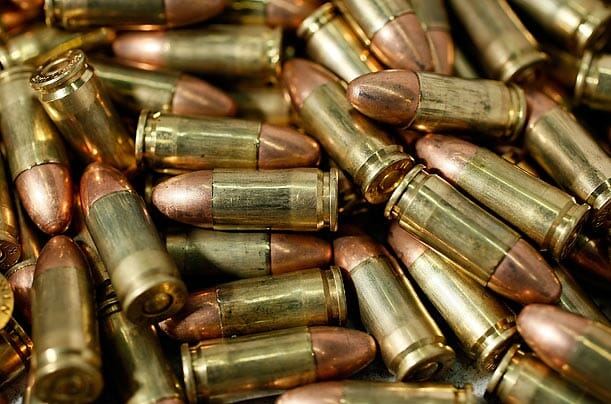 Most of us know about guns but few of us understand how bullets work.

The word bullet first originated from the middle French word known as “Boulle” which meant small ball. Early bullets were muzzle-loaded with a small cap and ball at the top and a huge paper cartridge.

Each type of ancient bullet had a specific function, such as target shooting, defense training, warfare and even hunting. A bullet is not actually a cartridge. Bullets are generally expressed by their specific weight and diameter.

Let’s clear up a couple of terms to make this a lot easier. 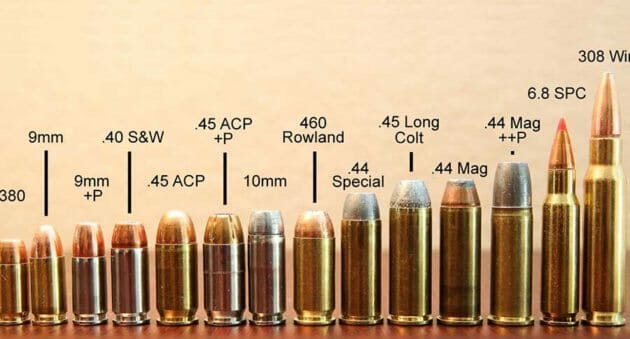 When we talk about caliber we’re actually referring to the diameter of the barrel. The bullet is just the metal projectile that is traveling through the barrel while the entire unit is known as the cartridge. Basically think of the bullet as the object that will be hitting your target. Everything else is just helping it get there.

We realize that ammunition can be a little bit intimidating for those who don’t know much about firearms.

Picking the correct ammunition is an extremely important decision that will affect the performance and also the safety of your weapon. It’s important to do research so you’re well-informed when you go hunting or head off to the range. 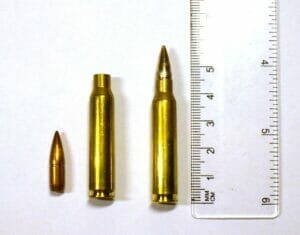 We all know that shotgun shells are measured in gauge. The lower the number the larger the diameter of the shotgun shell. So if I were to say a 12 gauge shell that would mean it’s 70 MM long or about 2 1/2 inches.

A bullet is not actually what you think it is. What most people think of a bullet is actually a cartridge. Take a look at this picture that shows how a cartridge works.

CARTRIDGES ARE COMPRISED OF FOUR COMPONENTS.

Bullets come in a lot of different flavors. Most bullet types are described using suffixed acronyms. Let’s take a look at a few types.

Now that we’ve taken some time to look at the physical characteristics of different bullets and cartridges, let’s take a quick peek at how designs affects performance.

First off, I’d like to say that this is an entire field of study that some engineers dedicate their whole career towards. So it’s a lot more complicated than you think.

The word ballistics refers to an ancient Greek word “Ballein” which describes the action of throwing. Bullets are fired they typically adhere to a specific trajectory that is moderated by a velocity. This trajectory follows a similar path that a thrown football would take.

Bullets don’t actually fly in a straight line, rather they’re lifted and then slowly begin to fall as they lose that Kinetic energy also known as velocity. 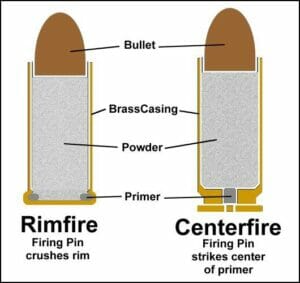 One of the important things to understand about ammunition and how it works involves something called rimfire and centerfire cartridges.

In a rimfire gun the weapon strikes the rim of the cartridge in order to ignite the primer. In a centerfire gun the firing pin hits the center primer.

If you can see a circular primer at the center of your casing than you have a centerfire gun. If it’s a smaller cartridge without any visible primer, there’s a good chance it’s rimfire.

Rimfire cartridges are generally a lot cheaper with some costing only a few cents. One of the most popular forms of rimfire ammo .22LR.

I mentioned before that bullets vary in measurement and sizes. There’s a commonly referred to unit called a grain which is used to describe the weight of a bullet.

The heavier the grain the more impact the bullet usually has. This is just simple physics.

When we talk about “stopping power” that usually means a higher weight density or or are specially designed to inflict greater damage (something like a magnum). In the section below we’re going to look at some of the most common types of ammo and how they differ. 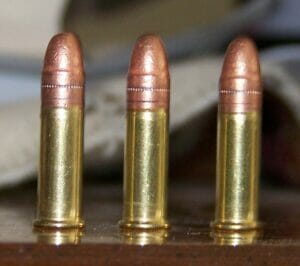 This is one of the most common calibers sold throughout the world. The average weight of this bullet is roughly 20–40 grains and can be shot in rifles and pistols.

Recoil isn’t an issue which makes it suitable for beginners or for those who still aren’t familiar with firearms.

Another reason why these bullets are usually used for beginners is the lower cost. Youth shooting programs almost always use. 22LR bullets as they are only a little bit more powerful than a pellet gun.

Military weapons don’t use this kind of ammunition and it doesn’t provide any sort of stopping power for self-defense situations. 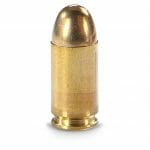 Now we’re definitely getting into the more powerful types of ammunition. There is relatively little recoil with this bullet and it creates very powerful penetration at close range.

Another common term for this bullet is the “nine“, which has become extremely popular for smaller pistols that can be carried via concealed holsters. It’s a little bit more expensive at roughly $.30 a round. 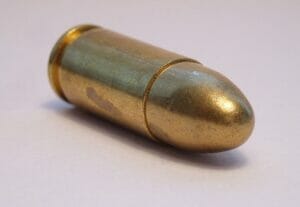 The 9MM was first known as the 9MM Luger which was a German weapon, but now most people refer to it by the common nickname “9mm” or nine mil.

For most shooters this is the go-to round, also used by military units (now switching to modular pistols) as well as law enforcement units throughout the world.

While it might seem difficult to believe the 9mm is actually the exact same size of bullet in a .380 as well as that .36. Naturally the difference behind these is the fire power in the cartridge. A typical 9MM round weighs anywhere between 116–149 grains which makes it pretty powerful for its size. 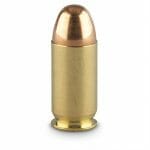 The .40 S&W is the stronger more powerful relative of the 9MM. This bullet was crafted for use by the FBI and gained quick popularity throughout the world afterwards.

Bullet weights are a little bit heavier ranging from 160 all the way up to 180 g. Luckily, S&W ammo is still quite cheap at about the same price as 9MM. 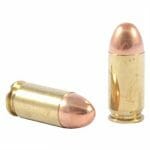 This bullet was created and designed by John Browning who was the inventor of the 1911 pistol. The 1911 pistol is one of the oldest and most reliable pistols made to date.

The .45 ACP is a big bad bullet with some serious power behind it. For those who want to pack a serious punch the .45 ACP is the go-to weapon for special force operators. It’s a little bit more expensive at roughly $.40 per round, but we think it’s well worth it. 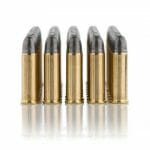 This is designed to be used in revolvers. The cartridge is slightly longer and contains more powder which makes it a heavier and slower bullet then its predecessor the 9MM. This is another round that is commonly used by the FBI and tactical teams.

The popular .357 magnum is the exact same round, however, the magnum is a bit longer. You can even fire a .38 special with a .357 magnum. However we advise you to not try doing this the other way around. 😉 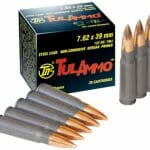 This is the Soviet round designed to be used in the AK-47. Recall isn’t too bad but it has some serious firepower.

Average weight of a bullet is roughly 123 grains, however, some manufacturers differ in their weights. Due to the amount of surplus ammunition on the global market AK ammo is actually very affordable. 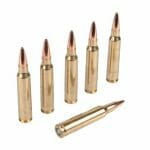 These two bullets have almost identical dimensions. The .223 is slightly lower pressure than the 5.56. This means that a .223 bullet can be used in 5.56 weapon. Bullets are roughly 55 grains and the cartridge is moderate recoil.

If you’ve ever shot an old school M16/AR–15/M4 then this was the kind of bullet you shot. Prices for these are roughly $.30 per round.

We’ve all heard of the infamous 12 gauge shotgun. Like I mentioned before the 12 gauge is actually pretty big with the 10 gauge being a little bit bigger.

A 20 gauge round is actually a little bit smaller in diameter.

Shotgun ammunition varies depending on what you’re planning on using it for.

Here are a couple different kinds of shotgun ammo:

Prices vary from $.25 a round all the way up to a dollar per round.

DIFFERENT BULLET CASING AND WHAT IT DOES

Next we’re going to talk about the different kinds of bullet cases to help you understand what each one is and what it does. 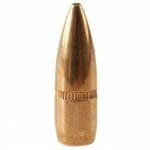 I think everybody’s heard of this kind of ammunition. The term full metal jacket was made popular from the movie Vietnam War classic “Full Metal Jacket“.

This is one of the most common types of bullets. The interior is composed of a soft metal core like lead which is surrounded by a denser metal like copper.

These rounds are usually pointy and even sometimes flat. FMJ rounds will typically go right through an assailant and make only a small entry wound and a large exit wound. These pack some serious power on the range and are fairly inexpensive. 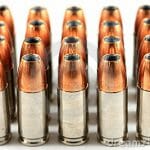 Hollowpoint rounds are nasty. They are designed to expand upon striking a target or object.

They pack some serious stopping power and are the go-to weapons for special forces, tactical units and concealed weapons. 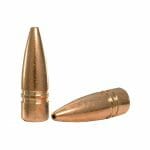 If you look at an OTM round you’ll notice they have an opening near the top that looks similar to a hollowpoint round. However, these openings are a little bit too small to expand upon impact.

OTM rounds are sometimes referred to as open tip match rounds since they are commonly used by a long distance shooters.

Some people believe that an OTM round is made in a more consistent manner than an FMJ round. 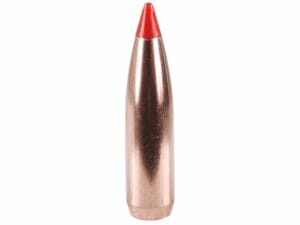 These are typically utilized by hunters. If you take a look at the bottom of the round you’ll notice that it’s slightly more streamlined. We talked about this earlier when we discussed tail boat rounds which function to prevent drag while the bullet moves through the air. 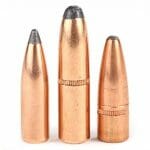 This is basically like an FMJ round however with the soft point part of the lead at the tip exposed.

The idea behind this is that the lead should flatten upon impact, however, in most situations we would suggest that you use a ballistic tip over a soft point.

A slug is just a big bullet, whereas, shot consists of a lot of tiny little

projectiles. Both kinds of cartridges involve the same kinds of components.

The majority of ammo cartridges contain only a single projectile. These are commonly referred to as a bullet or a slug.

When it comes to shotguns bullets are known as shot.

Within a shot cartridge are hundreds of smaller balls usually made of lead or metal which are spread over a wider area. One of the benefits of this kind of cartridge is it allows a moving target to be hit much more accurately than with a single shot.

Shotgun shells are generally composed of plastic with a backing made of brass that contains the primer.

That’s pretty much all we can think of. If you have any other info you’d like to recommend adding to this guide please drop it in a comment below.

8 thoughts on “Ultimate Guide to Bullets, Caliber and Cartridges 2022”