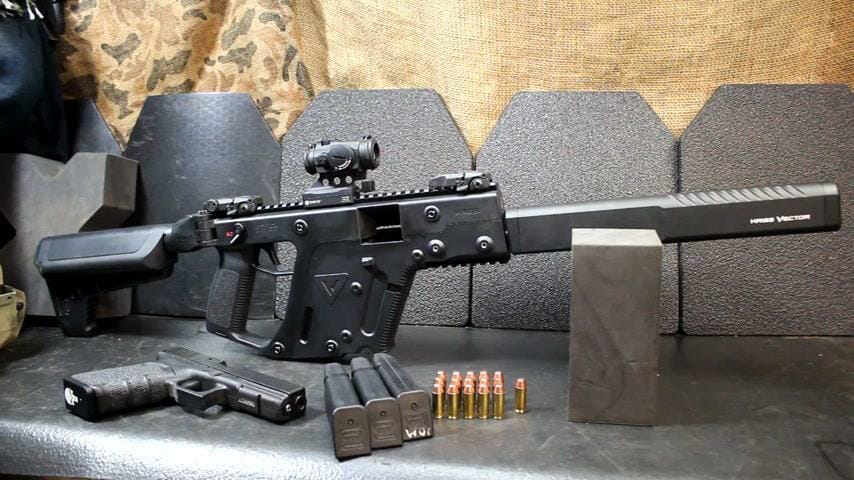 Submachine guns have their origins stemming and the Russo-Japanese War and World War I.

The Kriss Vector has discarded the notion that the smaller the pistol round the better, it successfully takes the generally difficult to manage .45 ACP pistol around and transforms it into a controllable submachine gun that doesn’t weigh in metric ton.

Today we’re to take a look at the Kriss Vector in both its positives and negatives and get a better understanding of how the weapon itself works.

What makes the Kriss Vector a modern solution to the once heavy to chamber .45 ACP cartridge is the marvel of modern recoil systems, the Kriss proprietary Super V recoil system.

In most weapons, the recoil from the weapon is directed backwards into the shooter’s body, which doesn’t sound bad at first but if you ever lugged a heavy weapon around and fired it all day, you know that ounces and controllability matter, especially in tactical situations where the Vector would most likely be used in. 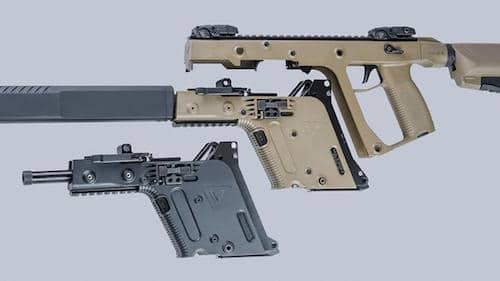 The design of the Super V recoil system is counteracting the natural impulse for the weapon to travel backwards into the shooter and instead directs the recoil of the gun downwards, reducing what’s known as walking when you fire a weapon at a high cyclic rate and it tends to move up into the left or up into the right.

The weapon itself is a closed bolt system and is positioned above the action instead of it typically being below.

This allows the bolt to move backward and drives the recoil spring downward into the buffer. The bolt activates the buffer which then channels the force of the impact downward with the mass of the buffer itself.

The system doesn’t come without its faults. The first shot groupings are tight but follow up shots tend to glance slightly up and to the right, but it still absorbs most of the recoil nonetheless.

Some would say the glancing shots are a direct result of the upward force of the mechanism resetting but tests show the second shots tend to be higher than the initial one.

The gun itself is a bit boxy and awkward while you first get use to it. 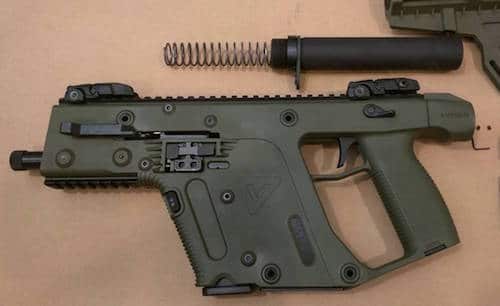 The selector switch is where things start to get a little weird, it’s isn’t located near the trigger guard or safety as it is on most submachine gun configurations, instead it is located at the front of the weapon near the recoil system and magazine port.

This is fine if you’re just going to be firing off some rounds at the range but may be a disadvantage and may leave you fumbling around in the dark if you’re using the weapon in a tactical situation.

If you are using a Vector in a low light situation or under circumstances which require you to change the mode of fire, choose one mode of fire and stick to it and you’ll thank yourself later.

The stock is more comfortable than it looks awkward, though it isn’t adjustable out of the box, it is comfort to keep shouldered thanks to the recoil system, you don’t absorb much recoil and it’s also foldable, so you can covertly stow it away if need be.

The magazine well is also located in a bit of an awkward spot. It too is oriented on the left side of the weapon so southpaws may have a little trouble with tactical reloads since you have to engage the release with your trigger hand. 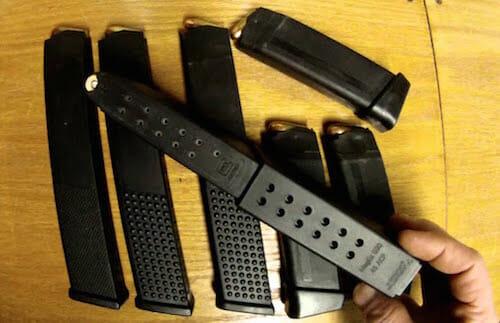 But on the plus side, the engineers at Kriss were thinking and designed the Vector to take Glock 21 magazines chambered in .45 ACP. It’s always nice when a firearm manufacturer takes into account what accessories firearms owners will already have in mass circulation and designed their weapons platform to accept it.

Think about it, if you carry a Vector as a primary weapon and your Glock 21 as a secondary weapon, you only have to carry one type of ammunition as opposed to several if you run two separate weapons platforms.

The recoil isn’t too bad to manage, it just feels a little unnatural at first. It’s definitely not your traditional kickback into your shoulder.

In terms of accessories, there is a picatinny rail system you can affix a wide variety of attachments to should you so choose.

The Kriss Vector is a very interesting take on the submachine gun. The Super V recoil system makes the .45 ACP much more controllable without all the added weight. All in all, it’s a great gun for a wide variety of uses and everyone should fire one at least once