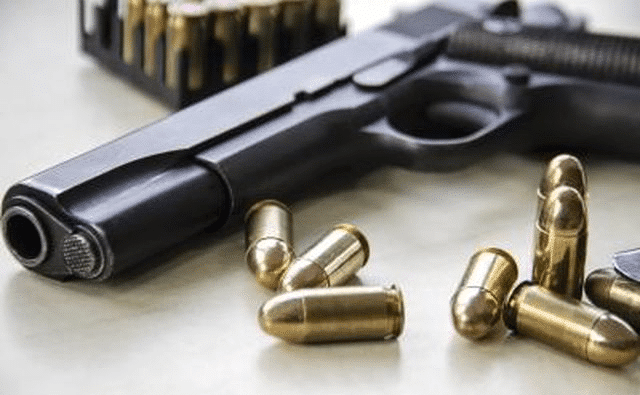 So, somebody’s got a brand-new .45 caliber handgun! I bet you’re eager to give this monster a try, and that means you need ammunition.

Remember this quote, “The 9mm kills the body, but the .45 kills the soul.”

There’s no question this fat round can do some damage. And now you’re probably wondering what the best 45 ACP ammo is for self-defense and/or target use.

Of course, the same round won’t fit the bill for both uses, especially because of the cost of self-defense rounds; you won’t want to use these for target practice.

And for self-defense rounds, you’ll want to get the biggest ‘bang’ for your buck, if you pardon the pun; target rounds just won’t fit the bill and don’t have the stopping power of hollow points.

But, keep in mind that you should always test any defensive rounds you choose to carry before relying on them. This will ensure that your weapon can handle the ammunition reliably.

So, we’ll break down the best bullets for both target and self-defense shooting.

How exactly does one get data on how ammunition performs?

By shooting it, of course. The folks over at Lucky Gunner have an excellent testing protocol for ammunition. Their procedure closely mimics what the guys at the FBI use and gives us plenty of useful data about the tested ammunition.

We’ll talk about this data in reference to specific ammunition later.

But the procedure used to collect ballistics data is important. Here are the criteria used:

The data gathered from ammunitions testing is called ballistics.

These numbers, usually an average taken from a number of shots, tell you things like how fast the bullet exits the muzzle, how much penetration you can get from a round, and other data like the rate of descent over specified distances.

Ballistics information can give you a way to compare not only calibers but different grains, or weights, of bullets in the same caliber.

You can learn more ballistics information by caliber if you visit Handgun Ballistics. This chart gives you an excellent and simple comparison in caliber as well as in different grains (weights) in the same caliber.

When you think about self-defense ammo, you want ‘stopping power’. A bullet’s effectiveness relates to how it’s constructed.

Lead is a soft metal, therefore bullets made solely of lead aren’t the best choice for self-defense. But, these are perfect for target shooting.

Because they add expansion and stopping power, hollow points are ideal for personal defense. But, because of their price, you won’t want to use them regularly for target shooting.

.45 caliber ammunition is available in different grains (gr). This is a unit of measure of mass and is used to describe the weight of bullets and their gunpowder.

The lower grain ammunition is generally reserved for target shooting, while bullets with a heavy grain are excellent for self-defense use. Nonetheless, you should test out whatever bullet grain you choose to carry defensively so you’ll know how your pistol will handle it.

Full metal jacket bullets (FMJ) have a soft lead core surrounded by a copper jacket. A full metal jacket will penetrate well, but there’s no expansion with these types of rounds.

Because of this, they’re often used only for target rounds. In a self-defense situations, there’s a possibility they might over-penetrate and end up injuring an innocent bystander.

Jacketed hollow points (JHP), on the other hand, do offer expansion, so they’re the go-to for self-defense ammo.

The lead core of a JHP will expand upon impact, creating a larger damage path through the target.

And because they’re still jacketed in copper, which slows them down, there’s very little chance of over-penetration.

In recent months, some manufacturers are using one of two bonding processes to secure the jacket to the core, preventing the premature separation of the two.

The mechanical bonding process uses a physical knurl or cannelure, like a lip, to prevent separation. An electrochemical bond molecularly welds the core to the outer jacket.

For self-defense rounds, this kind of bonded ammo is growing in popularity. To learn more about the bonding process, and how bonded ammo differs from non-bonded ammo, check out this guide. Though they’re discussing rifle rounds, the process for handgun ammunition is the same.

Note: if you’re using any 1911-style pistol, remember that they can be a bit hinky about ammunition. Some only like a full metal jacket round, so you should always test the brand you choose to make sure they will feed properly.

No matter what firearm you’re using, it’s a good idea to test your self-defense ammo; I had a Taurus 1911 9mm years ago that would not feed Federal expandable full metal jackets because they were just a hair too long.

I mean, it flat-out refused to feed properly and regularly jammed. That’s not to say the ammo or pistol were bad, they just didn’t match well.

Now that you know more about the basic differences between full metal jacket and hollow point ammunition, you want to learn more specifics.

So, let’s get down to the top .45 ammunition brands. First, we’ll discuss the most common self-defense ammo.

Again, please remember to test your self-defense rounds before relying on them in your gun! 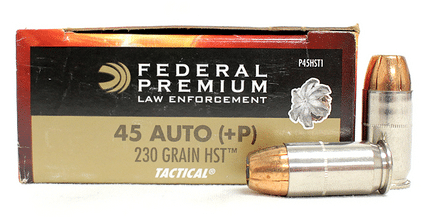 230gr HST rounds are an excellent choice for self-defense ammo. The hollow points expand reliably for the desired penetration. They also come with a nickel-plated case and Federal’s own primer. This ammo is unlikely to over-penetrate even in a firearm with a longer barrel. 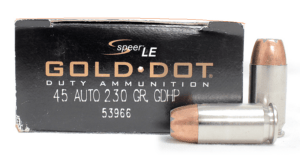 Speer Gold Dot ammunition is popular with law enforcement agencies around the country. The hollow point cavity is formed with Gold Dot’s patented two stage process. The core is then loaded into a nickel-plated brass casing. 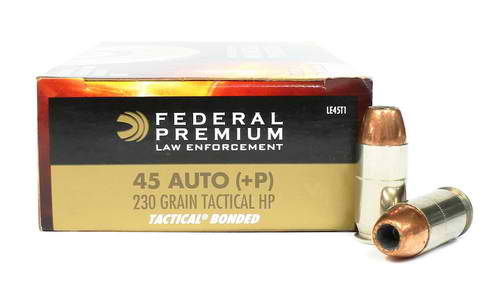 Lucky Gunner carriers the Federal 230gr Tactical Bonded rounds; however, it’s quite popular and thus often out of stock.

I’m unable to find a listing on Federal’s website for this round, either. These JHP bullets are Boxer-primed with nickel-plated brass casings.

These jacketed hollow points come in regular and +P for that extra power. They offer a stronger and wider six-petal expansion and the reliability of the Winchester name.

These are the full metal jackets intended for target use; they’re generally cheaper and more readily available. You won’t want to use them when carrying for defense purposes. They may over-penetrate, potentially injuring an innocent bystander.

These brands are widely available and so we list them as “assorted” since they have many different yet similar makes within each brand. 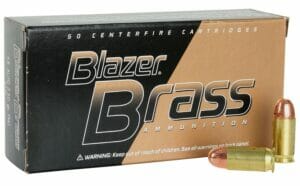 These are often the cheapest rounds, but are usually reliable. Blazer brass are made in reloadable brass, if you or someone you know likes to reload. They also use CCI primers for reliable ignition. 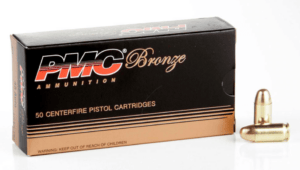 PM Assorted 230gr FMJ rounds are also made in reloadable jackets are sometimes cheaper in price than Blazers.

After reading this article, you should have an excellent knowledge of some common .45 ammunition for both self-defense and target practice.

Full metal jacket rounds are relatively inexpensive and are more suited for target shooting while jacketed hollow points are designed for defensive shooting and carry a higher price.

The type of ammunition you choose will vary depending on your intentions. You can also choose from various bullet weights; keep in mind heavier weights will likely result in more recoil when fired.

Do your research when purchasing bullets and always remember to test defensive rounds to ensure they will fire well from your pistol when needed.