The .22 round is now 159 years old, and shows no sign of becoming any less popular with age.

Shooters have been relying on it for over a century, and it is now older than many of the weapons we have handled, let alone owned.

There are many reasons to own a few good .22 caliber weapons. Preppers swear by them, if only because .22 rounds are available everywhere, can be stored and carried easily, and cost next to nothing.

If you are preparing for the apocalypse, you probably already have a few .22s around, but some of the rest of us haven’t shot one since we were children.

While .22s remain amazing weapons to take down squirrels and other small game, they have many other uses.

While not often chosen as self-defense weapons, for some people their light weight and lack of recoil makes them ideal for this purpose.

Add to this the fact that .22s are normally much cheaper than larger, centerfire rifles and pistols, and getting a decent .22 starts to look like an attractive proposition.

I know what you’re thinking – whilst .22 rifles are great while out hunting small critters, a .22 pistol is simply too underpowered to make sense.

This is true, in some ways. I wouldn’t recommend a .22 pistol to someone looking for some serious firepower. The small, light round doesn’t cause that much damage, and in some pistols can be unreliable. However, there are a few reasons why .22 pistols are a useful part of your armory.

It all depends what you are looking to use your pistol for. If you are a serious hunter, or are into prepping, I probably don’t need to tell you why this is. When hunting small game, or to defend yourself against wild animals, a .22 pistol has more than enough power.

And whilst a .22 will not stop an attacker dead in their tracks, it will certainly slow them down. In the right hands, a .22 LR cartridge can do some serious damage.

With that in mind, let’s take a look at our six favorite .22 pistols for various purposes.

For most purposes, we think that the Ruger SR22 is the best .22 pistol out there. You’re going to see  Rugers appearing quite a lot in this list, and with good reason.

The SR22 has been around for donkey’s years now, and is a good example of why the old designs are the best. Instead of trying to re-invent the .22 pistol every year, Ruger stick with the design that is tried and tested in the field. 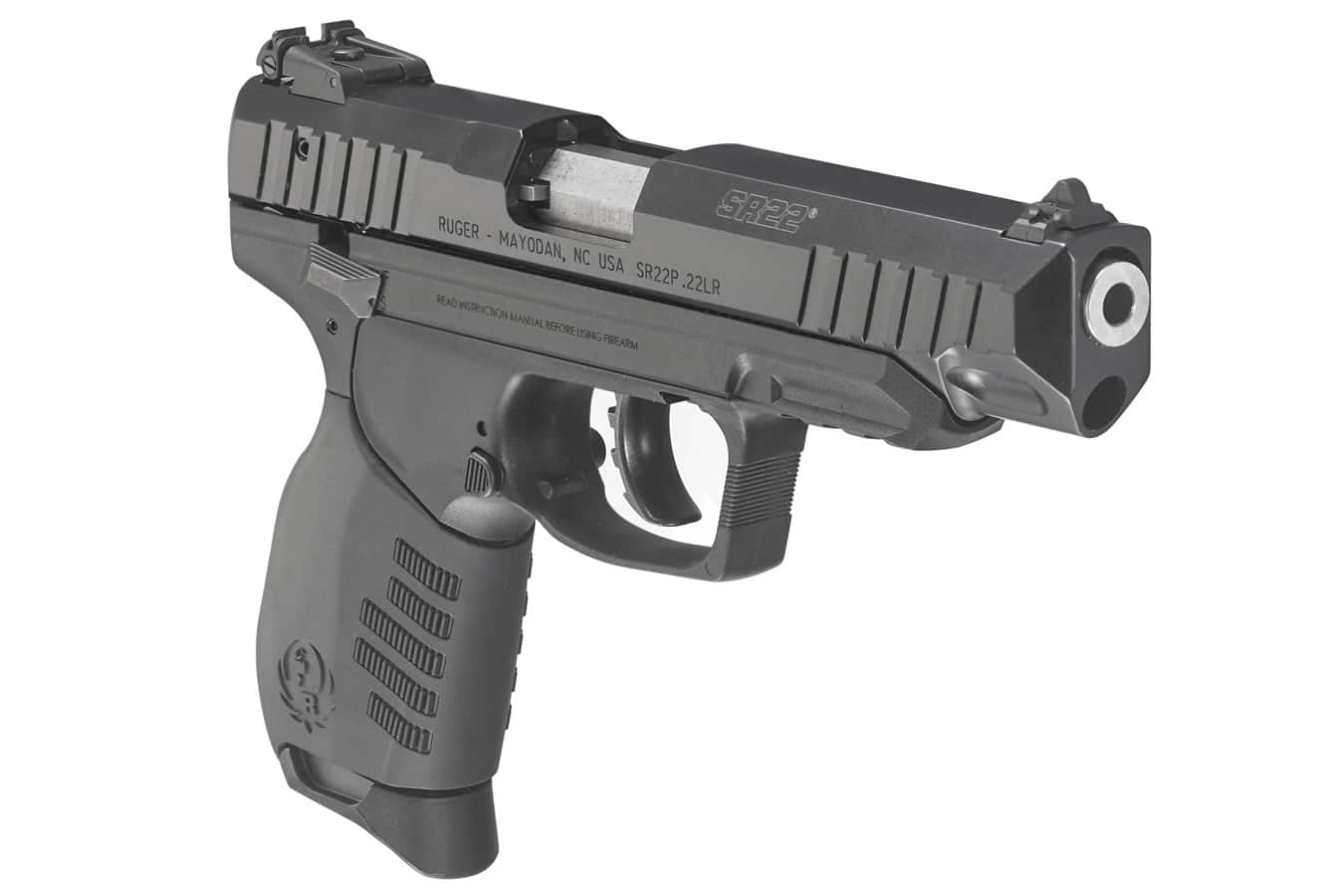 Ruger initially became famous for their 10/22 rifles, and they’ve carried over the rugged design of those to this handguns. They’ve removed all of the annoying design features that characterize too many modern .22 pistols, and stuck with what works.

We’ve tested a lot of .22 pistols over the years, and this is arguably the best. Let’s take a look at some of the features that make it stand out as a great .22 pistol.

On the other hand, there are some drawbacks of the SR22 that might mean it is not suitable for everyone:

Overall, this is our best overall pick for today because of the no-nonsense design, and the reliability offered by this classic pistol.

If you are looking to get a .22 pistol for self-defense, plinking, or for a survival situation, you could do much worse than giving this one a look.

Best .22 For Self Defense

A lot of serious enthusiasts will tell you that the .22 cartridge is useless as a self-defense round. It is true, undoubtedly, that getting hit by a .22 round is unlikely to kill anyone.

However, unlike hunters, in a self-defense situation you don’t necessarily need to kill your attacker, but merely stop them.

Getting hit with a .22 hurts enough to stop even the most determined assailant, trust me. The other factor to consider when choosing a self-defense handgun is the fear factor.

Nobody wants to get shot, and in a heated situation no-one is going to notice the caliber of your gun. 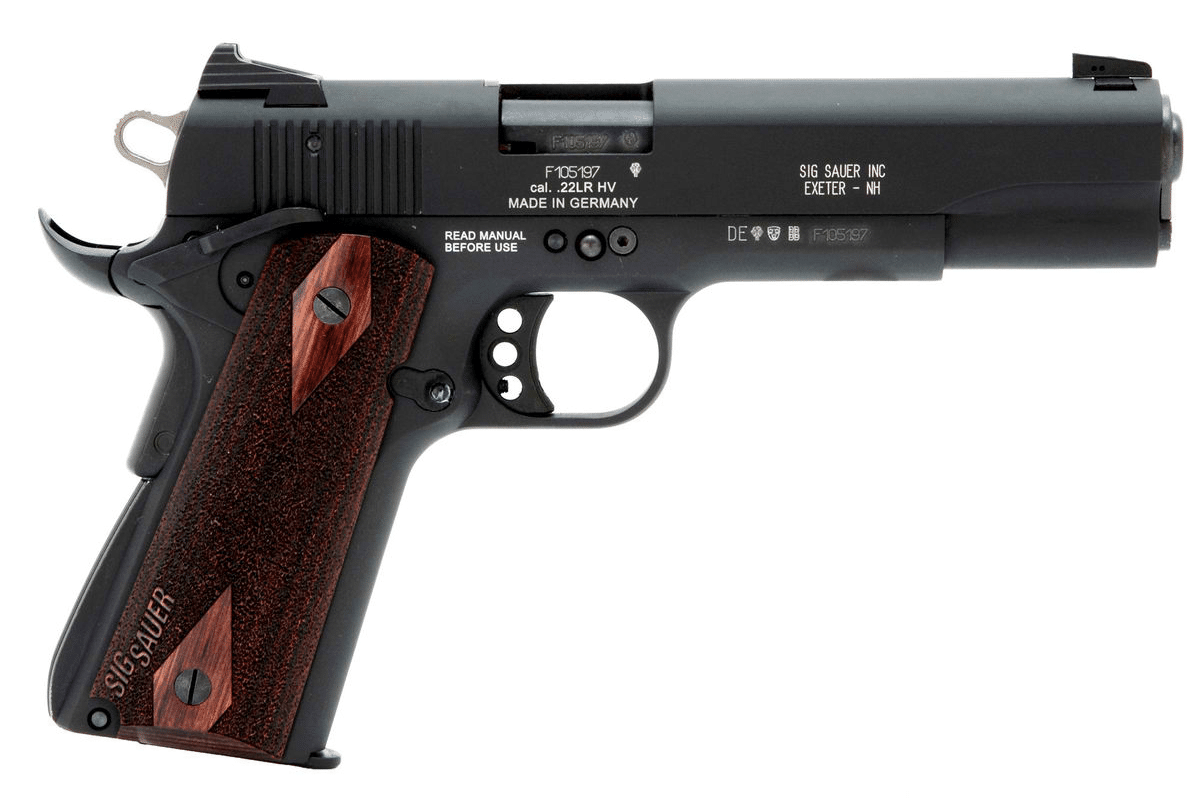 For this reason, our choice for the best .22 pistol for self-defense is the Sig Sauer 1911-22. This is a .22 pistol based on the 1911 design. I know that this is going to annoy the traditionalists, but hear me out.

The fact that this pistol follows the 1911 design means it points very well, and is therefore very accurate.

In addition, in a dangerous situation, you are pulling an impressive-looking gun from your holster. Nobody is going to know this isn’t a full-sized 1911.

In addition, this is simply a great .22 pistol, for a variety of reasons:

That said, there are some negative features of this pistol:

Overall, the Sig Sauer 1911-22 is our choice for the best .22 pistol for self defense because it looks and feels like a much more powerful gun than it is, and the classic design means that you are more likely to hit something in the heat of the moment.

In the end, a .22 LR round is much less powerful than a .45, and if planning on using the smaller round for self defense you have to make up for this somehow.

One of the reasons why .22 pistols have become so popular over recent years is their price.

For casual shooters who just want to have a bit of fun with a pistol, for training purposes, or even for getting your kids into shooting from an early age, getting a cheap .22 handgun is a good way forward.

Our choice for the best value .22 pistol is the Sig Mosquito. This is a brand new design, and has several features that make it great value.

It’s based on the famous P series of Sig pistols, but is a bit smaller. 7/8ths smaller, in fact. This makes it a little more lightweight than its larger cousins, and also helps to keep the price down. 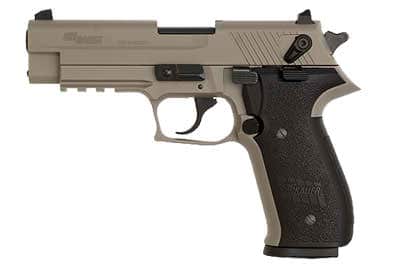 This does not mean, however, that you are getting a badly designed gun. This pistol, despite its diminutive size, still includes many of the features of more expensive pistols:

All this said, there are a few factors that mean that the Sig Mosquito is not suitable for absolutely everybody:

Overall, however, the Sig Mosquito offers amazing value. If you are looking for a .22 pistol that gives you all the features you would expect in a premium item, while not breaking the bank, this is the one to go for.

.22 Pistol With the Best Magazine

A very common problem with .22 pistols is that the flared rounds tend to jam pretty easily. For this reason, for many years we have recommended getting a .22 revolver pistol.

A revolver keeps the rounds separated better, and reduces the possibility of the gun jamming. This was good as far as it went, but down the range it is a little annoying to shoot a revolver – sometimes you just need more ammunition than it can carry. 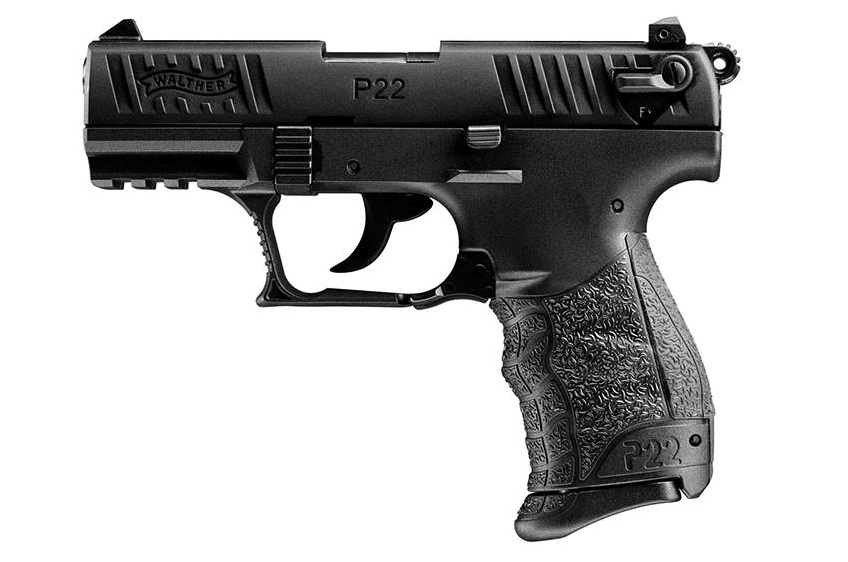 Luckily, recent advances in manufacturing now mean it is possible to make magazine-fed .22 pistols that are really reliable, no matter what ammunition you chuck at them.

This is the case, for instance, with the Walther P22. In all of our tests, whether using powerful premium ammunition or junk cartridges, it ate them all.

Being designed from scratch as a .22 pistol, and not as a scaled-down version of a full-sized gun, this pistol also works very well in most other respects:

In terms of disadvantages, this pistol has one drawback:

Apart from that, however, if you are looking for a .22 pistol with a hugely reliable magazine, the Walther P22 is the one to go for.

If you are fed up of your .22 pistol jamming every time you go down the range, it is probably time to get a new one, and this Walther is one of the best.

If you’ve recently had a kid and want to re-live those childhood memories of shooting at cans in the back yard, a .22 pistol is by far the best weapon to buy.

However, what you are looking for in a plinking gun is slightly different from the high-performance handguns I have reviewed above.

There is no need, with a .22 pistol for plinking, for quick reloading speeds. Taking it slow is what plinking is all about, after all.

Equally, it’s not necessary that your plinking gun is a super-lightweight firearm that you can carry concealed all day. This gun is going to stay locked up at home for most of the time, save for occasional trips out to the backyard.

Our recommendation for the best .22 pistol for plinking is therefore to get a revolver, and specifically the S&W Model 17. This gun was originally designed back in 1931, and has been used by several generations for plinking, making it perhaps the original gun for this purpose. 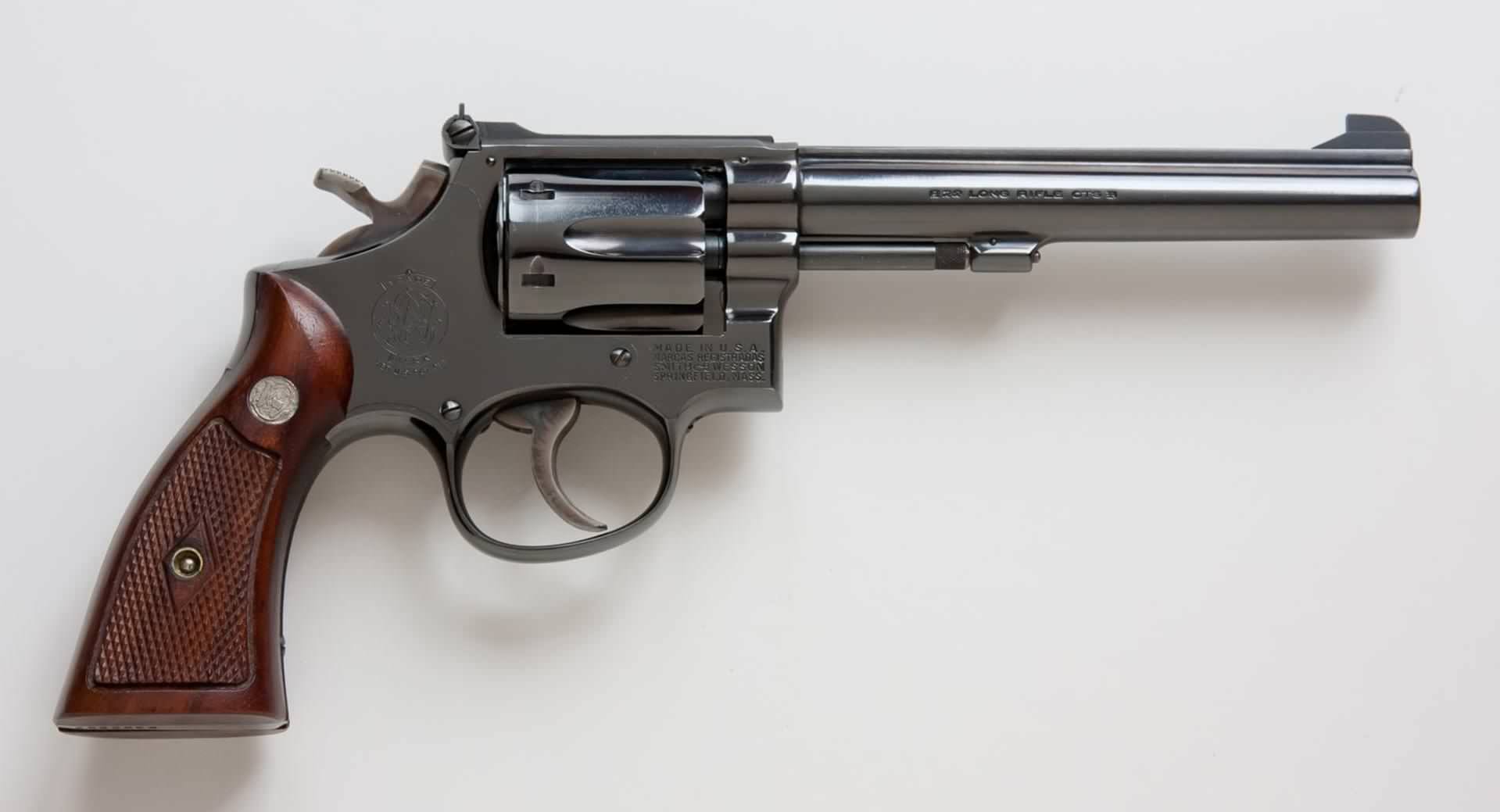 In addition, it has several big advantages as a .22 pistol for plinking:

That said, there is one drawback to this gun:

Overall, though, I think this revolver is the best for plinking. The fact that it is a revolver means that it will never jam, and the classic design and feel give an extra element to messing around in the backyard.

If you are looking for a weapon you can keep in the shed, and just take out to fire off a few rounds occasionally, this is the one for you.

Last, but of course not least, we come to the best .22 pistol for target shooting.

\What we are looking for here is accuracy, of course, but bear in mind that accuracy is about a lot more than just machining tolerances.

In order to hit a target reliably, you need to be completely comfortable with a gun, and that means that it needs to have an ergonomic design.

Our recommendation in this category will come as no surprise to .22 competition shooters – the Browning Buckmark.

You’ll notice that this pistol is a little different from the others we have chosen, being a sports pistol rather than a classic design, but for target shooting you really need something that is specifically designed for the task. 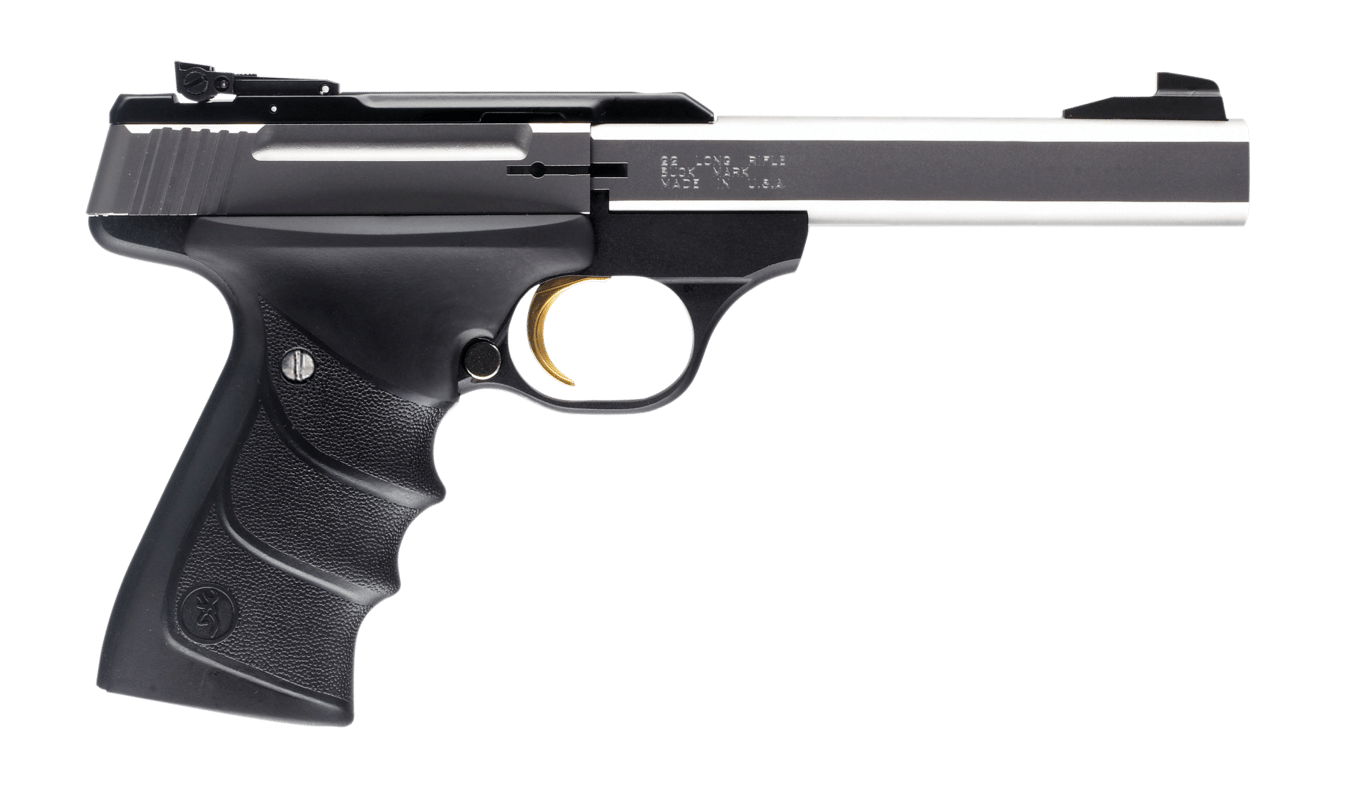 This pistol is great for the following reasons:

The only disadvantage of the Buckmark is perhaps the fact that:

Overall, however, if you are looking for a .22 pistol for target shooting, and one that will ensure pin-point accuracy, this Browning is the one to go for.

So there you go. Six .22 pistols, all great, and even better for specific circumstances.

If you still don’t own a .22 pistol, now is the time to reconsider adding one to your armory. Whilst not offering the power of larger caliber pistols, they can be reliable, long-lasting, and most importantly great fun.

So think about your priorities, have at look at our reviews above, and make sure you get the perfect .22 pistol for your purposes.

Will Ellis
Hi there, I'm Will and I'll be your guide. Here at Gun News Daily, we support guns for self defense and and competitive shooting. We believe that America should be free and support the 2nd Amendment.

About Us | Write For Us | Advertise