The Glock 22 and Glock 23 are two of the most popular “plastic” handguns on the market. Both are very reliable handguns as both are manufactured by Glock, a company known for their products’ legendary reliability. Both are also chambered for the .40 S&W, a handgun caliber developed specifically for law enforcement and self defense.

But These Are Both Glocks…

So if both the Glock 22 and Glock 23 were designed by the same company and both are chambered for the exact same handgun caliber, they’re practically the same. You’re probably asking, what’s the point of comparing them anyway?

Well, by the end of this showdown, we hope to be able to enlighten you on some key points.

THE TALE OF THE TAPE 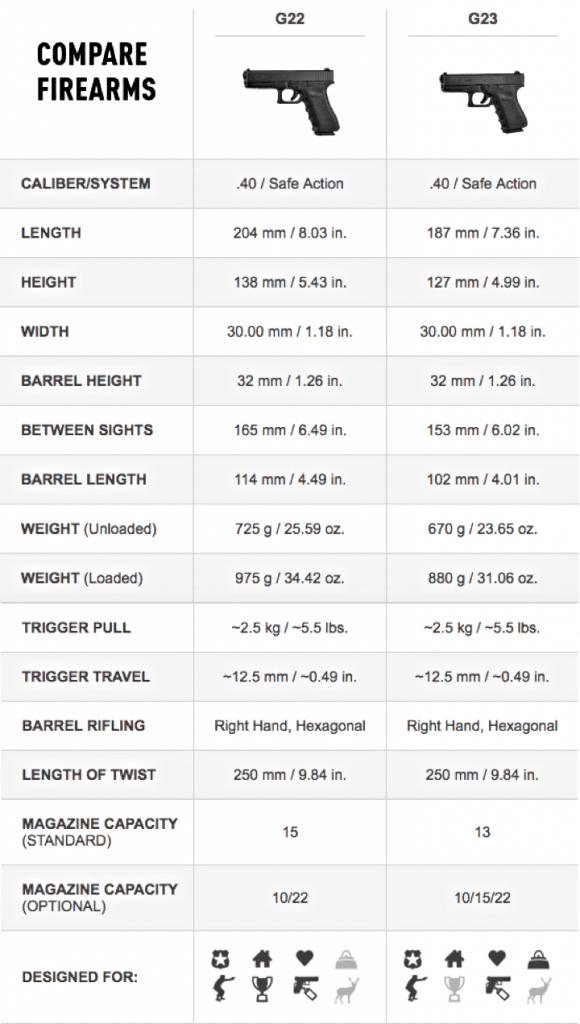 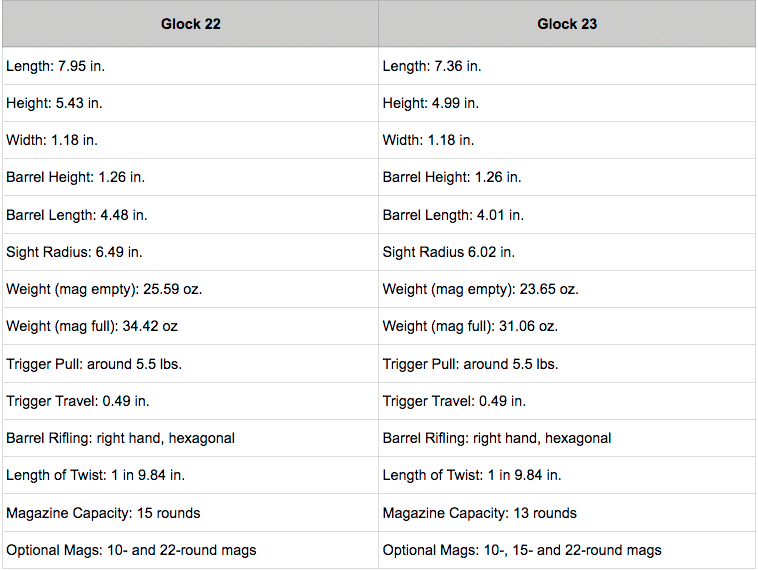 So again, why compare them?

Depending on several factors, either of these two polymer burners could be the perfect fit or could cause a very bad case of buyer’s remorse.

BIGGER IS BETTER… OR IS IT? 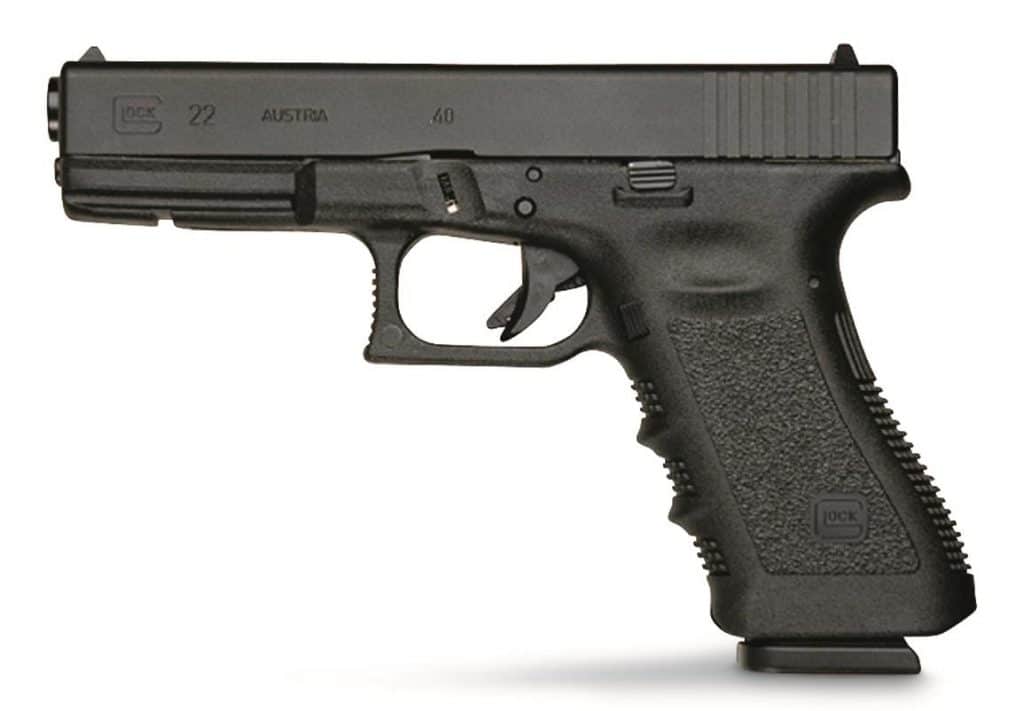 The way you hold any gun greatly affects your accuracy and how quickly you can do follow-up shots.

If you’re a tall person or if you have ginormous hands like The Hulk’s and you can barely wrap two fingers around a typical compact handgun’s grip, then the Glock 22 should be the better pick. It’s taller than the Glock 23, which means it has a longer grip. There should be more room for those fat fingers to firmly clutch at. 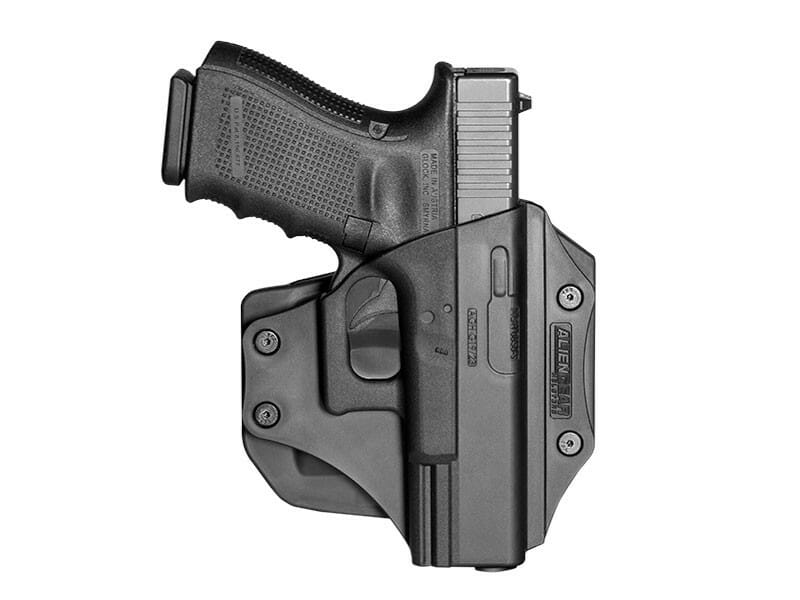 Keep in mind though, bigger handguns are much more difficult to conceal. This shouldn’t be an issue in states that allow open carry, but even in these states conceal carrying can be practical, even essential — sometimes the element of surprise just wins a gunfight.

If you’re looking to conceal carry, the Glock 23 will be easier to conceal because of its relatively shorter grip that won’t print as bad as the Glock 22’s — unless you want to wear sweaters or jackets and big baggy pants all year.

If you need info on some of the best CCW (concealed carry weapon) holsters on the market for both of these Glocks or for other pistols, check out this exhaustive list of holsters we created.

If you’re the type who puts a lot of time in the range, accuracy shouldn’t be an issue with both the Glock 22 and Glock 23 as they both have the same barrel rifling and the same length of twist.

Either pistols would be suitable for everyday carry (EDC) because there isn’t a big discrepancy between their weights — and they both have polymer frames. Do note, however, that a gun’s weight may also affect its accuracy because of recoil.

A recoil-sensitive person (i.e. someone who doesn’t like recoil) tends to be more accurate when shooting a heavier handgun because it tends to soak recoil.

Also, a front-heavy handgun will have less muzzle flip, which allows for faster follow-up shots when aiming with the iron sights, although this might not be an issue if you have a reflex sight installed (for general info on reflex sights, you might want to check out the Introduction part of the article I wrote for the Trijicon MRO).

If you don’t want to buy any of the optional 10-round, 15-round or 22-round magazines that Glock offers and you’re confident with your shooting skills, 13 JHPs of the heart-stopping .40 S&W getting pushed out of a Glock 23’s business end should be more than enough to protect yourself with.

However, if you don’t spend enough time in the range and you feel that those two extra rounds can be a lifesaver (again assuming you don’t want to spend extra on the aftermarket 15-round mag for the Glock 23), then go with the Glock 22. 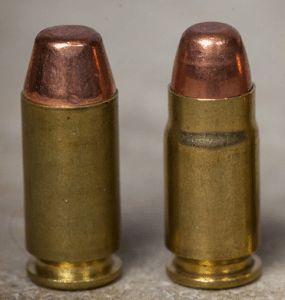 In case you’re the type who likes to fix things that aren’t broken, or you just want options, or you bought either pistol and you think the .40 S&W’s recoil is too snappy for your hands, you’ll be happy to know that both the Glock 22 and Glock 23 can converted from .40 S&W to .357 Sig.

The .357 SIG as an alternative is a great caliber for self defense, and in some ways even better than the .40 S&W. If you’ve shot a .357 magnum revolver before, you’ll understand why SIG Sauer developed the .357 SIG.

TO CONVERT OR NOT TO CONVERT — THE .357 SIG QUESTION 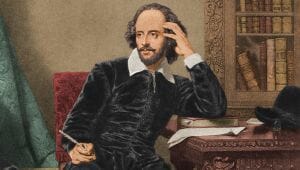 A typical 125-grain .357 magnum bullet fired from a 4-inch revolver barrel is unrivaled in penetration and stopping power.

Since almost every semi-auto handgun cannot be chambered for the .357 magnum because of that cartridge’s over-all length (OAL), and because semi-auto handguns allow for faster and more efficient reloads with their double stack magazines (compared to the 6-round speedloaders for most revolvers), SIG Sauer probably thought, why not neck down a .40 caliber rimmed cartridge (i.e. the 10mm, which is the .40 S&W’s magnumized mother) to accept a .35 caliber bullet?

A word of caution though. While the .357 Sig conversion for any of the two Glock pistols might sound like a great idea, factory ammunition for the .357 Sig can be either very expensive or hard to come by in certain states.

If you’re not reloading your own ammo, it might be practically worthless, and even if you are, the necked-down cartridge of the .357 Sig might be a tad harder to work with unless you have specialty dies that cost more $$$. Tread lightly on the .357 Sig idea.

These are both Glocks. Availability for upgrades won’t be an issue. Oh, and both have the same accessory rail in front of the frame so you can attach a laser or a flashlight if you want.

Nothing much can be said about pricing. Both handguns are priced exactly the same, info taken from Glock’s website. The Gen4 variant for each costs $549, while the Gen3 is considerably cheaper at $475 base price. If you want to know why the Gen3s are cheaper than the Gen4s, You can find them here. If not, then feel free to jump to the Conclusion.

he Glock 23 gets the nod for more practical reasons as it’s easier to conceal due to its slightly shorter barrel and grip. It can also use 15-round and even 22-round magazines, which totally negates the only real advantage the Glock 22 has to offer.

But as with everything in life, there are always exceptions:

If all of the above apply to you, you are one very unlucky individual. Get a Glock 22, period.

But if none of the conditions above apply to you, then the Glock 23 wins, hands down.