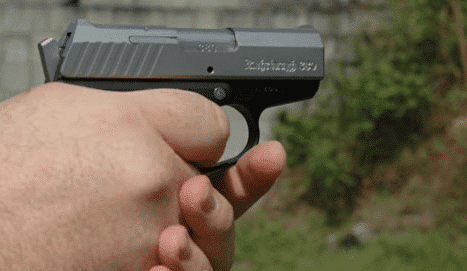 If you need a compact, small caliber semi-automatic handgun, the pocket pistol is the way to go.

Designed for concealed carry in either the front or back pocket of your pants, the pocket pistol is a suitable option for those who want to protect themselves and/or their family at any given time.

Personally, I purchased a pair of pocket pistols before going on a hiking trip. When you’re lugging sleeping bags, supplies and tent poles up a mountain, the last thing you want is the hassle of having to carry around long rifles.

So how do you settle on a decent pocket pistol? Today, we’ll talk about my top ten picks for modern, cutting edge pocket pistols for self-defense. We’ll breakdown pocket pistol features, price points and more.

In the end, I think you’ll agree that there are plenty of excellent options at your fingertips. 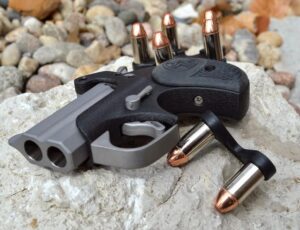 This snub-nosed revolver is tailor-made for conceal and carry. It features a patented rebounding hammer and is designed to fire heavy duty .45 ACP rounds.

The textured frame and bead-blasted anti-glare barrel make for accuracy as well as discretion. By taking the traditional black derringer and perfecting it for the modern age, Bond Arms have created one of the best pocket pistols around of the 21st Century.

The black crinkle powdercoat finish gives it a classic artisan design that runs parallel to its contemporary inner workings. The Backup’s got a cross-bolt safety, retracting firing pins and a spring-loaded, cammed locking lever. 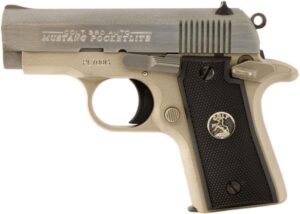 In 2000, Colt ceased production on the .380 Colt Mustang, but in recent years, they’ve gotten back into commercial production with a vengeance, releasing not one but two new models designed to accept the original Mustang’s parts.

This means that you can purchase the old parts for a song and use them in Colt’s new, cutting-edge pocket pistols.

My personal fave is the Colt Mustang Pocketlite, a polymer .380 redesign that offers clean shooting, a 6 + 1 capacity, a .757-inch wide slide and an overall gun length of just 5.5 inches.

Indeed, the largest, clunkiest part of the Pocketlite is its plastic grips which come in at a mere 1.075 inches.

While the tiny safety on this piece is a bit on the stiff side, everything else measures up to other single-action pocket pistols on the market.

The Pocketlite boasts a handsome aluminum alloy frame with an electroless nickel finish and the slide has a high brushed gloss. It also has high profile sights and a Commander-style hammer.

The MSRP on the .380 Mustang is $499, placing it in the same class as the Backup in terms of price point. That said, if you are a member of Gun Broker, you can sometimes find a lightly used Pocketlite for as little as $105.00. 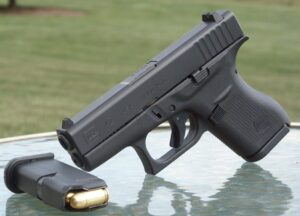 This .380 ACP automatic pistol is a bit large compared to most competitors’ pocket pistols, but it’s still a viable conceal and carry option. It’s got a 5.5 lb trigger pull and, at 5.94 inches in length, it’s the smallest pistol Glock has ever produced.

A lot of people have dismissed the .380 caliber as being inferior when it comes to taking out an opponent, but it has gained in popularity in recent years because it’s the most effective cartridge for a smaller size firearm.

The .380 is also ideal for beginners as you can learn how to fire one in a fraction of the time it takes to train with a larger higher velocity/higher recoil weapon. In this avid shooter’s humble opinion, the Glock 42 is one of the absolute best .380 concealed carry pistols. 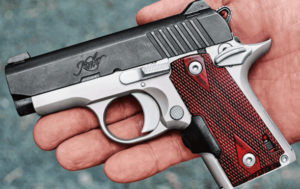 The Kimber Micro 9 with Crimson Trace Lasergrips is a 9mm 1911 model that is perfect for conceal and carry. It’s just 4.07 inches in length and 1.06 inches wide.

With a 6 bullet capacity, the Kimber Micro provides the shooter with a smooth trigger pull and moderate recoil. It features a flush fitting mag with finger grip extension and comes with a soft padded case.

It’s got white dot sights and a 16 lb recoil spring. An excellent firearm for defensive purposes, the Kimber Micro 9 is hardly a piece for competitive shooting or most outdoorsman’s needs, but it will have your back in a self-defense scenario. 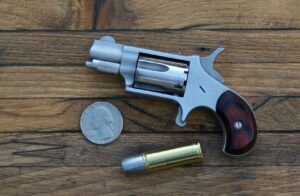 If you’re in the market for the best pocket revolver, NAA’s mini-revolver may just be the concealed carry pocket pistol for you.

North American Arms’ .22 LR is, by far, the most popular miniature revolver ever mass-produced. It is specifically offered in a holster grip configuration for conceal and carry purposes.

With a 1 1/8-inch barrel and a 5-shot capacity, the .22 LR is a mean little machine. The grip folds up to ensure optimal concealment and folds into a locked position for control when shooting.

At $256.00, it’s one of the most affordable concealed carry pistols around. 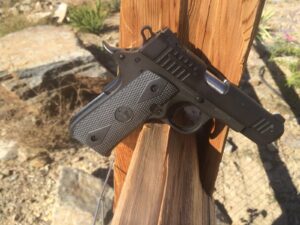 Finding a way to make a 1911 run dependably can be a bit tough. It’s not an exact science. But, somehow, Rock Island Armory has achieved just that.

This shrunken .380 model cuts down on recoil and offers users an easy to handle experience thanks to the squared serrations on both the front and rear of the slide.

A bit clunky for proper pocket carry, the Baby Rock is nevertheless a worthy conceal and carry gun that can serve as an IWB (Inside the Waistband) carry.

Its soft rubber grip panels make it comfortable to hold and a short trigger pull. The Baby Rock sells for $460.00. It also fits great in one of our recommended range bags. 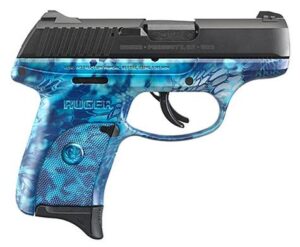 As a lifelong shooter, I was never so impressed with Ruger as I have been in the last couple of years. They really seem to have their finger on pulse and their ear to the street because they keep coming out with the things that every gun consumer is looking for.

With the LC9, they have proven that they’re really paying attention to what gun owners are saying in online forums and consumer feedback.

Previous models suffered from subpar triggers and cumbersome safety measures. The new LC9s have none of that. We’re talkin’ superior trigger, a snag-free profile and drift adjustable white 3-dot sights.

With a 7 + 1 ammo capacity and striker-fire action, the Ruger LC9 gives a lot of other concealed carry pistols a run for their money.

Each unit comes with a 7-round magazine and two mag basepads. At 1.08 lbs, it’s a lightweight pocket pistol with a 5.5 trigger pull, placing it firmly within the pantheon of perfect compact pocket pistols. 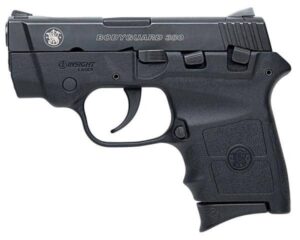 I’m just gonna be real with you, the Bodyguard is simply the coolest-looking gun on this list. With this one on your hip, you feel like a character straight outta Blade Runner.

Smith & Wesson’s M & P Bodyguard is another worthy .380 model with a sleek design and a stainless steel slide and barrel.

Weighing in at 12.3 ounces, it’s a compact and easy to conceal pocket pistol with drift adjustable sights and an ergonomic grip. Each unit comes with two magazines with finger groove and flat butt plate.

This iron-sighted double-action semi-auto pocket revolver has a 6 + 1 capacity and a smooth, flat plastic trigger.

The only drawback to this one is the heavier trigger pull. Most of the guns on this list have a trigger pull within the range of 5.5 whereas the Bodyguard has a 9.5 lb trigger pull.

Cabela’s sells the Bodyguard for a starting price of $349.99. 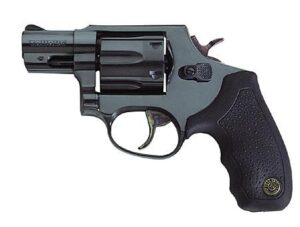 This double-action seven-shot snub-nosed revolver is the only wheelgun on this list, but it’s every bit as functional and reliable as the non-wheelgun models listed above.

This .357 Magnum‘s only real drawback is the six-shot limit, but it’s still head and shoulders above much of the competition and the serrated front sight provides superior visibility when compared to many of its counterparts.

At an average price point of $479.99, it won’t break the bank, but you’ll know that you’re getting your money’s worth at the same time. 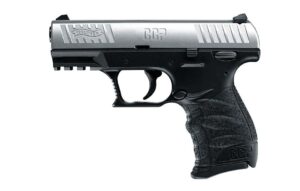 The CCP stands for Concealed Carry Pistol and this Walther model lives up to its namesake. A 9mm Luger, the CCP utilizes softcoil gas technology for gas-delayed blowback.

By directing gas pressure through a small port in the barrel, it slows down the rear motion of the slide.

This ensures that the empty cartridge casing will be properly ejected when fired.

With an 8-round capacity, the CCP is at the top of the heap when it comes to a concealed carry pistol that allows for rapid fire.

Its unique non-slip grip is a handy feature to have on rainy days or in other outdoor situations. It’s also got a reversible magazine release for left-handed or right-handed shooters. The front sight is interchangeable while the rear sight is adjustable.

Cabela’s stocks this one at a price point of $469.99, making it every bit as affordable as the other pocket pistols on our list.

So there you have it, these are my top ten picks for best modern, cutting edge pocket pistol. Each of them is a viable option for concealed and carry needs. I urge my readers to shop around and do their homework.

Although I’ve given you plenty to think about, it always helps to see what other reviewers and customers have to say about their personal experiences with any given firearm. Research is key when settling on the pistol that fits your preferences.

If you have any additional comments or suggestions please drop a comment below. Thanks and remember to protect yourself and your ears when shooting.