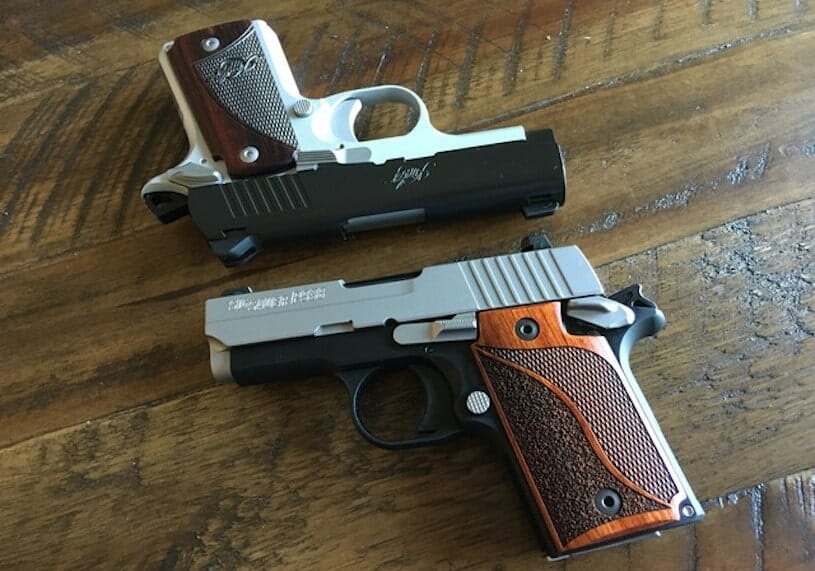 The 1911 has been an iconic handgun platform since the dawn of the 20th century. The .45 ACP is a monster of a pistol round, designed with enough stopping power to bring down calvary and drug crazed combatants.

Now take that same 1911 and shrink it to a subcompact weapon designed for concealed carry, the Kimber Micro 9 and the Sig P938 are two excellent options if you’re comfortable with single action handguns. The only question remains, which one is better?

For the most part, it’s a subjective matter, but choosing a weapon for concealed carry weapon, you have to be sure to choose the best one for you. So keeping that in mind, let’s take a look at both and make the decision a little easier. 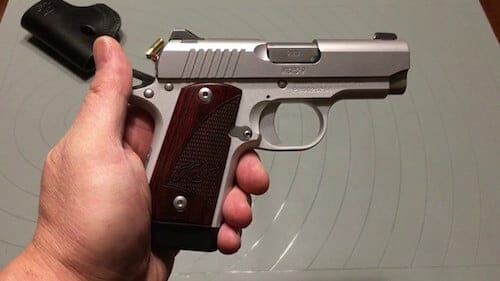 Colt never made a miniature 1911 in 9mm, but Kimber’s Micro 9 is ideal for concealed carry options since the 9mm is optimized for engaging a number of threats.

Empty, the weapon weighs 15.6 ounces. Magazines have a standard 6 round capacity with one in the chamber and an extended model with a 7 round capacity, which also has an extended base plate that provides an inch or so of extra real estate you wouldn’t usually have with the standard magazine. 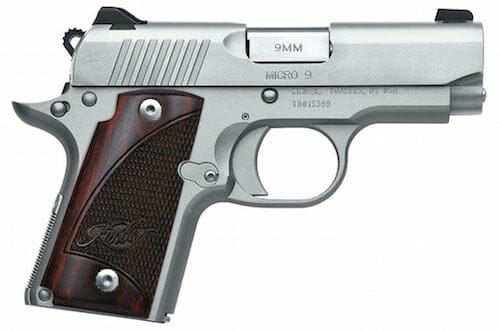 The Micro 9’s safety features are what you’d expect from a typical 1911, a beavertail safety and conventional thumb safety. If you do opt to carry a 1911, make sure you take the time to learn how single action handguns operate.

Single action handguns won’t fire until you chamber a round which will cock the hammer, or if you carry a round in the chamber and cock it when you prepare to fire. The thumb safety won’t operate unless you cock the weapon so you have a few options with how you choose to carry a Micro 9.

The overall appearance of the gun is the typical sleek Kimber fashion. You have a variety of finishes to choose from, as well as a number of added accessories such as night sights and crimson trace laser grips that are built into the hand guard.

In terms of relative size, the Sig P938 doesn’t fare much different from the Kimber Micro 9. Barrel length is marginally shorter coming in at 3” with a height of 5.9” and a with of 1.1” at the thickest part of the slide. The P938 weights a little more than the Micro 9, weighing in at an even 16 ounces. 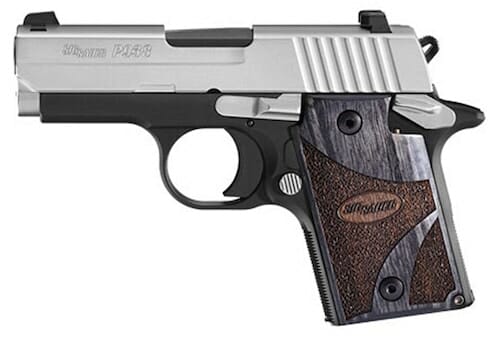 Like the Micro 9, the P938 comes with a standard magazine capacity of 6 rounds with one in the chamber but there are optional 7 round capacity magazines which also feature an extended base plate which is ideal for concealed carry holders with larger hands who need a little extra grip to comfortably seat the weapon in their hands.

The sights come standard with night sights, which are often an added feature and comes in a variety of finishes and with a large selection of accessories such as grips, engravings, and so on, but be prepared to spend a few hundred dollars more if you elect for any bonus features.

The trigger pull is comparable to the Kimber’s pull of seven and a half pounds when the trigger breaks, just be sure the weapon is cocked beforehand of course.

Apples to Apples, the Sig P938 Vs. Kimber Micro 9 are basically the same gun. From the physical specifications to the operation of the firearm, the two weapons are nearly identical.

Rather or not you are proficient in the operation of a single action handgun should be the largest determining factor before deciding between on or the other. 1911’s and their micro counterparts are very different than the ever popular point and shoot striker fired polymer handguns.

Once you’re comfortable with single action guns, you ought to note the thumb safety differences. The Micro 9 has a thumb safety while the P938 does only has a right handed thumb safety.

If you’re a left handed shooter, you ought to opt for the latter since 1911’s are fairly complex while shooting off hand.