In the first four rounds of our Handgun Showdown series, we’ve been comparing different Glock pistols, then in round 5 we compared two Saturday Night Specials both manufactured by Cobra Enterprises.

Today we’re taking a look at two SIG Sauer pistols: the full-size SIG P226 and the compact SIG P229, both modular pistols that can be chambered for the same three handgun calibers 9mm, .357 SIG and .40 S&W and popular among law enforcement officers, the military and civilians.

The Tale of the Tape 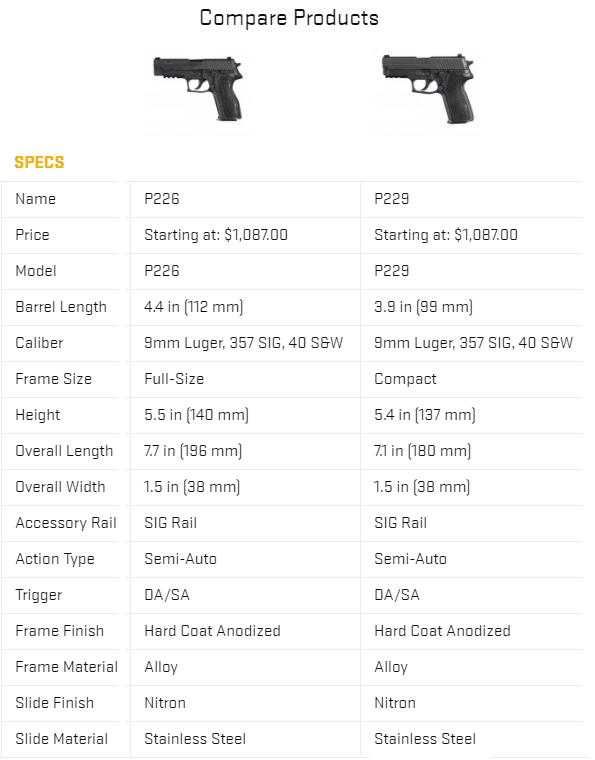 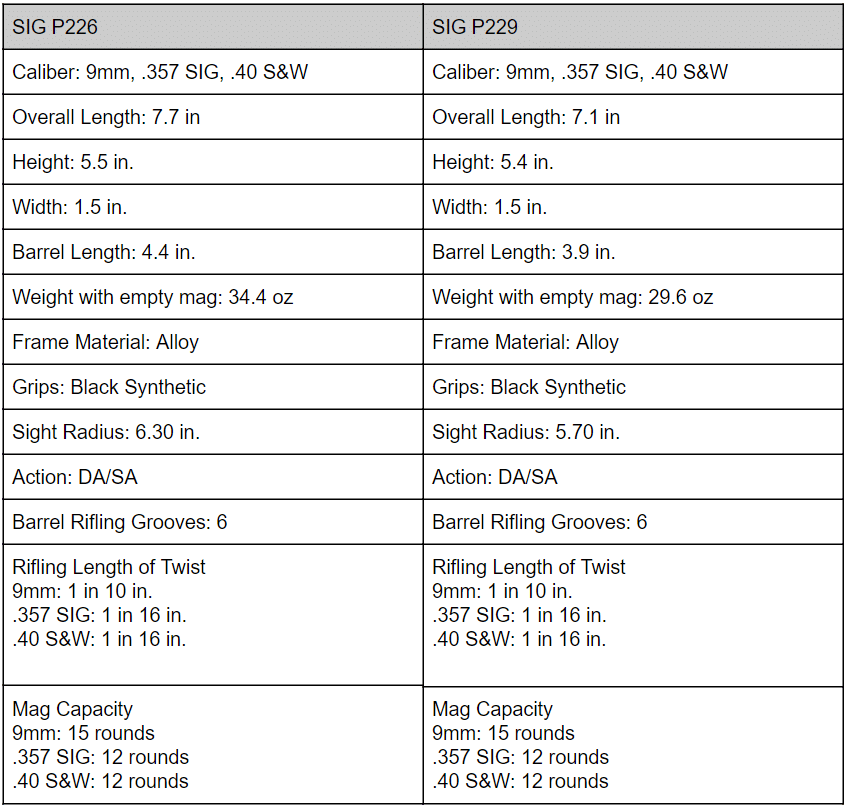 If by looking at the tables above you think to yourself that there’s not much difference between the P226 and the P229, you are probably correct.

Both have practically the same frame dimensions, the same exact magazine capacity, the same frame and slide material, the same SA/DA trigger pull weight, and the same number of rifling grooves and rifling length of twist. Even the calibers they can use are the same.

And they both have the same accessory rail for laser and flash light attachments.

The only real differences between them are their barrel, slide and sight radius lengths. So what gives?

If you haven’t been following our series of handgun showdowns, you might want to. In round 1, we discussed the differences between the Glock 22 and the Glock 23. Both are practically the same pistols chambered for the .40 S&W. The only things different between them are their barrel and slide lengths and their magazine capacity.

Well, for this round, both SIG Sauer pistols being compared have the same magazine capacity despite one being a tad smaller than the other. But both pistols can be bought chambered in one of three different handgun calibers: 9mm, .357 SIG and .40 S&W. That’s what’s so different this time.

When does size matter?

Let’s say you’re a first time buyer, and you’ve read somewhere on the Interwebz that these SIG pistols (particularly the full-size P226) used to be the standard sidearm for the Navy SEALs and you decided you want one (even when you know that for some odd reason, the Navy SEALs replaced them with the Glock 19).

You browse through SIG Sauer’s website and find out that the P226 has a smaller compact brother (technically, “compact” in these contexts is incorrect — it’s supposed to be labeled “mid-size”) called the P229. Now you’re getting confused — which one would you buy if both are practically the same pistols, both have the same round count and both are priced the same?

We all know that a handgun with longer slide and a longer barrel will have a relatively softer recoil, and better recoil control will result to faster re-acquisition of sights and faster follow-up shots. A longer sight radius will also result in more accurate shots.

But we also know that a shorter grip won’t print easily, so guns with shorter grips will be easier to carry concealed.

So it looks like the P226 has two things going for it, while the P229 only has one. Does this mean the P226 is going to be the better option? Let’s find out.

Just so you’ll have an easier time deciding, let’s see how having a longer slide and barrel and more weight will favor the P226 as far as recoil control in all of the three handgun calibers it will chamber. 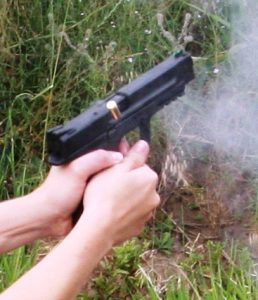 When a hammer-fired semi-automatic handgun’s trigger is pulled, the spring-loaded hammer is released by the trigger’s sear to hit the firing pin which strikes the chambered cartridge’s primer. The primer then ignites the powder charge in the cartridge.

The powder burns quickly, creating an astronomically high amount of pressure (take note of this part) which results in the bullet being pushed out the only available direction — towards the muzzle.

As the bullet is pushed out of the cartridge and out of the muzzle, it pushes the slide in the opposite direction — towards the person holding the gun (take note of this part too). The slide absorbs some of the force of recoil by ejecting the empty cartridge and re-cocking the hammer.

The recoil spring won’t let the slide rest in its rearward position so it pushes the slide forward (or it pulls it back to its original position, whichever way you want to look at it), and on its way to full battery the slide snags a fresh cartridge protruding from the lip of the magazine and pushes it into the chamber, thus completing the whole cycle. The handgun is then ready for another shot.

This astronomically high amount of pressure varies across different handgun calibers. This pressure sets four things in motion at the same time (but because our human senses can only perceive too many things happening at once, we see it in this sequence):

Because this pressure varies depending on a few things, let’s look at how each of the handgun calibers would recoil when fired from either handgun.

We can also see that the weight of a firearm is inversely proportional to recoil. The heavier a gun is, the less it recoils.

For all the people out there who have trouble with Physics or Math, I created some charts to better illustrate these points.

Let’s do things a little differently. We’ll not be including the .357 SIG this time because its recoil velocities are pretty much the same as the .40 S&W’s.

If we compare recoil velocities between a SIG P229 chambered for the .40 S&W (17.29 fps) and the same SIG P229 chambered for the 9mm (14.32 fps), the difference is ~17.17% in recoil velocity. This means there won’t be much difference in accuracy and sight re-acquisition when shooting any of the three handgun calibers using the same mid-size pistol.

What if we compare the recoil velocity between a SIG P226 chambered for the 9mm and a SIG P229 chambered for the .40 S&W? We get a difference of ~28.68% in recoil velocities. This means if you’re comfortable shooting a full-size 9mm pistol and you decided to try a mid-size .40 S&W, you might find it harder to shoot the mid-size pistol as fast and as accurate. We’ll get more into this later.

To spare everyone all the headache from trying to make sense of it, I view recoil velocity as how fast the gun would move upon recoil when fired from an open space (like if it was hanging in the air and it wouldn’t be affected by any type of friction), while I view recoil energy as that force I feel in my hands whenever I fire a gun. Simply put, recoil energy to me is what other people call “felt recoil”.

Because we’re all differently built on a physiological level, we’ll all have varying levels of strength. The only body parts that get punished a lot when shooting heavy-recoiling handguns are the strong hand (not so much the supporting hand) — specifically that web between the thumb and the index finger, and the wrist. Thus, we will all react differently to a gun’s recoil energy.

The long and short of it: a higher recoil energy means a more painful shooting experience, while a higher recoil velocity means higher muzzle rise, slower re-acquisition of sights and slower follow-up shots.

From the shape of the graph, we can already see that the 9mm has significantly less recoil energy compared to the other two handgun calibers when fired from either a SIG P226 or P229. We can also see that the .357 SIG and the .40 S&W have about the same recoil energy.

Let’s try and crunch the numbers to get to the specifics.

Comparing two SIG P229s, one chambered for .40 S&W and the other chambered for 9mm, we get a difference of 31.39% in recoil energy. That is quite a bit of felt recoil. But it simply means the .40 S&W is a potent round and will have more felt recoil compared to a 9mm when fired from a mid-size pistol.

Comparing SIG P229 chambered for .40 S&W and SIG P226 chambered for 9mm, the difference in recoil energy is 40.93%. This means if you’re comfortable with a full-size 9mm and you’ve never fired a mid-size .40 S&W handgun before, you might hurt your hands if you decide to switch to the smaller handgun.

So what’s the verdict?

Here are some things to consider before purchasing either of the two pistols:

The difference in recoil velocities and recoil energies between the two handguns is negligible assuming both are chambered for the same caliber. So if you’re wondering whether you should get a P226 or a P229 as a CCW for self defense (in whichever of the three handgun calibers available that you prefer), chances are the P229 will be the better option for you. 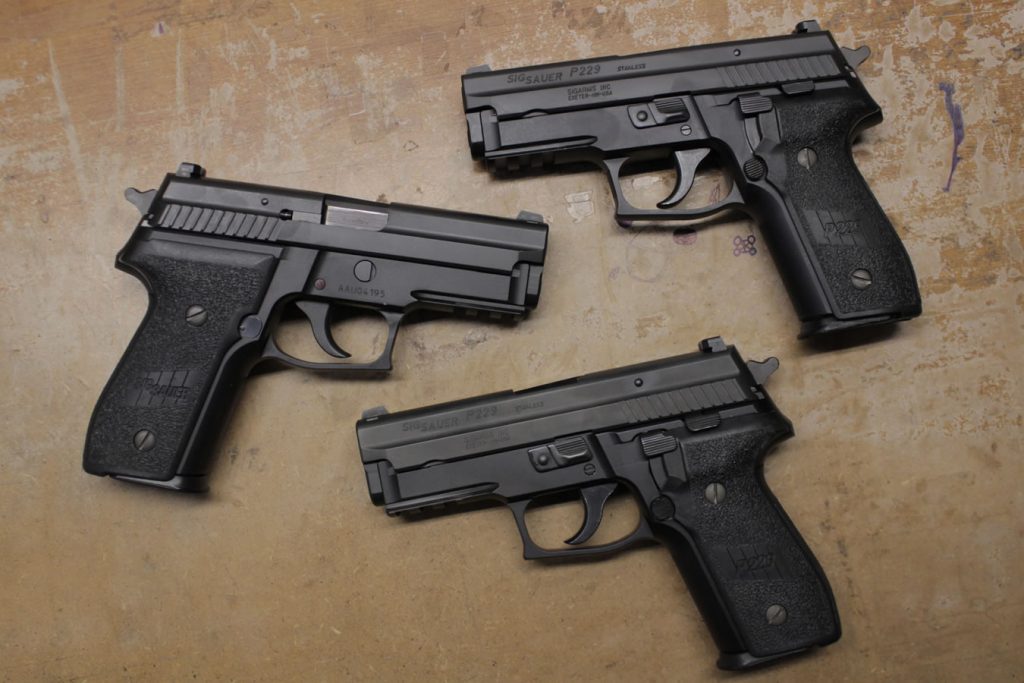 If you’ve only ever shot full-size 9mm handguns and you’re looking to buy your first handgun in .40 S&W, you might find the SIG P229’s recoil unpleasant, maybe even painful if you’re recoil-shy. Go to your nearby range, rent it and try shooting it first. If you don’t like the way it recoils, it’ll make more sense to purchase the SIG P226.

The slightly longer barrel, slide and sight radius of the P226 making the gun a bit more accurate still holds true, but only to a small extent. Considering how all the three calibers it can chamber are primarily used in self defense situations where people instinctively point and shoot, I highly doubt that extra 0.5 inch would offer any significant advantage — if anything it only makes the P226 a bit harder to conceal.

As far as I’m concerned, SIG Sauer is cannibalizing their P226 with their P229.

Due to the fact that the relatively smaller SIG P229 has the same ammo capacity as the SIG P226, and there is very negligible difference between the two handguns as far as handling and recoil control, I don’t see the point in buying a SIG P226.

The P229 also having a smaller grip area will be a bit easier to conceal. But if for some reason, you have ginormous hands and you think you won’t get a solid purchase on the smaller grip, the P226 will be the better option.

Also, if you play IPSC or IDPA and you need all the advantage you can get from a slightly heavier handgun with a longer slide, barrel and sight radius, (assuming you’re a cheapskate that an STI double-stack 2011 in .38 Super would be way too expensive for you, and these are the only two handguns you can choose from) then by all means get the P226.

For me personally, I just don’t see the point in getting the full-size P226 when the mid-size P229 does everything it can do, is relatively easier to conceal, has the same mag capacity and costs the exact same $$$.

I think anyone who can make sense of all the graphs I put above and all the Mathcraft I did would agree that all things considered, the P229 wins over the P226.