The 40. and 45. caliber bullets are by no means as close as the may look on paper and if you’re feeling confident enough with the 40. caliber and want something with a bit more of a kick then it’s best that you fully arm yourself with the details of each before you step up to a .45 caliber bullet.

First a bit of background

.40 Cal – Designed in 1990 by S&W (Smith & Wesson), the .40 Cal bullet was made in response to the FBI wanting a replacement for their .38 Cal handguns. They wanted something that would give them more ammunition capacity, greater reliability, was easier to reload and had less velocity. And so the .40 Cal was developed and is now used by all agents in the field.

.45 Cal – Because the underperformance of double action revolvers such as the .303 British and .38 Long Colt in the wars of the early 20th Century, both the American Army and Cavalry requested the harder hitting .45 Cal. The first model came out in 1905 and was later modified to produce the .45 ACP cartridge.

Though the measurements and ‘stopping power’ of each bullet may differ they do use the same type of bullet: Full Metal Jacketed and Jacketed Hollow Point. 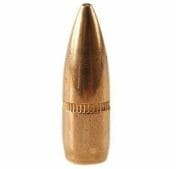 Made in lead, the projectiles in these come encased in a copper jacket. An FMJ bullet penetrates well but doesn’t provide expansion on impact. This is noteworthy as it may continue through the target and hit other bystanders and subsequently, most regard these as a great purchase for target practice. 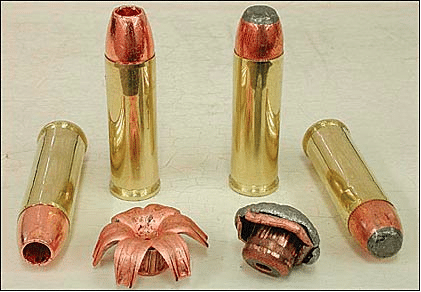 In opposition to FMJ’s, Jacketed Hollow Point bullets do offer expansion on impact creating a larger amount of damage and reducing the chance of peripheral damage by slowing the bullet down due to the jacketed copper cartridge. If your decision to buy guns for self-defense, then it is highly recommended that you get this type of bullet.

The most obvious difference between these two is the caliber and it’s worth knowing a couple of things about it.

The caliber or calibre of a bullet is the diameter of the entire unit or cartridge as it is more commonly known. For example, a .45 caliber bullet has a diameter of .45 inches and can be referred to as a “.45” or “.45 Cal”. This can also be expressed through the metric scale. A .45 Cal bullet is 11.43 mm. When using the metric scale it is common for the length to be expressed too e.g. 9mm x 19mm means that the bullet has a diameter of 9mm and a length of 19mm

When testing bullets and compiling ballistic reports on them, other measurements are taken into consideration. They are:

The grain is what gives a bullet its punch and because the laws of physics demand the higher the weight of an object, the more powerful the impact is; the higher the grain of a bullet, the more damage you will inevitably cause. This effect is commonly referred to as a bullets’ “stopping power“.

A .40 Cal bullet has grains of between 115 and 175, whereas a .45 Cal bullet has between 185 and 255 so it’s not difficult to see that .45 Cal is going to have considerably more stopping power and give you more bang for your buck.

Velocity refers to the speed of the bullet in feet per second (ft/s) when it leaves the barrel. Interestingly for all the extra power that the .45 has, it’s actual velocity is less than it’s .40 Cal counterpoint.

For a clearer ballistic comparison of the two check out this table below or go here for more ballistic information on other caliber bullets.

The ballistics report is only one side of the story though and other factors do come in to play when comparing the two bullets. Here are the ones we think you should be most aware of.

A lot of the accuracy comes down to quite a number of factors such as the gun used, wind velocity at various distances, barrel size and yes, even the competence of the shooter themselves. Some people can’t hit a barn door with a truck tire.

Both are excellent at short range, however, even if you’re a crack shot, the velocity of the bullet will affect its accuracy over longer distances. The .45 Cal has a lower velocity and therefore more focus must be placed on trajectory when shooting the ammo.

The recoil of a firearm should never be ignored and although the .45 Cal has greater penetration, the recoil is less than that of a .40 Cal.

Obviously, this is subjective to the shooter but to give you an idea of the difference, .40 Cal has been described as “sharp” and with a real snap which makes it slower to re-aim for follow up shots than the .45 Cal.

That said, the .45 Cal is known to push shooter’s hands back instead of up and doesn’t have a lot of muzzle flip.

For more details on each of the bestsellers on this page check out this page. Bare in mind that these are just suggestions and other lesser known brands will work just as competently.

All these types have their own idiosyncrasies and you should be sure to test them out at a firing range before making any final decisions. Finding the right match for your handgun is essential.

You should now have a good general idea of the differences between these two bullets and be able to make an informed decision as to what suits you best.

Remember if you are looking to buy for self-defense then a hollow point is probably the best choice for you as the expansion is good enough to stop anyone in their tracks.

If you want bullets purely for the firing range then the cheaper Full Metal Jacket is the one for you.

There is no such thing as not enough research when it comes to buying firearms so make sure to do your homework. Enjoy and be safe when shooting.