Cobras. People with ophidiophobia fear them. Snake charmers love them.

Snakes being associated with firearms are nothing new. Elite revolver enthusiasts swear by and drool over their snake guns — the Cobra in .38 Special and the King Cobra in .357 Magnum, two of the most iconic revolvers Colt has ever manufactured. There are also the Diamondback, the Python and the Anaconda — topics for another day.

But while the rich have practically unlimited choices, the penniless who just wants a gun to protect himself with — and the run-of-the-mill lawbreaker who sees guns as essential tools of the trade — have to make do with whatever Saturday Night Special is available from their friendly neighborhood gun dealer.

For the last four rounds of our series of Handgun Showdowns, we’ve been comparing Glocks — blocky, quite underwhelming as far as aesthetics go (at least in my opinion), but super reliable polymer handguns available everywhere at very appealing price points. It’s no wonder after over three decades of the first Glock being released, it has dethroned some of the most established classic steel guns from a century ago in popularity contests.

But as remarkable as they are, Glocks, like any other firearm, were made for one thing: to incapacitate and to take life — for better or for worse. And in that regard, the two handguns we’re comparing today are no different than Glocks.

For the first time in this series, we’ll take an unusual detour. We’re comparing… Cobras.

Don’t Judge a Gun by its Looks

I swear to God, I’m chuckling as I’m writing this, and my wife is giving me that weird look.

Compared to Glocks, these Cobras (the semi-autos, not the above-mentioned snake revolvers from Colt) are way up there on the ugliness scale. Glocks are beautiful compared to these things. The only other modern semi-auto handguns these would win over in a beauty contest are the Hi-Points, and even then it’ll not be a convincing win.

I’m going bonkers just looking at the photos. What were the engineers thinking when they designed these things?

I’m no firearms engineer, but common sense tells me the cheapest handguns have to have over-sized slides because of the alloy used for them.

When a typical semi-auto handgun is fired, what happens is the slide absorbs the force of the recoil and is pushed rearward by that force, extracting and ejecting the empty case in the chamber, and upon being pushed by the recoil spring forward it snags a fresh cartridge from the lip of the magazine and forces it into the chamber. The gun is back in full battery, ready for the user to pull the trigger for the next shot, afterward another round of cycling ensues.

Yes, that’s an oversimplified version of what’s really happening, but the point is, the slide needs to be durable enough for the semi-auto handgun to function the way it’s supposed to. The “auto” in semi-auto means it has to load a new round after the one in the chamber is fired, hence the term “autoloader”.

If a slide made of cheap alloy is designed to be thin just for aesthetics, it will likely be prone to cracks and breaks after just a hundred rounds of .380 ACP, probably even explode.

The .380 ACP might be a pussycat compared to the .357 magnum, but its cartridge rated for 21,500 psi (148 MPa) of maximum pressure will still beat the crap out of any alloy handgun’s slide especially with repeated shots.

In the case of the Cobra 380s, a zinc alloy called Zamak is cast around the already thick block of steel breach. All the thickness and blockiness result in these handguns being durable but ugly and way too heavy for their size, especially when compared to properly manufactured works of art like an officer-size 1911.

But that’s enough talk about aesthetics for now. Let’s get to the meat.

The Tale of the Tape

The table above shows the following differences between the two:

The Cobra FS 380’s slide is an inch longer, which will make it the heavier handgun between the two. This means it’ll shoot just a tad bit more accurate.

Being the longer of the two, it’ll also have a slightly longer sight radius, which will also lead to marginally better accuracy. It’ll also be the heavier of the two because of the longer slide length, and the heavier the gun, the easier it is to control its recoil. 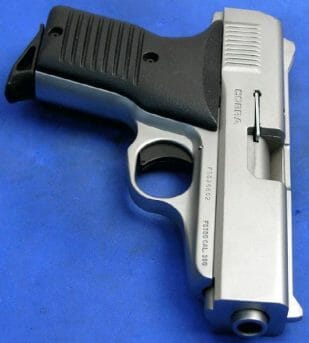 Having a taller height, the Cobra FS 380 has a longer grip area, which also allows for a solid purchase that results to better recoil control.

And since the longer grip will accommodate a longer magazine, the Cobra FS 380 also has two additional rounds in the mag.

But in the context of having seven rounds vs. five rounds of the same .380 ACP, that’s a whopping 29% difference in ammo capacity, again in favor of the Cobra FS 380. 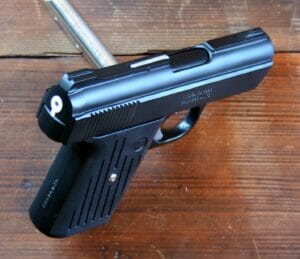 As far as dimensions, on paper it looks like the FS 380 is leagues ahead compared to its smaller brother the CA 380. It should be more controllable, much easier to shoot, and a bit more accurate.

But the Cobra CA 380’s dimensions will make it easier to conceal, right?

Let’s not jump into conclusions yet. Why don’t we dig a little deeper and focus on the second row of the table: Caliber? 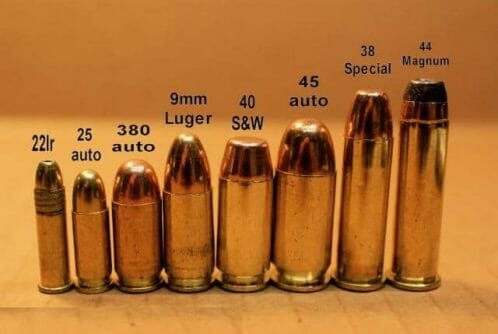 For years, people have been arguing over whether the .380 can be considered effective as a self defense round.

The .45 ACP purists would quickly dismiss the notion of carrying a gun chambered in .380 ACP, the common argument being it won’t penetrate enough because of its lighter bullets. And while both the .45 ACP’s and the .380 ACP’s velocities are similar (pegged at around 850 to 900 feet per second), the latter will penetrate deeper because it is heavier. The latter will also create bigger holes because of its wider cross-sectional surface area. Thus the .380 ACP won’t be as reliable as the .45 ACP.

The .40 S&W crowd wouldn’t even bother with the .380 ACP, what with their favorite handgun caliber already being labeled the 40 “short & weak” being it’s a compromise between the .45 ACP and the 9mm.

The 9mm fans wouldn’t touch the .380 ACP with a 10-foot pole, because seriously, when the consensus on your preferred handgun caliber is it’s the weakest of the three most common self defense rounds and the only thing it has going for it is its speed, why would you even consider the light but slow .380 ACP? At least 9mm jacketed hollow points are known to reliably mushroom upon impact and will give the .45 ACP a run for its money if we’re talking terminal performance.

I personally believe that a .22 LR which is a much, much weaker round compared to the .380 ACP can be a good self defense option because of the following reasons: 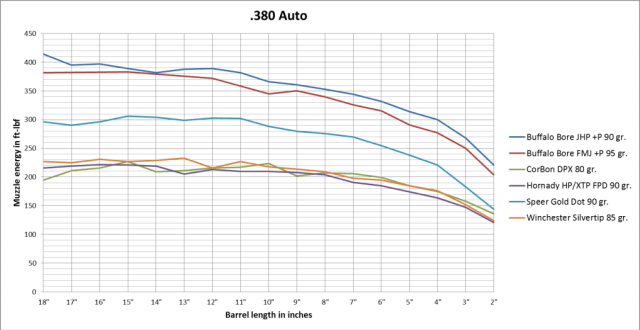 The .380 ACP might not be as powerful as any of the three previously mentioned semi-auto handgun calibers, but its 95-grain .355-inch-diameter bullet speeding out of a 3.5-inch barrel at ~950 feet per second is nothing to scoff at. It is more powerful than a .22 LR.

This ballistic performance means if you actually have to shoot someone with a .380 ACP, you will incapacitate them faster than if you were to stab them with an ice pick or shoot them with a .22 LR. And its lower recoil compared to the more powerful handgun calibers makes for faster follow-up shots. 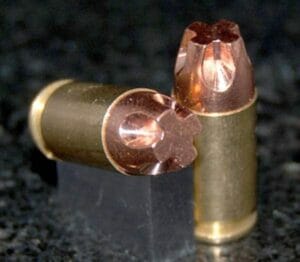 If those reasons are not enough, maybe you’ve been living under a rock in the last few years and haven’t heard of Lehigh Defense’s Xtreme Penetrator. In a nutshell, this bullet design is capable of better penetration than FMJs’ while creating temporary and permanent wound channels much better than JHPs.

But differences in terminal ballistics between these rounds are largely academic. The point of self defense is to stop the threat. So really, at the end of the day it isn’t so much about the handgun you own or the caliber it’s chambered for as it is proper shot placement.

Which is better then?

Just because the .380 ACP can be a reliable self defense round doesn’t mean all’s well for the two Cobra handguns we’re comparing.

The quality of these handguns is questionable at best that we can’t recommend purchasing either models for home defense or concealed carry. 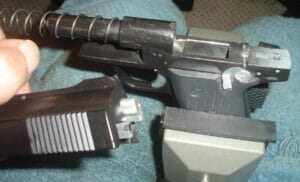 We can’t blame anyone if they’re unaware of the issues surrounding these pistols, they’re not really that popular. But run a Google search for “Cobra 380 problems“.

The first three pages of search results are filled with complaints about these guns jamming, i.e. either they fail to extract or eject the chambered empties, or the bullets nosedive, i.e. the slide fails to go in complete battery because the new bullet from the mag wouldn’t chamber.

Some of the fixes for these common issue are polishing the barrel’s feed ramp, polishing the chamber throat, cleaning and lubing the internals, and using aftermarket magazines.

So if they aren’t any good, why buy them?

There are a number of good options when shopping for a .380 ACP handgun for home defense and CCW, one most notable being the Bersa Thunder 380. It’ll cost an extra ~$100 over a brand-new Cobra pistol in .380 ACP, and while there are also reports of that handgun jamming, those aren’t as notoriously common as reports of Cobra’s .380 pistols jamming.

But as was stated in this article’s introduction, if you don’t have a lot of money to buy yourself a decent .380 ACP handgun but you still want something to defend yourself with, you might find prices for these Cobra pistols extremely appealing. Some can be bought for as low as $75 in the used market!

If you do decide to take the plunge, or if you already have a Cobra in .380 ACP, and you can’t get it to function properly, you can do a couple things with it:

Joke’s on me if you didn’t get it…

The best piece of advice I can give is find a competent gunsmith and have him tune your Cobra handgun to make it function reliably.

Granted, you didn’t buy a $75 piece just to spend $100 on gunsmith labor, but all it really takes is proper polishing of the chamber throat and feed ramp, perhaps polishing the inner surfaces of the magazine, installing a good recoil spring and polishing the tracks on the slide and frame.

If those things would cost $100 or more, try making friends with the gunsmith and asking for a discount. It’s hard, I know. But at least try.

Then again if having it tuned by a gunsmith would run you $100, then you only spent $175 on a .380 ACP handgun that functions as great as any other handguns that are two to three times more expensive.

Better yet, if you can DIY tune it and you can get it to function say 85% of the time, you got yourself a great plinking piece for 75 smackers. That’s a steal.

This has to be my worst attempt yet at writing a lighthearted article. SMH.

If both of these handguns could be reliable out of the box and we would only compare them on their dimensions and ammo capacity, I would easily make the conclusion that the Cobra FS 380 wins hands down.

But I’m not kidding when I say that I can’t recommend either model for the serious buyer looking for a reliable self defense handgun. The only time I would recommend the FS 380 to anyone is if they have a gunsmith friend.

So, for Round 5 of our series of Handgun Showdowns, it’s a split decision that’s very slightly in favor of the Cobra FS 380.