CORROSIVE AMMUNITION AND HOW TO CLEAN YOUR GUN

Military surplus ammunition is great. Powerful, cheap, and with huge stopping power, there is nothing more satisfying than unloading a few (hundred) rounds of this stuff from your AK. If you haven’t tried it yet, do so.

But wait. Some of these rounds have a huge problem – they are corrosive. That might come as a shock. After all, why would manufacturers make rounds, especially for military forces, that can damage a rifle? Well, I sort of already said why. These rounds are cheap.

And, of course, soldiers are made to strip and clean their guns on an almost daily basis, so the corrosive salts produced by these weapons don’t have time to do any damage. You should do the same, especially after using ammunition which is potentially corrosive.

Is My Ammo Corrosive?

Well, unfortunately, it’s pretty hard to tell. Military surplus ammo is made in a bewildering array of variants, and depending on the type, the year it was made, or even the factory it was made in, the ammo you have could be corrosive.

The prime culprit is the primer used in these rounds. Some primers leave behind salts in your rifle after being fired, and these salts react with water from the air. We all know what happens next – these salts start to corrode the metal of your gun. 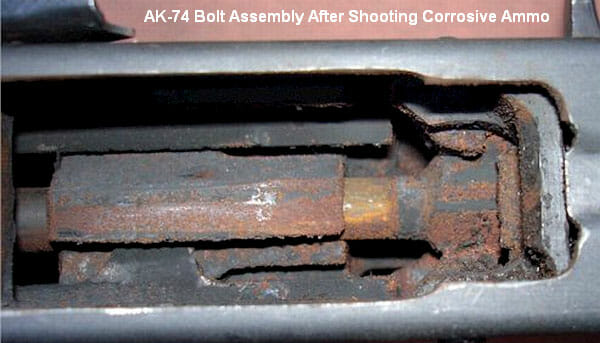 There are two basic types of centerfire primers, Boxer and Berdan. Boxer primers are not corrosive, whilst some types of Berdan primer are. I can’t, unfortunately, give you a list, because I don’t have one, so to my mind it’s best to assume that if you are firing ammunition with a Berdan primer, it is corrosive.

That means you are going to have to clean your gun after firing this ammo.

I’m not going to give you the same old lecture about cleaning your gun every time you use it. But you should definitely clean it after using corrosive ammo. The same day, if possible, because even a small amount of rust can begin a process of deterioration that is hard to stop once it gets going.

People in Texas tell me that, in their dry climate, you can go longer than 24 hours without cleaning a rifle, but I don’t believe them.

Now. There are a lot of articles out there that recommend using a crazy array of different chemicals and techniques for cleaning your rifle after using corrosive ammunition. Some say you should use ammonia, soap, or other household chemicals.

Don’t do that. Keep it simple, and use hot water, or spend a few bucks on a decent cleaning kit. Trust me – it’s well worth it.

If you’d rather just use water, the process is actually really simple. Field-strip your AK, and put it under the hot tap. Use water that is as hot as possible, because this way it will dry more quickly. If your tap doesn’t go hot enough, or if your sink isn’t big enough to take your rifle, boil a kettle and run that water through your rifle.

Make sure the water gets to the gas tube, where most of the salts are probably hiding. Then, just let the rifle sit and dry, and then clean as normal.

It’s as simple as that.

(For more info on ammo and calibers check out our ammo guide or see our top recommended online ammo vendors).

2 thoughts on “Corrosive Ammunition and How To Clean Your Gun”