In a recent article, we compared two Glock pistols both chambered for the .40 S&W in an attempt to help our readers decide which for them would be the better fit. We pitted the larger and slightly more accurate Glock 22 against the slightly smaller but more easily concealable Glock 23.

We determined that except for a few use case scenarios where the Glock 22 will be appropriate, the Glock 23 is going to be the superior choice in most situations.

But what if we compare the Glock 23 against another Glock pistol that has the exact same specs but is chambered instead for the smaller and faster 9x19mm Parabellum (more commonly referred to as the 9mm)? Will the Glock 23 still come out on top? 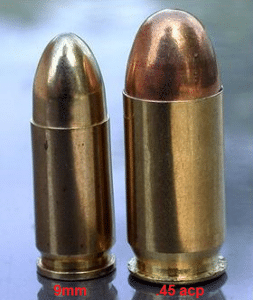 The .355 caliber round commonly referred to today as 9mm or “9 mill” has been around for more than a century. Since it came out in Germany in 1902, it has seen use in countless wars and had been chambered in a lot of different handguns and submachine guns (SMGs).

Its popularity has never diminished and until today, most countries’ law enforcement and military still use it in their sidearms and SMGs, a testament to its effectivity. Here are some of the reasons why:

The Tale Of The Tape 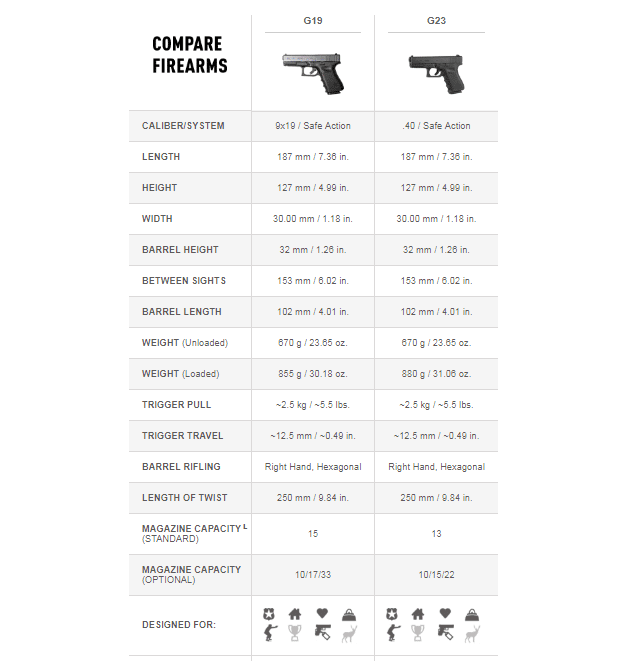 The tables above show that both the Glock 19 and the Glock 23 use the same size frame and thus, almost everything about the two is the same.

Concealability shouldn’t be an issue for both these pistols but if you want to know what your best CCW holster options are, check out this exhaustive list of holsters we created.

The only real differences between the two are the calibers they use and the maximum number of rounds that can be loaded in their respective magazines. 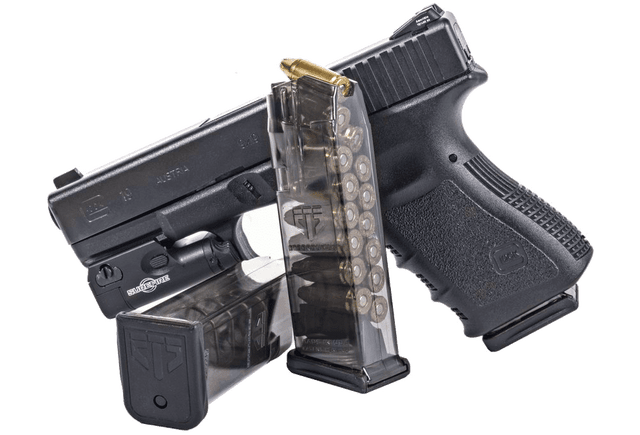 There isn’t really a world of difference between 15 rounds of 9mm vs. 13 rounds of .40 S&W. For years, both have been proven effective for self defense.

Even if you’re facing a mob of, say, five to six people intent on disemboweling you (which is very unlikely if you’re not in the military or law enforcement), 15 rounds of 9mm or 13 rounds of .40 S&W are plenty of firepower. You can always reload with a fresh mag in the event that you’ll need more.

So, Which is Better?

Since the Glock 19 and the Glock 23 are practically the same pistols, this comparison will revolve around the two different calibers they use, how effective each can be for self defense situations and how each can affect their respective gun’s handling and accuracy.

As mentioned in my Glock 22 vs. Glock 23 comparison, the .40 S&W is a great option for self defense. It offers the best of both the 9mm and the .45 ACP and thus is a compromise between both.

But there were a few things not mentioned in that article. 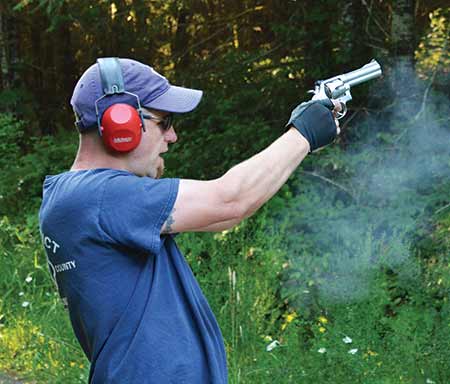 The .40 S&W tends to have a very snappy recoil. In comparison, the 9mm doesn’t have as much recoil — only comparable to a .38 Special fired in a 4-inch barrel alloy revolver. The lighter weight of 9mm bullets doesn’t “kick” like the .40 S&W’s heavier bullets.

Personally, I find the .40 S&W’s recoil to be relatively manageable, and the 9mm’s recoil to be significantly more manageable. I would further argue that both are nothing compared to the .44 magnum rounds shot through a 6-inch Taurus Raging Bull — which just kicks like a damn mule.

Even the .357 magnum’s recoil, especially when fired from a 2-inch snubnose with slim grips, is just plain unmanageable. It’s so bad that it hurts my hands after I fire 10 rounds of hot-loaded 158 grains moving at speeds of around 1,100 fps out of a short barrel.

I would be a happy camper with either the Glock 19 or the Glock 23 for EDC without worrying about recoil. But your mileage may vary. 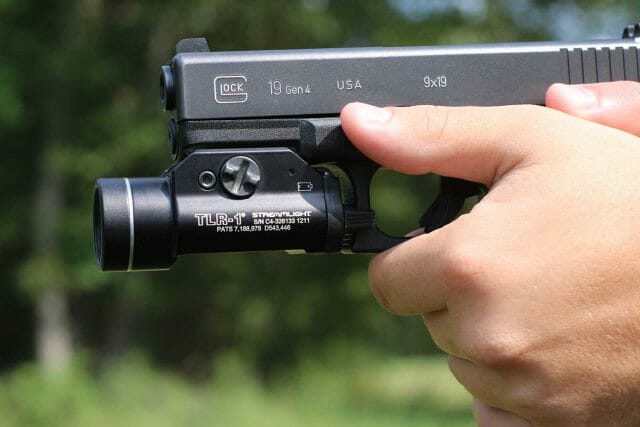 If it’s your first time to buy a semi-auto pistol and you haven’t tried shooting either caliber, go to your nearby range and try shooting their rental guns in both the .40 S&W and the 9mm to see which caliber you can handle better. 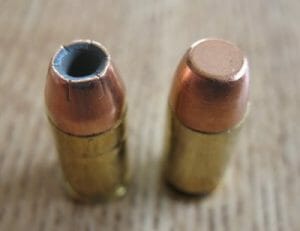 If you’re carrying the Glock 23, you can load it with whatever .40 S&W ammo you can get your hands on. Full-metal jacket (FMJ) should be okay because by virtue of its inherently larger bullet diameter, the .40 S&W will make bigger holes than the 9mm.

But if you’re loading your Glock 23 with FMJs, just make sure you get the flat nose (FMJ-FN) type bullets. The wider the meplat (i.e. tip of the bullet), the more violent tissue destruction, which results to faster bad guy incapacitation.

FMJs are usually much more affordable than jacketed hollow points (JHPs). If money or ammo availability will be an issue, the Glock 23 will be the better choice.

Available Loads For Self Defense 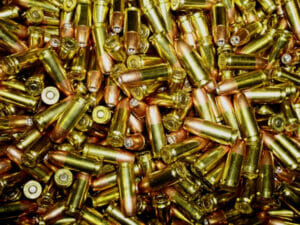 If you’re carrying the Glock 19 or any 9mm handgun for that matter, it is highly recommended that you load it with JHPs, as FMJs tend to overpenetrate because of the 9mm’s blistering speeds.

You don’t want over-penetrating bullets hitting innocent bystanders when you have to defend yourself against an armed attacker.

FMJs for the Glock 23 will be fine in most cases, but if you have the money, why settle for FMJs when you can buy even more effective JHPs?

Speer Gold Dots, Federal Hydra-shoks and Remington Golden Sabers are some of the best ammo choices that are available almost everywhere, but you can buy any JHPs as long as they’re from reputable companies, e.g., Winchester, Blazer, etc.

If you have any of these two pistols and you want to convert to a different caliber, feel free to do so, but be informed that you will be paying for half the parts of a complete handgun (you can use the same frame but you’ll need a new barrel, a new slide, a new trigger system, new magazines, etc.) and there might be fitting involved.

We would recommend to just buy the other gun if you want a dual caliber system instead of spending more $$$ for a conversion kit as it just doesn’t make any financial sense. But if you still want to explore your options, feel free to call Glock’s customer support. You’ve been warned.

If your Glock has feeding issues with JHPs (i.e. after firing the handgun, it ejects the case, and the next round in the magazine fails to feed in the barrel’s rear end) but it properly cycles with FMJs, you can try Federal’s Expanding Full Metal Jacket (EFMJ), Hornady’s Critical Defense or Corbon’s Pow’rball.

These bullets were designed to feed as reliably as traditional FMJs and expand to quickly incapacitate bad guys like JHPs. 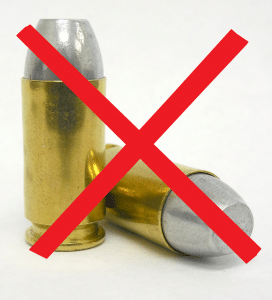 If you have any Glock handgun and JHP ammo in your area are too expensive that you have no other choice, buy only the jacketed ones (FMJs).

DON’T EVER buy cast lead bullets for your Glock. 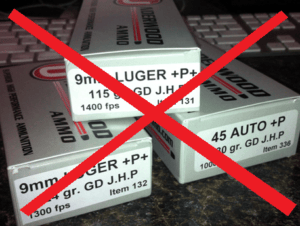 Some 9mm ammo are labeled +P+. These are not to be mistaken with those labeled +P.

To date, they have not set any specifications for a +P+ 9mm load.

I personally have never shot any +P+ rounds before, but just looking at available data online, the 9mm +P+ can get to around .357 SIG or 9×23 Winchester levels of ballistic performance. Sounds like a great idea, right?

Not really. All Glock pistol barrels are rated for +P ammo but not for +P+. Thus we can not recommend any +P+ ammo for use with any Glock pistol.

But you probably won’t listen anyway. If you’re so inclined to shoot +P+, at least get an all-steel 1911 chambered for 9mm. Here’s a list of the toughest 9mm 1911s on the market.

Nothing much can be said about pricing. Both handguns are priced exactly the same, info taken from Glock’s website. The Gen4 variant for each costs $549, while the Gen3 is considerably cheaper at $475 base price.

If you want to know why the Gen3s are cheaper than the Gen4s, you can find them here. If not, then feel free to jump to the Conclusion.

For the recoil-sensitive, we recommend the Glock 19 for the following reasons:

However, we cannot dismiss the merits of the Glock 23 for the following reasons:

You can’t go wrong with either the Glock 19 or the Glock 23. Both are superb choices for an everyday carry (EDC) piece and both were made by the same company known for their guns’ reliability.

Therefore, it is with great pride and a bit of dismay that we have to declare this showdown a draw. Furthermore, if you’re looking to buy one of these, or already own a model, you might want to check out this article about the best Glock 19 holster.