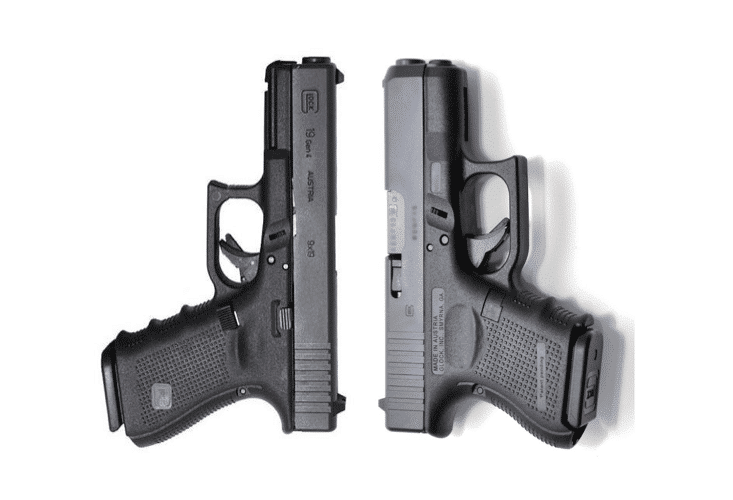 Oh dear. I just know that, 5 minutes after posting this review, I’m going to get some angry emails from people who disagree with me. Though other notable battles between compact pistols – think the Glock 43 vs. Shield – divide opinion, it seems that the most combative arguments are between people who disagree about which Glock is best.

Today, I’m going to take a look at both the Glock 19 and the 26, and compare them. Though both are great guns, there are some differences in terms of performance and size between these two guns that can have a big impact for individual shooters.

In my humble opinion – spoiler alert – the Glock 19 is the better weapon. I know that a lot of people prefer to carry the lighter 26, but for me the difference in weight between the two guns is not a huge problem. Instead, and since I’m a firm believer in carrying the biggest gun that suits the situation, the extra capacity of the 19 gives it the edge.

In addition, the Glock 19 is just about big enough to be pressed into service as a full-sized service pistol. This means that getting a Glock 19 essentially means you are getting two pistols for the price of one – a compact concealed weapon, but also one large enough to shoot accurately with.

Below, I’ll explain my thinking by comparing these guns in a number of key categories. First, though, a bit of history.

Until the release of the Glock 43 in 2005, the 26 was the smallest weapon they made. Designed to take advantage of the increasing popularity of concealed carry, the major focus of the design of the 26 was to make it as small as possible. Glock certainly achieved this, but also made the 26 capable of accepting magazines from larger pistols, simultaneously increasing ammunition capacity and grip length.

The Glock 19 has been around for years now, and was always envisaged to be a more adaptable gun. Large enough to be considered by law enforcement professionals as a serious back-up weapon, it is also slightly smaller than the Glock 19, and therefore more easily concealed.

But which is better, I here you ask?

Well, let’s find out, albeit with the following warning – the opinions here are my own, and of course no review can ever recommend the perfect gun for you. If you possibly can, fire both of these weapons, and see what works for you. Today, though, I’ll take you through the key points of difference, so that you can make your own mind up about the best gun for you.

Let’s start by having a look, in detail, at the most commonly argued about difference between these two guns – their size, and by extension how easy they are to conceal.

The Glock 26 is the smaller weapon. When it was released in 1995, it was Glock’s first entry in the then new category of sub-compact handguns. The barrel, in comparison to earlier Glocks, was made significantly shorter, and the grip drastically cut down to just a two-finger affair.

Theoretically, this makes the 26 far easier to conceal than the Glock 19. However, in reality concealment is quite a complicated business, and your ability to hide any pistol is more reliant on what kind of holster you use and what clothes you are wearing than it is on the size of the gun itself. The smaller 26 can be carried in a pocket holster, and if this is your preferred style of concealment than it is the sensible option here.

However, I also think that most people will not have a problem concealing the Glock 19. It is larger, certainly, but the barrel is still pretty short in comparison to other handguns. Get a good concealment holster, and wear clothes that don’t allow the gun to print, and you shouldn’t have a problem.

Once you recognize that the Glock 19 can also be concealed in most situations, it becomes by far the better gun. The performance offered by the 19 is higher than the 26 can ever achieve, and for this reason the 19 would be my choice.

In terms of price, there is not much to choose between these pistols. As Glocks, they are not cheap, but if you are relying on a pistol in a self-defense situation you don’t want to get the cheapest gun available anyway. Both of these guns can be picked up for under $500, which is actually a bargain considering the quality of these pistols.

If we have to compare, the 19 is actually slightly cheaper at the moment than its smaller cousin. Though you technically get “more” gun with 19, and therefore it represents the best value, in reality your choice of either the 19 or the 26 should be motivated more by the other factors I’m discussing here, and not the price.

With that in mind, let’s take a look at how these guns perform. We got brand new Glock 19s and 26s, went down the range, and fed them a variety of ammunition. Here are our thoughts on how they performed.

If you are used to shooting compact pistols, both of these weapons handle really well. Glock have built up quite a lot of experience making this kind of concealed-carry pistol, and so this should not come as a surprise.

The Glock 26, despite its shorter grip and super-compact design, actually feels pretty good. It points well, and some of us were really surprised by how solid it feels in your hand. If you haven’t used this kind of two-finger grip before, it’s going to take some getting used, but unless you have enormously large hands it will feel natural after a few trips to the range.

All that said, the Glock 19 is in a different league when it comes to handling. The extra finger on the grip makes all the difference to the way that this weapon feels. Not only does it give you extra control, but it also makes controlling the recoil of the weapon easier. And although the difference in weight between the two pistols – with the 19 weighing a bit more than the 26 – is noticeable when using them, in fact we preferred the extra heft of the 19.

Both of these weapons are very accurate for their type. All the usual warnings about accuracy apply here, in that your ability to hit a target is much more dependant on practice than the gun you are using. However, in our test both guns scored highly.

The Glock 19 won. Having looked through a mountain of technical data for this review, I do not think, however, that this is due to any variation in “mechanical” accuracy between these two weapons. On paper, at least, they perform about the same in this regard.

What made the difference was the extra control you get on the 19, due to the larger grip. In addition, it jumps around a lot less than the 26, especially in the hands of an experienced shooter. In terms of accuracy, then, I have to conclude that the 19 wins again.

Well, that to say? If you are used to shooting large pistols, the recoil on both of these weapons is likely to take you by surprise. Since both are relatively compact, they lack the weight necessary to soak up recoil, and the Glock 26 in particular jumps around a lot.

In terms of the differences between them, the 19 wins again. The tiny Glock 26 simply does not have enough weight to soak up recoil, and as a result putting powerful rounds through this weapon can be a real hassle unless you’ve been trained on how to control recoil.

This fact actually reveals a strange paradox about the Glock 26. In a lot of places, you’ll see it recommended as a good weapon for women, because it is smaller, lighter, and easier to carry than Glock’s full-sized pistols. While it may fit in a handbag more easily, in truth it is really not suitable for weaker shooters, because the recoil will make it very inaccurate. In short – easy to carry, hard to shoot.

Well, both of these guns are Glocks, and most of us know what that means when it comes to reliability. There are several reasons why Glock have won so many government contracts in Europe and elsewhere, and the reliability and ruggedness of their firearms is certainly one.

In our tests, both guns fired all the crappy ammunition we fed them with no problems. The actions remained smooth throughout, and I’ve got no hesitations in recommending either gun in terms of reliability.

Longer-term, both guns have been available for some time now, and both have got positive reviews from long-term users. The people we spoke to for this review praised, in particular, the Glock 19, which they said had given them many years of reliable service.

I see no reason, on the other hand, why the Glock 26 should perform any worse – both are built to the same extremely high standard.

Though there is a difference, this is still an impressive capacity for compact handguns. Compare the Glock 43 – with just 6 rounds in the mag as standard, easy to conceal – and you’ll see what I mean. Even the smaller 26 gives you 11 rounds, and if you can’t disable an attacker with that many bullets you need to practice more.

To my mind, having 15 or 10 rounds in the mag makes very little difference, especially as you are likely to be carrying an extra magazine anyway. I know, however, that some people like to have as much ammunition as possible ready to go, and in this case I would recommend the 19.

That said, it is just about possible to get the same capacity out of a 26. You can add after-market magazines which boost the mag capacity up to 15 rounds and beyond. For a lot of people, this is their reason to choose a 26 over a larger gun. The argument is that a 26 can “become” a larger weapon like the 19, but the 19 will never offer the concealment of a 26.

Finally, the ability to carry these pistols concealed. Again, in this area there appears to be a striking difference between the two guns. The shorter grip of the 26 means it prints less, and the fact that it is lighter could make it more comfortable to carry around.

If you live in a hot part of the country, I suppose these arguments are worthwhile. However, where I live I do not find it difficult to conceal a Glock 19. The trick is to get a decent holster, and wear the correct clothing. I cannot talk for everyone, of course, but to my mind you shouldn’t choose a gun just based on how easy it is to hide.

Of course, some people recommend getting both a 26 and a 19 – one for the summer, and one for the winter. If you have the cash, go for it!

So there you go. Both the Glock 19 and the 26 are great guns, and showcase what Glock can achieve in terms of compact and concealable firepower. Both are reasonably easy to use for experienced shooters, and both will give you many years of reliable service if you look after them.

If I have to choose, however, I would always go for the Glock 19. The extra ammunition capacity, the slightly larger grip, and the extra weight make this gun handle in a far superior way to its smaller rival. If you absolutely need to carry your weapon in deep concealment, go for the 26. Otherwise, get the Glock 19 every time.