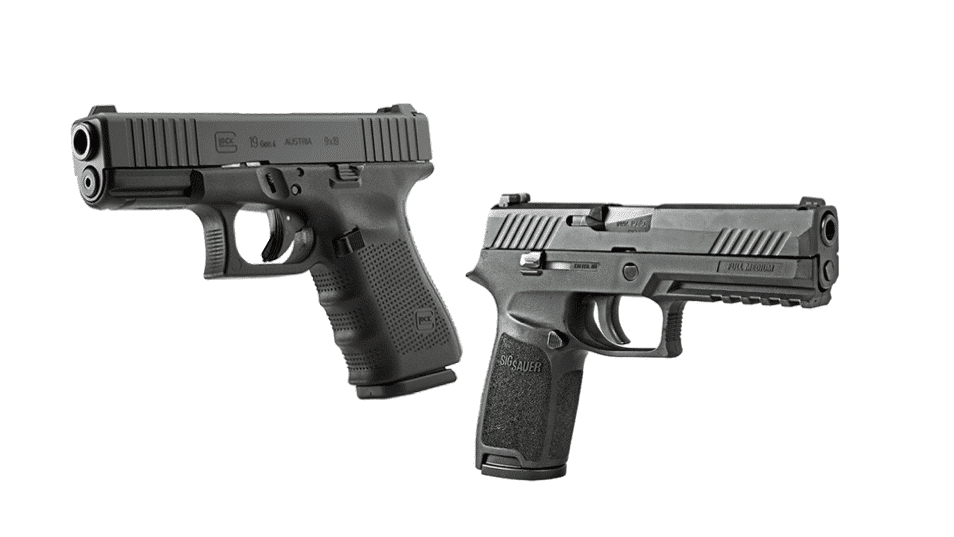 One of the most common questions we get asked here at GND is whether you should buy a Glock 19 or a Sig P320. Both are great guns, of course, as proven by their loyal followings, but there seems to be no real consensus on which is the best.

In some ways, the story of the Sig P320 is a strange one. When it was released, nobody really paid it any attention. It was just another 9mm handgun, much like the dozens of similar pistols that are released each year.

However, then the US Army decided to buy a load of these weapons for use by troops. This instantly thrust the gun into the limelight – what had the Army seen in the weapon that made it better than the good old Glock 19?

This was a good question, not least because the Glock 19 had ruled the roost for many years. The Austrian legend had built up an enviable reputation as a do-everything gun, small enough to conceal and yet large, powerful and accurate enough to see action as a full-sized service weapon.

The Sig P320 has to be really good to even stand a chance of being a replacement for the Glock 19, right?

Right. But the truth is that both of these weapons are actually pretty similar. The Sig P320 is also just about concealable, and also large and accurate enough to be a “do everything” pistol.

But which is better? Well, I suppose it depends what you are after. No review like this can ever recommend a pistol for everyone, because shooting is all about the feel of a gun in your hand, and not the boring old specifications of your weapon. Still, I’ll have shot at drawing out the differences between these two weapons.

Think about like this. The Glock 19 is basically the Honda Civic of handguns. It will run forever, shoot everything you give it, it never needs maintenance, and has a huge ammunition capacity. The P320 also has all that, but makes a few tweaks that might – might – make it more suitable for you.

Let’s take a look at both in more detail.

If you hadn’t heard anything about the Sig P320 before a couple of years ago, you were in good company. When it was released, it seemed like it was just another one of those 9mm pistols that come and go. Some people even said it was an inferior copy of the Glock 19.

Then the US Army decided to replace their standard sidearm – then the Beretta 92FS/M9 – with the Sig P320. Much like the 1911 before it, this instantly gave the P320 a huge amount of attention, because people wondered what the Army had seen in it that was so great.

Glock 19 fans, always a surly bunch anyway, were particularly annoyed that the Army had passed over Glock with barely a mention.

So what did the Army see in the P320? Well, by far the most commonly mentioned feature of the P320 that its proponents claim sets it apart from the Glock 19 is the ergonomics. I know that this is a deeply subjective factor, of course, but I have to agree.

The Sig fits in the hand and points as well as any other polymer striker pistol out there today. Perhaps better than them. Perhaps.

The trigger mechanism is also mentioned a lot. Though a lot of people have found that the trigger on the P320 requires some breaking in before it starts to work perfectly, once it gets going it really is a joy. This is doubly surprising because the trigger on the previous Sig gun, the P250, sucked.

Though the P320 is basically an updated version of the P250, Sig must have done some significant work on this aspect of the gun, because now it’s got a clean, smooth pull, a really crisp break, and a short reset.

But in essence, the barrel length, weight, height and width of the P320 and the Glock 19 are the same. In addition, both of these weapons have the same carrying capacity.

The huge difference between the Sig P320 and the Glock 19, though, is the modularity of the Sig. “Modularity” is one of those words that is in vogue at the moment, and for the majority of manufacturers and guns it seems to mean almost nothing, being just a fancy word to sell more pistols.

However, in the Sig P320 we might have found a gun that actually delivers what it promises.

The way it works is this. Almost all the major parts of the P320 can be taken out and swapped for different ones. The trigger group can be easily swapped between frames, and even between upper assemblies.

Equally, you can swap between slides and firing mechanisms in 9x19mm, .40 Smith and Wesson, and .357 Sig calibers. You can even, if you really want to, drop your trigger group into a .45 ACP frame and upper receiver, though this larger caliber requires a different frame also.

It goes further. You can swap between full-sized, compact, carry, and subcompact frames. And in terms of further customization, all of these frames come with a variety of rails.

The subcompacts’ rails are Sig’s own propriety models, which is both a strange and annoying choice, but on the other models the rails are straight Picatinny. The standard sights are P226 units, so they are also upgradeable.

All this is great, of course, if you are the Army. You can buy a load of different trigger groups, frames, and sights, and know that all are interchangeable between models. This makes the weapon super useful for military deployment.

However, the utility of this modular design for the average civilian shooter is questionable at best. How many people are actually going to invest in a load of different trigger groups to swap between frames?

Surely the majority of people will just buy the model that suits them best, and never change it. If you do that, you’ve basically got a gun which is almost identical to a Glock 19. So, without further ado, let’s reassess the classic pistol that the P320 claims to be a rival to. 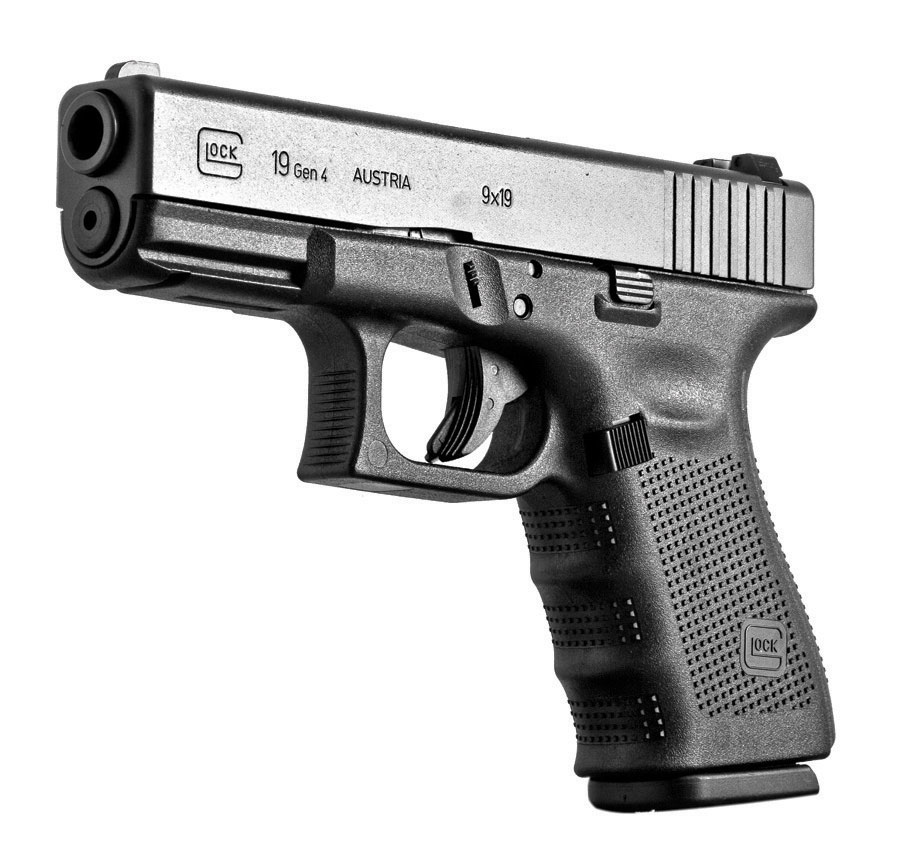 Ah, the Glock 19. Over the years I’ve written a lot about this classic weapon, and mostly gushed about the way this gun feels, handles, and shoots. The 19 has built up a huge following over the years, and it is clear that the Sig is going to have to be really good to even be in contention here.

OK, so let’s look at the differences between the Sig and the Glock. First up, the weight. Here, we have an instant difficulty – the Sig P320 is available in almost 10 different sizes, and not all of them are comparable to a Glock 19.

In fact, the full-sized Sig is more like the larger Glock 17, and the Subcompact model is more fairly compared to Glock’s offering in that area, the Glock 26.

So let’s be fair. The P320 Compact and the P320 Carry are about the same size as the Glock 17, and we’ll be looking at those guns. The Carry is 0.2 inches taller than the Compact, i.e. not much.

However, in exchange for this minor increase in size it can carry 2 more rounds of 9mm, or 1 extra round of .40 Smith and Wesson. The Compact, as I write this, is not available in .357 Sig, although I’ve heard that there are plans to do so.

One of the major reasons people like this gun so much is the carrying capacity, with 15 rounds in the mag and 1 in the chamber, giving you more than enough ammo for almost any situation.

Then we come to the mechanics of the Glock. The trigger is smooth and crisp, and features that famous bifurcated design. The pull is around 5.5 pounds for a gun that has been properly broken in.

This is a bit light, to my mind, for a weapon that a lot of people carry concealed, but on the other hand the Glock also comes with the Glock patented trigger safety mechanism, and this is highly regarded.

The trigger pull is a little harder than the Glock, coming in at about 6.5 pounds in a weapon that has been extensively used, and the trigger is also different in some other ways from the Glock.

For a start, it is not bifurcated or tabbed as standard. Instead, the firing block pin is deactivated when the trigger is pulled.That said, a tabbed trigger is available if you are used to using this system.

Lastly, one nice feature of the trigger mechanism on the Sig is that you don’t have to remove it to field-strip the gun, which I know is a feature that some people find annoying about other striker pistols.

If you’re thinking these guns sound pretty similar, you would be correct. The differences in size and weight between these guns is so small as to be almost unnoticeable to anyone but an expert user. Instead of obsessing about these factors, therefore, I’d recommend you look to the other factors I’ve mentioned.

So Which Should You Get?

Hmmm, now we come to deciding between the two weapons. Like I said, just basing your choice on the minor differences in size and weight between the two guns is not very sensible. Similarly, the other features of these two guns, being so similar to each other, make the choice super difficult.

Both have great striker triggers, and both are small enough to conceal whilst also being big enough to see use as proper, full-sized weapon. Both have a great ammunition capacity for their size, and both can be customized with whatever sights and other items you want.

Shooting the guns reveals some differences between them, but again nothing major. The Glock 19, as you already know, shoots great. The Sig is highly regarded for its accuracy, with many reporting that it shoots very straight right out of the box.

However, on the other hand, we noticed that the Sig had a tendency to do the same thing it’s predecessors did – kick the muzzle up quite hard on each shot.Whether this affects your accuracy will ultimately depend on how the gun feels in your hand. The ergonomics of the Sig are great, as is the trigger.

I know that some people find the aggressive rake of the grip on the Glock 19 a bit hard to get used to, and this might mean that you are actually less accurate with the 19 than with the P320. It really comes down to what you are used to.

Like I said above already, while the modularity of the Sig is nice for the military, I don’t think that many civilian users will actually make use of it. So I’ll discount that in my choice.

I would say, therefore, that your choice between these two guns should really come down to one thing – caliber. The fact is that the Glock 19 only comes in 9mm. While this will not be a huge problem for 9mm enthusiasts, those of us who like to carry some .45 sometimes will be attracted to the range of chambers you get on the P320.

The Sig can be ordered in 9mm, .40 Smith and Wesson, .357 Sig, and .45 ACP. And of course, the modular design means that you can swap between calibers using Sig’s Caliber X-Change Kit, which comes bundled with the P320.

So if you want more power than the 9mm Glock can offer, go for the Sig. If you still want to go for the Glock 19, you might be looking for a Glock holster.