While the SIG Sauer P320/M17 has been in the spotlight throughout the past year due to being chosen as the U.S military’s service pistol to replace the M9, another very similar SIG pistol has been very much overlooked: the SIG Sauer P250.

Basically, the P320 is the striker fired version of the P250, was is hammer fired and was originally introduced in 2007 before being discontinued by SIG in 2017. Used models of the P250 are still floating around in abundance and for lower price points than are usually commanded by SIG pistols, which means it’s still a viable option.

But still, why in the world would you want the P250, which isn’t even being made anymore, when the P320 is in full production and has been adopted as the U.S. military’s new sidearm.

We’ll try to answer that question in this article as dive into the features of the P250, its pros and cons, and a detailed comparison between the P250 and the P320.

Features of the SIG Sauer P250

The P250 is a hammer fired, locked brach, and short recoil operated pistol. 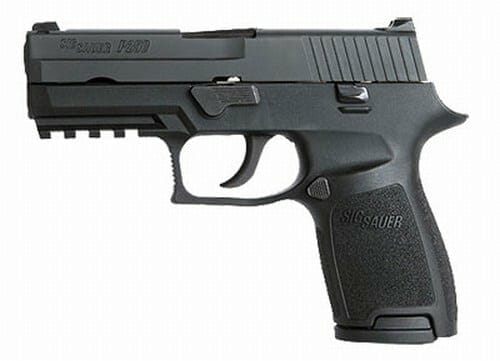 The main piece of the P250 is an internal fire control unit built out of stainless steel. It consists of each of the following components:

This fire control unit is utilized in every single P250 pistol regardless of size. It is inserted into the grip frame, and an axis pin holds it in place.

As the pistol is modular, you can transfer the fire control unit between the various grips sizes. This means you can literally convert your full sized P250 into a subcompact model in a matter of seconds. The P320 is modular in the same way.

Since the P250 is modular, this means you can interchange calibers with the same fire control unit.

You will need different slides, barrels, recoil assemblies, magazines, and grip modules depending on the calibers (9mm Luger, .357 SIG, .40 S&W), but the fire control unit can remain the same.

This was one of the big appeals of the P320, because even though they selected the 9mm version, they can use the same fire control unit for .40 S&W and .357 SIG versions of the same pistol.

The P250 is hammer fired and utilizes a DAO trigger system with a spurless hammer that is recessed into the slide. The pull weight of the trigger is around five and a half pounds as marketed by SIG, but it needs to be fully released until it is reset.

All in all a DAO hammer fired trigger is simply not going to be as light or crisp as a striker fired gun (it’s the big reason why the P320 displaced the P250).

The P250 was always a little less money than most comparable striker fired guns, and today on the used market it can be found used for the $350-$450 range. Since the pistol is no longer in production, it may increase in value several years down the road and therefore could be a good investment opportunity (who knows for sure either way).

The P250 is a truly modular pistol design just like the P320. You can convert your subcompact into a full size duty gun in just a matter of seconds, and the serial number on the fire control unit remains the same.

The disassembly lever makes the P250 extremely easy to field strip much like any other modern firearm.

You’re buying a SIG, so you know you’re getting a high quality product.

The trigger of the P250 is its major downfall and can be best compared to that of a double action revolver. While it is consistent, it is also neither crisp or nor as light as that of a striker fired pistol. Just something to be aware about. 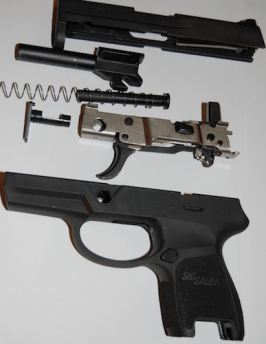 Lack of Aftermarket Accessories and Upgrades

Aftermarket accessories and upgrades for the P250 are rather scarce and you really are limited to what SIG has provided. For example, there’s no aftermarket trigger.

Sights and holsters are easy to find (it is compatible with P320 holsters and sights) but other accessories and upgrades not so much. This is the direct opposite of other handguns such as the 1911 or the Glock of the S&W M&P.

While the P250 itself may not be an expensive gun, the same cannot unfortunately be said about its spare parts (holsters, exchange kits, magazines, and so on). Each will command a premium price mainly for the sole fact that the P250 is a SIG product.

Now that we’ve talked about the SIG Sauer P250 in detail, let’s compare it to the P320.

If you’re on the market for a SIG Sauer pistol and if you don’t want a DA/SA pistol like the P220 series, you basically are limited to the P320 and P250.

Now even though the P250 is no longer in production, used models in great condition are still plentiful on the market and are commonly available for less than $500. That may not stay that way forever if the value of them goes up several years down the road. So that’s one argument to get the P250 over the P320.

Almost every feature of the P320 is installed on the P250. As was noted previously, the primary differences between the two are that the P320 is striker fired and the P250 is DAO hammer fired. The two guns use the same magazines, have the same polymer frame (full size, compact, and subcompact) and rails, and lack a manual safety (with the exception of the M17 variant of the P320).

Both pistols are also fully modular. As we discussed previously as well, you can swap the fire control unit in between frames.

And when you look at the two guns side by side, the P320 and P250 basically look like the same gun.

But for all their similarities, the two guns are not identical. The slide on the P250 is actually just a tad narrower than that of the P320 on the full size and compact versions (around 0.1 inches).

Furthermore, there is no slide for the P250 that will accept an RMR optic, whereas there are many slides for the P320 that will do so.

You will also notice a huge difference when you fire the two weapons. Though the factory triggers of both pistols are set at 5.5 pounds, being a DAO pistol means the P250’s trigger needs to cock the pistol in order to fire it.

In other words, the P250’s trigger will feel much longer than the trigger on the P320, and it’s for this reason that the P320 became much more popular than the P250 ever did.

So, the big question: should you buy a SIG Sauer P250?

Honestly, the P320 has everything that the P250 has and then a little more, including a nicer trigger and the ability to mount RMR optics.