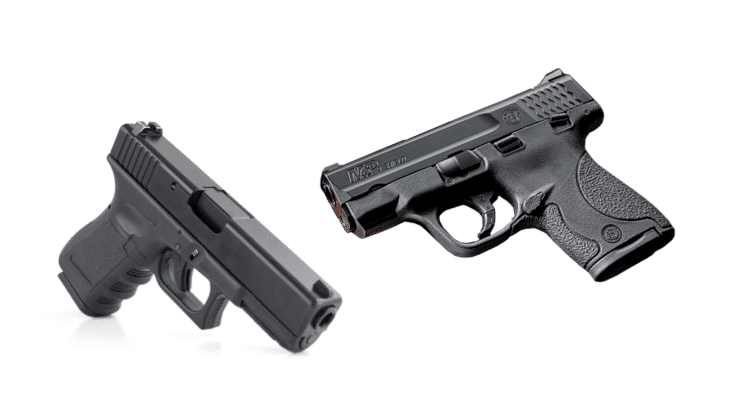 Nothing splits CCW enthusiasts like the debate over the Glock 43 vs. the M&P Shield. I just know that, after posting this review, I’m going to get a lot of angry emails from the proponents of both, arguing angrily about why their choice is the best.

Before we begin, though, a bit of history. The Shield is the older weapon, released back in 2005. Smith and Wesson designed this pistol to appeal to the then-growing popularity of concealed carry, and the idea was to make a pistol that combined the newest features in handgun design with a slimline, compact frame that could be carried and concealed easily. The Shield is available in both 9mm and .40 calibers, and makes use of a polymer frame to keep the weight down.

The Shield was the CCW of choice for many people for many years. However, the Glock 43, released in March 2015, complicated this slightly. In the press release that accompanied the release of this pistol, Glock made much out of its advanced design, saying that it set a new standard for concealed carry pistols. Some were sceptical. The Glock 43 is smaller than the Shield, though not by much, and many Shield enthusiasts were unwilling to even try the new pistol.

Today, opinion is divided. Though the specifications of the two pistols are pretty similar on paper, we all know that half an inch here or there, or an extra few ounces, can make all the difference when you are actually using a pistol, and especially so if you find yourself in a dangerous situation.

But which is better, you ask? Well, I’ll start with the standard warning that no one review can ever recommend a pistol for everyone. Which gun you ultimately prefer will depend on a vast variety of factors, from your shooting style to where you live. Today, though, I’ll take you through the key points of difference, so that you can make your own mind up about the best gun for you.

OK, so let’s cut to the most important difference between the two guns. The Glock 43 is smaller, the Shield carries more ammunition as standard. It may seem, therefore, that you just need to work out which is more important to you, and choose accordingly. In reality, unfortunately, it’s not that easy.

This is because, though Glock make a big thing out of it, the difference in size between the two weapons is actually pretty minimal. The Glock is slightly narrower than the Shield by a tiny – some would say unnoticeable – 2mm. However, the Shield is actually 4mm shorter than the Glock overall, and has a barrel that is 7mm shorter. If those sound like tiny differences, they are. Without sitting down and actually measuring the pistols, they appear to be basically the same size.

Glock claim that the shorter magazine of the 43 means that it is easier to carry. Shield fans point out that most people want more than 6 rounds in the magazine. The Glock fans retort that extended magazines are available for the 43. This is true, but here’s the thing – if you add even just the baseplate to a 43, it is almost exactly the same size as a Shield.

And so, although this trade-off between ammunition capacity and size is the most discussed difference between the guns, in reality I think we can say that they are actually pretty similar in this area. Let’s move on to some other comparisons.

In terms of the price of each gun, the Shield just about wins. Again, though, the difference in this area is actually pretty minimal.

There is now more competition in the handgun market than ever before, and one advantage of this is that the cost of most CCW has dropped. These two guns are direct competitors to each other, and it is therefore not surprising that both retail for around the same price. Both cost less than $500, and both come with multiple magazines as standard.

The Shield is cheaper, but only by $50 or so. Given the similarity of the guns, this is surprising. However, I think this difference in price merely points to the fact that the Shield has been around for longer, and is a more common gun, than the Glock 43, which in some places still has the advantage of novelty.

If you’re looking to save $50, go for the Shield, but I think for most people the difference in price between these two weapons will be pretty unimportant.

Well, the gun that is right for you will depend on your own needs. However, in order to help you we took both weapons down to the range for testing. Here are our thoughts on how they performed.

Both guns handle pretty well if you are used to shooting this kind of compact pistol. The 43 is 3 ounces lighter, which is enough to feel when you pick it up, but doesn’t make so much difference when you are carrying it.

When handling the standard versions of these guns, without the extended baseplates, the most obvious difference is the Glock’s slightly shorter handle. If you are particularly large, or are not so used to firing this kind of compact pistol, this can make a difference, because the lower part of your hand will hang over the grip of the gun. With a bit of practice, this should not be too much of a problem, but at first it can make the Glock a little uncomfortable to handle.

On the other hand, the smaller grip on the Glock can actually be advantageous for some people. If you are looking for a CCW for your wife or S.O., for instance, the Glock might be easier to conceal and handle for her, owing to any number of equally lightweight holsters.

We’re going to get into trouble with this one. The guys over at Arnzen Arms pride themselves on their procedure for testing the accuracy of pistols, and they claim that the Shield is the more accurate gun. Whilst this might be true in terms of mechanical accuracy, when we tested these two guns we actually found the opposite – that the 43 was more accurate.

That said, the difference was slight, and both of these guns were impressively on-target. With this kind of compact pistol, of course, you are not going to be taking shots out to 400 feet, but at 40 feet both performed well. If you can’t hit a target at this range with either weapon, the fault lies with your technique rather than the guns.

To my mind, the Glock 43 just about wins this category.

Well, that to say? If you are used to shooting larger pistols, the recoil on both of these weapons is likely to surprise you. Since both are compact, they lack the weight necessary to soak up recoil, and both jump around a fair amount when firing.

This is especially true if you are using powerful ammunition. A curious feature about compact pistols like this, and a nice one in some ways, is that you can actually feel the difference between premium, high-velocity ammunition and the cheap stuff.

In our tests, we found that the Shield gave a little bit less recoil, and allowed us to get back on target quicker. Felt recoil is a very subjective thing, of course, and it might just be that the longer grip of the Shield just made it feel like it kicked less. Still, I think in terms of recoil the Shield wins.

Well, one of these guns is a Glock, and you know what that means. The Glock 43 went through all the junk ammunition we fed it, and didn’t jam once. This is especially impressive for a weapon of this size. The Shield jammed once, towards the end of our testing. While we wouldn’t say that this scientifically proves it is less reliable, it is a cause for concern.

In terms of longer-term reliability, however, the Shield has the advantage of already having been around for years. Shield owners we talked to for this review reported that their Shield had never jammed, after thousands of rounds, and we believe them.

In truth, though, I think we have to call this category a tie. The Shield has already proven itself capable of giving many years of reliable service, but we see no reason why the 43 will not be just as reliable as other Glocks.

As I said above, this is one area in which there is a real, measurable difference between the guns. Some might find the 6+1 capacity of the 43 just a little on the stingy side for this kind of weapon, and prefer the extra round that the Shield gives them.

However, let’s have a think about this in detail. In most self-defense situations, you are going to be engaging an attacker at very close range. In fact, the most common place for a civilian to be attacked is when getting into your car.

In this situation, you’ll be holding back the attacker with one arm and shooting with the other. You will hit them with every round you fire, or at least you should.

At this range, the extra round makes very little difference. If you can’t take down an attacker with 7 bullets, you are not going to be able to with 8.

In addition, if you are worried about situations in which you have to incapacitate more than one attacker, you really need to be carrying extra magazines.

I would say, in terms of this category, that the Shield wins, but not by much.

Finally, the ability to carry these pistols concealed. This, like the ammunition capacity, is an area in which there is a measurable difference between the pistols. The 43 is slightly smaller than the Shield as standard, but only in the grip. This can make a difference in terms of printing in a IWB or OWB holster, but only if you are wearing light clothing.

There is a difference, however. The slightly shorter grip means that the 43 is just about small enough to be used as a pocket gun. Though the relatively light trigger pull on Glocks means that I would never recommend just sticking it in your pocket, with a good pocket holster it works well in this configuration.

Though both guns are relatively easy to conceal, if you prefer to carry your CCW in a pocket holster, go for the Glock.

So there you go. Both the Glock 43 and the Shield are great guns, and it is unlikely that the battle between them is going to be conclusively settled anytime soon.

Both are easy to conceal, and easy to shoot. Both are pretty accurate for this type of pistol, as long as you put in the practice and get familiar with them. Both are reliable guns, though the Shield has the advantage of having been field tested for quite a number of years now.

Despite all the arguments over ammo capacity and size, my advice would actually be to go for the Shield. Unless you absolutely need deep concealment, or are particularly small, in my opinion the Shield simply offers a more comfortable shooting experience. And you also get an extra bullet.