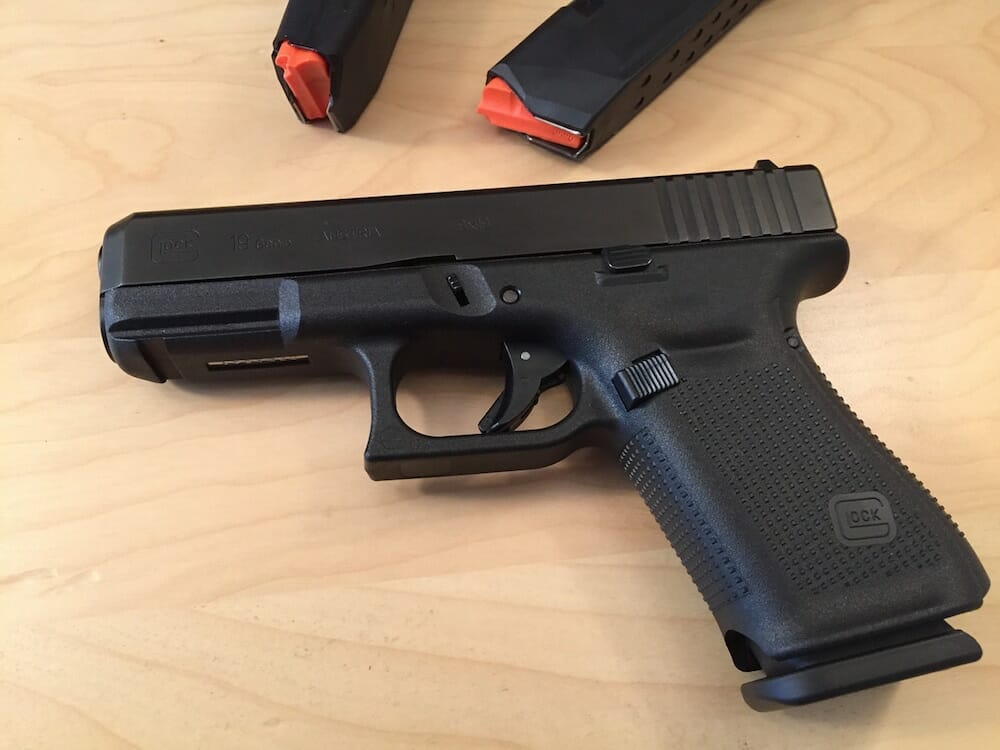 You may have though that the Glock Generation 4 represented the pinnacle of everything that Glock could do, but the Generation 5 that was released last year shows that Glock still has many tricks left up their sleeve.

But the truth is that some of the changes from the Gen 4 to the Gen 5 are significant. On the outside, the two guns look almost identical, with a few aesthetic changes, particularly concerning the grip and the magazine. But there are a lot of other changes as well.

In other words, it’s safe to say that the Generation 5 is a new gun of its own. According to Glock, there are exactly thirty five upgrades with the Generation 5. We’ll go over the most significant of those changes now.

One of the major negatives of Glock pistols in general has been the fact that the factory shipped them with polymer sights, forcing the buyer to have to upgrade the sights themselves if they wanted to. 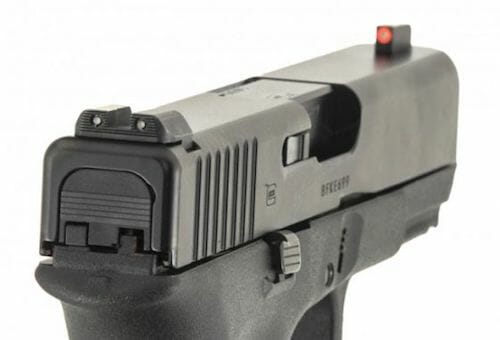 Glock has remedied this problem by improving the sights on the Generation 5 versions. Glock Gen 5 pistols are now shipping with Ameriglo Glock Spartan Operator Night Sights. Not only are they more durable than the previous polymer sights, they are a far better choice for night shooting as well. However, you might want to check out our review of the best Glock sights, and purchase a separate model.

The front end of the slide of the Glock Gen 5 is now rounded off. This is partly for aesthetics, but it’s also supposed to make it easier to perform a press check from the front of the slide. Though granted, front slide serrations probably would have been a better upgrade for that purpose. 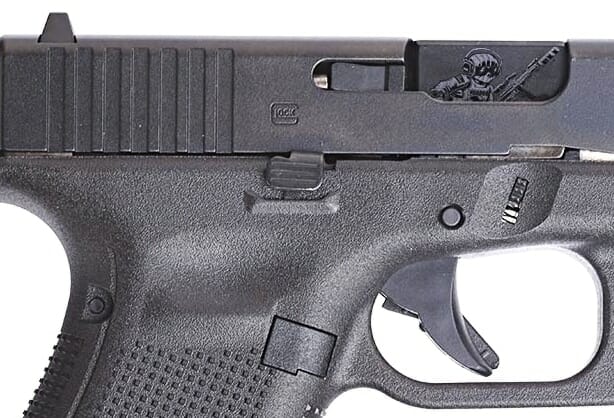 Another previous flaw with the Glock pistols was the lack of an ambidextrous slide stop to accommodate left handed shooters. Shooters who were left handed would have to spend their own money to upgrade their pistols to accommodate them, but this is no longer the case as there is a slide stop on both ends of the pistol.

As with the previous slide stop, the slide stops on the Gen 5 are very minimal and unobtrusive.

Some of the most significant changes with the Glock Gen 5 concern the magazine. Glock designed the Gen 5 to make it easier to reload. To this end, it features a reversible magazine release button to work with both right handed and left handed shooters. 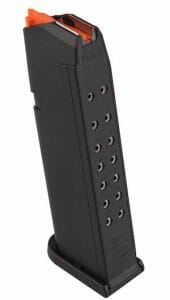 Furthermore, Glock also bevelled and flared the magazine to make it easier to strip out an empty magazine and load in a fresh one.

Meanwhile, Glock has also extended the floor plate on the magazines of the Gen 5 and given them an orange follower to serve as a clear visual representation to the shooter that the gun is empty when the slide is locked empty.

There’s no reason to worry about this slight change concerning the magazines however, as all Glock magazines remain compatible with one another. The only real exception to this is the Glock 19X, which will not accept any Gen 5 magazines due to the extended floor plate. 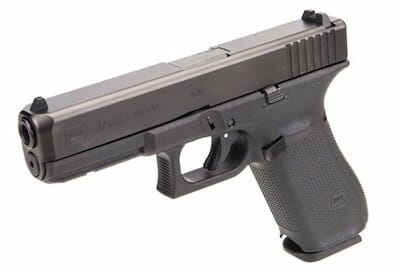 Previously, Glock finished their pistols with a Tenifer finish, which is extremely wear, rust, and corrosion resistant against moisture and water. Other popular pistols also employ the Tenifer finish, such as the Walther PPQ.

That being said, Glock has upped the ante by now finishing all of their pistols with a nDLC finish, that is designed to be even more weather and corrosion resistant than the Tenifer finish.

Glock Gen 5 pistols come installed with the GMB, or Glock Marksman Barrel. Glock claims that this barrel has improved rifling, which naturally lends itself to greater accuracy.

Glock also claims that the GMB has better tolerances than previous Glock factory barrels as well. 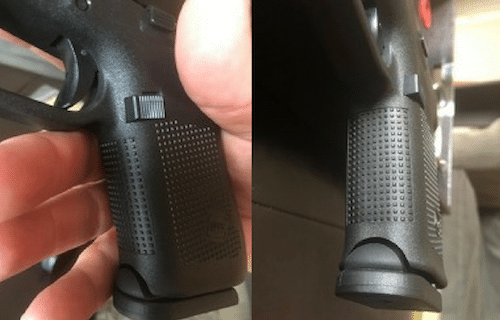 One of the clearest aesthetic changes to the Glock Gen 5 is the lack of the finger grooves on the front part of the grip. This was Glock’s response to numerous complaints that they had received on the Gen 3 and Gen 4 models.

Yes, this will irritate people who preferred the finger grooves, but it will certainly make those who didn’t like the grooves at all very happy.

Glock has kept the interchangeable back straps of the Gen 4 in with the Gen 5. The stippling on the sides of the grip also remain aggressive.

Alright, so those are the main changes/upgrades/features of the Glock Generation 5 in contrast to the previous models.

Still, there are also a number of smaller changes or features as well that we will now cover here.

One feature worth of note isthe dual recoil spring system. Glock originally featured this on the Glock Generation 4 for improved performance, and they have chosen to keep it on the Gen 5 as well. 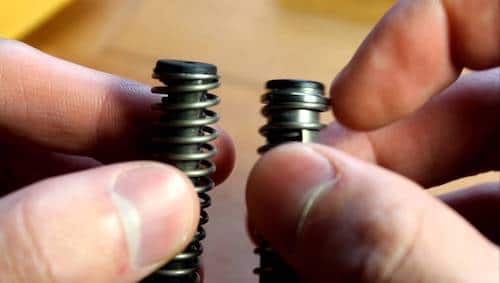 That being said, Glock has also removed the locking block pin of the Gen 4, instead replacing it with the two pin system that was previous in the Gen 1, 2, and 3. The reason for this switch back to the old style was because there would be fewer moving parts in the gun, and thus lesser chances of a failure (even if it’s only minimal).

Is the Glock Gen 5 better than previous generations? It’s not that it’s better, or worse, it’s just that it’s different. Glock kept some features of the Gen 4, transitioned back to some of the other features of the previous models, or added completely new features entirely. The dimensions remain largely the same, meaning you could check this guide to find out what the best Glock 43 holster is if you’re looking for one.

In summary, the changes and features of the Glock Gen 5 are:

Now regardless of what you personally think of the Glock Gen 5, one thing is undeniable: it is the future of Glock, at least for the time being.

And that will leave the Generation 5, which will represent the mainstay of Glock’s armory, until at least the Generation 6 comes out a few years down the road.

Because remember, a lot of the changes that were made to the Generation 5 were made as a result of customer feedback. So if you’d like to send feedback to Glock to communicate what you would like to see on a Generation 6, now is the time.