The AR-15 is loved by millions of Americans and shooters across the country. It’s one of the most-sold firearms currently in production. It also has a political rap sheet, having captured some bad press by too many legislators.

With ever-growing state restrictions and calls for new federal bans getting louder, it’s no wonder more shooters are choosing to build their AR-15s unregistered, using an 80% lower.

So, what exactly is an 80 percent lower? In the eyes of the Bureau of Alcohol, Tobacco, and Firearms
(ATF), it’s a receiver blank. A receiver blank is a piece of metal or polymer that roughly resembles the shape of a firearm receiver but isn’t considered one yet, because it’s not functional.

The black hats at the ATF spell out what separates a receiver blank (not a firearm) from an AR-15 stripped receiver, a firearm by definition. 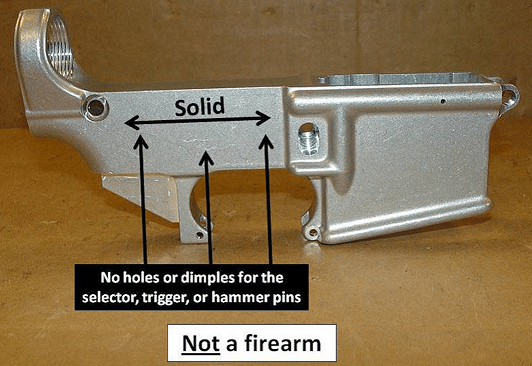 This photo, taken from the ATF, illustrates how they classify a receiver blank. Note the missing pin holes for the lower parts kit. It is not functional in any way.

This receiver blank has no fire control cavity, the area where you’d install your trigger and parts kit. You, the builder, are responsible for fabricating the receiver with hand tools.

Yes, it’s Legal to Build a Gun at Home

The Gun Control Act of 1968 has long held that it’s perfectly legal to build your own gun at home with no license or other paperwork required:

The law prohibits a person from assembling a non–sporting semiautomatic rifle or shotgun from 10 or more imported parts, as well as firearms that cannot be detected by metal detectors or x–ray machines. In addition, the making of an NFA firearm requires a tax payment and advance approval by ATF.” – ATF, November 6 2017

To be sure, this is not the same as purchasing a stripped receiver from a gun store or FFL. The law says you can fabricate your own firearm from raw material.

And doing so has some unique benefits.

A receiver blank is not legally considered a firearm at the time of purchase. Until you complete your receiver with an 80 lower jig, it’s just a hunk of aluminum. This is good news for the shooter who wants to keep their weapons off the government’s books:

*Unless you live in California or other restrictive states. Do your homework first.

Build kits like this are popular because they can be bought and shipped directly to you. Since there is no firearm receiver in the kit (only a receiver blank), you don’t need to deal with an FFL to purchase.

Starting to see the advantages?

Getting from 80% to a Firearm

The 80% lower gets its name not from the ATF or any legislation, but from manufacturers. There are various receiver blanks available for rifles and handguns (like the Glock), but the AR-15’s blanks get their name aptly so: They’re roughly 80% complete.

These blanks have most of the complex work done: The buffer tube housing and detent are drilled and threaded, the bolt catch and magazine catch/release are fabricated, the takedown pin holes are already drilled, the trigger housing is set up, and the magazine well is complete.

You must perform the following machining steps:

The only difference between a black rifle (or pistol) built with a receiver blank and a store-bought gun is the origin of the receiver itself. Any finished 80% lower receiver will sport the same physical internal dimensions and fittings as a receiver made by a big-name gunmaker.

That means you’re not restricted to buying specialty parts or proprietary trigger kits, barrels, and the like. Once your blank is machined, you can build virtually any AR-15 using any parts you’ll find on the market or in store.

The 80% market has receiver blanks for every store-bought AR platform or receiver you could otherwise buy through an FFL. Forged and billet 80% lowers are most common, though polymer units are available for ultra-light builds.

We wrote a guide that details how AR-15 receivers are made. We also compare their materials, including forget and billet. This guide should help you pick out the appropriate receiver blank for your own build.

With how flooded the AR-15 market has become over the last few years – and with all the gun control scares – there are stripped receivers now available for as little as $60. These are complete units ready for a build. Some builders ask if this gunsmithing project is even worth it.

Is it worth it?

Investing in an 80% lower requires buying some hand tools: You’ll need to invest in at least a handheld router and hand drill, as well as a jig. Total initial investment comes out to around $300:

There are added costs if you decide to purchase a stripped receiver instead:

We see how expensive buying a stripped receiver becomes with those added costs – around $200 or more in some states.

But with your initial investment for an 80% lower covered, building more AR-15s becomes incredibly inexpensive. You can simply purchase another receiver blank, throw it in the jig, do some work, and you’ve got a second firearm to build for well under $100.

You also don’t need to pay any fees for a background check, there are no extra taxes to pay, there’s no waiting period, and there is no paperwork to deal with at the Federal level.

The initial investment is high, but owning the tooling offers an affordable alternative to buying stripped receivers – and paying background check fees and taxes – over and over.