The Smith & Wesson Military and Police (M&P) line has been in continuous production since 1899 when they released their .38 M&P revolver. While most people imagine the pistol we’re going to talk about today when they think about ‘Smith & Wesson M&P,’ the truth is that the M&P line is an entire series of firearms that includes rifles, pistols, and revolvers.

Today, however, we’re going to focus specifically on the Smith & Wesson M&P handgun in 9mm, a pistol which has proven itself to be one of the most popular pistols on the market and in 2017 was updated with a second generation, or 2.0, model.

We’ll discuss how the M&P was developed (as it was several years in the making) and then what makes it a viable alternative to the Glock.

How Was The M&P Developed?

As was noted above, the M&P was a pistol many years in the making when it was first introduced in 2005.

Smith & Wesson’s original series of semi-automatic handguns were the 1st Generation, 2nd Generation, and 3rd Generation DA/SA metal-framed pistols, such as the famous 5906.

Those guns were exceptionally well-made and enormously popular with civilians and law enforcements alike, but they were also heavy compared to lighter polymer framed pistols such as the Glock.

In fact, the Glock had gained such a sizable share of the pistol market in such a short amount of time that by the early 1990s Smith & Wesson realized they would have to compete.

Long story short, Smith & Wesson’s answer to the Glock was the Sigma pistol, but it was routinely criticized as being an inferior gun in terms of overall quality and Glock even sued Smith & Wesson due to the Sigma’s incredibly similarity.

Even though the Sigma may have been an embarrassment for Smith & Wesson, they didn’t let it stop them from competing Glock.

Smith & Wesson worked on developing a new pistol that combined elements of the Sigma with the Smith & Wesson SW99 (essentially a clone of the Walther P99) with some new features entirely.

The result was the Smith & Wesson M&P pistol, and in the 13 years of its existence as of the time of this writing, it has established itself as Glock’s primary competitor.

Features of the M&P

The Smith & Wesson M&P9 is a striker-fired, semi-automatic pistol with a 17+1 standard capacity.

The frame is built out of Zytel polymer with a stainless steel chassis for extra support. The back straps are removable and can be swapped out with the small, medium, and large sizes.

The slide is machined out of stainless steel and then coated in a blackened nitride finish called Melonite, which makes the pistol very rust and corrosion resistant.

The M&P also features a low bore axis, which reduces muzzle flip and allows for faster follow up shots.

Smith & Wesson markets the M&P as having a trigger pull weight of six and a half pounds. This stands in stark contrast to the much heavier twelve or so pounds that the Sigmas had.

There are numerous safety features on the M&P. Some have a manual thumb safety (most don’t), while all have a loaded chamber indicator and a Glock-style safety on the trigger that must be pulled for the trigger to be pulled as well.

The M&P utilizes a three dot sight system with steel sights, which stands in stark contrast to the polymer sights used on many of its competitors including Glock. The sights can be adjusted horizontally to account for windage.

Finally, a Picatinny rail on the frame of the M&P under the slide allows the user to mount lasers, tactical lights, or whatever else they see fit. 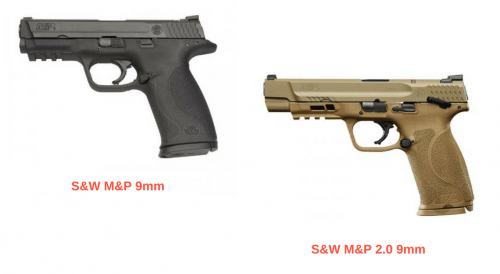 In 2017, Smith & Wesson released the M&P 2.0 model, which is essentially the second generation version of the gun.

The M&P 2.0 makes several upgrades over the original model of the M&P. One of the most notable of these is the grip texture, which is stippled much more aggressively to give the shooter a more secure grip in wet conditions. Some people have complained that this is not really an upgrade, since it’s hardly comfortable when pressed against your skin during IWB carry.

Another change on the 2.0 is the lack of a beavertail on the rear of the frame, which allows the shooter to get a slightly higher grip to reduce muzzle flip.

Smith & Wesson also claims the 2.0 is slightly more reliable than the original M&P, because the stainless steel chassis in the frame has been enlarged and now travels to the rear of the dust cover. This reduces the amount of stress on the frame when the weapon is discharged, and also reduces the possibility of malfunctions (especially when a light is attached to the rail).

Another major improvement of the 2.0 over the original is the trigger, which is now much crisper and has a more audible reset. Smith & Wesson claims the original M&P’s trigger is six and a half pounds, while the claim the trigger of the 2.0 is six even.

Is the M&P The Best Glock Alternative?

First of all, what do we mean exactly by ‘Glock alternative’?

There are a host of such pistols on the market that fit that criteria. You can take your pick from the Walther PPQ to the HK VP9 to the Canik TP9 to the Beretta APX to the Springfield XD to the SIG Sauer P320 and so on.

But what makes the Smith & Wesson M&P the best Glock alternative? After all, it’s not like the M&P is any more (or any less) reliable than the other options that were mentioned above, since all of them

While the term ‘best Glock alternative’ is definitely subjective, there are still many arguments that can be brought up in making the M&P your first choice for a polymer framed striker fired pistol that’s not a Glock.

One argument in favor of the M&P is quite simple: greater aftermarkets support.

While there’s no question that Glock commands the largest aftermarket support of any pistol on the market today, other than the 1911, the M&P definitely has a stronger aftermarket support than other competitors such as the PPQ, VP9, P320, and so on.

What this means is that spare parts, holsters, triggers, sights, and other things you can use to customize your pistol are in greater abundance and variety with the M&P line.

In fact, while Glock still commands the polymer framed pistol market, the M&P is without question the runner-up in terms of popularity.

Alright, so the M&P has strong aftermarket support. But does that fact alone make it the best Glock alternative?

Honestly, whether you believe the M&P is the best Glock alternative is your opinion. As we just talked about, almost all of the Glock’s primary competitors (M&P, PPQ, TP9, P320, XD, etc.) are reliable and dependable firearms. It isn’t that the M&P is more so.

It’s just that the M&P has established itself as one of the largest players on the pistol market and has built up a considerable reputation much like Glock has. In other words, if there’s any Glock alternative that will never be going away in the foreseeable future, it’s the M&P.

In conclusion, the M&P9/M&P9 2.0 is one of the most solid offerings for a 9mm pistol available today. It is available in several different variants as well including 5-inch target models, the M&P 2.0 Compact that’s closer in size to the Glock 19, and the slimmed down Shield.

For home defense, for casual target shooting, for concealed carry, for an SHTF sidearm, for tactical training, and so on, the M&P line has proven itself to be an excellent option.