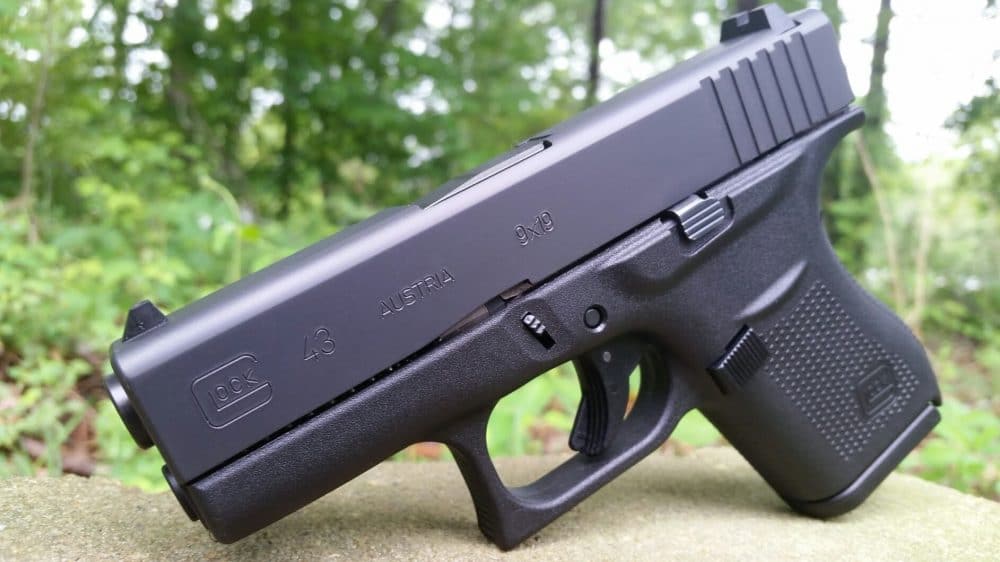 Was there ever a more anticipated product in the Glock lineup than the Glock 43? Probably not.

When the Glock 42 .380 ACP was released, it certainly pleased many people, but at the same time, others strongly felt that it should have been chambered for the more powerful 9mm round. After all, Glock had never released a single stack 9mm up until that point, and if you wanted a 9mm Glock for concealed carry your best options really were limited to the Glock 19 and 26, both of which are bulkier due to their double stacked magazine designs.

But in 2015, Glock listened and released the G43 in 9mm, and the gun has proven to be a raging success for them and one of the most popular concealed carry guns of any kind on the market.

Three years later, how does the Glock 43 stand up? In the upcoming sections we’ll discuss the advantages of the single stack 9mm to begin with, what makes the G43 worth buying, compare it to some other models, and then go over some basic specs on the gun.

Advantages of the Single Stack 9mm

Most people are simply not comfortable with carrying a full size or even a mid-sized pistol such as the Glock 17 or 19. It’s not that they can’t shoot the guns well, it’s just that they aren’t that comfortable to conceal carry inside the waistband for most people.

For many, many years, your deep concealment options were really limited to the .380 pocket pistol or the .38 snub nose revolver, assuming you didn’t want to carry something larger.

But that really changed in 2007 when Walther released the PPS, a single stack 9mm striker fired and polymer framed semi-automatic pistol with a 6-8 round capacity depending on the magazine.

More single stack 9s, followed, from the Springfield XDS-9 to the Smith & Wesson M&P9 Shield to the Beretta Nano to the SIG Sauer P290 to the Taurus PT709 to the Ruger LC9.

So really, the Glock 43 wasn’t anything particularly special or revolutionary. Glock capitalized on the success of the 9mm single stack and essentially shrunk down their full size models in terms of width and height to make the 43. Because of its specific dimensions, you might want to learn what the best Glock 43 holster is.

But what makes the single stack 9mm in general such a good choice for concealed carry, regardless of the make or model that you choose?

Well, there are several reasons why.

Remember, before the single stack 9mm, your other deep concealment options were really limited to .38 snubnose revolvers (i.e. S&W J-frame revolvers) and .380 autos such as the Bersa Thunder, Walther PPK, or the Kel-Tec P-3AT (and later the Ruger LCP or S&W Bodyguard). 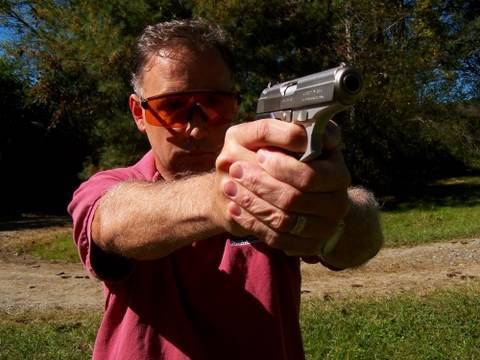 The .38 snubnose revolver is a dependable firearm, easy to conceal, and it has undoubtedly saved thousands of lives. But it’s also notoriously difficult to shoot thanks to a long trigger pull and high recoil, it’s rather wide due to being a revolver, reloading times are slow, and capacity is limited to just 5 rounds.

.380 pistols, whether they be larger models such as the Bersa Thunder or pocket sized autos such as the Kel-Tec, may have faster reloading times than revolvers but many regard the .380 ACP round as being a little too underpowered for self-defense. Plus, .380 guns in general often have a reputation for being finicky with ammo (though some models are certainly more reliable than others), and the pocket sized models in particular are very snappy with gritty trigger pulls.

The 9mm single stack was designed to solve these problems. While still being smaller than a full or mid-sized duty gun, it’s thinner and faster to reload than the .38 revolver, more powerful and easier to shoot than either the .380 or .38, and will have a capacity of anywhere from 6 to 9 rounds.

So really, it’s easy to see why the 9mm single stack has skyrocketed in popularity to the point that it is today the most popular category of concealed carry handguns on the market.

But what makes the Glock 43 so special among the various other 9mm single stacks that are out there? Well…

What Makes The Glock 43 Worth Owning?

First of all, the Glock 43 is not the only high quality or reliable 9mm single stack on the market. Other offerings such as the S&W Shield or the Walther PPS have certainly proven themselves to be reliable pistols over the years, and many people depend their lives on them.

But the Glock has something that the other brands really don’t: track record. Glock has been producing their line-up since the 1980s. In contrast, the PPS has been out since just 2007 and the S&W M&P line since 2005 (and the other offerings are from that same time frame as well).

In other words, Glock has built an almost impenetrable reputation. Even people who are new to guns and are looking for their first concealed carry pistol have most likely heard of Glock’s stellar reputation.

And there can be no question that the Glock 43 has continued to live up to the high standards that the company has set. The Glock 43 is an incredibly reliable firearm, and in my own experiences with the gun, I have experienced absolutely no malfunctions of any kind. Not surprisingly, the ecosystem of G43 holsters and other accessories is second to none in the Glock lineup.

While capacity is limited to just 6+1 rounds with the standard factory magazine, multiple aftermarket magazines are available that increase capacity to 7+1 or 8+1.

Speaking of aftermarket magazines, there are few guns in existence that have a bigger aftermarket support than Glock. The 1911, AR-15, and Ruger 10/22 are perhaps the only guns that do. What this means for you is that you can customize your G43 to literally be just the way you want it, from changing the magazines to the grip texture to the sights to the trigger to the guide rod to the finish and so on.

In other words, whatever you want to do to improve your G43, you can…and that’s not something that other 9mm single stacks such as the PPS or LC9 can claim to do because their aftermarket support is much more limited.

The G43 is a slightly smaller gun than other single stack 9s like the Shield or PPS. It’s right on the verge of being a pocket-sized gun, and with a deep enough pocket, it can comfortably be carried there. Recoil is just a tad bit snappy, but I found it to still be easy to control.

The grip angle is a one hundred and eight degree angle, which Glock has also become known for, and the trigger is advertised at being five and a half pounds. Both of the sights are polymer, so you might want to swap those out if you want metal ones.

In summary, the G43 is one of the best 9mm single stack autos available for these reasons:

As far as cons are concerned, the small size can also be seen as a disadvantage in that G43 is a little snapper than it competitors, and the fact that the sights are polymer also leaves just a bit to be desired.

Specs of the Glock 43 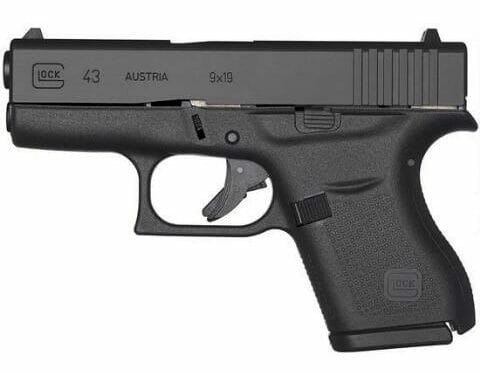 In conclusion, the Glock 43 is an excellent example of everything the 9mm single stack should be and a superb carry gun. It may be snappier than the fuller sized guns, but it has an impressive array of aftermarket accessories to it, it’s reliable, and it has a track record that no one can complain about.

Having a more inconspicuous holster is more popular with guns of smaller dimensions, we recommend checking out this article about the best ankle holster.