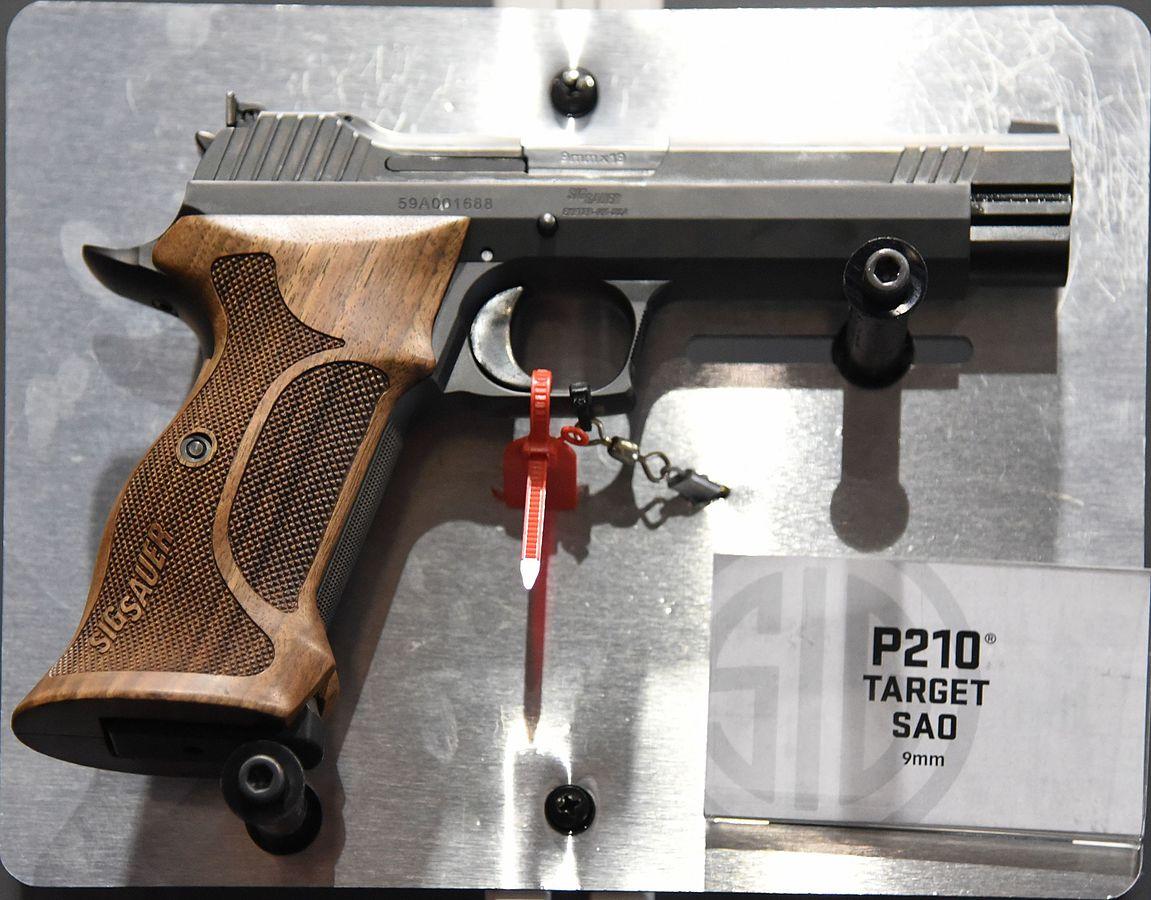 Sig Sauer P210: This Gun Should Demand Your Respect for 1 Reason

The SIG P210 is quite possibly the most accurate service pistol in the world.

Designed to Swiss Army specifications to replace the Swiss variant of the Luger, the design saw service in multiple national militaries and has been produced in three different countries. However, it has phased in and out of production due to its costly nature.

Recently, SIG Sauer, Inc. reintroduced the pistol to the U.S. market as a fully “Made in the USA” pistol. The path that it has taken to get there mirrors the development of SIG brand itself, from an industrial concern that made guns for the Swiss Army to an almost fully American brand.

The P210 first came about as part of a wave of post-WWII small arms modernization across the Swiss Army. The Swiss wanted to replace their variant of the Luger as it was becoming too expensive to manufacture. Swiss industry already attempted to simplify the Luger, but the nineteenth-century design of the pistol meant that only so much could be done.

As a result, SIG, which means Schweizerische Industrie Gesellschaft, or literally Swiss Industrial Company, produced a variety of small arms to meet the needs of the military. Initially, a variant of the French M1935 pistol was bought, but the design was adapted to fit Swiss needs better and the pistol was redesigned for accuracy. Still, the recoil spring and locking mechanism were largely taken from the M1935 in the P210 design.

The design was finalized in 1949 and was rapidly adopted by the Swiss and Danish militaries. By all accounts, it had a relatively successful service, proving reliable and very accurate. P210s were also popular on the civilian market, where they were used to compete in target shooting competitions.

However, the intricately machined P210 was rather expensive to produce. In the 1970s, the Swiss SIG entered a partnership with J. P. Sauer and Sohn, a German firearms manufacturer. At the time, Sauer hadn’t designed a pistol in over twenty years, with their last pistol being the WWII era Sauer 38H police pistol. The partnership was to share expertise and to allow SIG to more easily export firearms.

The new SIG Sauer GmbH, based in Germany, was a branch of the Swiss SIG. Unlike the larger SIG which produced a wide variety of products, SIG Sauer GmbH would only make firearms. Their first product was the P220, a single stack 9mm pistol meant to replace the P210. Designed for production on modern manufacturing equipment, the P220 was far cheaper but not as accurate as the P210.

The P220 would evolve into SIG Sauer’s most successful line of pistols, spawning the double stack 9mm P226 and it’s myriad of compact and differently chambered variants. It replaced the P210 in Swiss service; production of the P210 for military use by SIG ended in the 1970s, and it became a civilian gun following that.

SIG Sauer GmbH gained an American distributor in the 1980s in SIGARMS Inc. which was set up as a simple import company to sell SIG Sauer pistols to the U.S. market. Most European firearms manufacturers have an American branch registered as a company in the United States, but SIGARMS went a little further. In 1990, they began manufacturing components for SIG Sauer pistols in the United States, and by 1992, they began producing the P229 in .40 S&W. SIGARMS would become SIG Sauer, Inc. in 2007.

However, trouble at the Swiss SIG was brewing. While the Swiss concern managed to keep itself relevant by designing and producing the SG550 rifle in 5.56 for the Swiss military throughout the 1970s and 1980s, by the 1990s contracts were drying up. The firearms section of SIG was spun off into SIG Arms Hämmerli AG, which then became simply Hämmerli AG. The larger SIG concern completely cut ties with the firearms division in 2000.

Following some involvement with the Lüke & Ortmeier Gruppe, a firm of German investors, Hämmerli AG was restructured into SAN Swiss Arms AG, which continued production of P210s until 2005, when they stopped in favor of simply producing the SG550 series of rifles.

SIG Sauer GmbH then bought the license to produce P210s in 2010 and produced a limited run of P210s in 2010, which were sold in the United States by SIG Sauer, Inc. under the name P210 Legend.

However, the partnership between the SIG Sauer GmbH and SIG Sauer, Inc. would only sour in the following years. In 2015, SIG Sauer, Inc. announced that it would stop importing guns from SIG Sauer GmbH in order to take advantage of less restrictive American export laws and to cut costs. This caused major concern at SIG Sauer GmbH, as massive layoffs and a cut of almost half of the workforce resulted.

The latest P210s that were shown off at recent shows have been completely made in the United States, by SIG Sauer Inc. By all accounts, the new release is looking to be extremely popular on the American civilian market. But pistols made by SIG Sauer, Inc. have had a mixed reputation for quality. If the same manufacturing issues that have affected the P365 and U.S.-made P226s crop up, SIG Sauer, Inc. may slightly tarnish the P210’s reputation for reliability and well-crafted fit and finish.

There the story of the P210 ends, for now. Produced by four different companies: the original SIG, Swiss Arms, SIG Sauer GmbH, and SIG Sauer Inc, the pistol remains one of the most accurate in the world today.

Each company has made their own unique variants. Swiss Arms made special long barrel variants for target shooting, SIG Sauer GmbH made some slight alterations to the safety in the P210 Legend, and the latest P210 “Standard” from SIG Sauer, Inc. changes the safety position completely to that of a regular thumb safety and reprofiles the trigger guard.

However, what’s notable is Swiss Arms AG, SIG Sauer GmbH, SIG Sauer Inc, and even J. P. Sauer and Sohn all fall under the same German holding group, the same Lüke & Ortmeier Gruppe that bought and restructured Hämmerli AG back in the 2000s.

The main source of this article: Sig Sauer P210: This Gun Should Demand Your Respect for 1 Reason