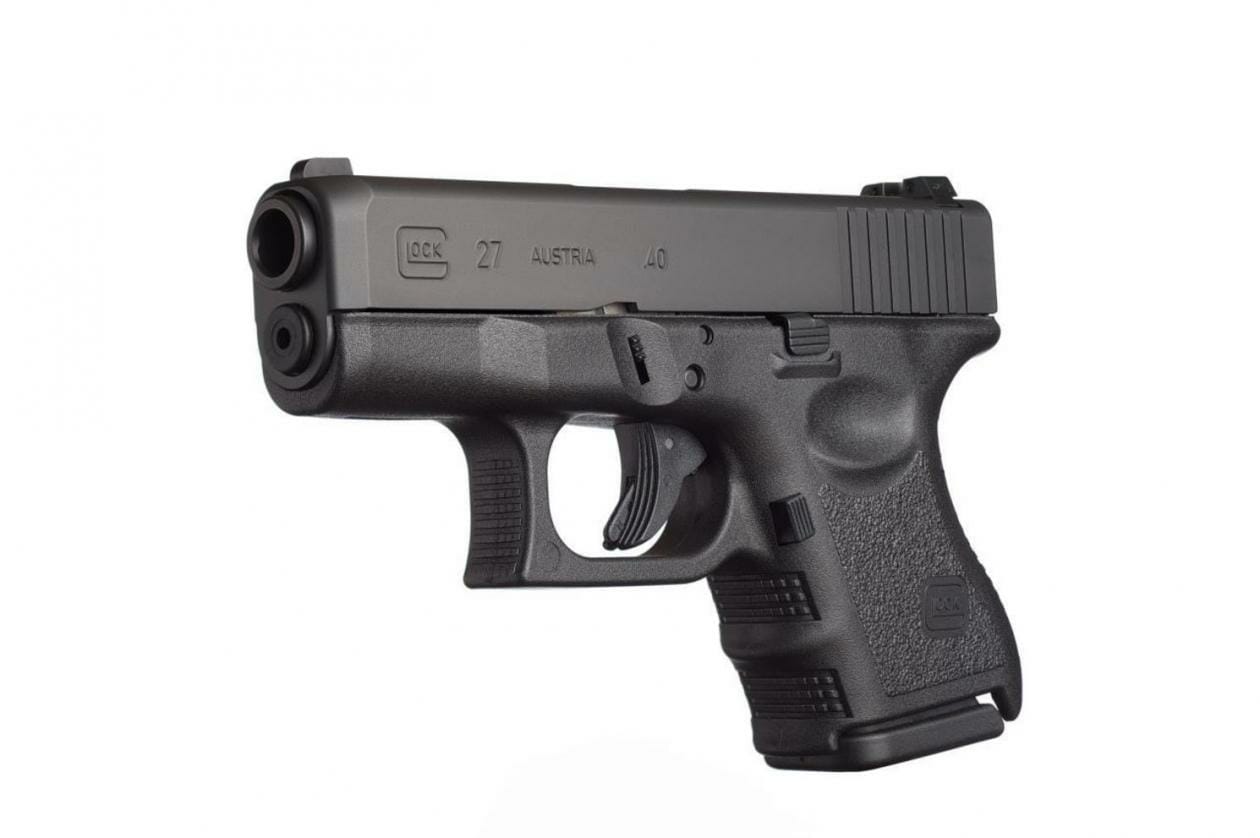 Why the Glock 27 Gun Is Truly Something Special

One of the fastest growing gun categories is the subcompact pistol for concealed carry. Generally, a scaled down copy of a full-sized semi-automatic handgun, subcompacts typically have all the features of larger guns but in a discrete package. The Glock 27, chambered in .40 Smith & Wesson is one such pistol.

The original Glock 17, a full-sized nine-millimeter handgun developed for the Austrian Army, has spawned an ecosystem of handguns for almost any purpose. Over the last four decades, Glock has introduced competition, full-sized, compact, and subcompact handguns with an emphasis on practicality, avoiding novelty and sticking to handguns and calibers that offer utility above all else. Combined with absolute reliability, it’s clear to see why Glock has captured a considerable portion of the worldwide police and military markets—including a commanding share of the law enforcement market across the United States.

The .40 Smith & Wesson caliber was developed in the aftermath of the infamous 1986 Miami Shootout, in which two Federal Bureau of Investigation (FBI) agents were killed and five injured by two criminals armed with more powerful firearms. The FBI went in search of a more powerful pistol round and after a short period with the 10mm Norma pistol round, eventually standardized on .40 Smith & Wesson as the standard pistol caliber.

The FBI’s adoption of any handgun or caliber tends to strongly reverberate through America’s law enforcement community. Today, .40 Smith & Wesson has an impressive 70 percent market share among U.S. law enforcement agencies. At the same time, Glock pistols became highly successful with police departments, due to a combination of a reputation for reliability, accuracy, and an aggressive marketing campaign. As a consequence, the most popular Glock for law enforcement is the Glock 22, for all intents and purposes the original G17 chambered in .40 Smith & Wesson.

The Glock 22 full size is not a small pistol. Originally designed for military and police use, it is designed to be openly carried by soldiers and police where the carrying of a pistol is as much a symbol of authority as it is a weapon. At eight inches long, five and a half inches tall and 34 ounces with a full magazine, it is difficult for an ordinary sized person to conceal a Glock 22.

The adoption of the Glock 22 by law enforcement made the company’s release of a subcompact version all but inevitable. A smaller version of the pistol in the same caliber would be highly useful to officers working undercover, any time or place where they needed a discrete firearm, or as a backup handgun. A smaller version of an officer or sheriff’s duty pistol would be ideal, minimizing the need for additional training and logistic support.

The Glock 27 is that pistol. The Glock 27 is simply a scaled-down version of the Glock 22, and uses the same ammunition as the larger pistol. Anyone trained to use a Glock 22—or any Glock for that matter—can be brought up to speed on the Glock 27 in minutes. The loading, chambering, firing, and jam clearing processes are all exactly the same, as is the takedown procedure.

The Glock 27 has an overall length of 6.5 inches, making it more than an inch and a half shorter than the Glock 22. It is also just 4.17 inches tall, more than an inch shorter than the full sized pistol. It weighs a full half-pound less than its larger sibling. It is typically equipped with a nine-round, dual column magazine, which results in a width exactly the same as the Glock 17 and Glock 22. Alternately, if a protruding magazine isn’t an issue, it can also utilize 10, 15, 16, 13, 14, and 22 round magazines.

The Glock 27 fulfills a valuable role, providing compact firepower for those that need it in a simple, extremely reliable package. Although it may not have the magazine capacity of larger pistols, it can also quietly go where other pistols cannot. For those that require such a pistol in their department’s choice of caliber, the Glock 27 fits the bill.

The main path of this article: Why the Glock 27 Gun Is Truly Something Special