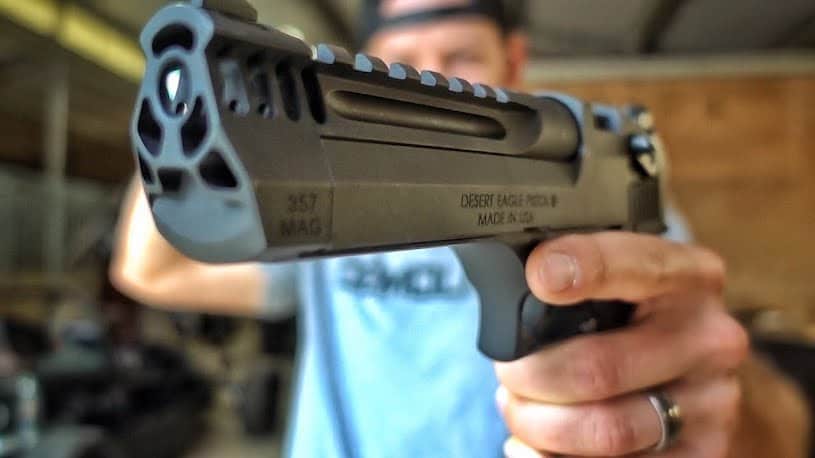 Most Accurate Handguns: What Determines A Handgun’s Accuracy?

Is there really any truth to the assertion that handguns are not inherently more accurate over one another and that it really comes down to the skills of the shooter? In all honesty: no, there is not. That’s because the above assertion simply ignores numerous factors: the build quality of the gun, balance, grip angle, caliber choice, barrel design, and so on. And then there is this factor to consider regarding the most accurate handguns as well: most handguns are actually much more accurate than the person shooting them.

What is the Most Accurate Handgun at 50 Yards?

We often get this question, but there are many other factors to consider as well when it comes to handgun accuracy, and those factors are exactly what we are going to talk about in this article, starting with a discussing on pistol accuracy vs. shooter accuracy.

This is exactly where the conundrum comes in: the skill of the shooter has more to do with their accuracy than the inherent accuracy of the firearm. For example, let’s say that Pistol A is an inherently more accurate weapon that Pistol B. 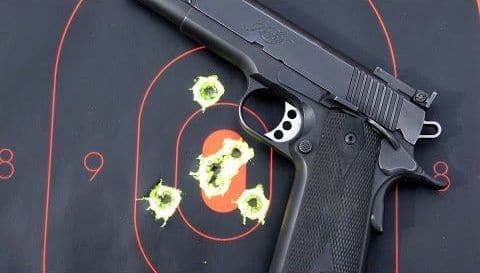 But then let’s say that our hypothetical shooter enjoys shooting Pistol B more because perhaps they prefer the ergonomics or the controls of the weapon. As a result, they practice with Pistol B more and become a more accurate shooter with it in contrast to using Pistol A.

Yes, Pistol A is still the more inherently accurate pistol, but the hypothetical shooter in this scenario is simply a more proficient shooter with Pistol B and therefore shoots more accurately with it.

What’s the lesson here? Simple: your personal skill with a gun is more important than the inherent accuracy of the gun itself.

Of course, this assumes that you’re shooting a quality and generally accurate pistol to begin with. It doesn’t matter how ‘skilled’ you are with a crappy pistol, because if a pistol has inherently terrible accuracy with shots going all over the place, you’re simply not going to be very accurate with it.

So your goal should be this: get a pistol that A. Is quality and inherently accurate enough, and B. That you enjoy shooting and can get plenty of time with at the range.

Therefore, what matters more with handgun accuracy than buying the ‘most accurate’ handgun available is really how much you like the weapon personally and will take the time to practice with it.

Now let’s talk about another major factor when it comes to accuracy: caliber choice. 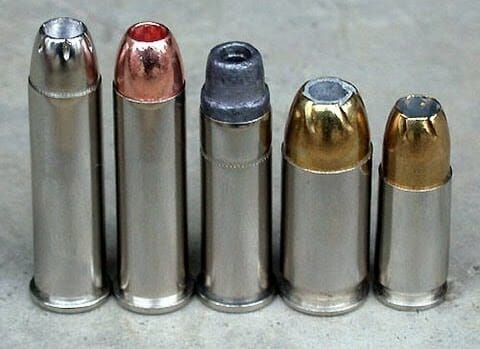 Here are some different factors to consider when it comes to pistol caliber selection. Larger bores can have a lot more stopping power. But they can also create a lot more recoil that hinders shooter accuracy. This means that even if the gun and caliber choice are both naturally accurate, there’s a chance that the recoil may throw the shooter off.

Granted, not all shooters are so heavily affected by recoil. Some shooters just have a greater tendency to flinch than others, which negatively affects accuracy.

Other factors that need to be taken into account as well. Include the weight of the gun, ergonomics, length of the slide and gun barrel, and so on, and we’ll talk about those later.

Another factor when it comes to ammunition choice is aerodynamics. The aerodynamics that are involved in the flight of a bullet truly affect velocity and drop, which also affects accuracy. Granted, a bullet can be accurate while still having significant drop over long distances, such as the .30-30 or .45-70 rounds.

The shooter would therefore need to understand the drop at an appropriate distance, and understand that shots could only be placed accurately within that distance.

For now, we’ll dive into the specific calibers that tend to do well accuracy wise: 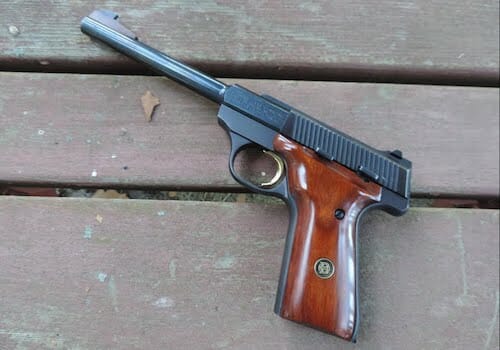 The .22 LR naturally creates incredibly low recoil, even in a lightweight pistol. This makes the .22 round one of the easiest rounds to shoot, and it also greatly helps to add in accuracy. While the naturally accuracy of a .22 may not be exceptional, with the right target pistol (such as one made by Ruger or Browning) and a steady hand, you’ll be able to deliver very accurate shots out of the weapon. 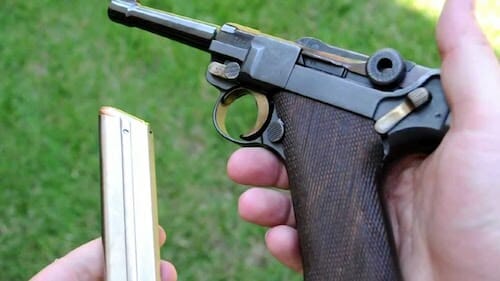 Easily the most popular centerfire pistol round in existence is the 9mm Luger. This is a caliber that only produces a minimal amount of recoil and muzzle flash. Even out of a lightweight gun and a short barrel. Firing multiple follow up shots accurately out of a quality 9mm handgun is not at all difficult. 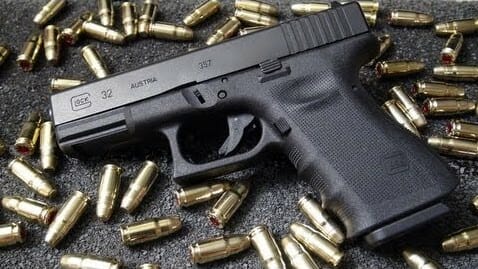 The .357 SIG round is a caliber that is well known for its inherent accuracy. This is just one reason why it is preferred by the United States Secret Service and the United States Federal Air Marshal service where the most accurate handguns are a must. 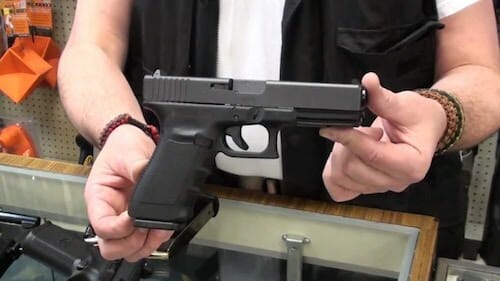 The .45 ACP is a slower moving bullet, but it’s still a very accurate round. Furthermore, the 1911 platform from which the .45 ACP round originated in the first place is a very accurate pistol for a number of reasons (which we’ll go into later), including its weight, fixed barrel design, and natural grip angle. 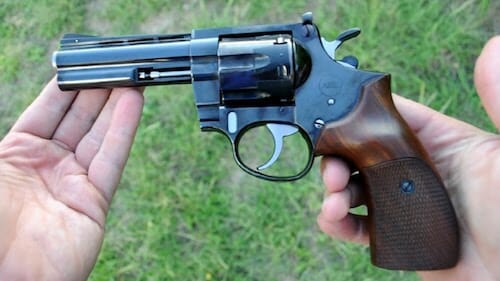 The .357 Magnum is essentially a hotter evolution of the .38 Special, and it’s more accurate. Something that can throw off a shooter’s accuracy, however, is the much greater recoil that the round creates. Fortunately, .357 Magnum revolvers can also naturally chamber and fire .38 Special as well.

Each of the above calibers are an accurate option, but which one will be the most accurate for you?

This is because both of those calibers are going to create significantly less recoil. Also producing less muzzle flash, enabling you to stay on target and fire faster follow up shots a well.

The barrel of the gun will also play a significant impact in determining the most accurate handguns. After all, the barrel is what the projectile shoots out of in the first place.

Most barrels, as you can imagine, have an expected service life just like the rest of the gun. The lesser quality the metallurgy involved in the gun, the lesser its service life is going to be. High quality metallurgy equals longer life.

Yet another factor to consider is how stiff the barrel is. As was just mentioned, the barrel vibrates each time that a bullet is fired. What can happen is that the barrel will vibrate more with each shot if it’s more stiff. Which in turn will make your bullet trajectories less consistent.

As a golden rule, the slower the twist rate, the more stable the bullet is going to be. Guns such as the Glock 19 9mm have a twist rate of around 9 to 11 inches, whereas .45 caliber 1911s will have twist rates of greater than fifteen inches.

Most Accurate Handguns and Clearances

The clearances both in and around your barrel also play a significant role in accuracy as well. What does this mean? 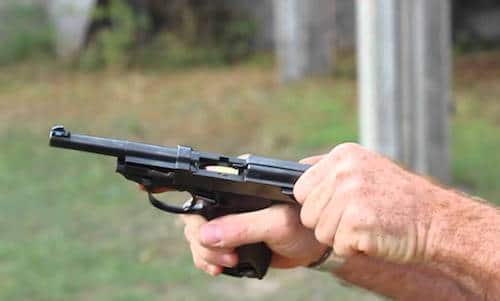 Think of it his way: each time a bullet is inserted into a barrel, it’s forming a seal. It’s not going to be airtight, but it’s still going to be sealed up. To ensure that the bullet fires out of the barrel as accurately as possible, the clearances need to be as tight as possible. In other words, there should be very, very, very little air escaping in the minimal amount of space between the barrel and the bullet.

In the case of a revolver, you want the space in between the barrel and the cylinder to be very minimal. As well in order to ensure a proper seal.

Also important are the clearances between the barrel, the slide, and the frame. If the clearances are not tight and are too loose, it’s going to cause problems. Tighter clearances will result in much better accuracy and precision.

But at the same time, you don’t want the gun to be too tight that accuracy is impeded. For example, precision rifles use a free-floating barrel so the stock does not deform the barrel in any way.

Here’s something that you’re probably thinking should have been talked about long ago: handgun sights! 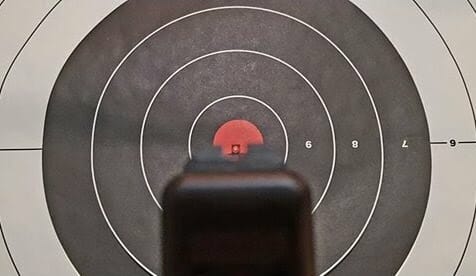 If you set a gun down on a bench rest and carefully aim at the center of a bullseye. You should expect the gun to hit the bullseye literally every single time.

If you’re missing. It may not be because of an issue with the gun itself or even with you, but rather with the sights. You may need to adjust them for windage and elevation.

To shoot accurately with your sights, you need to line up the front sight in between the two rear sights while holding them level. Focus on the front sight and bring the tip of it right over the target that you want to hit.

Again, if accuracy is off while using the sights in that matter on a bench rest, you may need to adjust them. Otherwise, there probably really is an issue with the gun itself.

Alright, so that was all a lot of information to digest. But in summary, getting the most accurate handgun for you comes down to a step process:

By following that above two-step process, you can ensure that you get the most accurate handguns for your needs.

2 thoughts on “Most Accurate Handguns: What Determines A Handgun’s Accuracy?”