Typically when someone goes to the range, the only thing they ever do is stand still while shooting targets — these could be static or moving targets. Target shooting can be beneficial no doubt, specifically to develop muscle memory, and to get properly acquainted with how one’s firearm handles and shoots.

But there are a lot of things that can’t be learned by just shooting targets, one of which is the need to move and shoot at the same time — then again, is it even practical?

In USPSA competitions, shooters get to run while shooting. In fact it’s not an option, more of a requirement.

They have to run as fast as they possibly can from one point to another, shooting targets as they go, because speed is factored into their final score.

I personally know someone who used to shoot IPSC, the parent federation of USPSA (I’d rather not divulge anything personal about the guy — may his soul rest in peace — lest I get hate mails), who, with all his shooting skills, got killed in an ambush a few years ago.

To me it’s because of a few things: he made some enemies, he got careless, and in general, competition shooting skills don’t carry over to real-world self defense scenarios.

There really isn’t anything wrong with this mindset, but in my opinion it doesn’t have to be taken as some sort of gospel truth because of the following reasons:

Practically speaking, learning to run and shoot at the same time is really only advantageous for those who shoot USPSA. You need to move fast when transitioning from one target to another and shoot them quickly, all the time making sure you hit Alphas if you’re looking to get a high score. 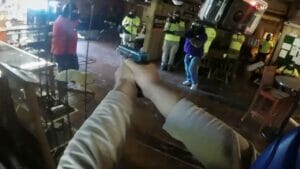 For law enforcement or personal defense applications, an argument can be made that there’s merit to learning how to shoot while running.

In real world defensive scenarios there are times when one should run, pause, aim, shoot, and run again, specifically when one only has to defend himself against someone who doesn’t have a firearm.

But when you’re engaged in a gunfight (i.e. you’re facing a bad guy who has a firearm and can also shoot at you) it’ll be safer to just shoot while taking cover.

Not that I’m saying learning to shoot while moving is pointless —  it has its merits. But perhaps there are a lot of other things we can focus on before we even try moving and shooting drills.

Here are a few of the basics I can think of.

Maintaining a firm grip on the firearm isn’t hard to do. After all, you only need to give it all your hands and forearms’ strength, the handgun shouldn’t go anywhere right? 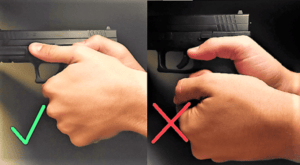 Well, yes, it’s not hard to get a firm grip. At least that’s what I thought, until over a decade ago when I realized gripping a handgun the tightest I could with all my strength results in terribly inaccurate shots because I lose stability whenever I pull the trigger — the handgun would sway ever so slightly to the left or right side depending on how hard I have to pull.

There are varying schools of thought about how to grip a handgun: when to breathe in and breathe out, how to wrap your hands around a particular semi-auto handgun’s or revolver’s grip design, which segment of your trigger finger should be used for pulling the trigger, etc. You’ll have to do your research on which method works for you.

If the handgun’s grip size is a concern, consider getting a gun that fits your hands’ size. Since there are a ton of different handgun designs out there with varying grip dimensions, not to mention differences in our individual hand sizes, you’ll have to explore, see for yourself which particular type of a gun’s grip you’re comfortable and can shoot accurately with. Perhaps even consider whether you can do better shooting a semi-auto or a revolver.

Or if you already have a handgun and you’re not looking to buy another, consider modifying/customizing your existing handgun’s grips or installing new aftermarket grips for it.

When aiming and pulling the trigger, breath control is important.

The breathing exercises aren’t too hard, I personally find it easy to breathe in and hold my breath while taking aim and pulling the trigger, then release the air from my lungs when I’m reloading. But your mileage may vary. 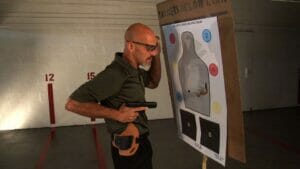 One thing to note, instead of aiming down your handgun’s sights, in highly stressful defensive situations you’d really want to just point and shoot without aiming down the sights. Competitive shooters and law enforcement people call this instinctive shooting. This can be very difficult and requires a lot of time for practice — and ammo.

If aiming is an issue (maybe you have astigmatism or some other eye condition), consider installing a laser sight or a reflex sight to your EDC. It’ll be a little harder to carry (unless it has an integrated laser like that of the Taurus Curve), but with the right holster and clothing it shouldn’t be too big of an issue.

In the isosceles stance, the shooter plants both feet firmly on the ground, he sets both of his feet apart from one another at shoulder width. He should be facing his target squarely, maintaining stability in his upper body. This stance is very natural and makes for comfortable shooting which allows for better accuracy, at the cost of having practically zero front-to-rear balance.

In the weaver stance, the shooter’s foot on his firing side is slightly planted in the rear while the other foot is firmly planted forward. He should be facing his target slightly diagonally, still maintaining stability in his upper body. This stance allows for better front-to-rear balance but unlike the isosceles stance, a relatively greater portion of the shooter’s chest is exposed from the side. 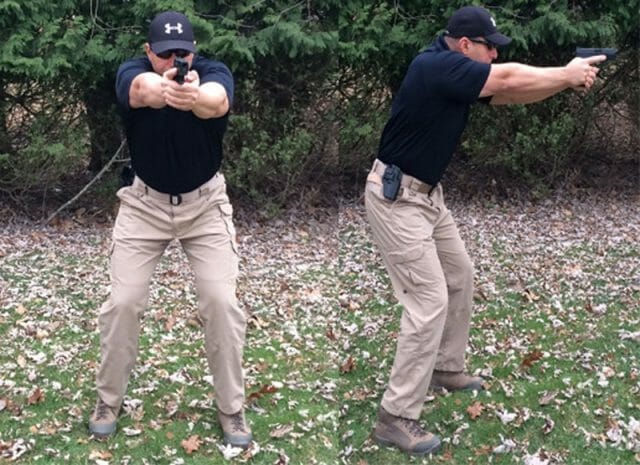 In the fighting stance, the shooter faces the target squarely but has his shooting foot back and his other foot forward. Stability in the upper body still has to be maintained, but since it’s a combination of the two previous stances, it has all the advantages and none of the disadvantages of both.

Before we all learned to run, we had to be taught by our parents to walk.

When you’re comfortable with your grip and stance, the next thing you’d logically want to concern yourself with is how to walk while aiming and shooting.

When walking with your gun raised to your arm’s length, you’ll want to maintain stability in your upper body while having a firm grip on your gun. In theory this sounds easy, but the reality is this is a very unnatural thing to do. When we walk, our body typically sways a little from side to side and forward to backward. It’s just how nature has programmed all bipedal creatures to walk to maintain balance.

Ideally you’d want others to see you as if you’re standing firmly on a moving platform that has wheels. Getting from point A to point B has to be smooth while shooting, and again your upper body shouldn’t be moving too much.

The real key is stabilize the muzzle on the target and don’t lose sight of it. Again, as mentioned above, you have to be able to pull the trigger without moving the muzzle. You can do whatever you want to do with your lower body, but your upper body shouldn’t move.

With repetition this becomes a habit, and you gradually start walking forward and backward faster while still being able to maintain a solid grip with your gun’s muzzle pointed at your target.

To make things simpler, visualize yourself as a tank, with your gun being the tank’s turret. Your lower body does all the movement, e.g. walking or stepping over things or running when needed.

Your upper body and core should be stable, with arms staying locked on to the target as best as you can to try to stabilize that muzzle while you’re pulling the trigger and moving at the same time. You can use your hips to pivot so you can move your aim from one target to another if needed, but your upper body must remain solid.

Side-to-side walking, or “strafing” as others colloquially refer to it, is really impractical because it’ll always be much faster to go from point A to point B by simply facing the direction where you need to go and running quickly to it instead of slowly making your way to it with your whole body facing your opponent.

Whether you’re practicing for competitive or defensive shooting, or you just simply want to walk the streets feeling a little safer, you’ll want to develop situational awareness.

In stressful situations where you have to face a bad guy who’s also armed, you would really want to scan the environment. You don’t want to be running long distances while shooting, because that would be highly impractical.

If you have to move, just keep running. Quick movements while shooting, or a quick 180-degree turn transitioning to side-stepping (when needed) and running can be a life saver.

The objective isn’t necessarily to hit your target, but to get out of the line of fire and eventually find a place where you can take cover. From there you can either return fire or try to disengage.

Running while gunning isn’t really practical. Sure it looks great when your favorite action movie character does it in a movie, and it’s a must to learn it when shooting competitively, especially if you shoot USPSA or IPSC.

But in personal defense situations, the only running and gunning anyone could do that would be of real benefit to them is by running to get out of the enemy’s line of sight and only shooting to provide themselves with covering fire.

There are a lot of other skills far more important. One should really look into the basics and prerequisites, some of which are outlined above, before even thinking about whether or not it would be worth all the time and effort learning how to properly move and shoot at the same time.