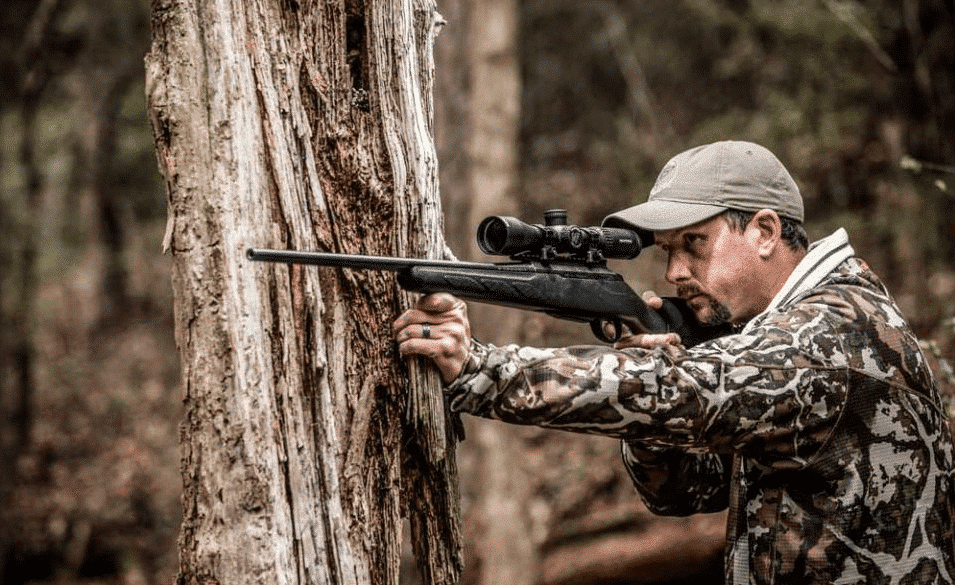 If you have even a passing knowledge of rifles, you know that a good scope can make all the difference in the world when it comes to pinpoint accuracy.

The Nightforce name is synonymous with precision, but it’s not the only name out there. There are countless scopes on the market, many of them tailored to the specific needs of the shooter (target shooting, small game hunting and so forth).

But if you’re looking for a badass scope that can best the competition, you can’t go wrong with the Nightforce SHV 3 10X42mm Scope and here I’ll discuss why.

For starters, it encompasses two of the most sought-after attributes most shooters would want out of a scope—versatility and innovation.

What do I mean by versatile? Well, maybe you were wondering what the SHV stands for. It actually represents shooter, hunter and varminter. To put it another way, the scope’s optics are designed to suit every shooting scenario short of a combat environment.

The SHV 3 provides users with variable magnification range from 3 to 10 x with a 42mm objective lens. It’s also available with two unique reticles and adjustment capability for windage, elevation and parallax.

Later on, we’ll talk about the reticle, what a reticle is and why it’s important. But first, let’s explore the Nightforce 3 10x42mm Scope’s place in the current marketplace and how it stacks up to similar scopes.

Personally, I like to be able to shoot at night and I haven’t found a single scope that is anywhere near as effective for night calling than the Nightforce SHV 3. It’s simply the strongest choice without having to go to a heavier optic.

So even though both scopes share a similar price point, the Nightforce SHV 3 is undoubtedly the better value for the money.

If you’re one of those shooters who likes to go full berserker, you and the Nightforce SHV 3 will become fast friends. It’s a rugged add on that can withstand even the most irresponsible manhandling.

When my Nightforce SHV 3 scope arrived in the mail, I decided to test its durability by dropping it off my back deck. Later, after mounting it and doing some target shooting, I dismounted and used the scope to drive a nail into the side of my bird feeder.

You can imagine my surprise when I remounted the scope and came to find that the point of impact remained unchanged after all that misuse. The windage and elevation adjustments also remained the same. It was clear to me that this scope was a force to be reckoned with.

In fact, the lens itself seems relatively shatterproof thanks to a small crush area that is built into the cell housing, giving the lens a crumple zone that protects against pressure and impact.

So now that I’ve rambled on about the bulletproof nature of this beast, let’s get into the meat and potatoes of what makes the Nightforce SHV 3 10x42mm Scope the go-to scope for every serious shooter.

What to Consider Before Purchasing

Buying a scope may seem to be a confusing prospect. There are so many numbers attached to a scope listing and you may find yourself hanging out on a limb.

The first set of numbers in a scope listing refers to the magnification capability of the device. This is the number or numbers in front of the X; in the example above, this scope has a variable magnification range of 3-10 times.

Had that been only a single number, it would indicate the scope is not adjustable for magnification. Magnification is important for both target shooting and hunting.

The second number refers to the objective lens size. This is the lens on the muzzle side of the scope, and the number in front of the millimeter abbreviation (mm) tells you the size of this lens. In the example above, the scope has a 42 millimeter objective lens. This is important because the larger the lens, the more light will reach through the scope.

Most scopes have adjustments for windage and elevation, but some have an additional adjustment for parallax, which compensates for an optical illusion where the reticle appears to move. In near magnification, this isn’t a big issue, but when you get into long-range scopes, parallax becomes more important.

Check out this video by Guns and Ammo as they discuss the Nightforce SHV 3-10x42mm scope at a gun show.

A Bit About Reticle

Reticle is the technical term for ‘crosshairs’. This is the vertical and horizontal lines forming an equal-armed cross inside the eyepiece.

The Nightforce SHV 3-10x42mm scope is available in either an International Hunting Reticle (IHR) or a MOAR reticle. Click the links provided to learn more about these different reticles.

The Nightforce SHV has a range of features that will be beneficial to both a target shooter or one who wants to hunt large or small game.

This Nightforce features an adjustable magnification, which makes it an excellent option for both target shooting and hunting. The magnification ranges from 3 to 10 times closer than what your eye can see, giving you a range of distances for more accurate shots.

If you were 30 yards from your target and the scope was set at 3x magnification, your target would appear to be only 10 yards away.

The Nightforce SHV has an objective lens size of 42mm. This is a larger lens size and allows more light to move through the scope.

The size of your objective lens is more important in hunting applications, when you may be out at dawn and dusk, bringing more light to your eye in these low light conditions.

The scope is available in two reticle types; both reticles are not illuminated.

The IHR (International Hunting Reticle) is what you’re probably used to seeing in a scope: two intersecting bars that get narrower as they near center.

This one, however, doesn’t include the 12 o’clock bar; it’s shaped more like an equal-armed T. It has a floating crosshair in the center of the scope.

The MOAR reticle is designed for long range hunting and shooting. It also provides the narrowing bars forming a T, but as you get closer to center, you’ll see a series of hash marks. These are ranging marks and help you to adjust accordingly for longer shots. It, too, has a floating crosshair toward the center.

Your choice of reticle will depend on your plans for the scope. If you’re target shooting or perhaps hunting at close distances, the IHR might be ideal. But for long-range hunting or target shooting, or for tactical purposes, the MOAR reticle would be a better bet.

The term MOA stands for Minute of Adjustment. You can learn more about it here at National Shooting Sports Foundation.

This is essentially the measurements for changing the scope’s position to correct for windage and elevation. The Nightforce has two capped knobs for adjustment; the caps prevent the knobs from turning unintentionally when you’re hiking through the woods.

This scope has a European-style fast focus eyepiece. This is important in hunting applications because it allows you to focus more quickly on the target, especially a moving target.

Nightforce offers a limited lifetime warranty on the SHV series scopes. This warranty guarantees your scope to be free of defects in materials or workmanship for the lifetime of the scope.

One excellent point in the warranty is that it’s transferrable. So, even if you buy a scope that’s been previously owned, you’ll be able to transfer the warranty.

The Nightforce SHV is priced in the middle of the range of scope prices. It’s not the cheapest out there, but it’s also not the most expensive.

If price isn’t an issue for you, this might just be the perfect scope for your needs. And with the warranty to back up your purchase, you can feel more comfortable spending your hard-earned money.

Alternatives to the Nightforce SHV

There are a couple alternatives to the Nightforce SHV that you might want to look at as well. Other scopes with similar capabilities might offer different features, such as an illuminated reticle or a lower price.

This scope offers similar magnification with a slightly smaller objective lens. But, it’s got 3 available reticles to choose from. It’s priced the same as the Nightforce.

For a slightly cheaper scope, you might look at the Leupold. It comes with similar magnification and a little smaller objective lens with 3 reticles, one illuminated, to choose from.

Buying a scope doesn’t have to be a hassle.

Once you understand the numbers associated with scope listings, you’ll be better informed as to which scope is right for your applications. Whether you’re a large or small game hunter or a target shooter, a scope can greatly increase the accuracy of your shots.

The Nightforce SHV 3-10x42mm scope offers a range of benefits, including choice of reticle, adjustable magnification, and a large objective lens. You’ll also get an adjustable parallax for long-range hunting.

Nightforce offers a transferrable limited lifetime warranty, so even if you buy a secondhand scope, you’ll have a warranty to back up your purchase. The Nightforce SHV might just be the perfect all-around rifle scope.