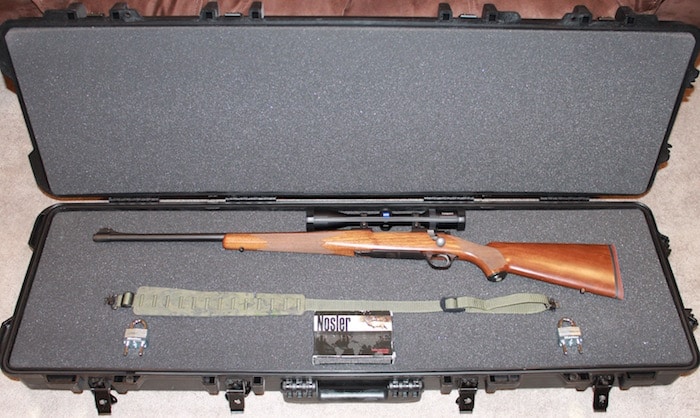 How to Transport Firearms On an Airplane

In 2019, the Transportation Security Administration confiscated more firearms than ever before. 4,432 guns were seized by TSA at 278 airports nationwide.

The airport with the most gun confiscations was the Hartsfield-Jackson Atlanta International Airport, with a total number of 323 firearms. On top of those staggering numbers is that fact that 87% of the total firearms found were loaded.

Already, only two weeks into the new year, the first gun was confiscated at Newark Liberty International Airport.  If you need to travel with a weapon, don’t become a statistic. It’s not illegal to fly with a firearm, but there are a very specific set of rules and guidelines that need to be followed in order to do so.  Below, the most important rules are detailed for how to transport firearms on an airplane. Before traveling, head to the official TSA website for the most up-to-date state, local, and national regulations.

How To Pack Your Firearm for Air Travel

In order to travel with a firearm, the first step is that it must be unloaded.  Absolutely no live round of ammunition can be in the chamber or cylinder.

Ammunition cannot even be in a magazine inserted in the weapon.  Once unloaded, the gun needs to be locked in a hard-sided case and submitted as a checked bag directly upon entering the airport.

This case can be locked with a key, code, fingerprints, etc.

Only the owner of the weapon should have the key or code to the case. Firearms cannot, in any circumstances, be transported in carry-on baggage.

How To Check Your Ammunition

Ammunition also has its own set of rules for being transported by air.  Like firearms, ammunition is prohibited in carry-on baggage, but can travel in checked baggage if packaged and declared appropriately.  Magazines and ammunition clips must be securely boxed, or included in the hard-sided and locked case with your unloaded firearm.

There are different rules for traveling with small arms ammunition.  Before flying, check with your specific airline to make sure the amount of ammunition you plan to bring does not exceed the limit.

What To Do When You Arrive At The Airport

When arriving at the airport, persons carrying firearms should report directly to the airline counter to declare their weapon.  A member of the Transportation Security Administration will, in most cases, ask the owner of the weapon to open the locked travel case.

Then, they will check to make sure the weapon is unloaded and if any ammunition is packaged appropriately. If there are any other state or local regulations that need to be followed, the TSA agent will comply with those rules as well.  After these steps are followed, the weapon, locked securely in its hard-sided case, is transported safely to your destination as a checked bag.

Other Checking Gun Factors To Consider

Firearm parts, such as magazines, bolts, firing pins, etc. can’t from be in carry-on baggage.  Even though these pieces are not connected to the actual weapon at the time of transport, they are not allowed in the passenger area of the airplane.  They can also travel in checked baggage or with the properly packed firearm they belong to. The only item weapon-related that is able to travel in a carry-on bag is a rifle scope.

Another clearly stated rule by the Transportation Security Administration is that you cannot travel with a toy or replica weapon in carry-on baggage either.  This is for the safety and well-being of the general public. Toy weapons can be transported in a regular suitcase or bag and checked at the airline counter as usual.

There is a chance that different airlines and airports have different rules and guidelines when it comes to traveling with firearms.  Another thing to consider before your trip is that some places may have fees associated with checking a firearm. It would be wise to research ahead of time and choose to travel with an airline or airport that does not charge a fee for traveling with a weapon.  This is especially important if you plan to travel with more than one firearm. Airline fees are rarely cheap, and can add up quickly.

Forgot to remove your firearm from carry-on?

Look accidents happen. I myself was trying to catch a 6:00AM flight and realized as my work bag was going through the X-Ray I had forgot to take my pistol out. The good news is as you saw above this is a pretty common occurrence lately. Every situation is different, but it will be okay.  I was actually able to put my weapon in my vehicle and make my flight.  I was still fined a hefty sum, by the TSA.  When you are facing thousands of dollars in fines from the TSA, do not assume you should simply write a check. By working with an experienced defense attorney, your lawyer can request a hearing with lawyers from TSA and attempt to negotiate for lower fines.

If flying with a firearm is necessary, make sure to research guidelines carefully well before the day of your trip.  This gives you time to purchase any necessary safety equipment, or call TSA to ask questions or look for clarification. Once again, do not rely solely on this list for your information, as rules and guidelines can be updated frequently.

One thought on “How to Transport Firearms On an Airplane”