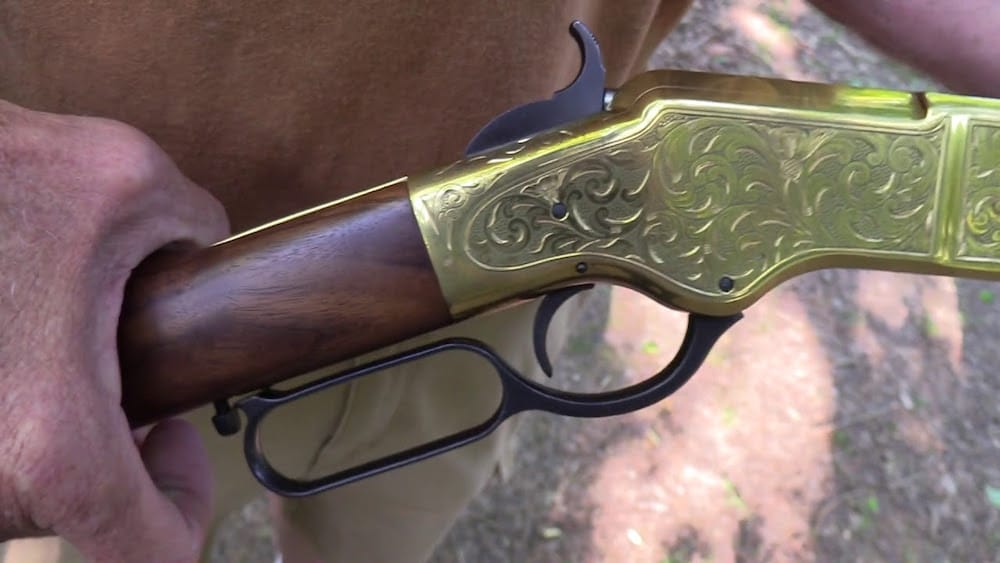 Not long ago I had the privilege of shooting two legendary rifles; The American Eagle and The Golden Boy. It probably goes without saying, but I loved every second of it. So when the news broke that Henry, who are the makers of one of the iconic most lever-action rifles ever built, was soon going to start being sold by Brownells, I was as happy as a clam.

Henry’s catalog is immense, so it might be hard to pick just one of these amazing firearms.

Well, to hopefully make it a bit easier for you, we have listed out the whole line below.

Let’s get into it, shall we!

is a beautiful recalling of its former model made back in 1860. This standard edition comes chambered in both .45 Colt as well as .44-40. Each of them features a 24.5-inch octagonal baller and a tube magazine capable of holding 13 rounds.

Weighing in at only around 9 pounds this is a great rifle for most beginners. With much of that weight in the barrel, it actively absorbs a large amount of kick, giving the whole family of firearms a “soft touch”.

Special editions of this rifle have been produced in the past but they were a limited run. They feature a lot of the very same specifications as their standard cousin, but they also possess improved ascetics.

Henry’s Classic .22 is a great lever action for first-time learners and range vets alike. The Classic Leaver Action was designed with some very solid adjustable iron sights, and for added range, a scope can be easily mounted. The specs are rather impressive too, weighing 5 ¼ lbs., 36 ¼ long, with a multi-grooved 18 ¼ inch barrel for improved precision.

As with the standard build, this lever action also comes in both the carbine and the magnum configurations.

If you want to learn more about this classic .22 rifle, we wrote more extensively about it not that long ago. You can find that post here.

Henry Lever Action Carbine .22 is just slightly shorter than the original, cutting the overall length down to only 34 inches. Additionally, the hand loop has been enlarged to accommodate gloves or folkers with a larger grip.

If you are looking for something with a bit more power, lever action is the way to go! This beast sports a 19 ¼ inch barrel, weighs 5 ½ lbs. and can hold up to 11 rounds of .22 Mag.

Meet the Mare’s leg! This stubby but fun firearm has a total length of about 25 inches with a 12 ½ inch barrel. Finally, it weighs only about 4 lbs. making it easy to carry for long hikes or walks around your property.

Again we return to the classic frontier look that Henry is so well known for. This amazing firearm has a 20-inch octagonal barrel, which offers precision from its length and stabilization from its weight distribution. It comes in three different calibers, .22 LR, .22 Magnum, and then there is the highly popular 17 HMR.

Henry always has the small game hunters in mind when creating offerings such as the small game rifle. It keeps all the style that we see in the Frontier rifles but adds a modern touch in the form of the Skinner sight. This results in an extremely precise firearm that is ideal for hunting even the smallest game.

The sight on the small game rifle is fully adjustable and lines up to the front brass bead perfectly, making this variant a true dream without the need for extra optics.

As pictured above there are two size options, standard or carbine, and within those two options come two more, caliber. Also, the Small Game Rifle as well as the carbine models all come equipped with a large loop lever.

The Varmint Express is a superb option for the small game hunter. This compact firearm has a 20-inch barrel, a high visibility Williams fiber optic sight set, and a tube capacity of 11 .17 HMR rounds. To top it off, the stock is made from beautiful American walnut!

If there is one rifle on this list that is as favored as the classic, it is The Golden Boy. This rifle represents Henry’s brand in both looks and performance. This functional showpiece is completely chambered and ready to start accepting you .22 LR, as well as .22 Magnum and .17 HMR.

It is furnished with a deep walnut stock and foregrip, and a Brasslite receiver. The .22 magnum and .17 HMR  can also come outfitted with a large loop lever.

If you are looking for something a bit more eye-catching, Henry has created a plethora of special versions of the Golden Boys, so at least one will stand out to everyone!

We start with Henry’s Deluxe Engraved 3rd Edition which covers all of the small calibers starting with the .22 LR, moving up to the .22 magnum, and finally the .17 HMR.

These hand engraved Golden Boys are just as reliable at the range as their original versions.

This rifle is inspired by the rifle that was given to Abraham Lincoln’s Navy Secretary by the name of Gideon Welles, by none other than the famous New Haven Arms Company that was reorganized in 1866 by Oliver Winchester. Secretary Welles was a crucial and key player in modernizing the US Navy during the Civil War and push for the U.S. to create the Medal of Honor for the Navy!

Henry branched out from the historical origins of the Silver Eagle and designed an updated engraving to adorn the Silver Eagle 2nd Edition and Golden Eagle. The new visuals depict a background of nineteenth-century scrollwork with a bald eagle flying high at center stage. The Golden Eagle goes a step further by emblazing the eagle in 24K gold.

The Silver Eagle 2nd Edition, as well as the Golden Eagle, only come chambered in .22 LR, a limitation that doesn’t take away from this rifles beauty.

The American Beauty was made by Henry as a lasting memorial piece dedicated to the women of America. It was designed to reflect the spirit of the American woman, strong, reliable, and beautiful.

The rifle gets its name from the rose that is highlighted with 14K gold. Oh and that’s not just any gold, it is rose gold!

Above the blooming rose is a banner that reads “American Beauty”, and around both of them is a floral scroll design.

I think one of the coolest things about this rifle is that it was made to be a bit more appealing to women while trying to avoid falling into the “pink is for girls” trend.

In this seemingly paradoxically named rifle is a color-shifted version of the classic Golden Boy, and it comes chambered in .22 LR, .22 magnum, and .17 HMR.

The entire family of Big Boy rifles is approved for completion by SASS, making it a go-to for those interested in Cowboy Action styled shooting. Mounted to the 20-inch octagonal barrel is a rear semi-buckhorn sight that is fully adjustable and interchangeable white diamond inserts and a tall brass bead in the front. The American walnut body is excellently accented by the brass receiver and barrel band in the signature Henry appearance.

Just like with the Golden Boy, if you are looking for a more eye-catching Big Boy then you have quite a few options!

The addition of the hand engraving makes the already gorgeous Big Boy into a true work of art. The Big Boy Deluxe Engraved 3rd Edition is available in .44 Magnum, .45 Colt, and .357 Magnum.

These two special editions of the Big Boys stand out with the bright colors and striking detail.

The Cowboy is a memorial to the ranch hands and cattlemen who made the era of the West what it was. The Wildlife represents the rich heritage of hunting in America by displaying some of the classic hunter prizes.

With the scenes first carved into the stock and forearm, each one is then hand painted making both of these rifles worthy of being displayed as the art they are.

This rifle keeps the lever action and gets a modern upgrade to the chrome bolt which is affixed by a six-lug rotary head designed for increased reliability. Then there’s the 20-inch barrel that offers amazing accuracy due to its free-floating design. This is one of the few Henry rifles to have a box magazine.

This rifle comes in two variants, both with a four round tube, the first is the steel finish and 18.43” round barrel followed by the brass finish and 22” octagon barrel.

In the same fashion, the .30-30 Lever Action comes in both a steel finish with a round barrel and a brass finish with an octagon barrel like the .45-70. The smaller round size allows for a five cartridge magazine.

The .30-30 and .45-70 are both designed for hunting larger game and share several physical features too. For example, the semi-buckhorn rear sights with inserts and predrilled and tapped optic mounting holes.

Staying with the trend set by the Golden Boy and Big Boy, Henry produces some alternate variants of the large caliber rifles.

With a completely unique look in the Henry line up, the Lever Action .30-30 and Lever Action .45-70 are made from materials that focus on function above anything else.

The metal parts are made from a hardened chrome plated steel that is resistant to chipping, flaking, and corrosion earning the name All-Weather. Henry also treats the metal to improve the hardness of the surface, help to reduce friction and make it a bit more resistant to scratches.

Instead of the classic walnut, the All-Weather Lever Action rifles use a stained hardwood coated to resist the weather and the ravages of normal use.

The barrels on these are round, not octagonal like most Henry’s.

The Color Case Hardened Editions give the Lever Action .30-30 and Lever Action .45-70 an interesting visual effect while maintaining the same action and reliability as standard finishes. These have the familiar octagonal barrels that dominate Henry designs.

Paying tribute and as a memorial to the game that was hunted by the pioneers, the Wildlife Editions are hand carved with depictions of animals in nature.

The .30-30 Wildlife Edition depicts a leaping buck on the left side and a buck’s head on the right side. Both of which are surrounded by the most beautiful and intricate American scrollwork.

The .45-70 Wildlife Edition features a bear on the left and a moose head on the right and has similar American vine scrollwork as the .30-30.

The Pump Action Octagon Rifle is a clever combination of the iconic Henry octagonal barrel with the classic American pump action. It has grooves on the receiver for adding a nice scope. Also, it ships with both standard 3/8 inch dovetail slots and fully adjustable semi-buckhorn rear sights. This gives owners the ability to swap the sights on a whim.

The Pump Action Octagon Rifle is produced in both  .22 LR and .22 Magnum.

Henry’s AR-7 is perfect for the intrepid hiker or adventurous sportsman alike.

This snazzy little number is chambered in .22 LR, and weighs a minuscule 3.5 pounds. In total it has an assembled length of right at 35 inches. When broken down and stored in the water and impact resistant stock, that length drops to a storable 16.5-inches. There are not many rifles that can even come close to matching this level of compact storage and sheer durability.

Well, that covers a large portion of the Henry rifles available from the great people over at Brownells. I hope it has helped you pick a favorite.

Do any of these Henry rifles call out to you? Did this list teach you anything about Henry rifles? Do you already own any of these gems? Let us know down in the comments! All of your feedback helps us to improve our content for you.