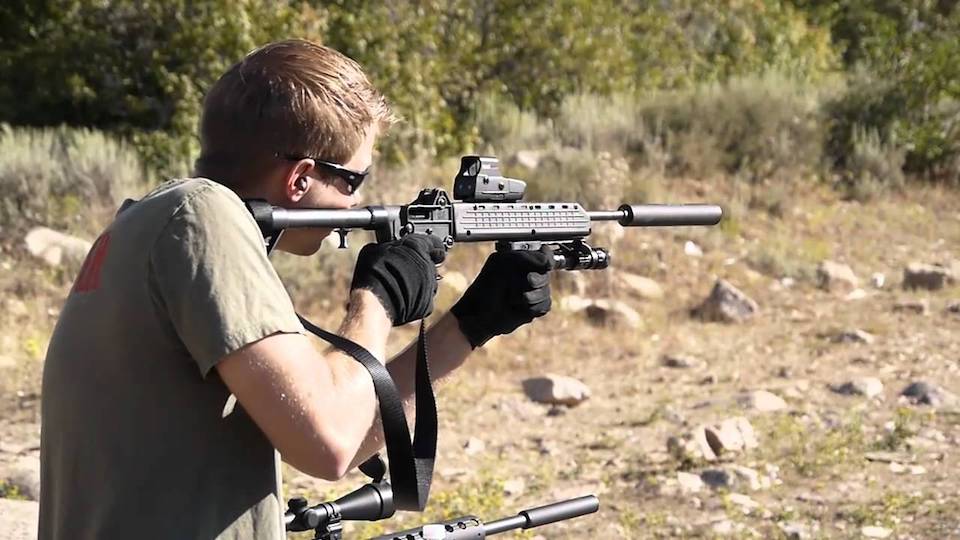 I’ve played around with a few different Kel-Tec guns in the past, but it wasn’t until recently that I was able to get my hands on a Kel-Tec Sub-2000. Yes, I know, I am late to the game… but what better way to commemorate a great day out on the firing range than to write up a review on this interesting rifle?

Well, I may be throwing around the word ‘rifle’ a little too loosely there. The Kel-Tec Sub-2000 is a blowback powered semi-automatic gun that looks very much like a stripped down, skinny rifle. Seriously, if anything, this gun is just neat to look at.

And that is okay, it doesn’t need all that extra bulk because it is designed to fire light load ammunition such as 9mm or .40cal and it can accept the very same clip that you are using in your Smith & Wesson M&P, Sig Sauer P226, Beretta 92 or 96, and your Glock 17, 19, 22, or 23. They slide in and out rather easy, and I have yet to have any of my magazines get stuck or jammed.

Because you are firing such a light load from this rifle, you will also notice that there is not too much recoil to worry about. I do, however, recommend wearing thicker clothing when you take this gun out to the range for a long day of shooting because the design of the buttstock is simply not very comfortable.

I could only imagine firing this rifle all day while in a plain old t-shirt. So, while the blowback itself isn’t too heavy, the overall design of the butt is what makes it a bit of a pain as it has some poorly placed and rather sharp corners that really like to dig in. Thicker clothing or repositioning where you are resting it seems to remedy it quite a bit.

The Sub-2000 features a 16-inch barrel that is threaded to accept a silencer. When unfolded, the barrel and stock measure 29.5 inches in length, when folded, this size cut in half down to 16 inches. And weighing in at only 4 lbs., maneuverability and storage of the Sub-2000 is a breeze. Just fold it up and toss it in your range bag and head out for the day.

Overall, I have yet to be severely disappointed in the Sub-2000. Honestly, I’m kind of disappointed I didn’t get my hands on one sooner. 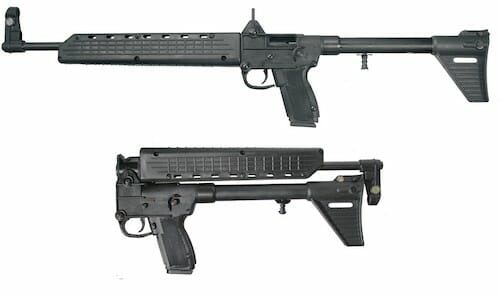 I have quite a few things that I want to praise this gun for, but I am going to keep it simple. There are three things that really make this gun a keeper in my opinion. 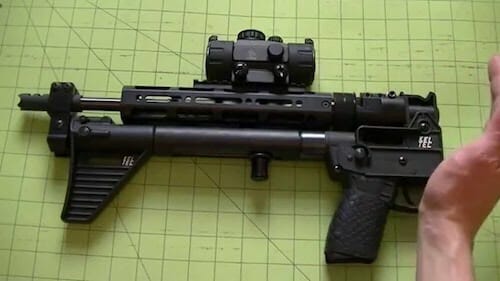 First, the foldable design works flawlessly for this rifle. I can’t tell you how many times I have used a rifle and noticed a certain quirk about it that just seems to stand out. More often than not, it is supposed to be the signature design of the gun, but instead, it just feels like a secondary feature.

Fortunately, this isn’t the case when it comes to the Kel-Tec Sub-2000. Instead, the folding capability feels more like the cornerstone of the gun itself. It does more than just stand out, it represents what this gun designed for from the ground up; stealth and mobility. When folded, the Sub-2000 fits perfectly in most backpacks, handgun cases, or hidden away in the glove compartment.

Second, the ability to switch between all my favorite magazines from my everyday carry pistols is invaluable to me.  This rifle accepts Smith & Wesson M&P, Sig Sauer P226, Beretta 92 or 96, and Glock 17, 19, 22, or 23 magazines. This should be more than enough to cover just about anyone’s needs.

Finally, this thing is super-lightweight! When it is unloaded, it weighs in at about 4.25 pounds

There are a couple of things that I thought Kel-Tec could have done so much better with.

For starters, the trigger on the Sub-2000 is a bit more spongy than I like. It is easy to pull, (about 9.5 lbs.) but it just doesn’t feel like it gives that much resistance, so you never really know how close it is to engaging. I’ll go ahead and tell you right now that the point in which the trigger mechanism finally engages is when it touches the back of the finger guard. That extra little bit of pressure that you must put on this trigger can easily result in a shot that is off target. 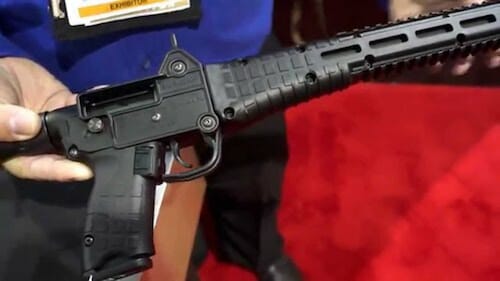 Secondly, you also must contend with a few accuracy issues. After putting 500+ rounds through my Sub-2000, I can tell you that this gun is not going to be suitable for much competition shooting. It does pack a good deal of power, but when you venture past the 75-yard mark, precise shots start to get fewer and farther between.

And that’s about all there is when it comes to the cons I have noticed so far. Neither of these should really be considered deal-breakers, and they are easy to correct.

There are two highly-rated accessories that most Kel-Tec Sub owners like to try and get their hands on. Of course, you can mod this rifle to your heart’s content, but ultimately, it is a gun that really shines with minimalism, so why alter that more than you really need, right?

Here are my two must-have accessories for the Kel-Tec Sub-2000: 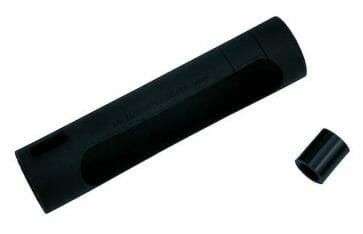 Due to the way that the Kel-Tec Sub-2000 is designed and where the sight is positioned on the barrel, your cheek will be resting on the bolt tube when you are trying to line up the perfect shot. This bolt tube cover makes sure that you can rest your cheek in comfort instead of cold metal.

The material that this cover is made from is completely resistant to UV rays, extreme colds, solvents, and lubricants. Basically, anywhere your rifle can go, the tube cover may follow without the worry of it taking massive wear and tear too quickly.

Installing this tube cover is extremely simple; Simply remove the butt stock and then slide your tube cover into place. To install the Operating Handle Cover that comes with it, just soak it in hot water and then slide it over the operating handle. The whole process takes a total of about 5-10 minutes, and it is time well-spent! 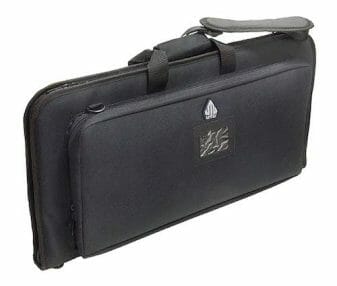 The UTG Covert Homeland Security Gun Case is a prime choice for anyone who owns… well, just about any gun, but especially those who own the Kel-Tec Sub-2000.

This gun case features a large front compartment, fully equipped with 6 Velcro straps to further secure your rifle. The straps are wide and lengthy enough to securely hold a wide-based stock.

The secondary compartment is almost as large, and it can hold up to around 7-8, 30 round magazines in total.

The overall build quality is better than what you would probably expect for the price. If you just must purchase a new case to go along with your new Kel-Tec Sub-2000, this is the one I recommend starting out with.

The Kel-Tec Sub-2000 is a foldable semi-automatic rifle that is designed with mobility and stealth in mind, and it is the perfect gun for a newbie to get a little practice in on without dislocating their shoulder.

Keep in mind that while the Sub-2000 is a rifle, it is more accurately a semi-automatic pistol built into a stock. You won’t be hitting targets with much accuracy from 200+ yards away, but it sure is fun and useful for the regular practice routine at the range.

Overall, I have really enjoyed shooting this gun and have experienced no major with my Sub-2000 that haven’t been easily corrected.

If you don’t have this rifle in your gun cabinet already, go pick one up soon. Trust me, this thing will surprise you.