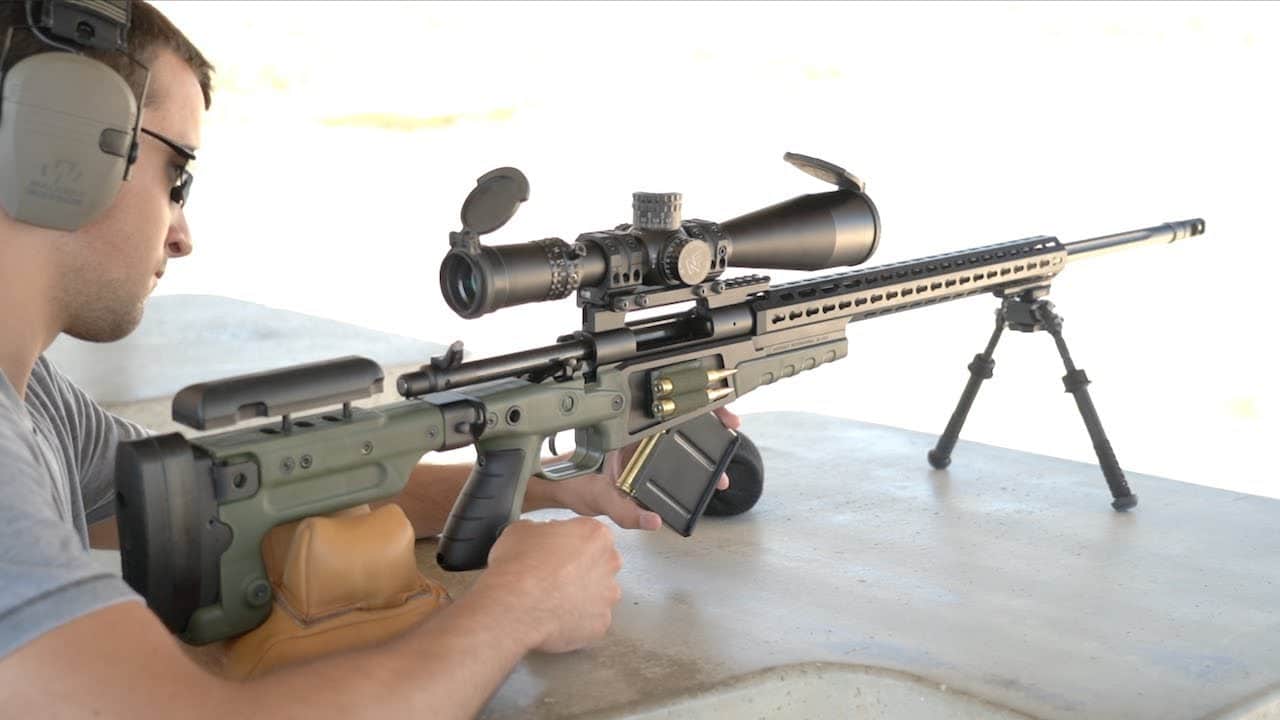 Comparing ammunition is always an interesting and difficult task. Many shooters can easily tell you their favorite firearms and nearly all of them can provide reasons for their choices, but the choice of ammunition is just as critical yet rarely ever gets the same attention. Comparing the .300 Blackout to the .300 Win Mag is an especially challenging discussion, and this is the discussion that we will be having in this article.

The .300 AAC Blackout was developed specifically for the U.S. military’s M4 carbine by the Advanced Armament Corporation (AAC). For ease of discussion, from now on we will refer to it by its SAAMI designation, the .300 BLK.

The .300 BLK is an intermediate cartridge, with dimensions of 7.62x35mm, and was designed with the specific purpose of achieving the same ballistic performance as slightly larger rounds, such as the 7.62x39mm.

However, the main design requirement was that the 300 BLK would be useable in the AR-15 using standard magazines.

Take note that this round is not interchangeable with the 7.62x40mm Wilson Tactical ammunition, contrary to what some other reports will tell you.

Most military and former military gun owners have come to appreciate the performance and availability of the standard 5.56 NATO round that is widely used in the M16, M4, and commercial equivalents. However, certain special operations groups and unique missions required superior performance and stopping power than these rounds, and also required superior subsonic accuracy than 9mm submachine gun or pistol ammunition.

The 300 BLK met these conditions and overcame the notable deficiencies of other heavy-caliber ammunition. First, the cartridges fit in the M4 carbine despite the size and weight of the .30-caliber projectile. This is one advantage that the .300 BLK has over the .308 Winchester caliber.

Although other rounds had achieved this success before, the .300 BLK became the first commercially popular round, perhaps due to the cooperative design and marketing efforts between AAC and Remington.

Remington  was a necessary partner in order to produce this round according to the military specs, because it was originally intended for a .30-caliber round useable in U.S. military issue rifles and carbines and compatible with standard-issue bolts and magazines.
Any new entrant into the intermediate cartridge game needs to be compared to the .223 Remington, or standard 5.56x45mm NATO round.

Soldiers, sailors, and airmen alike are familiar and well-trained on this round and it is perhaps the round for which most rifles and carbines are designed to chamber. Its long history with the U.S. and NATO militaries have granted it the most refinement and development over the many years of field use. By making a heavier round that is compatible with the same large spectrum of firearms, AAC/Remington ensured its initial and lasting popularity in both the military and commercial markets.

To adequately evaluate and compare ammunition, it is perhaps best to focus on hunting scenarios. Hunting distances vary, of course, depending on skill and practice and intended target, but there is probably an upper reasonable limit for an average hunter.

A bullet, shot from that range, should have adequate time to reliably expand in order to deliver a fatal shot. The remaining kinetic energy of that bullet is probably not as important as most hunters hear, but for the sake of discussion, let’s keep the bullet at the often-reported figure of 1000 ft-lbs for medium-sized wild game.

Several bullets on the market can meet these specifications. The Hornady FTX bullet, loaded with 135 grain, will do the job with a muzzle velocity of 2085 fps; so will the lighter-packed GMX round, due to the polymer-tipped bullet, all other factors being equal. The VOR-TX Blackout round by Barnes is also accurate and effective with 120-grain, and delivers adequate expansion and penetration to bring down most targets.

Either of these bullets is perfectly satisfactory for most conditions, but the trajectory drop is considerable at hunting ranges. For example, zeroing the sight at 100 yards will lead to an approximate five inch trajectory drop at 200 yards. A good hunter will probably want to adjust their sights an inch high at 100 yards in order to deliver a reliable vital shot at typical hunting ranges.

The Blackout cartridge is still an excellent choice for bringing down deer, easily surpassing the performance of any .22 caliber centerfire ammunition such as the .223 Remington.

The .300 Winchester Magnum was developed by the Winchester Arms Company. This .300 Win Mag is a rifle cartridge, belted and bottlenecked and designed specifically to fit in the action of popular rifle models.

The .300 Win Mag is commonly used by snipers in military and police tactical units, as well as by hunters for big game hunting. A high quality rifle chambered in .300 Win Mag and equipped with a good long eye relief scope makes for an absolutely devastating weapon at long ranges.

The design started with the .375 H&H Magnum, which Winchester shortened and widened to fit a 7.62mm bullet. They then tapered the cartridge in order to provide more powder volume.

The shoulder was moved upward to allow proper chambering, but the bullet requires deeper seating now due to the shortened neck, which cannot fully host the larger bullet caliber.

For versatility of purpose, the .300 Win Mag beats most competitors. Military and law enforcement, as well as civilian sport and game hunters and competitive target shooters, have all adopted this cartridge for their respective purposes and value its performance. It is especially popular with hunters in the U.S., who find it an effective and versatile cartridge with many grain-selection options, from 165 grain to upward of 200 grain.

The .300 Win Mag might be inferior in performance and power to the .300 Weatherby Magnum and Remington Ultra Magnum, but it is still certainly capable of bringing down elk, moose, bear, and bighorn sheep. Its inherent long-range accuracy due to the advantageous bullet weight makes it a valued purchase.

Competitive shooters have also praised its accuracy and performance, using it to achieve honors in multiple 1000-yard competitions. Finally, snipers in both military and law enforcement typically make the .300 Win Mag their cartridge of choice for marksmanship and accuracy at long range.

Large-capacity cartridges that fire .30 caliber bullets have been in demand for some time, and the first magnum was debuted over a hundred years ago by the .30 Newton. In recent decades, both H&H and Weatherby have proven the hunting effectiveness of their .300 magnum rounds, and Winchester might have been relatively late in entering this market, but have entered strongly.

Not until the most recent decade did other magnum cartridges successfully compete with the .300 Win Mag’s effective combination of size and proportion. Despite the competition, it remains the most popular magnum hunting cartridge available with American big game hunters by a wide margin.

There is a lot of valid reasoning behind its immense popularity. It can be chambered in popular rifles models in every action style except pump action, so whichever rifle action you find most appealing will have a .300 Win Mag option for it.

The recoil might be tough for new shooters to handle, but the cartridge makes up for it with a lethality that can bring down larger game such as moose and elk. Practice and experience can make this recoil more manageable. If the hunter has more demanding requirements for his hunting cartridges, the .300 Win Mag can also be hand loaded to tailor more personal specifications.

Elk hunters in particular love the .300 Win Mag. The weight and power ensure a clean kill with the first shot at long ranges, and they tend to prefer 180-200 grain bullets.

The heavier bullets are especially effective on longer range shots, but shorter shots can cause some minor difficulties – such as lack of penetration and deformation when hitting timber and bones. Some elk hunters, aware of these drawbacks, prefer the Hornady InterBonds, Nosler AccuBonds and Partitions, Swift A-Frames and Sciroccos, and Barnes Triple Shocks/Tipped Triple Shocks.

These bullets have slightly better close-range effectiveness and yet still provide the long-distance expansion that the bullet is really intended to produce.

The .300 Win Mag burns 20% to 25% more powder than the .30-06 Springfield, which gives it a 10% increase in velocity, as long as it is firing bullets of the same weight. This cartridge also requires about 80 grains of a slow-burning propellant.

This addition can increase the bullet’s muzzle velocity by 300 fps faster than the .30-06 Springfield cartridge and really gives the bullet the necessary punch and penetration at long distances. Overall, the .300 Win Mag is a significantly more powerful caliber than the .30-06.

But as would be expected, this power necessarily delivers a significant recoil. A shooter will experience 35 ft-lbs of impact from a 180 grain bullet fired from a 9-lb rifle, using a fully-loaded .300 Win Mag.

Each magnum cartridge has its advantages and disadvantages. For hunters going after medium game, such as deer, the .300 Blackout is a more comfortable yet fully effective cartridge.

Its lighter load is still entirely suitable for a variety of purposes, but for a strong performance in competitive shooting and military/law enforcement sniping, the .300 Win Mag is the cartridge of choice. Additionally, you’ll want the extra strength of the .300 Win Mag when hunting larger game.