When most people think about hunting tools, they tend to think of either firearms or crossbows. Very rarely do people think about the sling shot, little more than a Y-shaped with a rubber band, as being a serious hunting or defensive tool.

But in reality, slingshots are more effective than you may think, and you won’t want to overlook them. Contrary to common public perception, slingshots are not a kids toy.

Slingshots utilizes kinetic energy delivered by the pull of the rubber bands to send a projectile rocketing into the air. If the rubber band is strong enough and pull back far enough, it can have enough energy to kill small game or birds, or to deliver serious damage to an attacker.  It all really comes down to making sure that you have the best model.

Let’s take a look at the uses for a slingshot in a survival scenario, what to look for in a sling shot, and then the best makes and models for you to consider.

Uses For A Slingshot In A Survival Situation

There are two primary uses for a slingshot in a survival situation: for small game hunting and for emergency defense. It can be more effective for both of these purposes than you may have initially suspected.

While hunting with a slingshot may seem laughable at best, you should know that a slingshot is fully capable of killing small game within reasonable distances (such as around 30 feet). And this combined with the fact that the slingshot is quiet, dead simple, and has an infinite amount of ammunition (just pick up rocks on the ground) adds to its versatility.

Here are some additional advantages to using a slingshot for hunting:

This isn’t to say that the sling shot is the best small game hunting weapon by any means, but it is to say that it is a perfectly viable option. Keeping a slingshot in your bug out bag or your car could be a good idea for this very reason.

The slingshot can also be an effective self-defense weapon as well. The advantages for the slingshot as a defensive tool include the following:

Again, the slingshot may not be the best defensive weapon just as it is certainly not the best hunting option. But also again, this doesn’t mean that the slingshot deserves to be overlooked.

Even if the slingshot should not be your primary weapon, it still fills a specific niche, and carrying one around in your vehicle or your bug out bag is not a bad idea for the above reasons.

Qualities To Look For In A Slingshot

Selecting any random slingshot in the store would be a bad move. Rather, you want to spend the money on a quality slingshot that can actually be an effective hunting and self-defense tool.

The first quality to look for is the material of the frame. Most slingshots are made out of one of three materials: plastic, metal, or wood. Each of these have their own pros and cons.

The wood is definitely the most classic option, but it’s not the most durable.  Metal slingshots are far more durable (as well as usually lighter), but they are also the most expensive. Plastic slingshots often have a glass filled nylon, and are lightweight and resilient as well.

The next thing to look for is the band. A poor quality bad completely ruins the entire reason for owning a slingshot in the first place. Rubber tubes are the longest lasting option, and are also the best choice to use for hunting.

Flat bands are a good choice for those who do not use their slingshots often but strongly desire accuracy. A flat bad will, generally speaking, produce faster projectile speeds and improved accuracy over rubber bands.

Next, pay attention to the grip of your slingshot. A comfortable grip is extremely important because without it, you won’t enjoy using your slingshot and that means you won’t get as much practice in.

A good grip will also reduce fatigue in your wrist and hand, which is another great benefit. It’s also why handling a slingshot in person before buying is a good idea.

You can order a slingshot online if you want, but testing out that model in person first, if possible, would be vastly preferable.

While not completely necessary, does the slingshot you are considering have a hollow handle? If so, that could be a major plus because it’s a convenient location to carry spare ammunition or spare bands.

Not all slingshots have a hollow handle, and it’s certainly not a requirement. It’s just something to consider.

The Best Slingshots To Consider

Now that we know the qualities to look for in a slingshot, lets take a close look at some of the makes and models that are currently available and that meet the above criteria. 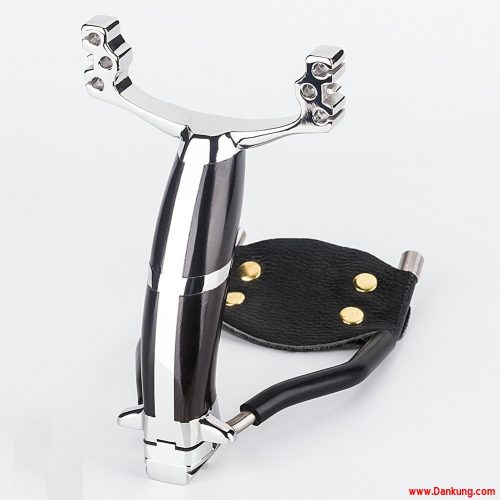 The Dankung Air Sniper slingshot is built out of aircraft aluminum with a pistol grip body that makes it very comfortable for your hand. It also many penetrating holes that allow you to attach lanyards or other gear such has knives.

Each fork will also rotate so you can accommodate literally grip as you see fit. The entire slingshot weighs only a half pound, so it’s a perfect choice for keeping stowed away in your backpack without noticing it. 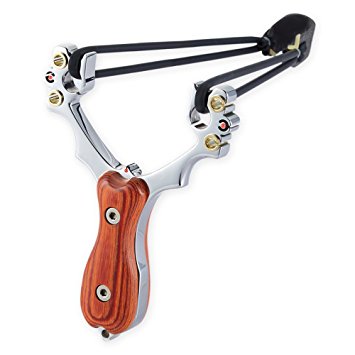 This is a solid choice for both novice and professional slingshot users alike. It uses two high quality rubber band and has a stainless steel frame, with a weight of around twelve ounces.

The bands that come with the slingshot are rather stiff, so some users of the slingshot report that they like to purchase less stiff bands separately. 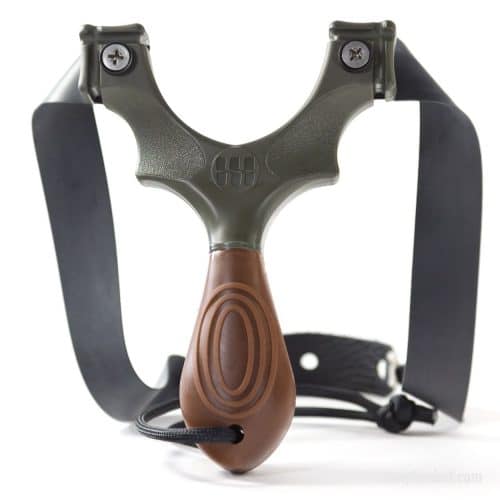 The Scout Hunting slingshot is built with a glass filed nylon construction, which makes it a very durable and resilient model with the ability to withstand heavy duty use. It utilizes latex bands with a premium quality leather pouch.

Overall, this isn’t the best choice of sling shot for beginners but it is a truly excellent option for people who are more experienced with the weapon. The indents in the slingshot also allow for a wide variety of different attachment options and bands.

The Torque Slingshot is affordable, lightweight, high quality, and made in the United States. It’s also fully ambidextrous and designed to easily accommodate both right handed and left handed shooters.

Users have also reported that it is very comfortable and easy to use. All in all, this is a great choice for a beginner slingshot.

The Trumark FS-1 slingshot is one of the most popular slingshots ever made. It utilizes a plastic wrist guard for comfort with a solid and inexpensive frame. The tubing is not the strongest on the market, but fortunately it’s not anything that you can’t easily swap out on your own.

As with the Torque slingshot, the Trumark is a great choice for beginners. The aircraft aluminum build quality is weather resistant, while the wrist guard itself will fold up so you can easily carry it in a bug out bag or a backpack.

When it comes down to it, the slingshot is a versatile tool that deserves more credit than it receives. Slingshots are a particularly good choice for anyone who are not comfortable with using firearms and/or those who do not have the strength to wield a larger weapon.

But as with any tool or weapon, proficiency with the slingshot comes only with practice. Sure, it can be a very effective hunting and defensive tool, but it won’t be if you’ve never used one before.

The slingshot may be one of the simplest weapons on the planet, but it’s also a skill based weapon.