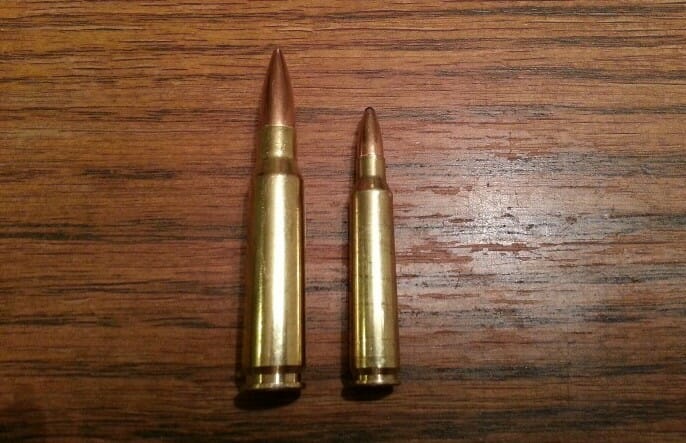 There are many debates that have long been going on in the gun world, and one of the most fiercest has been whether the AR-15 or the AK-47 is the superior tactical rifle.

Both of these rifles have a very rich history in both military and civilian hands, and the respective followings they have are die hard and loyal.

Choosing between these two weapons, however, may not be so much an issue of which rifle is superior but rather which caliber is superior.

The purpose of this article is not to settle the debate between these two rifles and their respective calibers, but rather to present you with some information about the two so you can make the decision for yourself as to which one you need.

Let’s start by learning a little about the history of these two calibers:

The 5.56x45mm NATO round was developed because the United States was looking for a lighter caliber to replace the 7.62x51mm NATO (which was almost identical to the .308 Winchester round) that they were using in their issued M14 rifles.

The 7.62x51mm was an effective round to be sure, and the .308 remains the most popular centerfire rifle caliber today. But it was also heavy, produced high recoil, was uncontrollable in fully automatic, and the M14 itself was too unwieldy for close quarters jungle combat in Vietnam.

The solution the military came up with was to adopt the M16/M4 series of rifles, and with it, the 5.56x45mm NATO round (which is very similar to the .223 Remington).

The individual infantry soldier could carry more 5.56 ammo on his person at once, and the caliber also produced lighter recoil even if it had less range and power than the 7.62x51mm round. 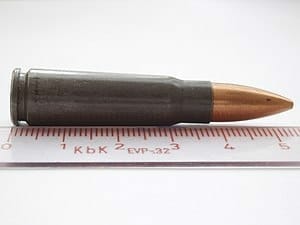 The 7.62x39mm round was developed in the 1940s in the Soviet Union, who were also on the prowl for a new semi-automatic service rifle to replace the venerable Mosin Nagant in 7.62x54R.

The 7.62x39mm was designed to be an all-purpose, intermediate round that would fulfill a variety of roles.

Two of the most popular rifles chambered for the round are the SKS and the AK-47, the latter of which was adopted into service by the Soviet Union and became the most prolific military rifle of all time.

Velocity refers to the speed of the bullet, or in other words, how fast it reaches your target. 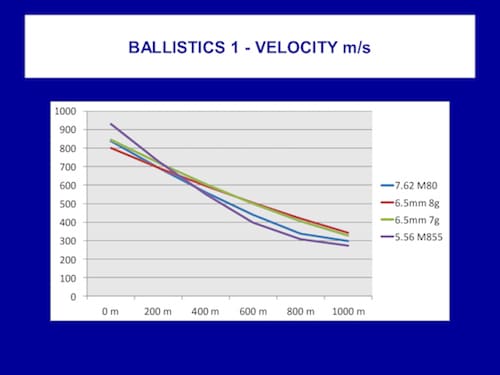 Generally speaking, higher velocity is a good thing. Not only does it means it will strike your intended target faster, it also means there are less factors at play that could throw your bullet off. Greater velocity also typically equals superior penetration and expansion.

And when we look at the 5.56 and 7.62, there is absolutely no question that the 5.56 is the faster bullet. It’s a lighter round and yet has a very similar powder load, and therefore there is more velocity when it exist the barrel.

But does this mean that the 5.56 is the superior round? Not necessarily. The 7.62 may not be quite as fast, but that doesn’t mean it’s slow.

Recoil is a major factor when choosing which caliber to use, because it determines the controllability of your weapon and how well you can get accurate follow up shots off. 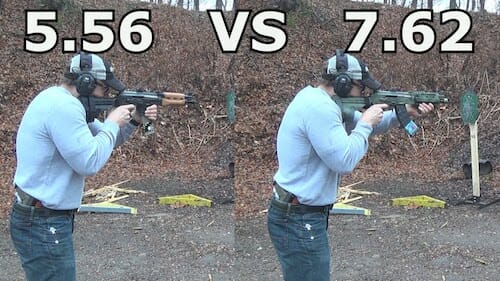 While the recoil of the two calibers, at least to you, may be based on your perception of them, we can scientifically measure the recoil of any caliber through feet per pound. This doesn’t tell you what the ‘felt recoil,’ of the round is, but it does tell you the recoil energy of the round.

The 7.62 generates a small number of more pounds of force than the 5.56, and the felt recoil should be slightly greater for more shooters as well. The only time this would be an issue is when you are firing successive rounds.

Both calibers, however, produce under ten feet per pounds of energy, and both are controllable.

There are a few ways to determine the stopping power of a bullet, but the two most prominent ways are their energy and their penetration. 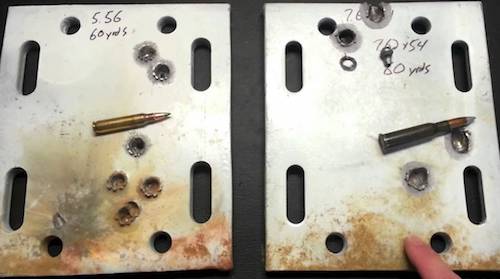 The 7.62 has lightly greater muzzle energy than the 5.56. While the 7.62 on average produces kinetic muzzle energy of 1,500 feet per pound, the 5.56 will produce around 1,300. Not a huge difference, but a difference nonetheless. This means that your target will be struck with more force from the 7.62 than the 5.56 NATO.

As far as penetration is concerned, it really depends on the specific type of bullet that you are using.

What we can say is that the 7.62 is the heavier round, but the sectional densities differences are still very minimal. Again, it really depends on the type of bullet.

Generally speaking, the consensus is that the 7.62 has a slight advantage over the 5.56 in terms of stopping power, being a larger and heavier round and more ballistically similar to the .30-30 Winchester round.

The 5.56 was actually chosen by the military because of its tendency to wound an enemy soldier rather than kill, which takes two people out of the fight rather than one because in addition to bringing down the wounded man, you’ve also distracted one of his comrades who will run over to help him. 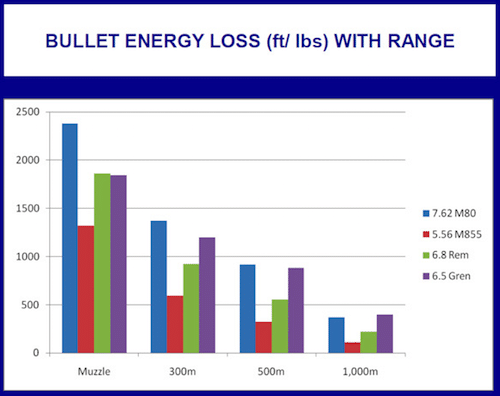 Well, when we look at the calibers, data does show that the 5.56 is slightly more accurate. As we have noted previously, the 5.56 produces more muzzle velocity. But furthermore, it also typically has a flatter trajectory over longer distances, which would lend itself to superior accuracy.

That being said, both calibers are suitably accurate for the battlefield, and you should have no trouble hitting your targets with a properly sighted in rifle out to a hundred yards or so. Accuracy can be greatly increased by using an AR-15 scope.

Both the 5.56 and 7.62 are popular rounds and reasonably priced, but there is undeniably a greater selection of bullets to choose from with the 5.56. 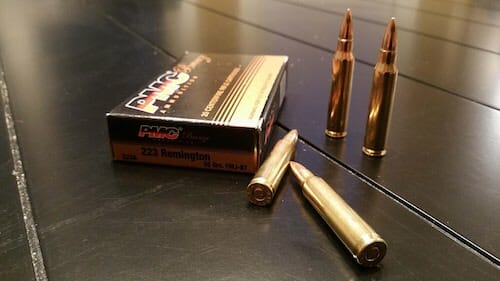 Not only are you slightly more likely to find 5.56 in a sporting goods store, you’re also going to find many different types of ammunition for the 5.56, while your choices will be a little more limited with the 7.62.

You can be the judge of that, but what we can definitively say is each of the following:

Based on that above information, you should be able to make a decision for yourself.

Or, if you have the funds available, you can take the easy road and go with both.

Thanks for reading guys and remember to get ear protection for shooting when practicing with any firearm.