Reflex sights perfectly represent the changes in firearms technology, military tactics and civilian needs. As optics became mainstream in the police and military worlds realized they needed something without magnification for close quarters use.

This developed into a need for optics that allowed shooters to shoot fast and accurate. What developed was reflex sights.

Reflex sights give shooters the ability to shoot straight and fast. The reticles are often simple and allow the shooter to simply put a dot on target and pull the trigger. Reflex sights are used by both military and police units, as well as civilians for home defense.

They’ve also found their way onto hunting rifles for brush hunting, and in action shooting like 3 Gun. Today we are going to break down red dot sights as well as suggest our top 5 reflex sights.

Red dots are simple. They are a tube or a square lens with a laser being emitted from behind the objective lens. This gives the user a very simple, but effective red (colors vary) dot as an aiming reticle. The simple red dot is easy to use. Put dot on target and pull the trigger.

Why A Reflex Sight

Reflex sights are simple devices that are both more accurate and faster to use than iron sights. Unlike a standard variable scope they feature 0 magnification.

These 1x optics are typically shorter and lighter than a standard optic. A reflex sight can serve a variety of roles, as long as those roles involve close quarters shooting.

Most reflex sights are limited to 200 yards or so in the standing position. Of course shooter skill level is the true measure of an optic’s effectiveness. Some reflexive sights can be combined with magnifying devices to increase their effective range.

What guns are best used with a reflex sight? That’s easy, any gun that’s not going to be used for precision shooting or long range shooting.

On a modern carbine like the AR 15 a reflexive sight can be used for quite efficiently. On close range weapons like a shotgun a red dot is the best possible optic choice. 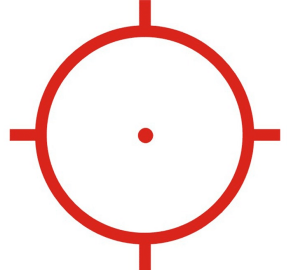 Reflexive sights can even be used on handguns. These are known as miniature red dot sights.

When you picture a reflex sight you are likely picturing a full sized model. They are roughly the same height and width as a standard variable scope just a lot shorter.

These optics are so small that when mounted to a handgun they can still be carried concealed. Miniature red dots can also be used as a backup option with a standard variable optic.

Meaning you can be rocking a 6-24x optic for long range shooting and have a miniature red dot mounted to the optic or on an offset mount for close quarters shooting.

When selecting a reflex sight there is a few features we’ll go over quickly to help you find a quality model.

Reticle Size – Reticle size for red dots is measured in MOA. MOA is important to consider when you choose a weapons platform or have a particular intention in mind. The larger the MOA the better suited the optic is for shooting at fast at close ranges.

The larger the reticle the faster it is for you to pick it up with your eyes. Smaller reticles are used for longer range shooting because they cover less of the target.

Batteries – Whenever we talk tactical electronics we have to consider the battery type. You generally want to choose a common battery source that’s easy to find.

Ruggedness – Depending on your end goal you really need to consider just how reliable and rugged your optic is. Can it take a place of water? Can it be fully submerged? How does it deal with shock and recoil?

While a warranty may cover a lot of issues the last thing you want is for your optic to die when you need it most. Research it folks.

Magnifier Compatibility – Not all reflex sights are going to be completely compatible with a magnifier. A little research goes a long way.

If you never intend to purchase a magnifier you won’t need to worry about this. If it seems like a future consideration go ahead and make sure your reflex sight will rock and roll with a magnifier.

Our Picks for Top Reflex Sights

The Trijicon MRO is one of Trijicon’s newest sights introduced just a few years ago. The MRO is a compact reflex sight that utilizes a 2 MOA red dot reticle. It has a 25 mm objective lens and is made of aircraft grade aluminum.

The Trijicon MRO has 70 MOA worth of adjustment and weighs only 4.1 ounces. The system is powered with a CR2032 lithium battery that can last for 5 years of continuous use.

It’s a Trijicon so its built to be a tank! The Trijicon MRO can be submerged to 30 meters and keep kicking. It can withstand the recoil of shotguns, rifles, and more. You won’t need to worry about banging it around.

The MRO also features a variety of different settings. You get 5 standard daylight settings, 1 super bright setting, and 2 night vision settings. The Trijicon MRO is lightweight and compact yoo. It’s only 2.6 inches long and its tall enough to co witness with AR height sights.

While the Trijicon MRO is built to last and is an absolute tank its not a cheap optic. Trijicon is well known for their quality and the high price isn’t a big surprise. This optic is compact, but will function with a magnifier. Read our full review here. 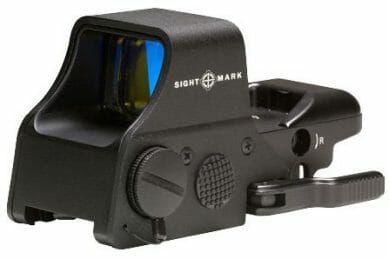 The SightMark Ultra Shot Plus is a compact optic that uses a square viewing window that is 33×24 mm. This makes it a full sized optic. The SightMark runs off a single CR123A battery and will last up to 1,000 hours.

The SightMark has a built in mount and offers shooters 4 different reticles. These reticles include a 5 MOA Dot, a 3 MOA dot, a 50 MOA circle and dot and a 50 MOA Crosshair.

The price on this optic is hard to beat. It’s surprisingly well made for the price too. It’s weatherproof so it can take a light splash of water, but can’t be submerged. The optic can even handle the shock of firearms up to 50 caliber.

It’s made from aircraft grade aluminum, and features a tough little finish. The 5 brightness settings are all for daylight shooting. If you’re shopping on a budget I doubt nightvision is a major consideration. Surprisingly this optic is also compatible with a magnifier.

The SightMark ultra shot optic is a great reflex sight for the money. However, this isn’t one i’d trust my life to. It’s tough, but not completely waterproof. It’s best suited for plinking, or on a budget 3 gun setup. 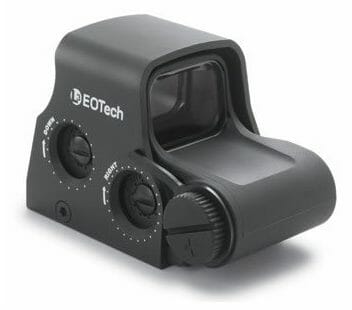 The XPS3 is a compact optic in size, but offers a full sized viewing window. It weighs only 9 ounces and is only 3.8 inches long. It offers 20 daylight brightness settings and 10 night vision settings.

This gives shooters plenty of options. It utilizes a single CR123 battery and functions for 600 hours of continuous use. It’s completely shock and water resistant. It can be submerged up to 33 feet. 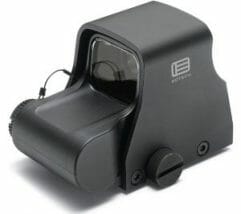 The Eotech brand is the grandaddy of holographic weapon sights. There square viewing window layout has become synonymous with the Eotech brand.

The XPS3 is one of their newer optics that is refinement of the original holographic rifle optic. The XPS3 is smaller than a standard Eotech, but offers the same size viewing window of the full sized models.

It uses Eotech’s famous reticle that’s designed to be used at both bad breath distances and out to 200 yards. The circle and dot reticle is extremely functional and much more versatile than a red dot. 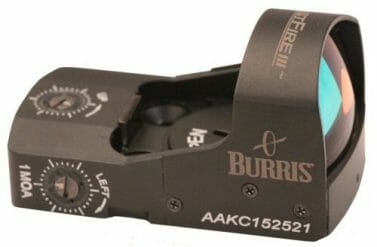 The Burris Fastfire 3 is a miniature reflex sight designed to be as compact as possible. It’s objective lens is semi rectangular and only 21x15mms. The optic itself weighs a mere 1.5 ounces with picatinny mount and .9 ounces by itself. 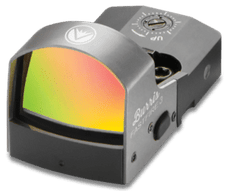 This teeny tiny optic is extremely well made and built to last. Tossing it on a handgun gives you a variety of advantages over simple iron sights. The Burris FastFire 3 also features top of the optic battery access.

Too many miniature reflex sights make you remove the optic to change the battery. No thanks, I hate rezeroing my gun. The FastFire 3 also uses a common screw pattern that makes finding adapters and plates for handguns simple.

The automatic adjustment setting had me cautious at first, but after a few trips to the range I was in love with it. The optic is well built and well thought out.

This optic is more or less aimed at being a backup optic or a competition handgun optic. It would be great for home defense, but I’d be reluctant to take it to war or on the beat.

It’s strong, but go to war strong is completely different. It’s also pretty affordable, and the best option if you want an affordable and reliable handgun optic. 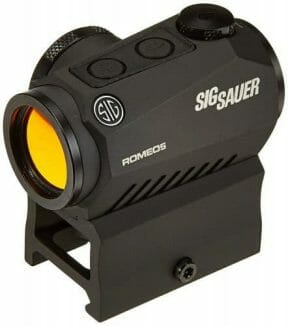 The Sig Romeo 5 is a new optic, but packed with features. It has a 50,000 hours battery life, that’s enhanced by it’s motion detecting on and off setting. The 2 MOA dot is for precise shooting and it has 8 daylight brightness settings and 2 night vision settings.

It’s sealed against water and can be submerged up to 1 meter. The optic is also shock and fog proof. The Sig Romeo 5 features a 20mm objective lens and weighs only 5.1 ounces.

The Romeo 5 is slammed packed with features I love and its priced at under 200 dollars. This is the cheapest reflex sight I’d ever suggest for duty use. It’s a stud in a home defense situation to.

The MOTAC setting powers the optic up when it senses motion and powers down after a period of stillness. This means as soon as you grab your rifle the optic is on. No fooling around with on/off switches in the middle of a firefight.

Outside of that the optic is built to last and compatible with both magnifiers and night vision devices. Sig knocked it out of the park when it came to the Romeo 5.

This optic is small, so it doesn’t offer a massive objective lens. When it comes to cowitnessing the front sight will take up a lot of optic space.

Reflex Sights represent a growing portion of the optics market. They offer advantages over both iron sights and variable optics when it comes to close quarters shooting.

In my opinion it’s much easier to start a new shooter with a reflex sight than even iron sights.They are also perfect if you have poor eyesight. Reflex sights are quite versatile and are one of the optics I always suggest  to beginners.

The key of course is finding a good one, but that’s why we’re here. Follow our above guide, or go with any of our suggestions and you’re bound to succeed.