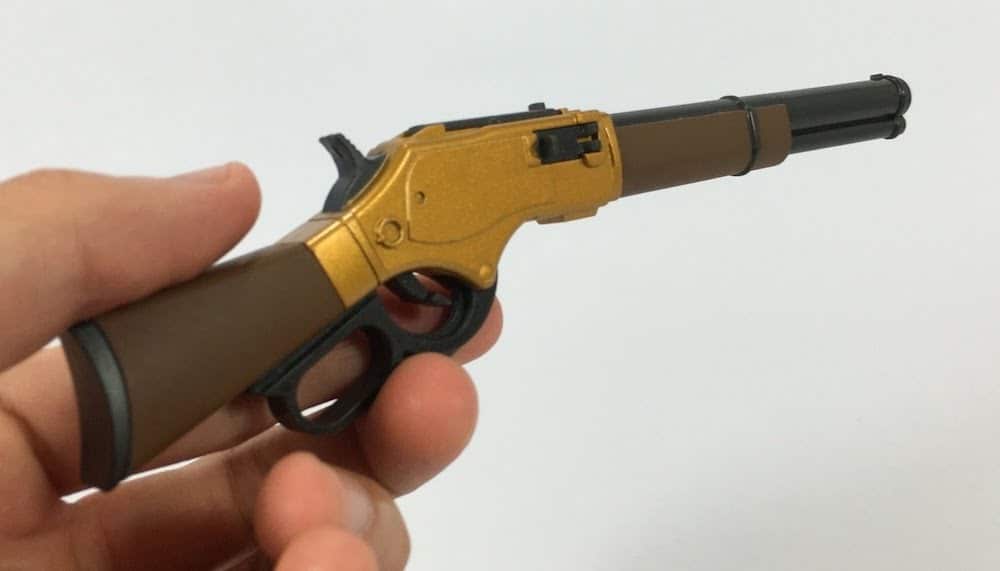 I love the weird, the odd, and the crazy guns that the world seems to forget about. It doesn’t need to be effective to catch my eye.

Crazy guns are rarely successful guns, but that doesn’t they shouldn’t be celebrated! Well, maybe not celebrated, but at least gawked at. So let’s gawk at the 10 crazy guns that never were. 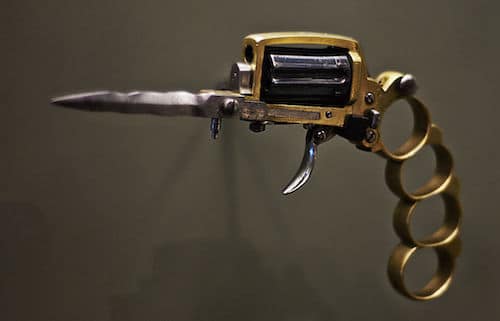 Have you ever decided that sometimes shooting a person wasn’t enough? Maybe you need to punch and stab them? Well then the Apache is for you. If a 7mm pinfire revolver with basically zero barrel and no sights doesn’t work then the little weapon comes with a knife and brass knuckles. The problem is the Apache is a shooty, stabby, punchy thing that doesn’t do any of those tasks well.

It does fold into a small, pocketable design. This apparently made it a favorite of criminals, or so legend states. I can’t find any actual evidence of these things every being used by anyone, including criminals.

The guns were apparently made in small numbers for 9 years, but only a handful of examples exist. These aren’t my cup of tea, but maybe you are the type who needs the ability to poorly cut, stab, and punch a target. I’m surprised with the rise of EDC culture we haven’t seen a modern version pop up. 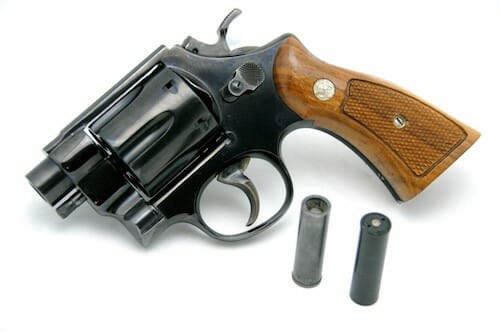 The Vietnam war was an interesting time for firearms technology. It was this war the United States started taking suppressor technology seriously. The Quiet Special Purpose Revolver was produced to be a gun for tunnel rats.

Tunnel Rats were soldiers and Marines who were tasked with clearing the tunnels the VC used for hiding. The QSRP was a smooth bore 40 cal S&W Model 10 revolver that was integrally suppressed.

This reduced flash and noise and fired a handful of pellets. This revolver functions more like a shotgun than a revolver. This made it perfect for close quarters combat that tunnel rats encountered in tunnels. The guns were fielded and relatively successful.

They had a few issues and in the process of refining them the funding was cut as the war effort lost support. The Guns could have been a major success, but we weren’t faced with widespread tunnel warfare after the Vietnam War. Four examples of this gun currently exist, including two in the US Army museum.

Another project dealing with suppressed warfare in Vietnam was the Silent Sniper Rifle. The goal of this project was to produce a rifle that was completely inaudible past 100 yards.

To do this the rifle incorporated a massive integral suppressor and a massive thumper of a round. The round was called the 458 x 1.5 and was custom produced for this rifle. It was subsonic and quite powerful.

This rifle was sent to the Vietnam Sniper School with the 23rd infantry division during testing. The rifle itself met its goal of being silent, but not much else. Reportedly it was not very accurate and the 11 pound weight of the rifle made offhand shots difficult.

The 6 rifles were sent back to the states and from there it’s anyone’s guess where they went. The massive, goofy looking guns were interesting, but wasn’t the Silent Sniper rifle the military needed. 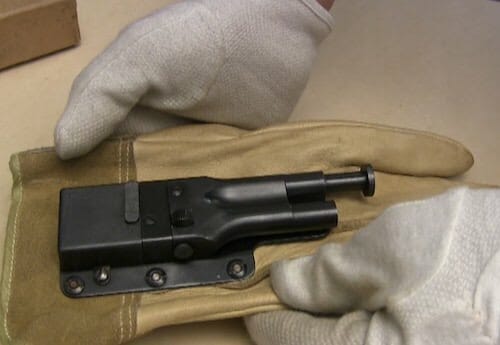 Have you ever been stuck on a faraway pacific island clearing brush to help build a runway when suddenly a guy tries to start killing you? Well, if you have the Sedgley Fist Gun was for you. Designed by Captain Stanley Haight the Sedgley fist gun was a gun built into a glove and designed for Marines and Sailors working to clear away brush and build camps.

There was an issue with hidden enemy soldiers willing to fight to the death. Marines and Sailors working may not have a gun in hand, so the glove gave them one powerful punch.

The Sedgley Fist gun was a smoothbore 38 Special pistol and was fired when the wielder punched their target. The gun was famously featured in Inglorious Basterds in the Hitler assassination scene. Anywhere from 52 to 200 were produced and its unlikely any where ever actually issued.

Those crazy Russians have designed some truly odd weapons. Some are genius, some are crazy, and some are a little in between. Today we are looking at the latter. This design comes from a man named German Korobov, a Russian arms designer who produced tons of odd, but effective weapons.

Today we are looking at the TKB 059. This was basically a bullpup rifle with three barrels, and fed from a 90 round, 3 feed magazine. Even barrel was fed independently and the gun fired the famed Soviet 7.62x39mm.

Why does a gun like this exist? Maybe because double taps are for sissies. Real men triple tap! I don’t see a purpose outside of being something unique and imaginative. The magazines were heavy and cumbersome, I’d imagine the recoil was rough, and muzzle rise plentiful. The weapon was never fielded, but the prototype resides in the Tula Arms museum in Russia. 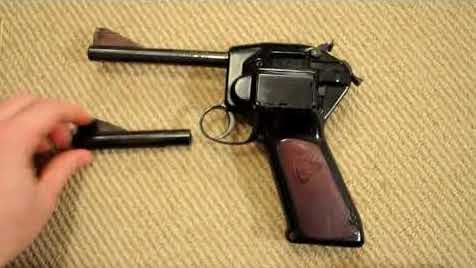 The revolver had 3 v shaped cylinders and the cylinders picked rounds up, and ejected them. The magazine itself was fixed, and reloaded through a gate on the side of the grip.

That’s not where the weird ends either. The rounds were triangular in shape and called trounds. You could also easily swap the Dardick’s barrel and change the caliber in just a few minutes. There was even a rifle conversion kit that was equally easy to install. The Dardick was odd, and ultimately unsuccessful gun.

Some models are still for sale on the open market, but they are extremely expensive. Live trounds are equally expensive. The Dardick had some unusual ideas, but unfortunately a standard magazine fed automatic pistol was a much better choice.

The American 180 is likely the most successful gun on this list, but it never saw widespread success. It made its way past the prototype stage and a few models even exist in private hands.

This rapid fire, low recoil gun was actually designed by Dick Casull, who later designed incredibly successful revolver rounds. The gun was designed for police use and offered police a easy to control gun that minimize the chance of ricochets, over penetration and offered a high hit probability. The American 180 did find some limited success with police and prison forces, but ultimately failed to attract enough attention to succeed.

The Winchester Liberator was one of those Cold War anti commie guns. The idea behind it was to produce a cheap, but durable, powerful, and dependable weapon that used common ammunition for use in the hands of anti communist insurgents.

The Liberator was essentially a derringer that fired from 4 barrels and was chambered in 20 gauge. The Liberator was made from a combination of zinc and plastic and could be made for less than 20 dollars.

The Liberator functioned, but failed to draw the attention of the right people in the Department of Defense. It’s intimidating designs looks like something out of a cyber punk dystopia, and not something from the Cold War.

The Liberator design evolved and became a 16 gauge weapon with a folding stock, and eventually a 12 gauge variant. Unfortunately the design never succeeded and the designed moved on to create the COP derringer. 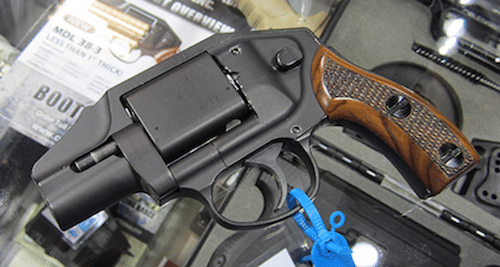 This is the most modern gun that never was, and I’m not sure why it never was. The MDL 38-3 is kind of a dumb gun, but production went as far as being shown at Shot Show. The MDL 38-3 is a revolver that claimed to be the slimmest revolver on the market.

As someone who likes dumb guns I would have ate this up. It’s a 3 shot revolver with a very flat cylinder. It was less than an inch thick and packed 3 38 Special rounds.

The MDL 38-3 was likely unsuccessful because guns like the Ruger LC9 and Walther PPS were roughly the same width and packed 2 to 3 times the ammo of the MDL 38-3. One cool feature is the barrel is aligned with the bottom cylinder, which would help make the gun more controllable. The gun certainly looked cool, and at the right price I bet it would have failed miserably… 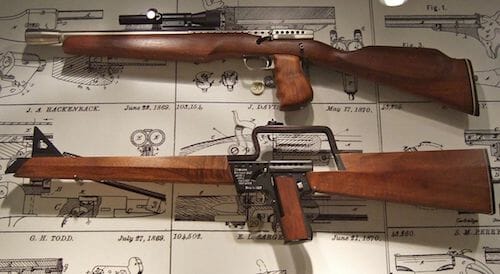 Finally, we end with the most bizarre concept for a gun I’ve ever seen. The Gryojet design philosophy must have been, “It’s like a gun powered by rockets.” The Gyrojet didn’t fire traditional bullets, but instead fired small rockets called Microjets.

The Gryojet company produced both rifles and pistols that was an odd combination of both rocket science and wooden furniture. These guns really look like something out of Buck Rogers.

The guns proved to be a mess. They were often inaccurate, reloading was not intuitive, and the guns were cumbersome in general. They were tested by the U.S. Army, but didn’t find any favor there.

The Gryojet was doomed from the start, but at least the designers showed original thinking. The thinking was so original that no one thought of it before, or after…

So these are my ten crazy guns that never were. Is there any I’m missing? Any you think are crazier? Let us know below.