An Overlooked Gem: The Beretta Px4

Think of the name Beretta, and there is likely one gun that comes to mind first: the 92FS or M9.

The 92-series of pistols is without a doubt the gun that Beretta is most well known for. It’s certainly easy to see why: the 92 is iconic, attractive, robust, accurate, reliable, and battle proven. It has faithfully served as the sidearm for militaries and law enforcement units from all over the world.

But there’s one Beretta pistol that has been tragically overlooked despite offering many of the same features of the 92 as well as some improved ones: the Beretta Px4 Storm.

The Px4 is notable because it combines the rotating barrel of the Beretta 8000 with the trigger/safety system of the 92/M9. At the same time, the Px4 has a completely different outward design from either pistol.

Introduced back in 2004, the Px4 has already found service with numerous law enforcement agencies and militaries across the globe, even if it hasn’t attained near the popularity of the 92.

Nonetheless, this doesn’t mean that the Px4 is a weapon you should look over. On the contrary, it’s a very fine pistol on today’s market with a number of design details that are not found on any other pistol.

Design Details Of The Px4 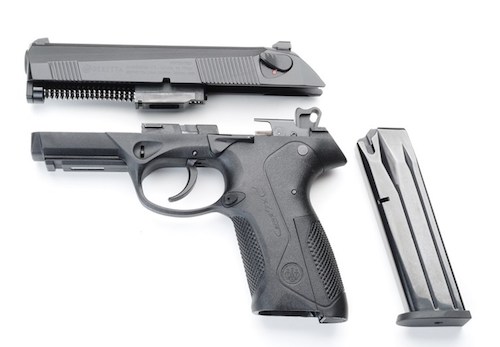 The most notable design feature of the Px4 is its rotating barrel, which was brought over from the previous Beretta 8000. The rotating barrel means that quite literally, when the slide is pulled to the rearward (or moved forward), the barrel rotates. This rotating barrel system stands in stark contrast to the far more common Browning lock-up system.

Why the rotating barrel?

According to Beretta, the rotating barrel makes the Px4 easier to shoot because it tames the recoil. When the weapon is fired, the recoil is transferred to the sides of the firearm rather than back into the shooter’s hand. 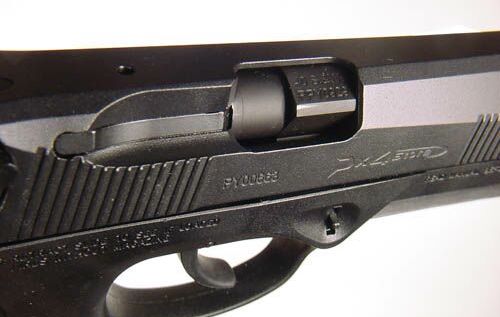 This system truly is unique to certain Beretta firearms, and since the 8000 is no longer in production, the Px4 (and its many variants) is the only pistol on the market today with this system, which is pretty cool.

Otherwise, the Px4 is a traditional polymer framed DA/SA handgun. The rotating barrel may have been brought over from the 8000, but in terms of the trigger and safety design the Px4 is just like the 92FS.

The first shot is double action and all subsequent shots are single action, while there are ambidextrous safety levers on both sides of the slides that also act as a decocker when pressed down. This means that the Px4 cannot be carried locked and locked, like the 92FS.

A firing pin block is engaged when the safety and decocking lever is depressed, to prevent the weapon from firing when it is decocked, much like the 92FS as well.

It should be noted that there is a G-model of Px4 Storm that only has a decocking lever and not a safety. 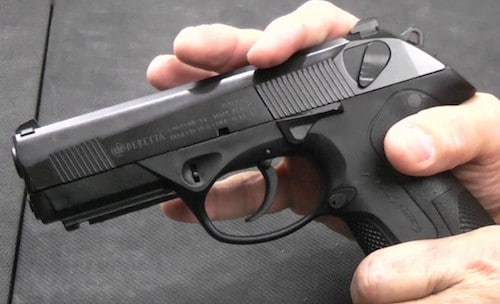 There are certain DAO models of the Px4 designed for law enforcement use and that also float around on the civilian market. These models of the Px4 only have a double action trigger (for a longer but more consistent trigger pull) and lack the safety/decocker levers.

While the frame of the Px4 is polymer, it is also reinforced with fiberglass for extra durability. The frame also sports a Picatinny rail to add lasers, lights. The metal components of the pistol are finished with Beretta’s trademark Bruniton finish, which is very corrosion resistant and is also used on the 92FS/M9.

Finally, many components of the Px4 are interchangeable and removable. Examples include the magazine release (which can be reversed for left handed shooters), the back straps on the grip (small, medium, and large), and the slide release lever can also be replaced with a smaller version to reduce the chances of it snagging.

Variants Of The Px4

As was noted above, G-model and DAO versions of the Px4 are available. 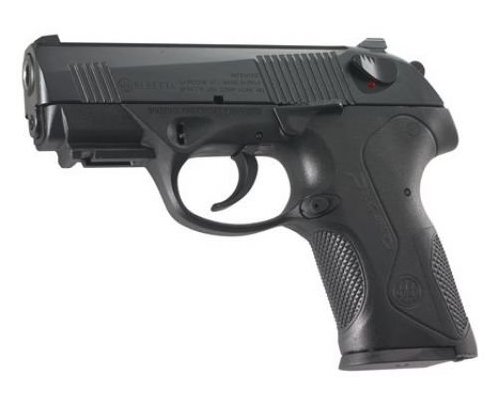 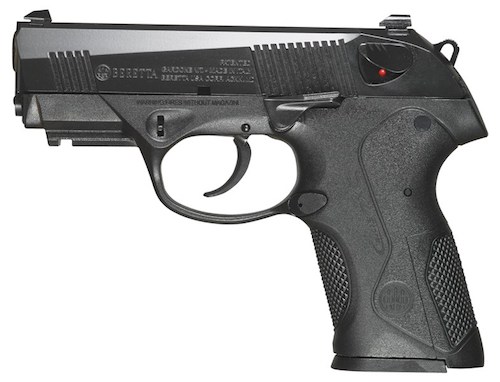 The Px4 Compact holds 15+1 rounds of 9mm, while the .40 S&W versions holds 12+1 rounds. A .45 ACP is not available with the Compact. The Px4 Compact will also accept the larger magazines of the full size Px4, even though they will protrude beneath the grip.

A G-model Px4 Compact is also available in the form of the Px4 Compact Carry. This version of the Px4 Compact also has a lighter and smoother trigger pull, a competition-style hammer, larger magazine release button, orange tritium night sights, and a talon gip wrap for better texture.

The last major version of the Px4 is the Px4 Subcompact, which is similar in size to a Glock 26. Unlike the full size and compact models of the Px4, the Px4 Subcompact does not utilize a rotating barrel design and instead uses a tilting barrel similar to other pistols such as the Glock. Otherwise, it resembles a Px4 Compact that has been shrunk even further. 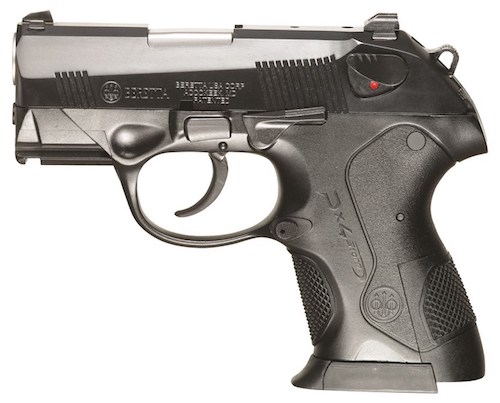 The Px4 Subcompact is available in 9mm or .40 S&W, with a capacity of 13+1 or 10+1 rounds respectively. Either will accept the magazines of either the full size or compact Px4. Just like the Compact model, a .45 ACP version of the Subcompact is not available.

Uses For The Px4

Beretta designed the Px4 as a military and law enforcement sidearm. It has currently found service with militaries and/or police agencies in the following countries: 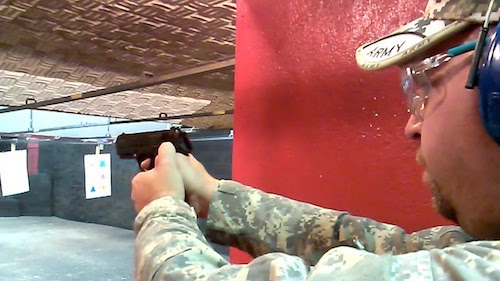 In the hands of a civilian, the Px4 would still fulfill many rules. The full size and compact models would both be excellent choices for casual target shooting, home defense, or as a pistol to have by your side in an SHTF/disaster scenario.

For instance, using the Px4 as a primary carry pistol on your hip and then having the Px4 Subcompact as a back-up piece in an ankle holster would certainly be a rock solid defensive sidearm. Even if something were to happen to your Px4, you could still use your spare magazines in the smaller model.

Specs of the Px4 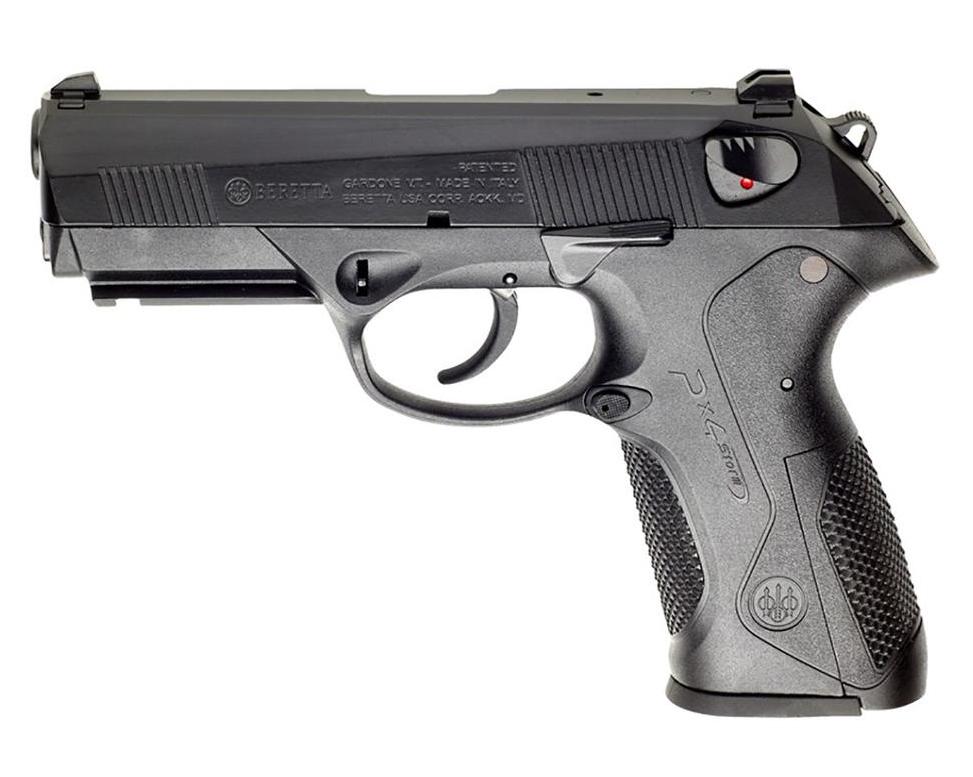 Here are the specs of the full size 9mm Px4:

In conclusion, the Beretta Px4 Storm represents one of the most overlooked service pistols in the entire world. It combines the innovative rotating barrel system of the 800 with the same trigger and safety system of the 92FS to create what is truly a unique pistol.

Whether it be for carry for home defense or for a pistol to have strapped to your hip when the grid does down, Px4 Storm is a quality weapon that does not deserve to be overlooked.

About Us | Write For Us | Advertise