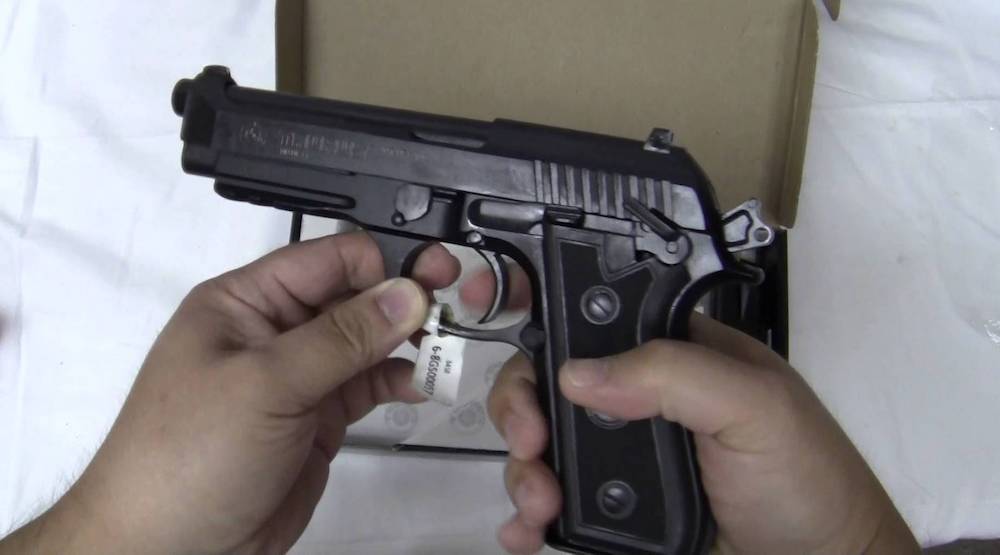 If you were to ask yourself what the most popular or best known service pistols on the market are, which specific makes and models of handguns come to mind?

Each of those are excellent handguns that totally deserve the reputations they have earned, but they’re also not exactly cheap. In fact, each of those handguns listed above will cost you around $500 or more. Some, such as the USP or P226, can fetch a price close to a full grand.

People who need or want a full-size service pistol but who presently lack the funds to purchase those kinds of weapons listed above may believe they have found themselves in a conundrum. Sure, there are cheaper handguns on the market, but they can’t be as high of quality as those pistols, right?

The truth is, there are a myriad of high quality and full size semi-automatic pistols that can be easily purchased for less than $400.

If you want a full size service pistol, and if you want to spend less than $400, you will definitely want to continue reading this article.

Here are the very best full size service pistols that you can buy for less than $400: 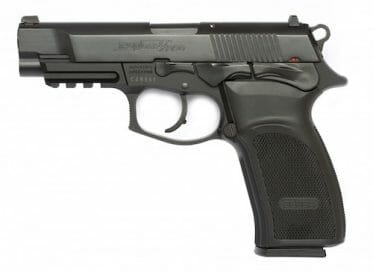 Though the Walther P88 is no longer in production today, the Bersa Thunder 9 most certainly is, and it can be easily purchased for less than $400.

Available in both a full size configuration with 17 rounds and a compact model with 13 rounds, the Thunder 9 is a short recoil handgun with a steel slide and aluminum alloy frame. It is available in a matte black, nickel, or two tone finish with polymer wrap around grips.

The magazine release is reversible, and the safety and decocking lever is ambidextrous. The pistol also features an internal lock that can be activated with a provided security key, rendering the pistol useless should you not want burglars or children to get their hands on it.

Currently serving as the duty sidearm for numerous South American countries, the Bersa Thunder 9 represents one of the most overlooked budget service pistols in production today. 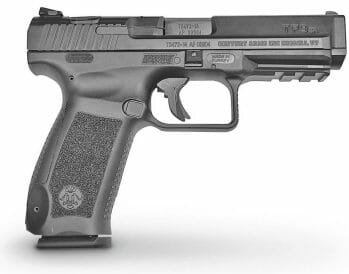 One of the most well known budget handguns produced today is the Canik TP9 series. Manufactured by Canik (pronounced ‘Janik’) in Turkey and then imported into the United States through Century Arms, the TP9 series is essentially a clone of the Walther P99/PPQ series of pistols. In fact, the 18-round TP9 magazine will work in the PPQ (the compact model holds 15 rounds).

Being a clone of the P99, certain models of the striker fired Canik feature a decocking button on the top of the slide and have DA/SA firing mode. Other models lack this feature with a SA only firing mode.

Canik pistols are routinely regarded as being some of the very best pistols on the market today that you can purchase for around $300. Each Canik pistol ships with a Serpa-like holster and a cleaning rod to provide you with a complete kit out of the box. 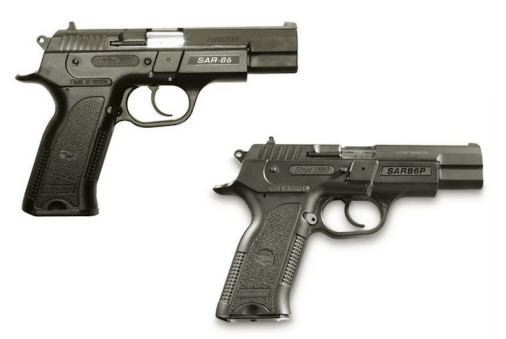 Here’s a gun that few people know about: the SAR B6 and B6P. Like the Canik, these are also Turkish-made guns, although they are imported into the United States through European American Armory, who also import the Turkish made guns.

The SAR B6 and B6P are both derived from the enormously successful CZ75 handgun. The B6 has a 16 round magazine and the B6P a 13 round magazine. The standard barrel length of the B6 is 4.5 inches whereas the B6P a 3.8 inch.

Both pistols are built on contract for military and police forces in Turkey, and are designed out of the factory to have an impressive 25,000 round service life. 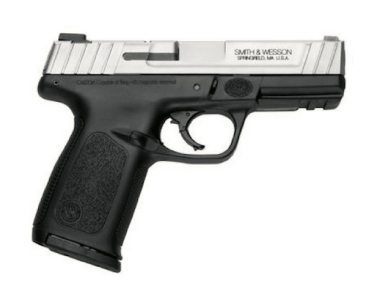 Nonetheless, Smith & Wesson refused to give up on the design, and the Sigma evolved into the SD9 9mm and SD40 .40 S&W of today. Needless to say, the SD series of pistols are far higher quality than the Sigma while also being repeatedly sold for less than $300.

Smith & Wesson specifically manufacturers these guns for beginners and those on a budget. These are polymer framed striker fired pistols with a stainless steel slide and a Picatinny rail for mounting lights or lasers.

The guns are DAO, which means that the trigger pull is a little longer than competing pistols on the market, though it’s not necessarily gritty. Standard capacity on the SD9 is 16 rounds and the SD40 is 14 rounds. 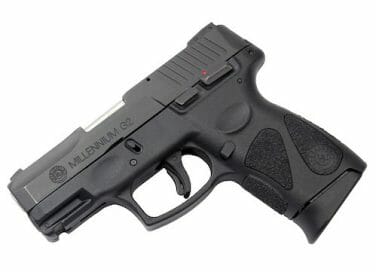 Okay, we’re kind of cheating with this one, because the PT111 G2 is a compact pistol designed mostly for concealed carry and not a full size pistol for duty use.

Nonetheless, the PT111 G2 is still worth mentioning because it truly is one of the best values of any handgun on the market. Furthermore, it’s a double stacked pistol with a 12 round capacity and is a little larger than single stack designs such as the Glock 43 or S&W Shield, and it could be used as a general purpose sidearm if need be.

The PT111 G2 is routinely sold at the $200 mark. It’s available with a blued or stainless steel slide and is a striker fired, polymer framed pistol with a manual thumb safety on the slide. It also has a security lock system just like the Bersa Thunder 9 we talked about previously.

All in all, if you’re on an extreme budget and if even $200 is pushing it for you. The Taurus PT111 G2 might truly be your best best. 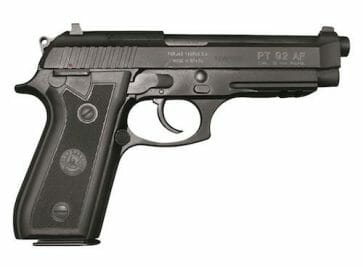 We should all be familiar with the Beretta 92FS. It’s one of the most recognizable and iconic pistols ever made. It’s also not cheap.

But a high quality clone of the Beretta 92 exists in the form of the Taurus PT92, and with one major improvement: the PT92 utilizes a frame mounted safety versus the slide mounted safety o the Beretta. This means that the chances of inadvertently engaging the safety while racking the slide are greatly reduced with the Taurus.

Furthermore, the PT92 can be carried cocked and locked because the safety and decocking positions are different, unless the Beretta.

The PT92 has a factory standard magazine of 17 rounds, though 15 and 18 round magazines from Mec-Gar are available. This is a full size duty pistol and while it is quite heavy and large for a 9mm, that also helps to tame recoil. The fixed barrel design also makes the PT92 a naturally accurate handgun. 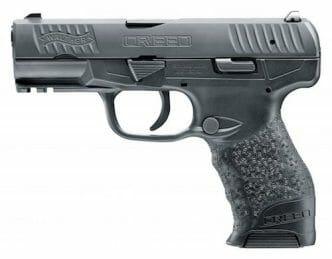 Last but not least is the Walther Creed. This pistol is essentially a development of the budget PPX pistol, which has since been discontinued.

The Creed is a hammer fired, DAO polymer framed pistol that combines the low price point of the PPX with the similar ergonomics of the famed PPQ pistol.

Coming standard with a 16 round magazine, the Creed represents an extraordinary value from Walther.

As you can see, there are numerous options for a full size or mid sized service pistol that you can buy for under the four hundred dollar mark, and sometimes for far less than that.

Any one of these pistols will be a great option for target shooting, for home defense, as a sidearm to have by your side in an SHTF/disaster scenario, or even for concealed carry if you want it to be.

The common idea that you have to spend between $500 or $1,000 for a high quality pistol is simply not true in today’s world. The guns that have been listed and discussed in this article prove that.