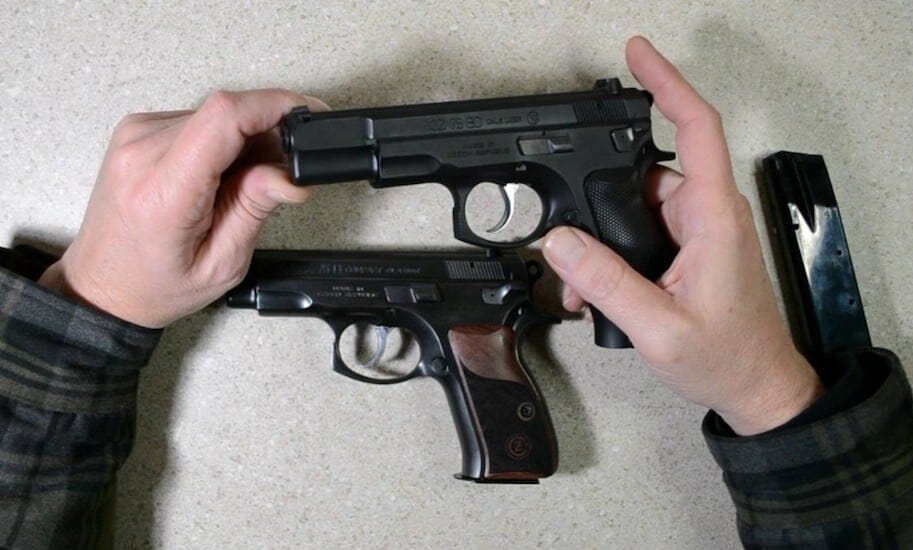 One pistol that really doesn’t seem to receive as much attention as it deserves, at least in the United States, is the CZ 75 9mm and its many, many variants.

The reason why this is unfortunate is that the CZ 75 is, without question, one of the world’s most successful pistol designs. It ranks up there with the 1911 and the Browning Hi-Power as being one of the most influential sidearms ever made.

In the four decades of the CZ 75’s existence, over one million have been produced, and that’s not counting the numerous clones of the weapon that exist from other manufacturers. Even if the CZ 75 is not as common in the United States, across the rest of the world, and particularly in Europe, it is one of the most popular pistols for civilians (where civilians can legally own pistols, at least), police forces, and military units.

The CZ 75 is also the archetypal example of what is called the ‘Wonder Nine’ pistol: a 9mm semi-automatic handgun with a double stack ‘high capacity magazine and an all-steel frame. These kinds of pistols really took the market by storm in the 1970s and 1980s and remain popular today even in the face of striker-fired designs.

Let’s outline and discuss the merits of the CZ75 pistol in greater detail, shall we? 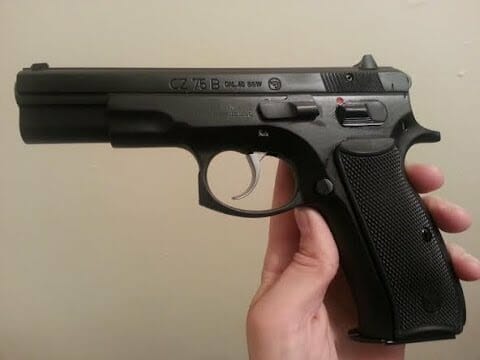 Benefits of the Wonder Nine

There are many benefits to the Wonder 9 pistol in general. Most notably, the long DA pistol also acts as a safety because it’s difficult to be depressed on its own. The weight from the all-steel frame also helps to tame recoil and make follow-up shots faster (and more accurate). The single-action trigger can be even lighter and crisper than the trigger on a modern striker-fired pistol such as a Glock.

Benefits of the CZ 75

But when it comes to the CZ75 specifically, it presents a very unique advantage of its own. Most notably, it has a rail system that runs across the entire length of the slide (the rail being where the frame hooks onto the slide).

CZ claims that his increases both accuracy and durability. It’s hard to argue against that since it’s not uncommon for CZ75s to have tens of thousands of rounds through them with absolutely no issues whatsoever.

History of the CZ75

How was the CZ75 pistol invented?

In a nutshell, it was invented by the Koucky Brothers in Czechoslovakia (the Czech Republic today). 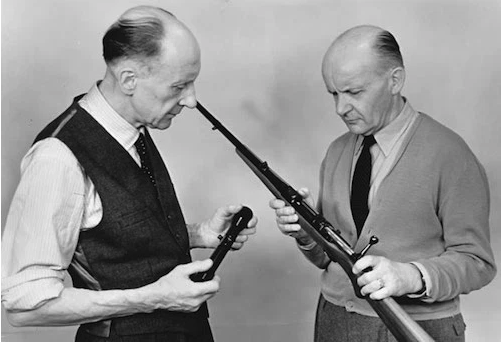 Specifically, they took the linkless locking system of the Browning Hi-Power and then improved the ergonomics, increased the magazine capacity, and turned it into a DA/SA autoloader rather than the single action design of the Hi-Power.

No, the CZ75 is not a ‘clone’ or DA/SA version of the Browning Hi-Power. The Koucky brothers were really just inspired by the Hi-Power and used it as the basis for developing their own gun.

In any case, the result was the most copied semi-auto pistol in history. Today, there are dozens upon dozens of different variants of the CZ 75, both from CZ and from different manufacturers, and in a variety of different calibers. 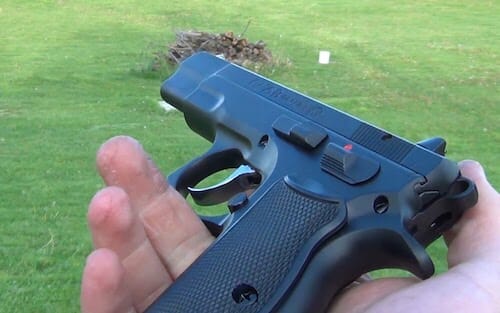 Like the Hi-Power, the barrel and the slide of the weapon are locked together with locking lugs that have been milled into the barrel.

Unique Aspect of the CZ75

A unique aspect of the CZ75 is how the slide is designed to ride inside the rails of the frame, versus on the outside of the frame. This results in the slide being held very tight to the frame and helps contribute to accuracy and reliability.

What Kind of Safety Does a CZ 75 Have?

The CZ 75 also features a manual safety and decocking lever, which are featured on the frame. The pistol can be carried cocked and locked, or with the hammer down and the safety engaged, so your first shot is a single action.

In contrast to this, other Wonder 9s such as the Beretta 92FS or the SIG P226 cannot be carried cocked and locked, so your first shot has to be the long double action pull with those two pistols.

The CZ75 also has a firing pin block, so you can safely decock the weapon by pushing the safety lever down. However, this decocking lever did not always exist with the CZ75. In fact, the original CZ75 lacked the decocking feature entirely.

As we mentioned there are lots of versions of the CZ 75 and they come in a variety of calibers.  Here are a couple of our favorites: 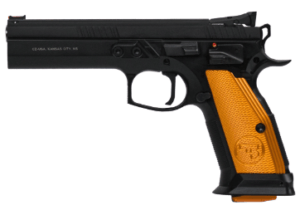 Chambered in a 9mm this CZ 75 does not looks badass, but it shoots it as well. This single-action pistol is perfectly weighted and balanced. The grip is slightly longer to accommodate a 20-round magazine. Comes with fixed rear sights and ambidextrous safety.   You can also get this CZ 75 in a .40 SW.
If you are in the market for a more compact CZ 75, we got you covered. 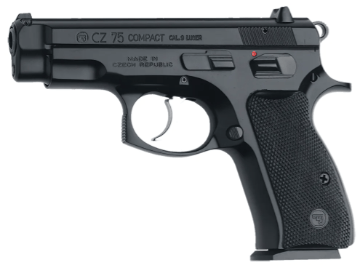 The Compact CZ 75 is appropriately named as it is only 5 inches tall. With a barrel just under 4 inches long. The compact version of the CZ 75 gives the carrier two options for carrying. Option #1 you can have the hammer-back with the safety on for single action operation.  Or manually decocked for a double action first shot with no need to remember to take off the safety before firing.

The 75 Compact retains the steel frame of the original 75. Only 2.4 oz of weight is lost. Making it the softest-shooting compact in the CZ 75 line.

Worldwide, the CZ75 is easily one of the most popular pistols in existence. But in the United States? Not so much.

The most popular pistols here in the states would be the 1911 and Glock, with the Beretta 92, Springfield XD, Smith & Wesson M&P, and SIG P220-series being the closest runner ups.

That being said, the aftermarket support for the CZ75 is still rather strong. Spare magazines, internal upgrades, triggers, and holsters are cheap and easy to find. An improved trigger in particular is something that many CZ owners will go out of their way to find. 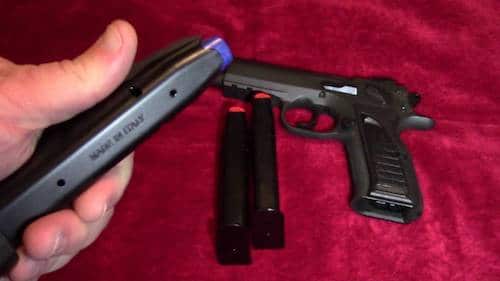 Some of the most affordable and highest quality aftermarket magazines for the CZ75 are made by Mec-Gar, who also produce magazines for a wide variety of other gun manufacturers as well.

Here are the basic specs of the basic model of the CZ75B: 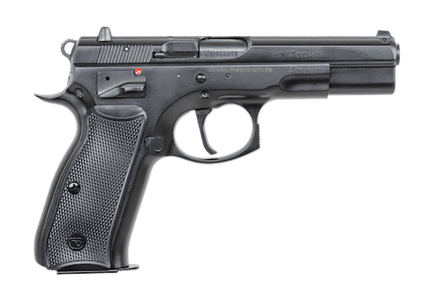 The CZ75 is a solid duty pistol and is without question one of the highest quality sidearms in the world. If it wasn’t, it wouldn’t have been copied as much as it has.

It’s heavy as a steel-framed pistol. While the DA/SA design may make it seem ‘outdated’ in contrast to pistols, it’s really just a matter of personal preference.

Available in a wide variety of models and configurations, the CZ75 is definitely a viable option for concealed carry (especially in a compact configuration), home defense, and as a sidearm to have by your side in an SHTF/disaster situation.

Complete Guide To The CZ-75

Right-handed Holsters For The CZ P07

Best Holster For The CZ P01

One thought on “CZ 75 – The World’s Most Copied Pistol”