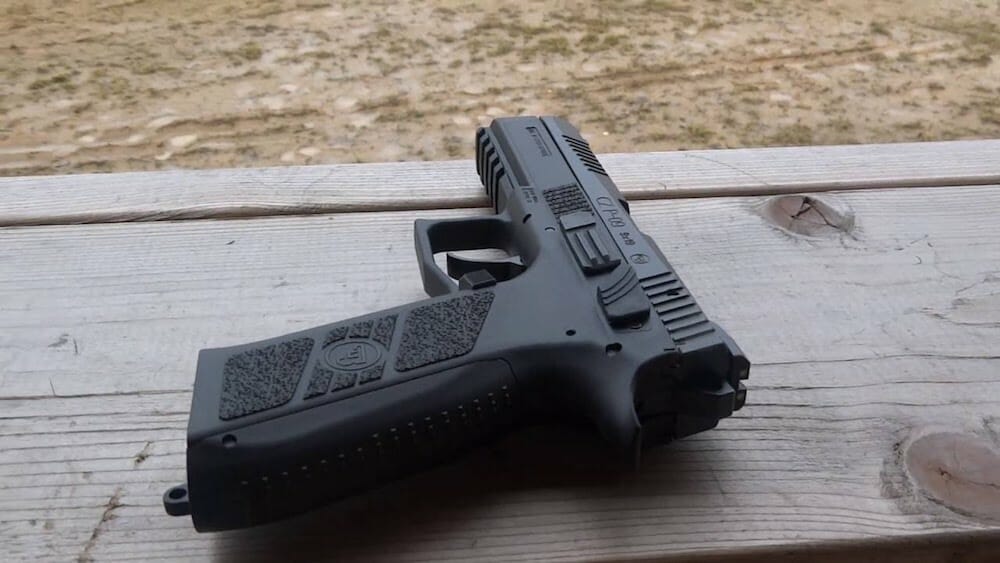 What are some full-size service pistols that you can think off the top of your head?

But what about the CZ75? Despite being one of the most acclaimed, popular, and widely issued pistols in existence, at least worldwide, it remains far behind in terms of popularity behind other pistols here in the states.

This is unfortunate because the CZ75 is, without a doubt, one of the finest pistols ever produced. One of the evolutions of the CZ75 is the CZ P09, a polymer framed pistol with an astounding 19+1 magazine capacity of 9mm Luger with the standard flushing fitting magazine.

While CZs may not be as popular as Glocks, M&Ps, or XDs, they still have a respectable following in the United States, and the fact that their pistols are so widely copied says a lot about the design.

Let’s talk about CZ and the P09 pistol in greater detail.

The CZ75 is one of the most classic examples of a Wonder-9 pistol: a metal-framed, DA/SA 9mm autoloader with a double stack, large magazine capacity.

Now imagine the CZ75 converted to a polymer frame with an enhanced magazine capacity, and you essentially have the CZ P09. In other words, the P09 is essentially a modern evolution of the CZ75. 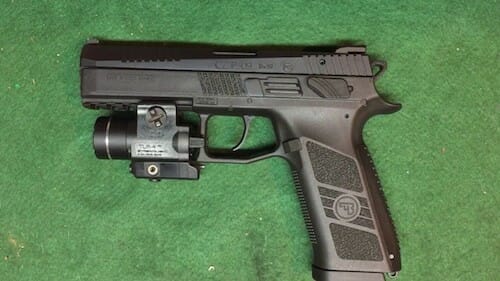 Nonetheless, exceptions do occur. The Beretta Px4, for instance, is a DA/SA hammer-fired weapon like the P09, and the Walther P99 is a striker-fired DA/SA duty pistol.

So really, the P09 is not all that unique, at least not in terms of the type of weapon that it is. Nonetheless, offered at a price point of just around $499, the CZ P09 is highly competitive when it comes to cost, and this combined with the fact that CZ is known for making excellent pistols means that the P09 is definitely a viable option for home defense, duty use, target shooting, concealed carry (if you want to carry a full-size duty pistol), or as a sidearm to have at your hip during an SHTF disaster.

Features and Pros of the CZ P09

As has already been noted, the CZ P09 is a DA/SA polymer frame pistol with a 19+1 standard capacity in the flush-fitting magazine. However, you can also get larger magazines with an extended baseplate that hold 21+1 rounds. 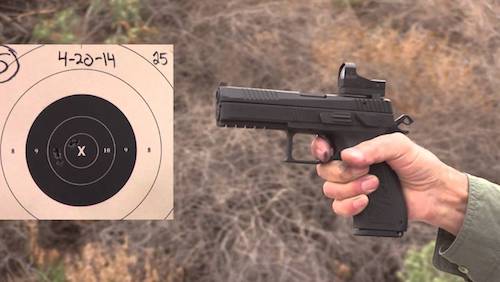 This means that the P09 has one of the largest magazine capacities of any 9mm semi-automatic pistol on the market, most of which have 15-17 rounds in total.

Let’s talk about the DA/SA operation if the P09 for a second. First of all, yes, it does have a decocker and firing pin block so you can safely lower the hammer without having to do it yourself manually.

In addition, the DA/SA has a MAJOR advantage over most striker-fired pistols such as Glocks or M&Ps, and that is that it has double restrike capability. With any normal striker-fired pistol, if you fire the gun with a round in the chamber and nothing happens, you’ll have to rack the slide to eject the failed round and then rechamber another round in an attempt to get it to fire again.

With a DA/SA auto such as the P09, however, you can instead just pull the trigger again so the firing pin hits the primer again, which may or may cause it to go off. This could be a lifesaver in any defensive scenario where your gun fails to fire, but you don’t have another hand free to fire the weapon since you can just pull the trigger again instead (and hopefully, in that case, it will fire).

The barrel of the P09 measures 4.5 inches and is cold hammer-forged. The pistol also incorporates the Omega barrel design of the CZ 75.

The P09, although already essentially being a variant of the CZ 75, is also available in a wide variety of different models. 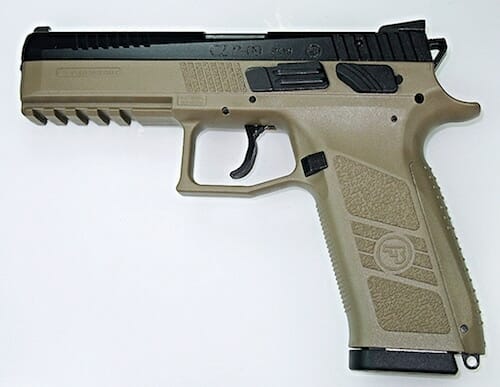 The base model sports a blued slide with a black frame. The suppressor-ready model is practically the same exact gun; only it sports a grey frame with raised sights and a threaded barrel so it can add a suppressor. Another variant sports the flat dark earth frame with factory night sights.

The grip of the P09 is designed to be as ergonomic as possible, and to this end, it sports aggressive checkering on the sides of the grips. Staying true to the CZ75, CZ engineers worked hard at ensuring that the P09 has a natural grip angle.

The bottom of the frame sports a Picatinny rail for adding lights and lasers, which is absolutely an essential feature to have in this day and age.

Another big benefit to the P09 is its beveled magazine well, which makes inserting a fresh magazine much easier and smoother.

The P09 is a great gun from CZ, but is it a flawless gun? Hardly. 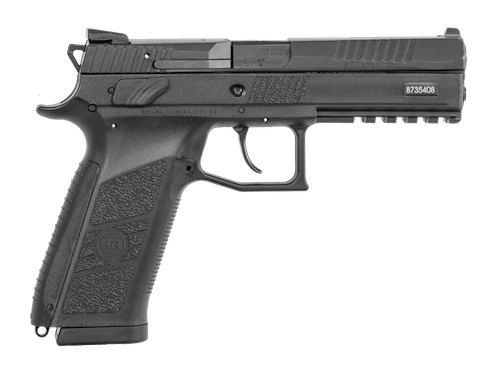 Those magazines may hold 19 or 21 rounds of ammunition, but guess what, they’re also extraordinarily expensive, and you can expect to pay nearly $50 for a single one.

That’s a lot of money in contrast to the $20 to $30 that most other magazines are, and some magazines can be bought for closer to $10 depending on the make and model.

Another flaw of the P09, though it may be rectified in the future, is the lack of strong third party and aftermarket support. Spare parts, upgrades, or accessories such as holsters will simply be more difficult to find for the P09 in contrast to many other more popular guns.

While very similar, there are a few noticeable differences between the CZ P09 and the CZ 75. The CZ P09 is a more modern sized weapon and is not considered full-size. This makes it easy to handle, especially when it is being fired for longer periods of time. The other difference is that it is chambered in 9mm.

The barrel of the P09 is hammer forged and measures in at 4.5-inches. It is also available in a variety of different models, including the base model with a blued side and a black frame.

The CZ P09 is a pistol designed first and foremost for duty use, specifically in the hands of military soldiers or law enforcement officers. 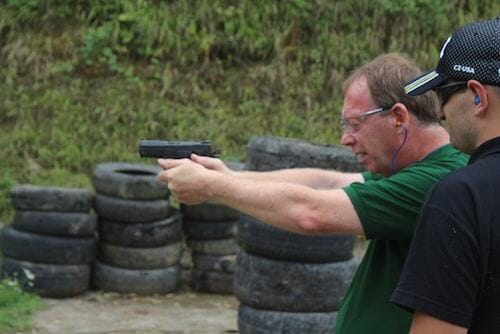 For the ordinary civilian, however, the P09 would be an excellent choice for home defense thanks to its larger size that tames recoil, light single-action trigger for faster follow up shots, and large magazine capacity.

The ability to mount a light onto the P09 thanks to its Picatinny rail is also a major plus for home defense, as a strong case can be made that a light mounted onto your firearm is a necessity for any home defense pistol.

The P09 may be a bit too big for concealed carry, at least for most people, but CZ also does make a more compact version called the P07, which is roughly the same size as a Glock 19.

A Look at the Rating

Now let’s take a quick look at how this gun rates in a few different categories:

For an affordable gun, it offers a lot of accuracy at 25 yards. In addition to its accuracy, it is also easy to shoot off-hand.

When scoring ergonomics, the C09 scored highly because it has the adjustable backstraps. In addition to the backstrap, its grip shape, angle, the grip texture, control placement, and trigger shape and placement are all ideal.

It also scores very highly in the reliability category, and this is after it has been through test after test to ensure that it can boast of this.

This is where this gun begins to falter on the rating scale. There is not much aftermarket support you can get for this particular gun. However, you can find different holster options and an accessory rail. When customizing, it will need some work to ensure that it remains both reliable and accurate.

And again, we see high marks in utility. It is a good choice if you are looking for a gun for home self-defense, competition, or just for practice at the range. However, because of its full size, it is hard to carry concealed.

To conclude, the P09 is an evolved CZ75 with a lighter polymer frame and a lot of firepower. 19+1 or 21+1 rounds of 9mm is an impressive number of bullets no matter how you slice it.

As a concealed carry weapon, the CZ P09 may be too big. But as a duty sidearm, it’s an excellent option and will shine in the role.

CZ, as a whole, is a company that is too often overlooked here in the United States. From the CZ75 to the P09 to the P07 and, most recently, the striker-fired P10C. They truly do deserve more attention, as their pistols are among the finest in the world, and the P09 is certainly no exception.

Still, have questions? Read through our FAQ below.

WHAT DOES CS FIREARMS STAND FOR?

It stands for Czech Armory, and most CZ marked firearms are connected with a Czech firearms manufacturer that was founded in 1936. CZ is also a registered trademark.

WHAT IS THE BEST CZ 75 VARIANT?

The CZ P09 is considered one of the best CZ 75 variants because of their many similarities. A lot of the aspects of the CZ 75 came from the Browning Hi-Power, including the short recoil locked breech firing mechanism. The CZ P09 is a full-size polymer offering that is unsurpassed by any other 9mm duty pistol.

DOES THIS GUN COME WITH 2 19 ROUND MAGAZINES?

Yes. The CZ pistol does come with two 19-round magazines, which makes it an appealing option for gun owners. It has a flush-fitting magazine, versatile Omega trigger system, and is shipped with decockers already installed.

WHY SHOULD I OWN CZ HANDGUNS?

A CZ is a good choice when it comes to handguns. They are also the ideal gun for someone who may be new to shooting. They are reliable and safe and allow for better accuracy and precision.