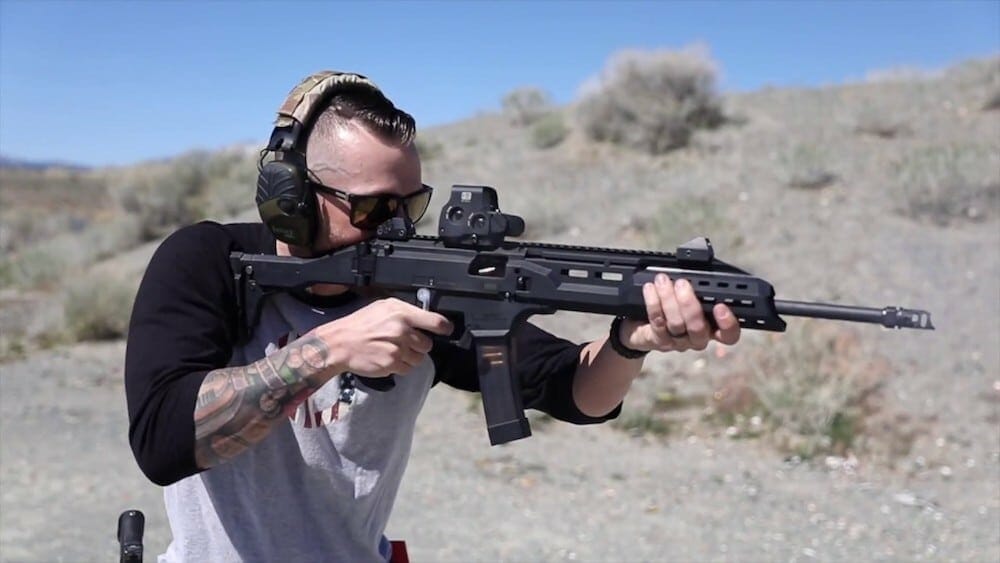 Want A 9mm Carbine? Try Any Of These 6 Best

Having both a 9mm pistol and carbine always give you one very distinctive advantage: you’ll only need to use one caliber.

True, a pistol caliber carbine of any kind is not going to have near the range as a rifle. But there is one very distinctive advantage to a 9mm carbine, and that is that if your pistol is also chambered for 9mm you only need one kind of ammunition.

Furthermore, a 9mm carbine would be an excellent choice for a home defense weapon. It’s short, light, very wieldy in tight environments, has plenty of firepower, and recoil is also very limited.

Even better is if you can use a carbine that accepts the same magazines as your pistol; that makes your carbine even more practical and convenient.

Here are the best 9mm carbines, presented in alphabetical order:

The Cx4 9mm carbine from Beretta is chambered for the 9mm Luger and is also designed to accept Beretta magazines from either the 92FS or the Px4 pistol, depending on what model of the Cx4 you get.

This means that the Cx4 does NOT accept magazines from both the 92FS and the Cx4 at the same time. It depends on which specific model you choose to go with, as it will accept either the Px4 or the 92FS magazines depending on the model.

Still, the 92FS is a very popular pistol, and if you already own the 92 and get a Cx4, you’ll only need one type of magazine in addition to only one type of ammunition. The Cx4 will accept the shorter 15 round magazines of the 92FS, or it will accept longer 20 round to 30 round magazines as well. The same goes for the model of the Cx4 that accepts the Px4 magazines.

Aside from that, the Cx4 comes with a number of important features, including a Picatinny rail for mounting lights and accessories. The Picatinny rail is located underneath the barrel of the gun.

The rifle is also incredibly ergonomic and comfortable to wield. The components are also all ambidextrous, which is also cool.

Finally, there are also .40 S&W and .45 ACP versions of the carbine as well, although they are far less common. There are two .40 S&W models, one of which accepts 96 magazines and the other accept Px4 magazines. The .45 ACP version only accept Px4 .45 magazines, but there currently is no 92 model chambered for the .45 ACP round.

The 3S1 Scorpion Carbine from CZ USA is today considered to be one of the best 9mm carbines on the market. The magazine holds 20 rounds of 9mm.

CZ designed this weapon primarily for self defense and home defense. To this end, it has excellent sights, a very light and crisp trigger, and fully ambidextrous controls. Furthermore, the trigger is even adjustable so you can make it lighter or heavier to your liking.

Another big feature of the CZ USA Scorpion is the various M-LOK attachment points throughout the weapon, which makes it very customizable and easy to add accessories.

When you first look at the HK USC, you’ll notice right away that it closely resembles the HK UMP submachine gun, only with a longer barrel so it’s fully legal for all civilians to own in the United States.

The USC is only chambered for the .45 ACP round, unlike the UMP, which is available in 9mm, .40 S&W, and .45 ACP. The standard magazine capacity holds 10 rounds.

The USC has also been noted by many people for its short length, limited weight of just six pounds, and reliability. It also comes with a variety of attachment points across the carbine a well, that makes it easy to add lights, optics, lasers, slings, and other attachments.

HK didn’t just design the USC as a civilian UMP, but also as a home defense weapon. The weapon is further designed to be put through hard use, as it is build primarily out of a corrosion free polymer material.

If you are looking for a short, lightweight, and dependable 9mm carbine, the Kel-Tec Sub 2000 9mm carbine will be a great choice.

Two things notable about the Kel-Tec Sub 2000 are its reliability and its accuracy for a 9mm carbine. These are just two of the reasons why this pistol is such in high demand.

Another notable feature about this weapon is the very minimalistic appearance and design, as well as the fact that it can fold up to be just 16 inches long for easier storage. Total weight of this gun is just four pounds, which makes it one of the lightest carbines on the market today.

The Ruger PC9  Carbine is one of the more recent 9mm carbines, and is chambered for either the 9mm or .40 S&W calibers.

This carbine was actually designed for police use, as an alternative to a shotgun or semi-automatic rifle such as the AR-15. It is a very traditionally designed carbine that sports a push button safety located behind the trigger guard.

The SIG Sauer MPX Carbine is a 9mm carbine that holds a whopping 30 rounds in the magazine. This is definitely one of the more unconventional carbines on the market, but it’s also very reliable and comes with the quality and reliability that SIG Sauer is very well known for.

SIG also designed this carbine to be used in the most harsh of environments. To this end, it is very durably made with a corrosion and rust resistant finish. The weapon is also fully ambidextrous and can accommodate both right handed and left handed shooters. The charging handle, bolt release, magazine release, and selector switch are examples of controls that are all dual sided.

The MPX also comes with a Picatinny rail, which SIG intended to be used for mounting targeting lasers and optics. It also has a full length key MOD handguard. The barrel measures sixteen inches, to create a long sight radius and plenty of velocity for each 9mm bullet sent down the barrel.