The .44 Magnum is a powerful revolver cartridge. It was initially developed to be a more potent load of the .44 S&W Special, its parent cartridge, by Elmer Keith in 1955.

Made largely popular by Clint Eastwood in his 1971 movie “Dirty Harry”, it has enjoyed a well-deserved reputation among law enforcers, hunters and sporting arms enthusiasts. Because of its popularity, ammo availability has never been an issue. For a hunting round, it isn’t too expensive, typically costing only $69.99 per box of 50, or $1.33 per round.

Since the .44 Magnum is a revolver cartridge, there are a ton of revolver options on the market for this round.

And because it is designed primarily as a hunting round (i.e. not really a defensive round, unless we’re talking big two-legged critters like bears), it doesn’t have to be loaded in a smaller weapon.

Thus, for guns chambered in this cartridge, a smaller size shouldn’t be a consideration. You’re not buying a CCW piece.

Quite the opposite, it would make a lot more sense to get a revolver with at least 6 inches minimum barrel length. The longer barrel makes a gun heavier, and the weight of the 6-inch revolver will tame the recoil better compared to that of a lighter, shorter barrel revolver.

Shooting the powerful .44 Magnum out of a heavier revolver will be easier on the hands, not to mention the longer barrel will have a longer sight radius, making it more accurate over longer distances. Weapon handling would be much easier too, because the longer barrel makes the gun front-heavy, giving it better balance.

As far as ballistics, when fired from a 6-inch barrel revolver, a heavy 240-grain .44 Magnum bullet can reach speeds of up to 1,380 feet per second, generating kinetic energy at the muzzle of 1,015 foot-pounds of force. That’s plenty of power, enough to take down up to deer-size game at distances of up to 50 yards.

Even better, there are revolvers with barrels ~7, ~8 or even ~10 inches long. The top three US revolver manufacturers produce these longer .44 Magnum revolvers, with Taurus often offering the lowest prices, Smith and Wesson offering the highest, and Ruger pricing their revolvers somewhere in between the two. 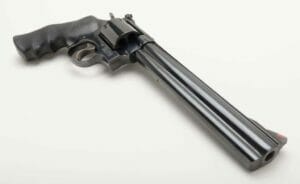 Fired from an 8.375-inch revolver, the same 240-grain .44 magnum bullet can reach even higher velocities of up to 1,500 feet per second, generating relatively more muzzle energy, up to 1,199 foot-pounds of force. That should be enough to take down bear-size game at distances of up to 30 yards.

The reason why the .44 Magnum round gets slightly higher velocities and generates more muzzle energy out of an 8.375-inch barrel revolver (only 2 inches longer than standard hunting revolver barrel lengths) is because the longer barrel length gives the slow-burning powder (the type of powder charge typical big-bore magnum revolver rounds typically use) more time to burn. It also gives the bullet more time to accelerate before it exits the barrel.

In any firearm, as soon as the bullet exits the barrel, gravity immediately acts upon it, reducing its speed. Thus, in general, the longer a bullet spends time inside the barrel, the more time it has to accelerate from the pressures caused by the combustion of the powder charge from the cartridge.

So the longer barrel revolver options are great. But as revolvers, they have an inherent disadvantage due to their design.

Because revolvers utilize a cylinder with separate chambers for individual cartridges, upon propulsion the bullet has to be “forced” into the bore of the barrel by the revolver’s forcing cone. This results in velocity loss, not to mention the almost deafening loud noise.

There are certain considerations to be made when choosing to carry a revolver-caliber rifle as opposed to carrying a revolver when hunting.

The first consideration is the price. On average, a good lever-action revolver-caliber rifle (or carbine, a rifle with a relatively shorter barrel) will cost anywhere from $800 up to $2,000 depending on brand, make and model. Depending on your budget, there are a lot of options to choose from.

Some of the more popular ones are Henry Repeating Arms‘ Big Boy rifles that can be chambered for an assortment of revolver cartridges from the .327 Federal Magnum all the way up to the fat .45 Long Colt. The Big Boy chambered for the .44 Magnum rifle, which can also shoot weaker .44 Special rounds for target practice, costs only $900 brand new.

The most expensive option that I’ve seen so far is the Navy Arms Winchester 1892 Lever Action Rifle that goes for $2,132.90 on Cheaper Than Dirt. It’s an improved version of the famous Winchester Model 1886 designed by John Moses Browning from days of yore.

There are more affordable rifle options like the Rossi Circuit Judge in .44 Magnum, an SA-DA (single-action and double-action trigger) revolver carbine. But it negates one huge advantage rifles have over revolvers because it uses the same 6-round chamber and the same forcing cone found in revolvers.

Then there are semi-auto .44 Magnum rifles Ruger used to manufacture, the most recent model being the Ruger Deerfield carbine, but production was stopped in 2006 because of its high price, not to mention it only holds 4 rounds in its rotary magazine.

The next consideration is size. Being inherently longer by virtue of its stock and barrel length, a rifle won’t be as easy to point, aim and shoot as a revolver. It’ll also be relatively more cumbersome than a revolver for animal defense scenarios where a charging bear is only 10 yards away. 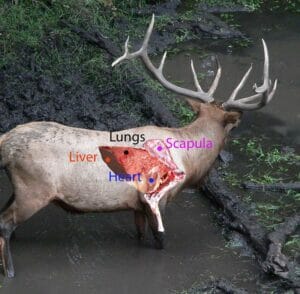 Another consideration is the length of time it takes to reload. Revolvers can use speedloaders while most .44 Magnum lever-action rifles can fit up to 10 rounds in their tubular magazine.

Not that it would matter too much when hunting where often, assuming you’re facing the animal’s broadside, a single hardcast semi-wadcutter 240-grain bullet in the lungs will be more than enough for a quick humane kill.

But considering the bear defense scenario above, if you have to face two charging bears from 10 yards away and you unfortunately don’t have enough ammo in your rifle’s tubular mag to take them down, you’ll be at a real disadvantage if you have to reload one round at a time — if you’re carrying a magnum revolver with speedloaders this shouldn’t be too big of an issue. 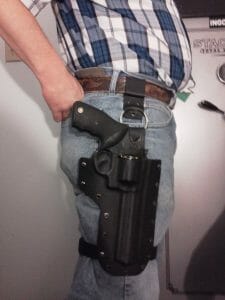 Lastly, there is the rifle’s heavier weight to consider, although depending on where you stand in the argument, this can be considered an advantage rifles have over handguns.

Since rifles are heavier, you’ll have to carry one over your shoulder with a sling, and even then you’ll feel sore hours of carrying it that way.

The shorter 6-inch revolver can be easily carried in a shoulder holster like this generic one from Amazon and won’t be as punishing even when carried for hours.

An even longer 9-inch barrel revolver can be carried in a leg holster like the New Barsony Tactical without too much effort.

But on the plus side, the heavier rifle will be much more controllable because its weight will soak up more recoil better than any .44 Magnum revolver. If that’s not enough, recoil pads can be installed on its stock for lighter felt recoil and better recoil control.

Further on the rifle stocks bit — with .44 Magnum revolvers that have a mounted scope, it’ll be a lot harder to aim through it because you have to hold it with both hands an arm’s length away from your eyes.

With rifles, not only does the butt of stock let you handle recoil better by distributing recoil forces evenly on your firing shoulder, it also allows for a better aiming stance because you can naturally rest your cheek on the stock.

A scope mounted on a rifle lets you peer through the lens easier because it’s closer to your dominant eye as you rest your cheek on the stock. This will never be the case with any revolver that has a scope mounted to it (unless it’s a revolver rifle, like the Rossi Circuit Judge briefly mentioned above). 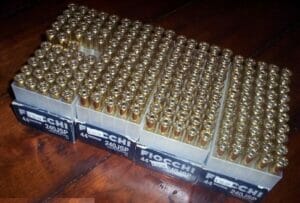 Another reason why it makes sense to get a rifle or carbine in .44 Magnum is, if you already happen to own a revolver chambered for this cartridge, then you won’t have to buy different ammo.

That means you’ll only have to make a single trip to your favorite ammo dealer to get ammo for both your rifle and revolver. And as already mentioned earlier, the .44 Magnum cartridge can be cheap to shoot. You’ll just have to know where to look. 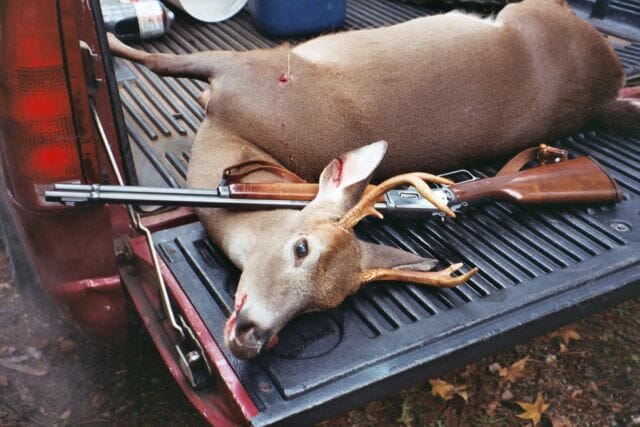 Perhaps the best thing .44 Magnum rifles have going for them is the fact that their longer barrel can push the .44 Magnum cartridge to higher levels of ballistics and terminal performance way beyond its potential when fired from any longer barrel revolver.

And since rifles don’t use a forcing cone that is separate from its chamber, there is no bullet velocity loss when shooting it.

When fired from the 20-inch barrel of a lever-action rifle, a 240-grain .44 Magnum bullet can reach velocities of up to 1,760 feet per second, 27.54% faster than when the same bullet is shot from a 6-inch revolver.

The same round generates a kinetic energy of up 1,651 foot-pounds of force at the rifle’s muzzle. This makes it 62.66% more powerful compared to shooting it from a 6-inch revolver.

The longer rifle barrel doesn’t use the forcing cone found in a revolver, which means there’s no velocity loss. This makes any .44 Magnum rifle a viable option for long range deer hunting at over 70 yards away.

Rifles, by virtue of their longer barrel, can push any cartridge to its maximum ballistics potential. A rifle chambered for a particular revolver cartridge like the .44 Magnum is always going to be more accurate than its revolver counterpart and easier to handle, not to mention it gives the cartridge more oomph.

The .44 Magnum has always been one of the more powerful and versatile revolver cartridges on the market. But often, hunting medium game with a revolver can be difficult because of its limited range.

If you happen to own a .44 Magnum revolver it and you’re looking to hunt deer from farther than what your revolver allows, i.e. over 50 yards away, it make perfect sense to get a carbine that can shoot the same round. Thanks for reading guys and remember to stay safe and protect your ears when shooting.