For those who don’t know, Trijicon, Inc. is a Michigan-based company that has specialized in superior any-light aiming systems since 1981. While the Trijicon name may be most widely associated with the 2010 controversy over their scopes’ New Testament bible inscriptions, it endures to this day as a brand of excellence thanks to their commitment to “the science of Brilliant ®” and American innovation.

They have a long standing relationship with law enforcement, military agencies and competitive shooters. Their optics have a range of applications including hunting, ranges and personal protection.

Trijicon offers a vast array of mounts, accessories, tactical apparel and more. But today we’ll look at each of their optics to give you an exploded view of why they’re so awesome and which scopes are the best scopes for you. After you read this, I trust you’ll find the perfect scope to suit any shooting scenario.

Let’s jump into it.

I think you’ll agree that AR-15s are becoming one of the most popular options among avid hunters and competitive shooters. In terms of tactical rifles, it’s at the top of the heap.

As with all firearms, an assault rifle is only truly a precision rifle when you’ve got proper sights. Trijicon scopes are among the best scopes for AR-15s.

Trijicon’s ACOG ® Ballistic Reticle Scopes are some of the most advanced scopes around. Built to precise U.S. Special Ops specifications, ACOG ® scopes are definitely pricey at around $1,145, but when you see the action you’ll get out of them, you’ll know they were worth the price of admission. 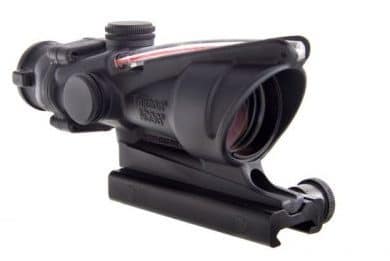 With fiber-optic and tritium illumination, ACOG ® models provide optimal clarity and shock resistance with battery-free adjustability. The choice is yours when it comes to ACOG ® scopes too. There’s the 4×32 USMC Rifle Combat Optic, the 3.5×35 scope with green horseshoe with TA51 mount, the 4×32 BAC Rifle Combat Optic with thumbscrew mount, etc.

No matter which one you go with, these dual-illuminated reticles will not let you down. You might be skeptical when you see the price tag on these babies, but in my experience this one is a sound investment. I’ve used it for coyote hunting and I couldn’t have been more pleased with the results.

The magnification is insane and the adjustability is super-convenient. The rugged, minimalist design is matched by its magnificent durability and value for those with an astigmatism. In the past, I’ve had serious problems with other scopes because of my astigmatism, even suffering bad headaches after using them. This was not the case with the ACOG scope I picked up late last year.

As Trijicon would say, this one is simply “brilliant.”

As Trijicon themselves put it, “There’s night vision. Then there’s Trijicon ® Thermal Night Vision.” Via thermal imaging, Trijicon has flipped the script on what was possible where night shooting is concerned. Whether it’s weapon sights, clip-on sights, thermal imaging monoculars or helmet sights, they’re leading the industry in advanced technology.

The scope from Trijicon’s Electro Optics Division that should be of most interest to our readers is the IR-Hunter Thermal Scope. It’s the ideal scope for hunters as it enables the user to spot big game in pitch black conditions.

When I tested out the IR-Hunter MK3 60mm model, I was astonished at the level of clarity and accuracy I was able to obtain. Before I’d even mounted it on my rifle, I marveled at the packaging.

The box is as badass as the scope it contains. It looks like something straight out of a Sylvester Stallone movie and I’m not surprised. It could easily end up in The Expendables movies given its sexy design and reputation for impressive performance.

When I utilized its 4.5X optical zoom, I was able to zero in on a boar in the dead of night and take it out as easily as taking a bag of trash to the curb. Easier, in fact, as the streetlight in front of my house often goes out before I reach the end of the driveway and I’m not in the habit of wearing night vision glasses when going to my garbage can.

With the IR-Hunter, you get all the bells and whistles you should want out of a scope, including a detachable eye-piece with integrated dust cover, a lens pen, an interface cable and software loaded onto USB. It’s the ultimate user-friendly night scope, coming as it does with a comprehensible instruction manual and reference guide.

The bonus here is the battery extender that enables those with CR123A batteries to achieve extended shooting sessions without concern for drain or anything like that. Again, brilliant.

Other night vision options include the REAP-IR, the SNIPE-IR and the IR-PATROL. The latter is a quality thermal monocular while the former is a slick thermal clip-on. All of these may be great if you’re intending on venturing out into the wilderness late at night to fell some ferocious but elusive beasties.

Another incredible option for the sporting crowd is Trijicon’s AccuPoint ® rifle scope. Unlike the AR-Hunter, the AccuPoint ® is a battery-free illuminated reticle. It’s variable-powered and features a second focal plane.

A lot of shooters turn to the AccuPoint as an alternative to red dot sights and similar sights because it bests red dot magnification in every way possible. For starters, it’s designed for rough use. The AccuPoint holds up in rugged situations and can take wear and tear without breaking down on you.

The eye relief on this thing is spectacular. You can get a clean shot without your eye being precisely aligned behind the optic and will serve you well in any position. With AccuPoint, you get a functional sight picture regardless of where you are or what position you’re in and you get it fast.

Thanks to Trijicon’s utilization of both fiber optics and tritium, the reticle is always on. You always get consistent brightness and clarity, regardless of whether the rotating cover is open or mostly closed. Have I said brilliant? Because, yeah, that’s what this is.

I hadn’t yet encountered TARS when I told you about some of my favorite long range scopes, but I can tell you now, this one crushes the competition. It’s powered by a single battery and has three stadia arms that leave the top half of the field of view open.

This one is ultra-reliable and is actually much cheaper than many other optics with this kind of dependability and accuracy. It doesn’t hurt that it’s also got an aircraft-grade aluminum body that’s waterproof.

Initially intended for use by law enforcement and military personnel, the TARS’ reticle is in the first focal plane, ensuring consistent subtension no matter what mag setting it’s on. With no less than 10 LED illumination settings, you can bet your butt you’re going to be able to take this one to the limit, regardless of where or when you’re pressing it into action.

is the next one on my list, but it’s hardly a lesser option than those listed above. On the contrary, it’s every bit as incredible. This Variable Combat Optical Gunsight offers insane durability and seemingly unreal glass quality.

The first time I saw one, I couldn’t believe the clarity. Like the TARS, the VCOG ® has a first focal plane reticle, but this one’s a bit different. The reticle is bullet drop compensating and ranging.

With this one, there’s no need for ring mounts and the entire build is remarkably constructed. Whereas other optics aren’t great during daylight hours, the illumination you get with VCOG ® won’t let you down if you’re hunting in the morning or early-afternoon hours.

The only drawbacks here are the price and the weight. At $2,000, it’s significantly more expensive than most viable scopes and it’s a tad heavier than an ACOG. But it makes up for that with superior eye relief and a twin-screw mounting system that takes the headache out of connecting the scope to your rifle’s Picatinny rail.

The segmented circle is tightly centered for red dot use and can be calibrated for .300 blackout which appeals to many avid shooters who like their rounds to pack some serious punch.

Trijicon also offers another magnified optic in the form of AccuPower, but I can’t say I’m a fan. Although it shares some of the other optics’ features, such as the corrosion-proof aluminum body and versatile adjustments for windage and elevation, it kind of sucks when it comes to water-resistance.

Whereas other Trijicon scopes are waterproof to 60 ft, the AccuPower is only waterproof to 10 ft. That’s a substantial difference when you really think about it. What’s worse, it doesn’t handle nearly as well as any of their other scopes in daylight.

In short, you don’t want to take this one to the swamps, especially if it’s during the day. Other than that, you could do much worse with similar models from other companies. For one, it maintains a flat, clear image at all powers and possesses the same durable construction of other Trijicon products.

Trijicon’s line of reflex sights are another attractive option for the avid shooter. These optics make anything that’s in the lens look like it’s right in front of you.

Their MGRS is the perfect addition to any machine gun, providing rapid target acquisition without the shooter having to shut one of their eyes. The interchangeable range dials improve accuracy and the rugged forged aluminum housing ensures longevity.

The thing I dig most about these particular reflex sights are their large objective lenses. It’s like you’re seeing your target as a mini-movie through the scope, making it easy to achieve a pinpoint shot.

As with the AccuPower, I’m not so hot on the waterproof level, but there’s really nothing else bad I can say about this one. From its accessible battery compartment to its ergonomic elevation adjustments, it’s a true marvel.

If you own a shotgun or a Carbine, Trijicon’s still got you covered in this department. Their MRO (Miniature Rifle Optic) is a sealed sight that can be affixed to any shotgun, Carbine or standard long rifle.

Among the things that most shooters look for in any firearm or firearm accessory is dual capability. By that, I mean parts that can serve lefties as well as righties. The MRO has that in spades. It’s got ambidextrous brightness control and easy-to-use adjusters.

So I’ve been harping on the waterproof thing, but I can’t say anything but good things about this sight because it’s waterproof to a whopping 100 ft.

Finally, we have the SRS ® which comes with snag free button pads and a hybrid illuminated reticle. What I like about this one the most is the power. It’s powered by a solar cell which drives its 10 distinct lighting settings.

When it comes to durability, you’re not going to find many other sights that can keep up with this one. I’ve tested it out in the worst possible conditions and it’s survived them all. Whether you drop it in mud, bury it in snow or leave it out in the sun, it stands up to the abuse you hoist upon it. Nothing can really beat this little beast.

Trijicon has other reflex sights like the RMR ® Type 2, but I won’t mention them here as I have no hands on experience with them and don’t want to make assumptions about their pros and cons. I will say this: If the scopes I’ve listed above are any indication then Trijicon’s other sights are no doubt formidable optics.